It’s been almost three years since famed bullet-hell shooter developer Cave released their last in-house iOS game in the genre they became well-known for. At the time of the company’s restructuring, I was worried about the future of shoot-em-ups on mobile, and I doubt I was the only one. Luckily for mobile gamers, it turned out to be a non-issue, as we’ve seen several excellent releases in the genre, some of which have arguably been better than even Cave’s offerings. One such game is .Decluster – Into The Bullet Hell (Free), an out-of-nowhere release from Japanese indie developer Masayuki Ito. It combined a simple but eye-catching visual style with enjoyable scoring mechanics and exciting enemy patterns to create a thrilling take on a well-worn concept.

That game released in March of this year, but we’ve already got another .Decluster on deck. .Decluster Zero – Bullet Nocturne ($4.99) functions sort of like the Black Label versions of their games that Cave would occasionally release. It’s basically a remix of the original game, but it feels like calling that it does it a disservice. The scoring mechanics are totally overhauled, the basic gameplay rules have changed a bit, your ship has new capabilities, and the enemy patterns have all been adjusted to account for that. There are also tons of new options to play around with that the original version doesn’t have. For newcomers to the series, it’s an easy decision to pick this one up over the original. If you already own that one, however, you might be wondering what exactly makes this one worth the pick-up. 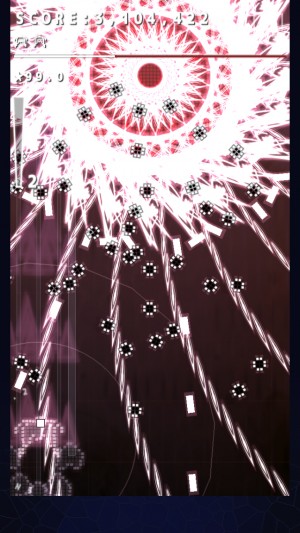 The most immediately noticeable change is that your ship is always fully powered-up. You can switch between the different types of weapons at any time by double-tapping. I think this is an excellent idea, both for the player and the designer. No, you don’t get the excitement of gradually powering up your ship, but that’s not really what bullet-hell shooters are about, in my opinion. Instead, they’re about white-knuckle battles with enemies flinging out a ridiculous amount of bullets where boss battles become wars of attrition. You weave and bob through whatever space you can find in the curtain of shots, trying to stay alive while optimizing your score.

If that’s what a bullet-hell shooter is about, then it makes perfect sense that the player should always be at full power. It lets the designer assume the player has what they need to win, letting them really cut loose with enemy layouts. From the player’s side, you don’t have to worry about scrambling to grab your power-ups after you die to try to reclaim enough power to continue. You’ll certainly never need to worry about resetting after a death, Gradius-style. The impact to the player’s score is more than enough penalty for dying.

Another major overhaul comes with the homing laser weapon, which is sort of the signature weapon of the game. In the first game, you could tap down with a second finger to activate your lasers, converting all nearby bullets into points. That still works here, but it has an extra effect. By holding down your second finger, all bullets that enter the area around your ship are slowed down. If you continue to hold down, they’ll change color from red to blue. Blue shots will convert to stars, raising your multiplier, and also turn into lasers themselves, giving you an extra kick of firepower. There’s a new way to charge the laser, too. Like before, you can fill up the meter by shooting enemies and collecting the items that they drop, but if that’s not doing it quickly enough for you, you can also manually charge it up. Of course, doing so requires you to stop shooting, which also means you’re not moving. I like how all of these changes ask the player to push their luck in order to get a great reward, giving a tangible benefit to risky, exciting play. 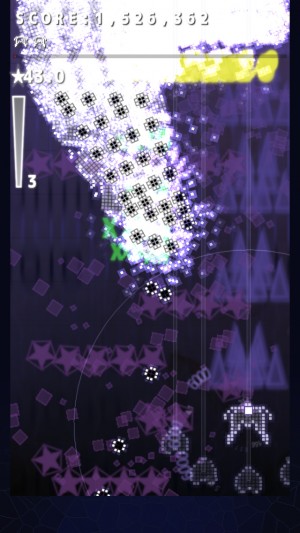 A big part of why the original game worked was in how meticulously the levels were designed to match your abilities. Given the new powers open to the player in Bullet Nocturne, it wouldn’t very well do to use the same stage layouts and enemy patterns. With that in mind, the developer has made tons of changes to every stage, resulting in a challenge that feels more different from the original it’s supposedly remixing than similar to it. Even if you played the original extensively, you’ll still find plenty of new tricks and surprises along the way here, and just like before, each difficulty level feels like its own beast. Naturally, the new content feels just as pixel-perfect in its staging as the old stuff did. I personally feel there’s more than enough here to justify buying in on it, but I suppose that’s going to depend heavily on how much you enjoyed the original .Decluster.

In addition to all of the gameplay changes, .Decluster Zero also sports a new soundtrack and some serious visual improvements. If you’ve got the hardware to manage it, you can play the game at high resolution, with tons of effects, and all at a silky-smooth framerate. If you don’t have the hardware, there are options you can play around with so that you can enjoy the game without sacrificing on speed. The detail with which you can mess around with things in the options is really impressive, especially compared to the first game. Naturally, Game Center leaderboards and achievements make a return, allowing you to compete against others to see who can get the best score.

Remix, follow-up, sequel, or whichever word you want to use, .Decluster Zero – Bullet Nocturne builds impressively on the original game. It increases the thrills by adding new systems to encourage the player to take risks, while maintaining the level of careful design that made the original such a stand-out. The slick visual improvements end up being the cherry on the top of an already-impressive sundae. That the developer has made such excellent gains on the amazing original title in just a handful of months is even more noteworthy. If you like shoot-em-ups, especially the bullet-hell variety, you might be feeling a bit well-fed already of late. I encourage you to make room for one more in your rotation, however, because .Decluster Zero is simply an outstanding bit of joy.