I think I could play shoot ’em ups until the day I die. It was one of the first genres I experienced in arcades outside of fighting games, and to this day, it’s by far the genre that I import the most. Ironically, Siberian Strike was one of the very first games I played on an iOS device as well — it’s in my blood. It’s good that Operation Dracula ($2.99), in spite of its cheesy presentation, is a solid showing.

The gist is that some time ago, the “Great Vampire War" saw four nations joining forces to defeat…Dracula…and now he’s threatening said nations once again. Yeah, that’s basically it, and the story bits have some misspelled words to boot. While the in-game bullet effects and enemy designs are endearing, everything outside of the engine (like the artwork) is a bit drab. But as many shmup fans know the story is often throwaway, and it’s the gameplay that truly counts. 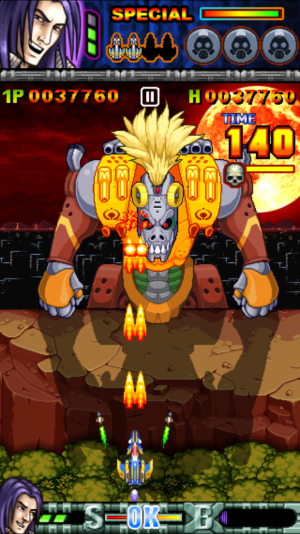 You’ll control the action just like most of the shooters on touch devices, by way of swiping in any direction to move your ship. A special weapon can be initiated by double-tapping when charged, basic shots are done automatically, and bombs have their own icon — that’s basically all you’ll need to know. Thankfully the developer shave also included MFi support, which is a godsend for games like this and something I wish more teams did in this current era of abundant MFi options.

Mechanically, Operation Dracula operates like many other games in the genre, but that’s not necessarily a bad thing. Special shots usually involve a bit of flare like a giant hyper beam of sorts, which can cancel out enemy bullets and give you a moment of respite while you plan your next move. Bombs of course are your ultimate means of offense, blasting the entire screen and doing massive damage to bosses.

You’ll need to pull out all the stops, because Operation is a tough game, even on the default difficulty setting. Bullet patterns will require you to actually pay attention, and although there is a health bar (no one-hit deaths), things can get really hectic — especially during bosses. Other nuances like power-ups and health pickups are scattered about the play area, adding even more chaos. Just like some old school shmups, extra lives can be earned from high scores, so there’s an incentive to defeat as many enemies as possible — there’s even combo points awarded for rapid destruction.

What I really like about Dracula (besides the fact that you’re buying the whole shebang without penny-pinching IAP), is that it’s fast and frantic throughout the entire game. It was fun enough to spur me to complete it three times with each character, which in turn unlocks a secret fourth ship. As I’ve hinted at multiple times already, it’s delightfully old school.

Any shmup fan owes it to themselves to check out Operation Dracula. Yes the setup is silly, but the visuals are top notch, and the core concepts are worth exploring for multiple playthroughs.