Here’s the thing: I love RPGs an awful lot, but there are plenty of times during my day where it would be somewhat futile to try to get anything done in bigger games. Yes, I could grind up a little, but that leads to my characters being overpowered, and that’s not much fun. So I’m always on the lookout for something a little bit lighter that still provides a nice, classic RPG punch. The latest game to occupy that role on my device has been Mazes Of Karradash ($0.99), a dungeon crawler that feels both classic and modern in different ways at once. It combines vintage first-person dungeon crawling and turn-based combat with a simplified gear system and a splash of roguelike elements to create an enjoyable challenge that doesn’t require a major commitment.

There is evil in the dungeon, and your job is to head into the depths and snuff it out. You will fail. The next generation will probably do better, but they’re also fairly certain to fail. Although you start the game with few options, being forced to play as a human fighter with the most meager of equipment, between the gold you gather and the relics you find in chests, you’ll find yourself more well-stocked with each attempt. The gold you collect can be used to improve the facilities in your town, which opens up new races, classes, and various buffs and bonuses. Relics come in different types, but by collecting a certain number of them, you’ll unlock a new piece of equipment you can use. Death is permanent in the sense that if you die in the dungeon, your run is finished along with that particular character, but your power will also be consistently moving up with every attempt. So if you’re looking for a nasty roguelike dungeon crawler, I’m sorry to say this isn’t it. 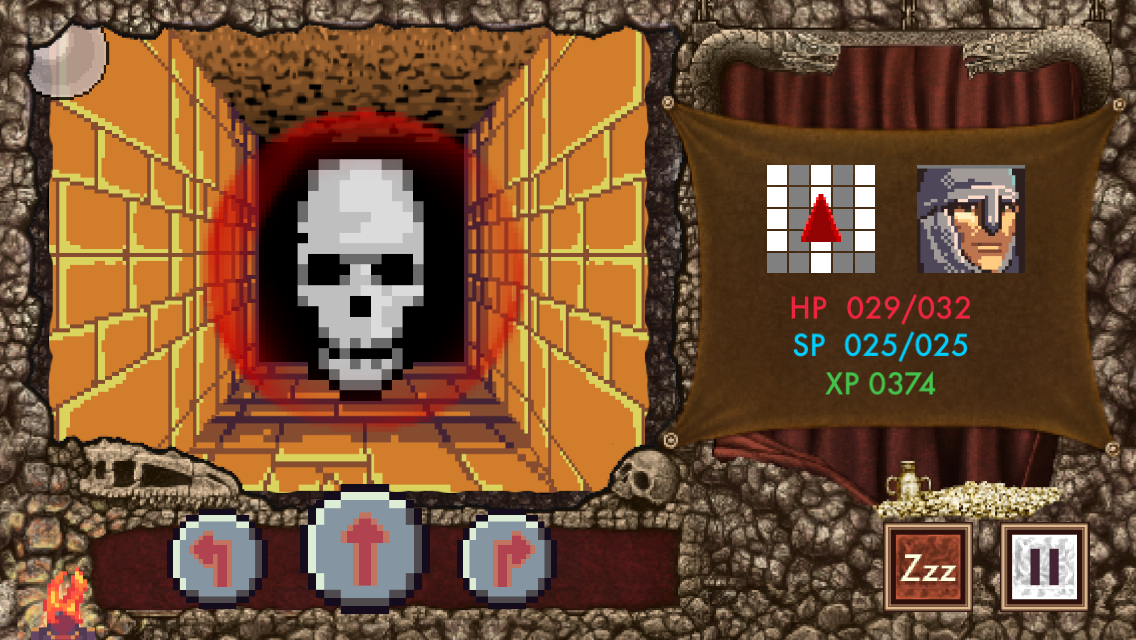 The dungeon layouts change with every attempt, though a few elements are usually in the same place each time. Once any character has bested a floor boss, you’ll never run into them again. Since the exits are typically in the same spot even if the routes to them change from round to round, it’s pretty easy to make a break for them once you’re familiar with a floor. Of course, once you’ve beaten a floor, you needn’t bother with it again at all if you’re so inclined. You’re able to immediately jump back to the floor you died on with your next character. You might not want to, since that character will start back at level one, but you can.

Combat happens randomly as you’re wandering about the dungeons. When you’re attacked, you enter a turn-based battle where you can attack, defend, use skills, or consume items. Aside from curative spells and items, your only means of refreshing yourself is by pitching a tent in the dungeon and resting. This carries a risk of being attacked, and a rather heavy one, at that, but it’s better than nothing, right? The bosses are visible on the field, so you won’t ever be blind-sided by an ultra-powerful enemy unless you advance floors too quickly. There’s not a ton of depth to the combat, but the variety of classes and skills at least keeps things fresh from game to game. 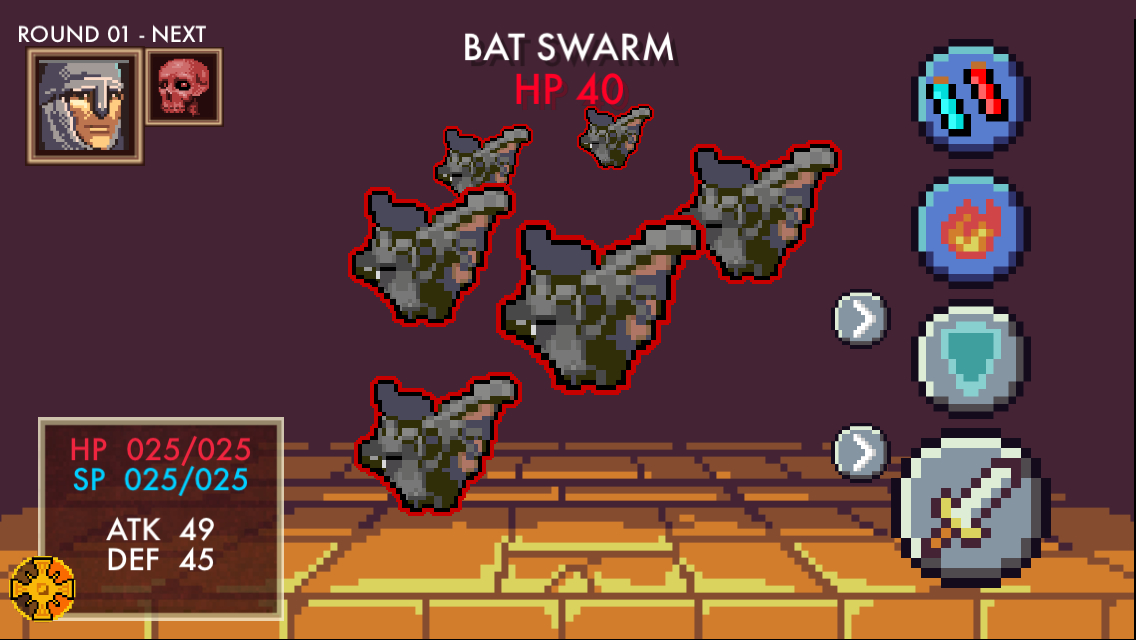 Naturally, it’s all a bit of a grind, especially once you get the cheap upgrades out of the way, but it’s a pleasant one. Sooner or later, your reach will exceed your grasp, and you’ll be back to the town to do a few upgrades before starting all over again. That continuous progress, combined with the fact that you can head back to the highest floor you’ve reached whenever you set out, means you never really feel like you wasted your time or energy on a run. Even if it’s only a few coins in your purse, you’re sure to come back with something useful. And whatever that may be, it will help you move a little bit farther on the next run. In total, you can unlock eight classes, eight races, and too many equipment upgrades to count, to say nothing of other improvements you can make in your town. The dungeon itself has 25 levels, and its constantly changing nature means that even if you beat it, you can still enjoy coming back for another go.

While its presentation isn’t going to take home any prizes for its variety, what’s here is pretty good. The visuals have a nice 16-bit feeling that calls back to one of my favorite eras of computer RPGs, and the soundtrack is a delightfully nostalgic bit of synth. Most Americans are probably going to associate that type of sound with SEGA’s Genesis, but computer gamers, particularly the Commodore faithful, will surely prick up their ears at the familiar instruments used to compose the music in Mazes Of Karradash. The UI isn’t quite so nice, though it’s almost as retro. You’ll have to use little arrows to move around in the maze, and menus and other things aren’t as apparent as you might hope. There’s also a little bit of loading time whenever you change areas or open your menu. Happily, the game will save your position if you need to quit in the middle of a journey. You’ll start right where you left off the next time you open the game. 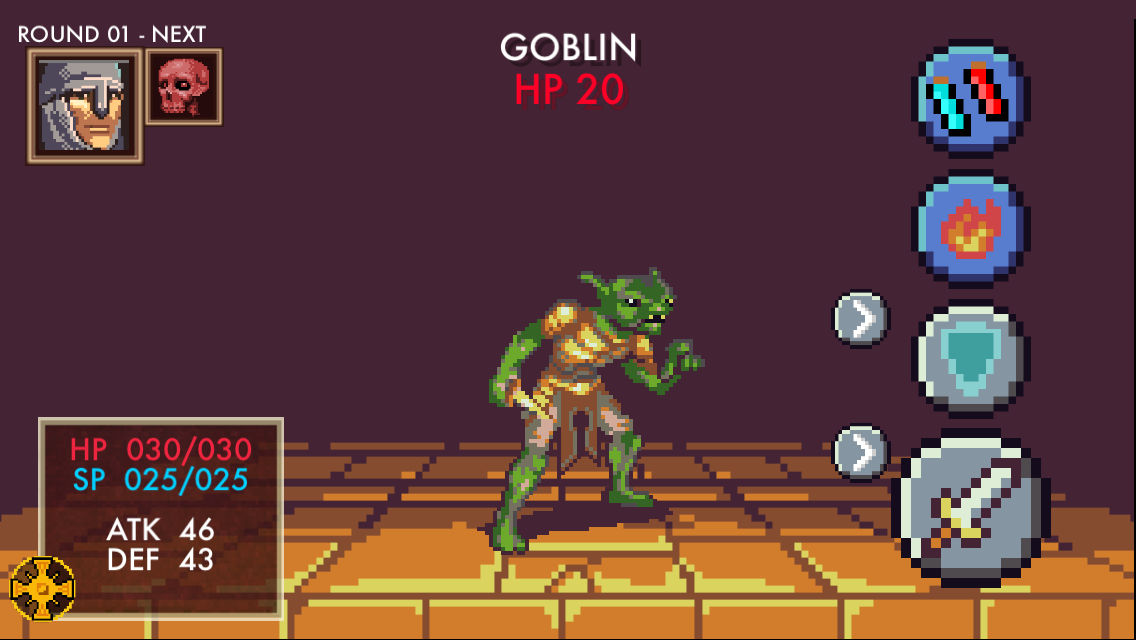 Not quite a main course but heftier than a snack, Mazes Of Karradash is a great little bit of adventuring that should slot nicely into any RPG fan’s busy schedule. It’s hard to separate where it’s being nostalgic on purpose and where it’s simply a matter of limited resources, but either way, the game makes a really good run with what it’s got. I appreciate that even though the developer could have easily skewed its balance and included IAP, what you see in Mazes is what you get. You’ll die, you’ll grind, and you’ll suffer some tragic runs of luck at times, but you won’t be able to blame any of that on the monetization system. Rather, it’s simply a somewhat gentle reminder of the crueler days of yesteryear, and that suits me just fine.