The TouchArcade Patreon continues to do really well. We stopped posting about it every day because we’re getting so close to our goal there doesn’t seem to be much point to be constantly reminding everyone. Either way, the Patreon has vastly exceeded our expectations, so from the absolute bottom of our hearts from everyone here at TouchArcade: Thank you, everyone involved. Hell, even if you’re not contributing to our Patreon but you’re still visiting the site every day, thanks for being a part of our community. Seriously, it’s so validating to be supported on this level, when we pour so much of ourselves into this web site. 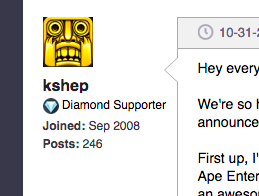 Better yet, we finally got all the forum stuff implemented. If you’re a Bronze or higher Patreon supporter, and you’re using the same email address with the forums as you are with Patreon, you should have appropriate forum flair. If you don’t, make sure you’ve got those things in sync, and let us know. Also, the process to import Patreon backers from Patreon to our forums is a little on the manual side right now, so if you’re a new backer and you don’t have your forums flair yet, that’s probably why.

Anyway, once again the fabulous guys at FDG Entertainment are our highest-tier backers, so we’d like to extend an extra thank you to them. They’ve got a new game coming out soon that I’ve been meaning to post about anyway because it looks really rad, but this gives me an opportunity to kill two birds with one stone! Take a look at the trailer:

It’s called Sketch Breaker, and it’s been in the works since the first concept was pitched all the way back in 2010. As you’ve probably gathered from the trailer, it’s sort of like a brick breaker, but instead you’re breaking up a painting by drawing your paddle with your finger. Lately I’ve been all about developers who take genres that have been done to death on the App Store and giving them a neat twist, so this definitely fits the bill.

Again, thanks so much to everyone, and if you’re not already- If you love TouchArcade or appreciate anything that we do around here, consider flipping us a couple bucks a month to keep doing it. The best rationalization I’ve seen so far of someone supporting our Patreon is comparing it to what you used to spend on video game magazines, except we’re pumping out content daily. So, yeah…