Angry Birds 2 (Free) is finally out in the world, which is kind of ironic considering there have been at least a dozen Angry Birds games released over the years. However, this one really does feel like a sequel. Rovio has definitely shaken up the tried and true Angry Birds formula this time around, in some ways for the better and in some ways for worse. One of the changes I hear talked about negatively a lot is how each level in Angry Birds 2 is randomly generated, meaning it’s slightly different each time you play. Not drastically different mind you; the basic level layout remains the same but the pig structures are setup in a slightly different manner, the pigs themselves are often in different locations on those structures, and your lineup of available birds is shuffled. Here’s an example of what I mean. 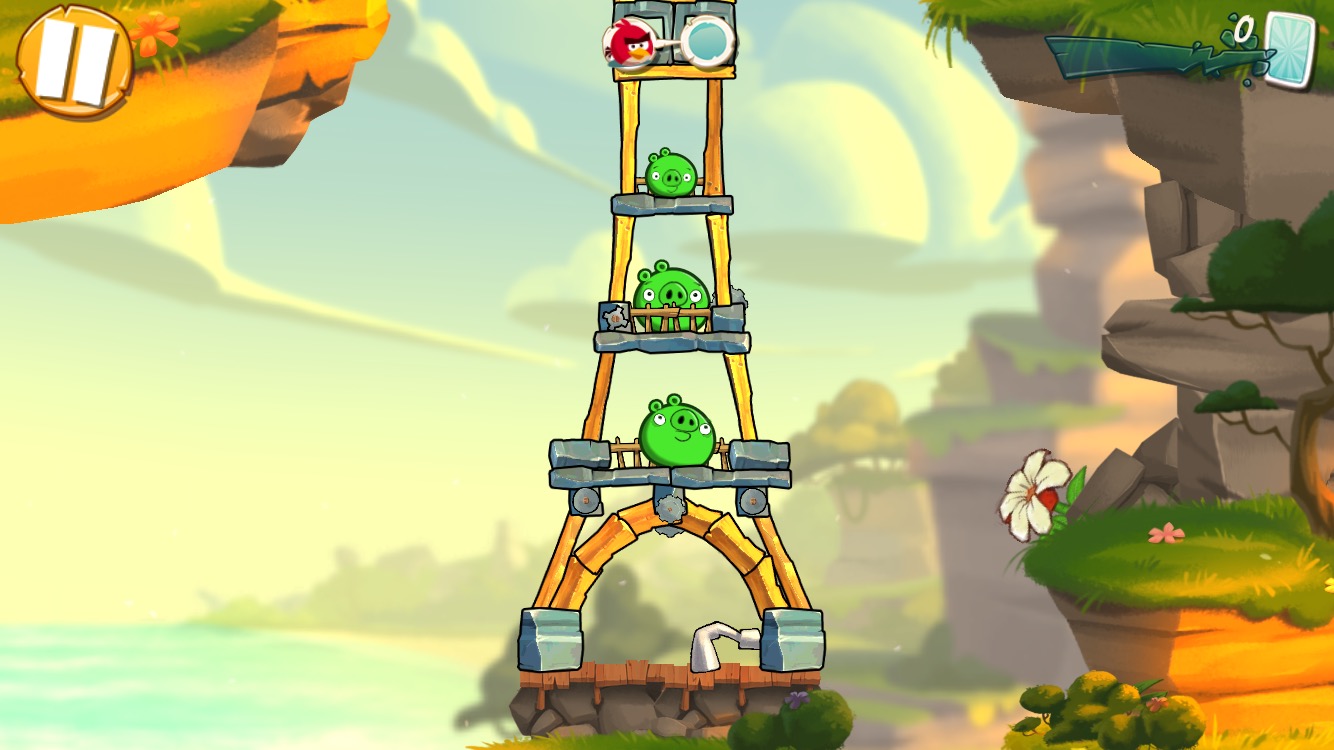 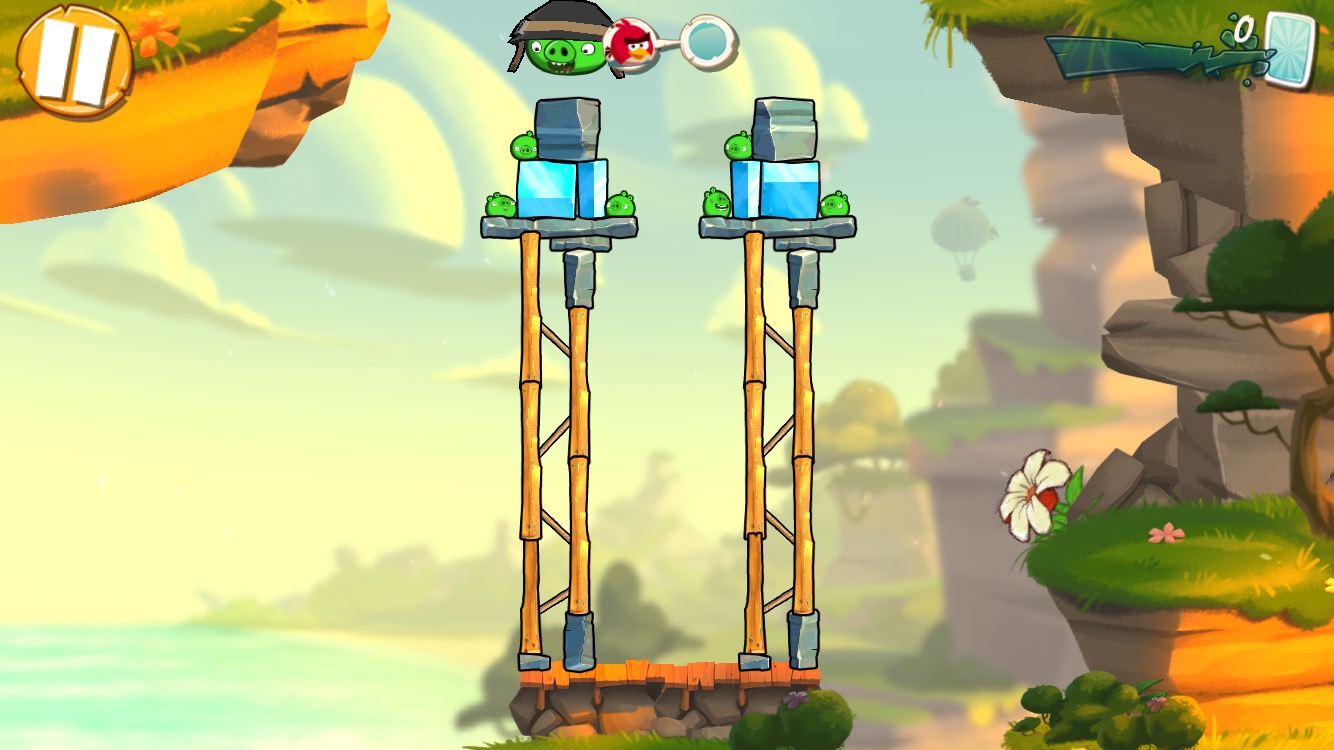 These screens were taken from the same level on two different tries. As you can see, the two structures on this particular part of the level are quite different from each other. On top is an almost Eiffel Tower-like structure with interior portions with bases made out of stone, and pigs hiding in those interiors. On the bottom screen is a dual-tower structure, where each tower is made up almost entirely of wood. It’s hard to argue that the level on the bottom is a lot easier to beat than the one on the top. Whereas the structure on the top has lots of stone that can bring a halt to your attacking bird, the one on the bottom features two wooden towers which are much easier to blast through. To compensate, I think, the level on the bottom features a much tougher pig wearing an army helmet. However, being that the structure is built on a tiny island, there’s almost no chance you wouldn’t topple those towers and cause that hearty pig to fall down into either of the pits and meet an instant demise. What I’m getting at is that the level setup on the bottom is objectively easier than the one on the top.

Here’s another example that’s three different setups all from the same level. 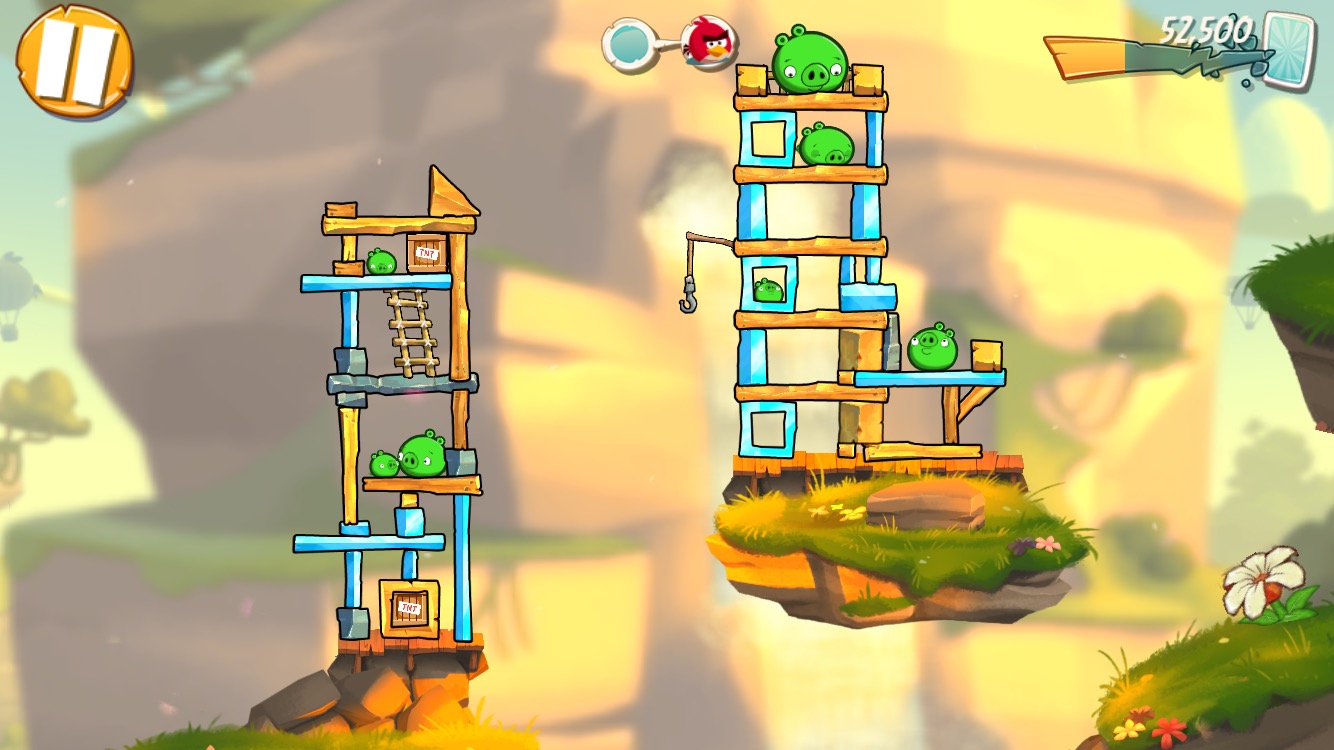 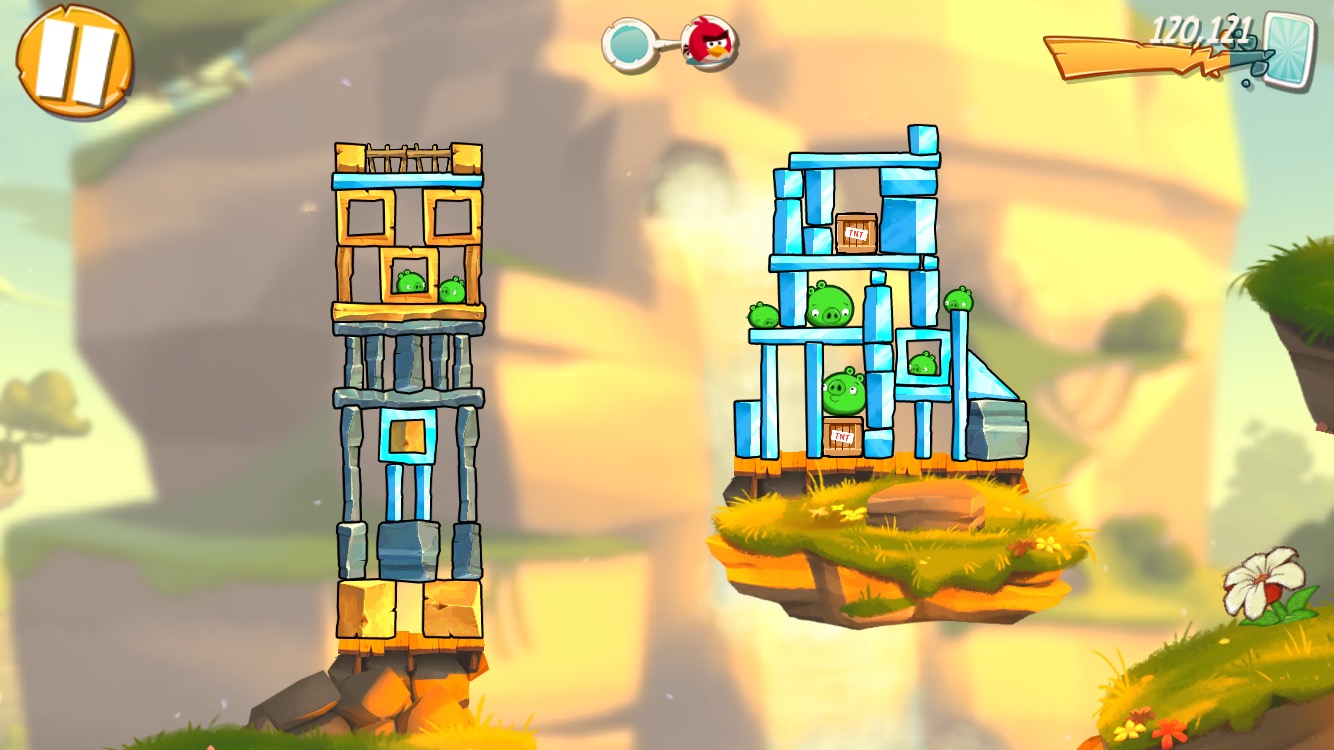 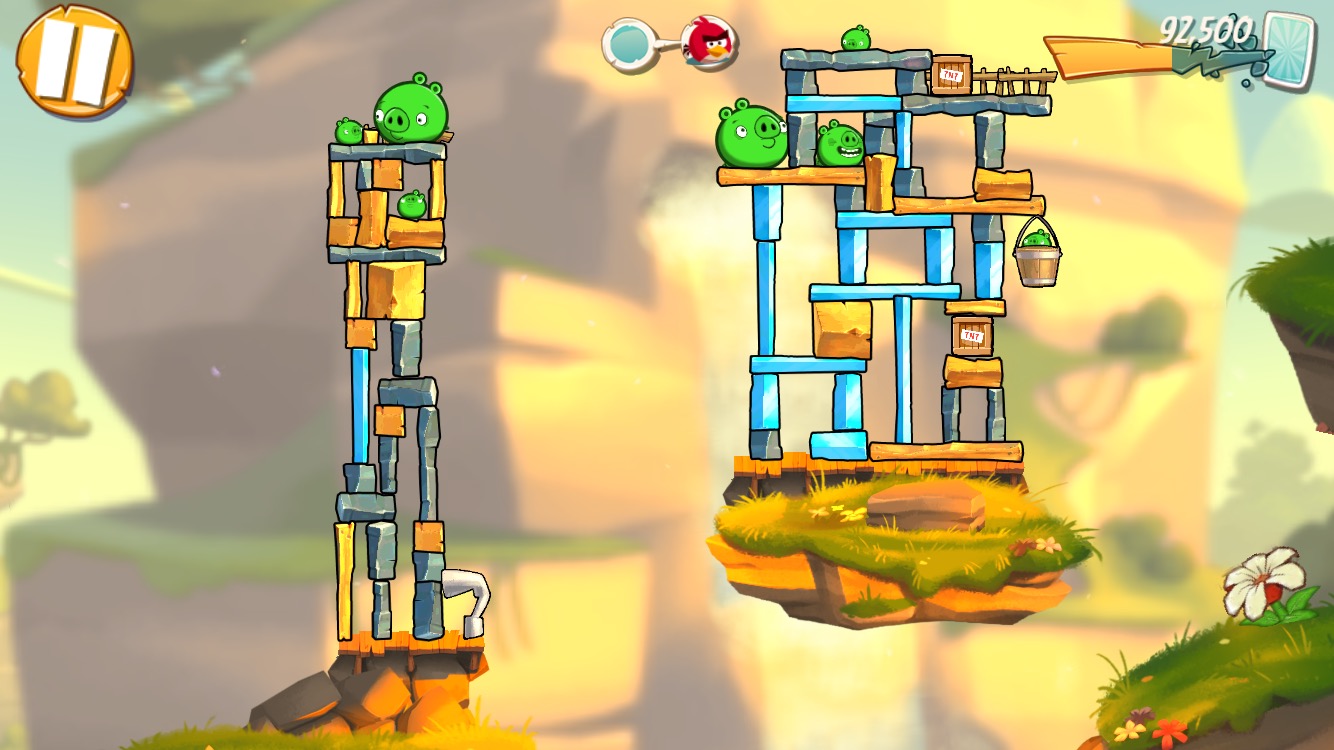 Now, I’m not going to go into another deep analysis of the differences between these levels, but go ahead and check out each of these screens. (Feel free to click them to enlarge.) Here each level was generated quite differently each time. It’s harder to determine which setup is easier than the others, but it definitely seems like there’s some sort of method to how Rovio has built the level generation algorithm. For example, the middle screen shows the first structure made almost entirely out of stone. The second structure then is made almost entirely out of fragile ice. Again, I think this is to provide some sort of balance.

Finally here’s one more example, but these following screens are a bit different in that each time the level generated the exact same structures but simply placed the pigs in slightly different positions. 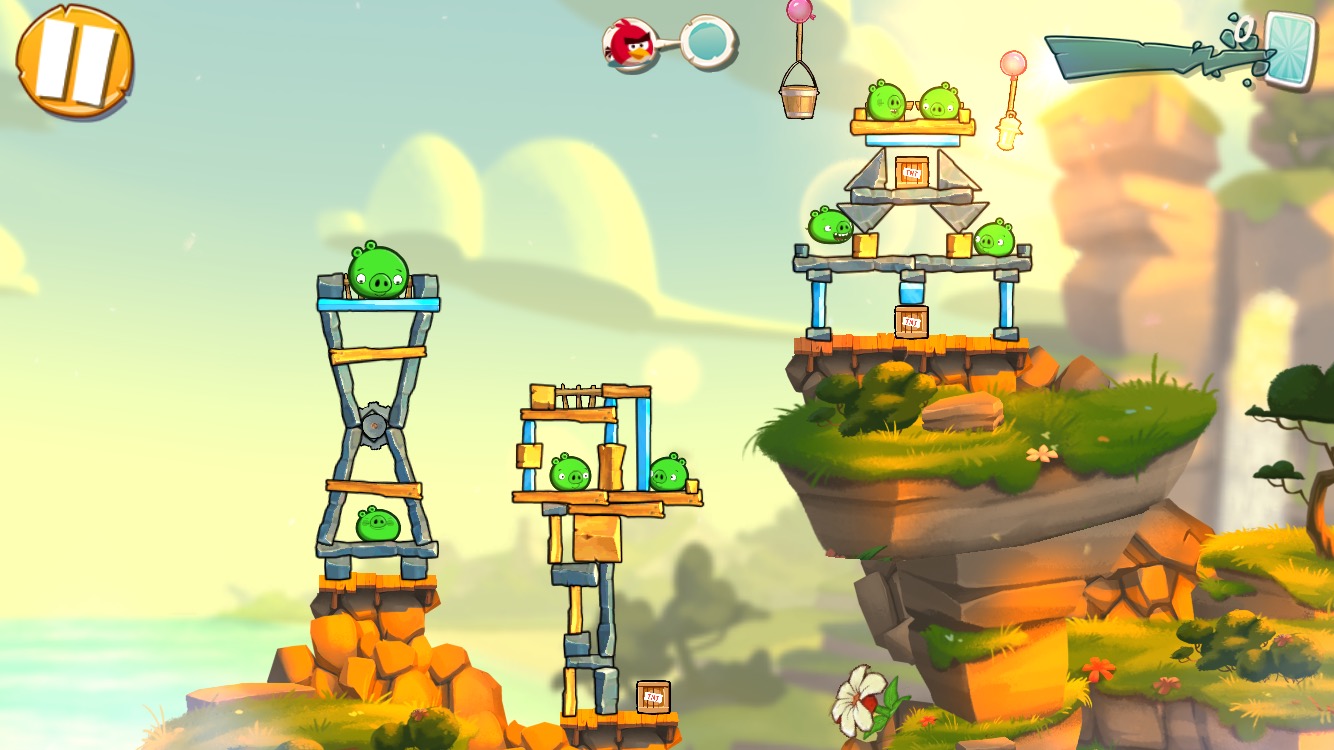 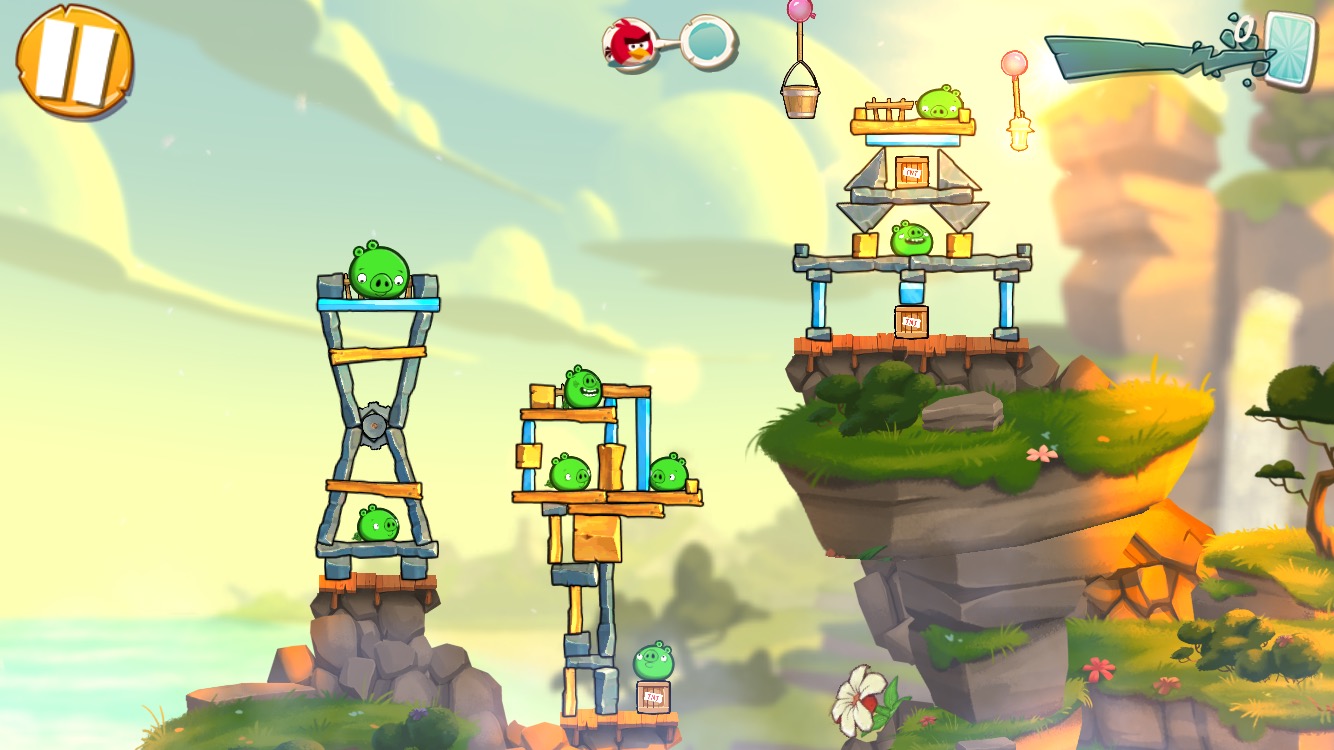 Ok, so I imagine you guys all understand how the random levels work in Angry Birds 2, right? So where the heck am I going with all this? Well, for one, I actually really like the way it works in Angry Birds 2. I think it gives the game a lot of variety, although it somewhat imbalances the difficulty. But I’m actually OK with that, I find it much more fun than the previous Angry Birds games which featured levels that were identical every time you played them. Whether you prefer the new way or the old way is entirely subjective. However, I’ve seen a lot of people who don’t like the Angry Birds 2 way of doing things say they preferred the original games because they didn’t feature any random elements at all. This is totally not true.

The original Angry Birds games were hilariously random. The physics engine was wonky as hell, and you could fire a bird along the exact same trajectory at the exact same speeds ten different times in a row and end up with ten different outcomes. It was not this exacting puzzle game people seem to remember it as, rather it was a totally random crapshoot. Sure, just beating a level in the original Angry Birds games could typically be achieved using the same methods each time. However, getting enough points to earn that third star often relied on brute forcing a level over and over and plain old dumb luck. In fact I’d argue that the “puzzle" aspects of simply beating a level are not lost in Angry Birds 2 and are actually quite similar to previous games. One of the things that eventually made me grow tired of the Angry Birds games was the random nature of the scoring. Same exact levels played exactly the same way over and over and over until finally the physics engine decided to give me enough points for 3 stars. It just wasn’t fun.

Now, I’m not saying that you should love the way Angry Birds 2 does things and shouldn’t wish things were the way they used to be. But when games get sequels sometimes things have to change, otherwise what’s the point? It would have been just another of the Angry Birds spinoff games we’ve been getting for years, and which a lot of people have been very vocal about being sick of. Additionally, I don’t know anybody who has beaten every single level with 3 stars across every single Angry Birds game. So if Angry Birds 2 isn’t floating your boat, surely there’s some levels in the old games that use the old ways that you prefer that are still needing to be completed?

I guess my main point with all this is that the previous Angry Birds games and Angry Birds 2 both rely heavily on randomness, it’s just that they do it in different ways. In the older games you could simply retry the same level over and over as many times as you wanted until the physics engine decided to grace you with enough destruction for 3 stars. In Angry Birds 2 you can’t do this, not just because the structures are mixed up each time but also due to how the life system works. I prefer it the Angry Birds 2 way. Not only does it offer more variety, but it also adds more gravity to every attempt at a level.

Of course, this is just my opinion, but I’m curious what everyone else thinks about this subject? Did you like the “retry ad nauseum" nature of the older Angry Birds games, or do you like how Angry Birds 2 offers you slight-but-meaningful differences every time you try a level?