If you’ve been watching Hearthstone‘s (Free) announcement, which I’m sure you have if you like the game even a bit, you’ve seen that Hearthstone is probably heading for a massive meta shake up with the introduction of The Grand Tournament expansion. The new cards, new mechanics, and new keyword will likely offer new win conditions and maybe shake up the current classes’ power rankings. Going off the few cards (out of over 130) that Blizzard revealed on stream today, we start getting an idea of the direction the game is heading. The first important clue about Hearthstone‘s future is the new keyword, Inspire. This is the first time that an expansion adds a new keyword, so now we won’t have to worry simply about charge and deathrattle and the likes but also Inspire. So, what’s Inspire? Inspire is connected to the various Hero Powers and will trigger each time a player uses the Hero Power with an Inspire card on the board. We’ve already seen the Lowly Squire card, which gains +1 Attack each time the Hero Power is used, and I expect similar cards with Gain +1 Armor, Draw a Card, and so on. 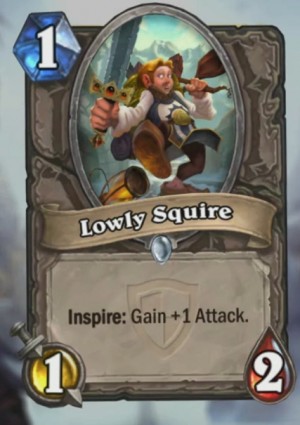 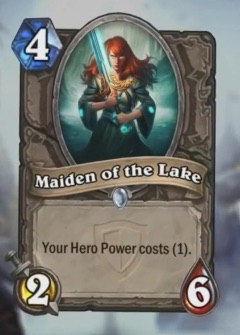 The Inspire keyword comes in tandem with the new mechanic that is all about Hero Powers. Many players have been asking for more ways to interact with Hero Powers, and Blizzard probably listened to them. Cards like Maiden of the Lake will allow you to either lower the cost of your Hero Power or, in the case of Frost Giant, lower the cost of a card (I also expect cards that will altogether stop the opponent from using the Hero Power). I’m quite happy about this new mechanic because I didn’t enjoy how little I could interact with my or my opponent’s Hero Power. In addition to Inspire and cards that influence Hero Powers, Blizzard dropped a very interesting Legendary on us, Skycap’n Kragg, that verifies our initial hunch that this expansion would be boosting the Pirate tribe. Having a Legendary that costs less for each friendly Pirate only makes sense if Blizzard is planning on releasing many more Pirates. And if we see more Pirates, we may also see more Ninjas, as per the original teaser. 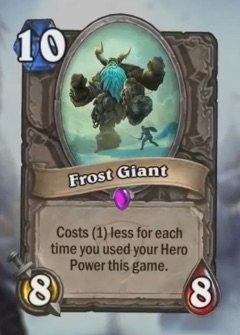 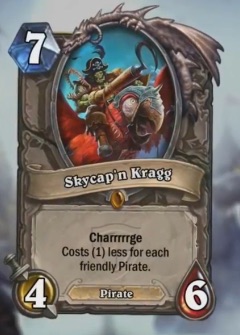 Overall, I don’t think you need to be a Hearthstone pro to realize that now that Hero Powers matter, the balance of many decks will shift. Also, I have a feeling that with cards like Lock and Load, which adds random Hunter cards to your hand, the debate over Hearthstone‘s RNG will once more heat up. Personally, I am very excited about these new cards because they’ll probably change the way we play Hearthstone quite a lot, and change always helps keep card games interesting. Only a few weeks to wait now to find out in practice how the game will change.