Going back and playing the first Cally’s Caves game, it’s stunning how far this series has come in such a short span of time. While the core action gameplay is solid, just about everything else in the game looks and feels, well, like the small indie game that it is. Cally’s Caves 2 (Free) upped the ante significantly, not just in terms of presentation but also in gameplay mechanics, adding a compelling Ratchet & Clank-style weapon upgrade system and smoothing out the overall difficulty. A quick glance at Cally’s Caves 3 (Free) would make you think you’re getting more of the same from the second game, but although the game may not appear all that different at first, I’m going to go as far as to say that this third game represents almost as significant a leap over Cally’s Caves 2 as that game had made over the original.

The story set-up is familiar, and the game makes no attempt to hide that. Cally’s parents have been kidnapped by the evil Dr. Herbert, and it’s up to our gun- and sword-wielding heroine to rescue them. You’ll once again enter the cave system in Cally’s backyard, and the mysterious musician Lloyd is back again to give his advice. There are 120 levels in the game in total, which in pure numbers is slightly higher than the second game’s 110 levels, but the stages also tend to be bigger than the ones found in the previous game, making for a much longer adventure overall. The weapon count is as robust as ever, with 12 different weapons that can be upgraded and modified to your heart’s content. You can also find other power-ups for Cally, including a triple-jump, a roll, and a swimming ability. 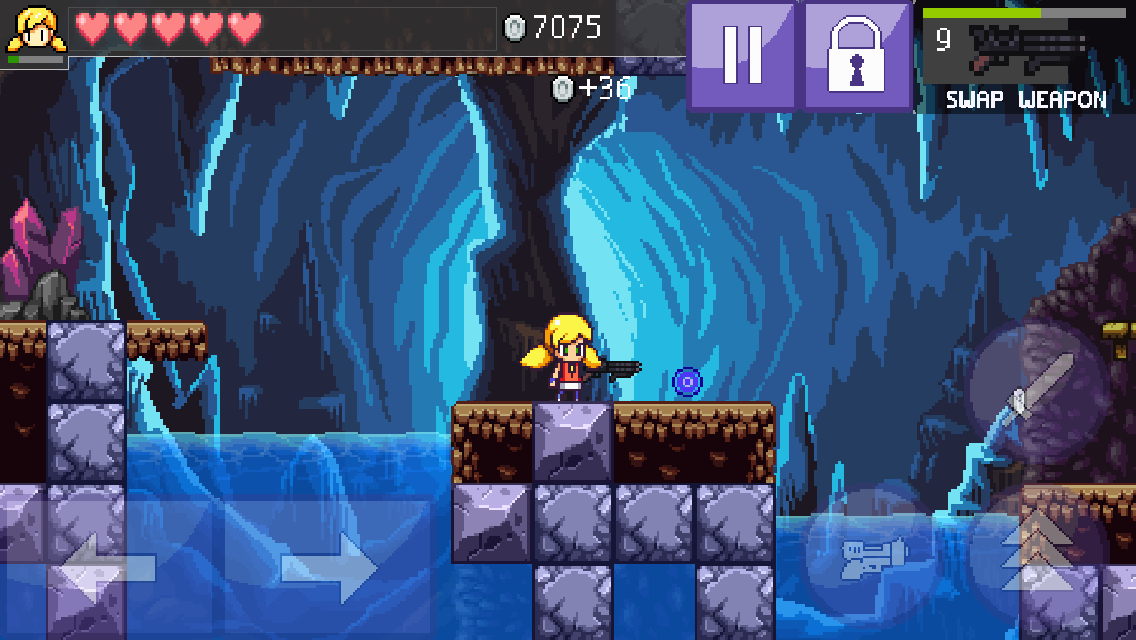 That’s what you get for free with ad support, mind you. If you’re willing to sink in $4.99, you can get access to two new modes. The first is New Game+, which allows you to play through the game again with a powered-up Cally. It’s not exactly the same game, though, as there are new enemies added to the levels, and you’re now able to raise the level of your weapons to 20 instead of maxing out at 10. If you make it through this mode, you’ll be treated to a different ending, as well. It’s almost like a second game that you can buy within the game. The other new mode is the survival mode, which tasks you with surviving 150 waves of enemies. There’s a nice bonus in it for anyone who can.  Buying that bundle will also unlock the sniper rifle weapon and remove the ads from the game. I prefer this set-up to the second game’s IAP, as it not only results in more game to play, but it also doesn’t affect the balance of the main story mode the way the IAP extras in the last game did.

It’s just one way the design of Cally’s Caves 3 feels vastly improved over the previous titles. The first game was punishingly difficult, only allowing you to checkpoint after beating a boss. The second game swung too far the other way, giving you a checkpoint after every level. This time, there are a few checkpoints placed in each world, which strikes a nice balance. Losing has consequences, but never intolerable ones. The shop system has also been overhauled. Instead of pulling it down from your menu at any time, shops are set along the path of each world. They’re manned by a new character, Herbert’s son. This adds a little extra personality to the game, but it also means you can’t just hit the shop anytime you want, consequence-free. That’s important because of another addition to this installment, consumable items. Typically taking the form of foods or drinks, these items can restore your health or provide other benefits whenever you need them. You can only carry six at one time, so it’s not like the sky’s the limit, but it should provide plenty of back-up for anyone who gets stuck on a particular level. These consumables also guarantee the shop never becomes useless, as it inevitably did in previous games.

The levels pack in a lot more secrets than the previous games, too. Of course, there are treasure chests hidden in out of the way places that will help boost your finances, but there are also three different types of collectibles to track down. It’s impossible to find all of them on your first run through each stage, so you’ll need to come back to previous stages with new weapons and abilities. The quick warp system from the last game is back here, so it’s never a hassle to backtrack, as long as you remember the vicinity of where you’ve found each unexplorable path. Some of the collectibles are even hidden in stages you would have no reason to visit on your march to the boss of each world. The branching paths found in many stages really show off the improved level-design chops of this team. As in the greats like the Super Mario games, some of the side paths are glaringly obvious, while others require you to demonstrate a little curiosity and go against your established rhythms. 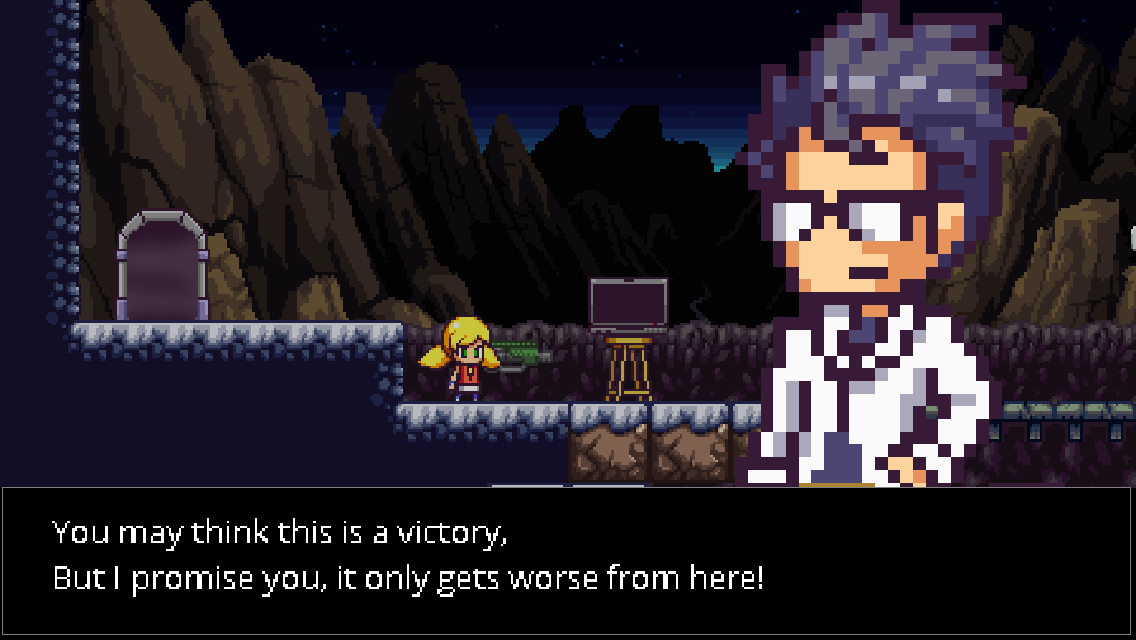 I know I keep banging this whole “improved design" drum, but I have one more thing I want to highlight. The bosses in Cally’s Caves 3 are a serious improvement over the previous games. The problem in the other games is that the bosses are sometimes so hard to defeat, that you find yourself looking for, and usually finding, a way to cheese them to death. This isn’t because of their patterns or anything like that, but rather that they are serious bullet-sponges. Cally herself doesn’t have much of an invincibility window after getting hit, so it was all too easy for a big boss to crowd you and drain your whole life bar from one little mistake, forcing you to start the long process all over again. Cally’s reaction to collisions hasn’t changed that much in the third game, but the bosses are all considerably more manageable thanks to having somewhat smaller life bars. They’re still long battles, mind you, but they’re short enough that they greatly reduce the anxiety involved in making mistakes. Since the game takes greater steps to prevent you from cheesing bosses, I’m glad they improved that end of things.

When I heard that they were adding a roll move to Cally’s arsenal, I was a little bit worried about how it would affect the controls. One of the strong points of Cally’s Caves is how enjoyable the character controls are, and a lot of that is down to simplicity. I needn’t have worried much. The roll is mapped to a simple vertical swipe on the directional arrows. It comes out naturally and effortlessly enough to use in combat situations, if you’re so bold. Another addition is the ability to easily bring up a weapon select screen by touching and holding on the weapon change button. This allows you to quickly switch to the weapon you want rather than cycling through all of them trying to find it.

Otherwise, the controls are the same as they were in the last game, which is a good thing for the most part. The main thing I didn’t like about the gameplay in the last one unfortunately carries over here, as well. Cally’s minimal invincibility window after getting hit, combined with the way she gets knocked back, means it’s very easy for enemies to take you from full life to zero if you get boxed in. The developers have addressed this, in a way. There’s a new power-up you’ll find that activates when Cally falls to one heart, delivering a screen-clearing blast. As band-aids go, it’s not bad. At least this time around, you restart with a full life meter after dying. 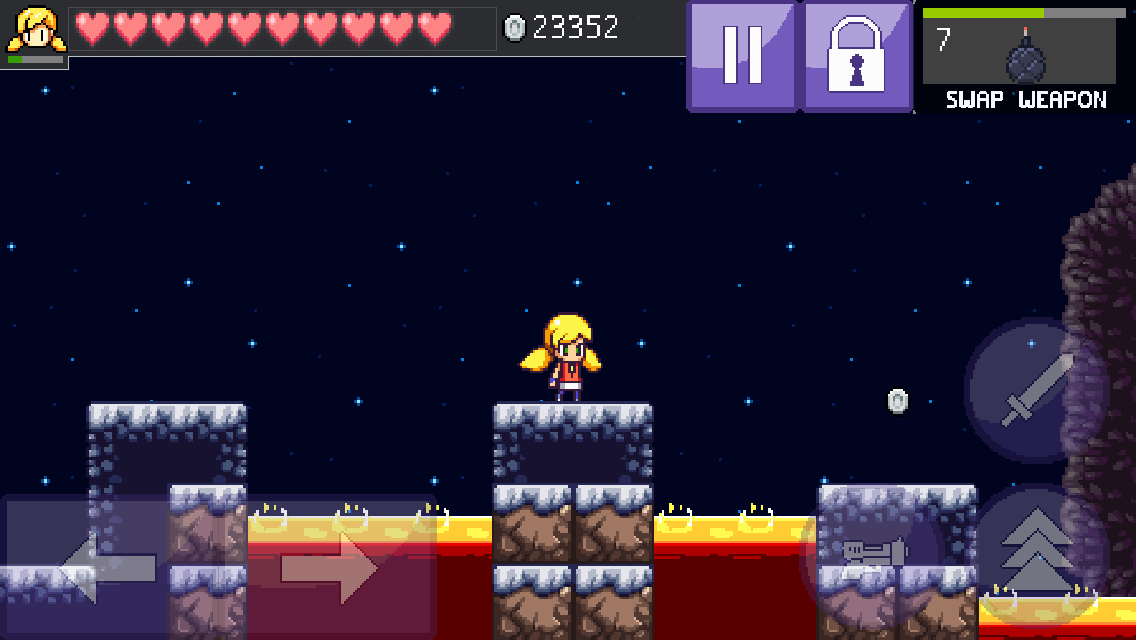 I haven’t even talked yet about the new playable character, or the destructible stage objects that hide goodies Castlevania-style, or the cool yet pricey mods for each weapon. Suffice it to say, everything works the way you would hope, and none of it feeling vestigial or half-cooked. Cally’s Caves 3 shows a developer who has gained all the confidence they need to push out a high-quality, well-rounded game. That extends to the presentation as well. Although it’s not quite the jump that we saw from the first game to the second, Cally’s Caves 3 has a lot of little details and animations that make everything look slightly better. The bosses in particular seem to have gotten a lot of attention this time around. As you would expect, Cally and the new playable character are expressive and smooth in how they move, but the enemies also have a lot of fun touches to them. The music end of things has never let these games down, and the soundtrack in this game meets the same standard as those of the previous games.

Cally’s Caves 3 is jam-packed with content, of which a significant and satisfying portion is totally free to play with only infrequent ads as strings. Virtually every aspect of the game shows significant improvement over its already-excellent predecessor, and its new elements are clearly carefully designed, properly-realized, and contribute greatly to the overall experience. This third game feels like it completely delivers on all of the promise of the original that the TouchArcade forums fell in love with only a couple of short years ago. Take a bow, Cally. No one can say you haven’t earned it.