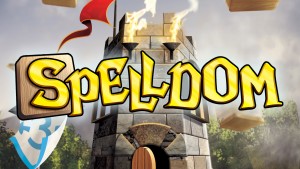 In a refreshing take on strategy and word-building games, upcoming game Spelldom has you setting up various defenses to protect your Castle from your word-wielding opponents. In this game, you can protect your town by using a variety of defenses in order to stop other players from looting your Castle and then take your word-building skills on the attack to take down other players’ Castles. The game has both a singleplayer and a multiplayer mode, with the latter being where the game will probably shine. According to the developers, Hangzone, you’ll be able to team up with other players from around the world to share strategies and together get to the top of the Team Rankings. The game will also offer daily and other challenges that will allow you to earn special awards to display in your town.

I like the idea behind this game; taking the Clash of Clans formula and injecting word-building in it rather than simply dress the successful formula in a different theme. This game might offer a fun new twist in the word-building games on the iOS and being able to team up with friends will make it even more fun. Spelldom will be, of course, online only and F2P. Hopefully, it won’t be pay-to-win.