Heroki ($4.99) is a game I desperately wanted to love. It hits a lot of my buttons: it’s a stunningly gorgeous game. It’s a platformer-type game that’s centered around premium experience, and charging a fair price. It is a game I desperately want to do well. I want other big publishers to see that charging reasonable prices for well-made premium experiences is a viable business strategy for mobile games. I want there to be an audience for this. Plus, it’s just so well-made, and its protagonist is adorable in the way an older Sega character might be. It does a lot right, and I am invested in this game’s success. The problem is that the game is just kind of blah. It isn’t bad. It just isn’t very memorable. 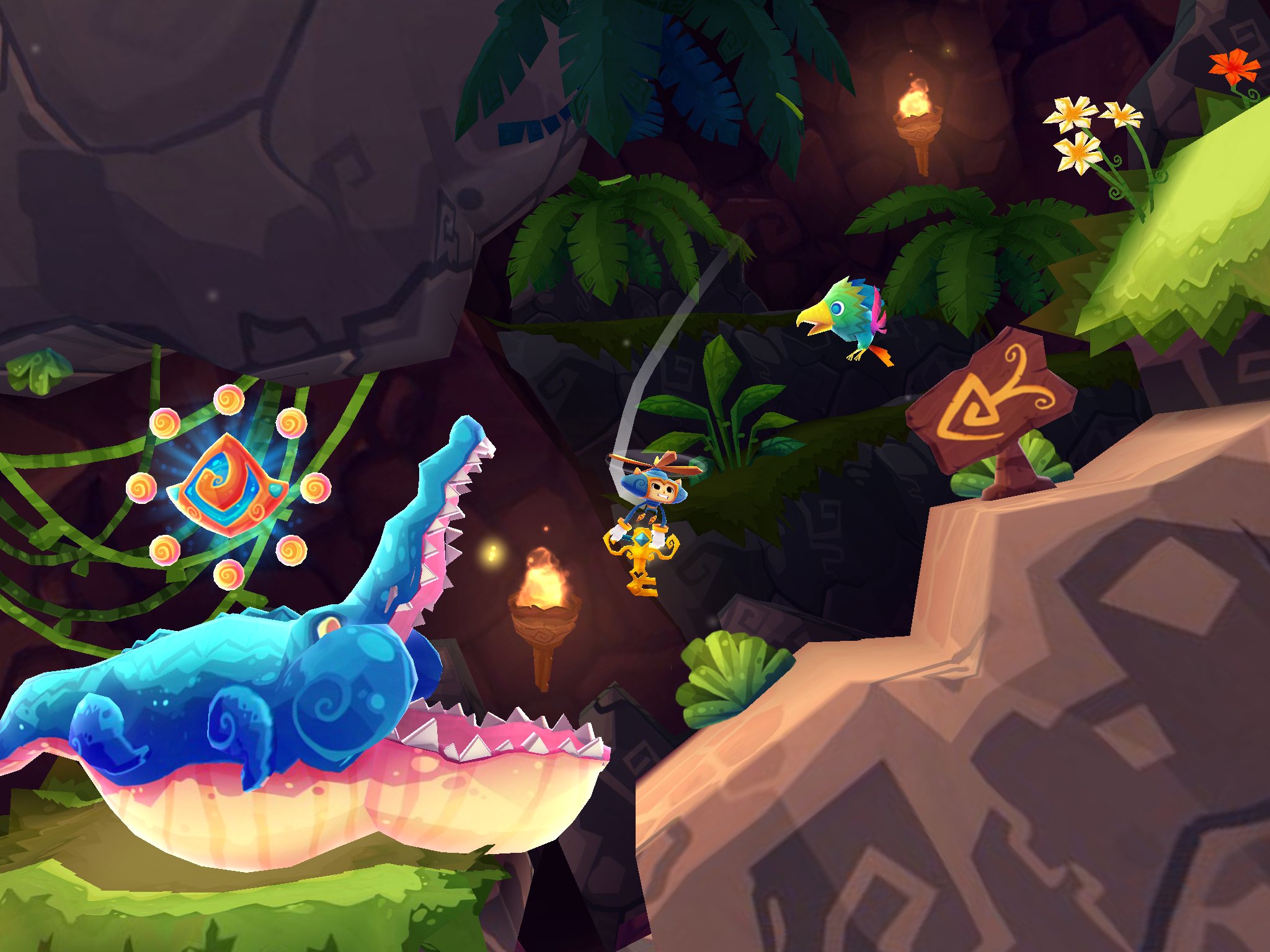 You control the eponymous Heroki, a blue propeller-person who must save the world from the evil villain because no one else could be bothered to, I guess? Heroki has a particular set of skills, and these skills involve picking up and throwing boxes at mighty velocities. I suppose that if saving his civilization falls through, he has a spot on the Kansas City Royals as a defensive replacement outfielder, what with his ability to fly up high in the air, and then accurately throw things at a high speed. Rob a home run and throw a runner out at the plate? Bo doesn’t know how to do that.

Heroki is remarkably different from other platforming-type games because the hero can fly around. This means that progress in levels of gated off by switches. Pretty much every level involves flying around, activating some switch to open a door, along the way trying to find the the various hidden objects that you need to get high scores on levels, but also to unlock particular upgrades. This aspect is annoying, because you’re told you need a certain number of these glyphs in order to unlock future powers. The problem is that it’s mentioned offhandedly once, and then you’re blocked from proceeding if you haven’t been exploring for them. If you give up at one of these points, I wouldn’t blame you. Finding these glyphs is pretty much just a matter of exploring every nook and cranny of the levels, perhaps looking for hidden parts of levels. A pair of goggles that can explore these hidden areas becomes available, but aren’t cheap; you’ll have to not spend money on items to get these. And those items come in handy because 3 hits is not a lot, especially with checkpoints not being all that spread out. 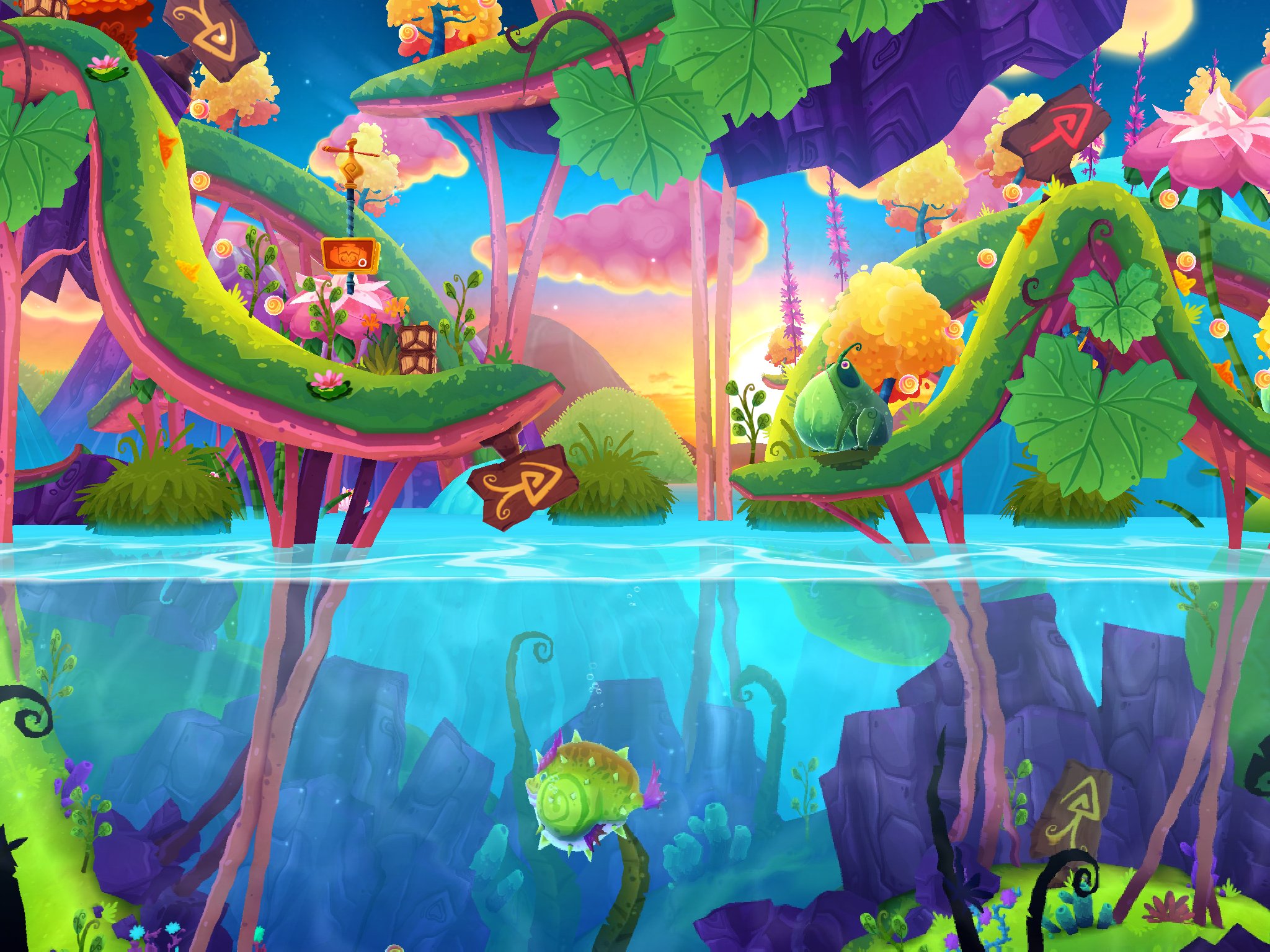 Controls-wise, the game offers three options: one where you can just point and Heroki goes that way, a reverse option where Heroki goes the opposite direction of where you point, and a virtual joystick. None are perfect, but all generally do their job well. The virtual joystick is effective, but kind of feels like it defeats the purpose of having otherwise-optimized controls. The behind-Heroki controls feel like they should be ideal – and the game lists that they are – but they kind of feel like using inverted controls in first-person shooters to me. My grandfather didn’t serve in the Air Force for people to use inverted controls. They’re just unnatural. So, the direct-pointing default option is the best way to go in my book. There’s a bit of finger-blocking going on, but nothing too awful. The game is better on iPad than on iPhone, but it’s fine on the smaller screen. There’s iCloud support here, not enabled by default so you’ll need to sit through a tutorial before you can enable it, but at least it’s there and works. I had to disable it on both of my devices and re-enable at one point where my games got out of sync, but otherwise, it seems to be non-destructive. Thank you, Picomy, for implementing iCloud.

Heroki is absolutely gorgeous, with lots of vibrant colors, and vivid animations. The game runs at 60 frames per second, and it shows. All the characters were designed to be lively, and Heroki has great idle animations. These are top-notch production values for a mobile game. There’s a reason why it’s $7.99. The game’s levels feel more built for a console game length rather than a mobile game, to be honest. The checkpointing could be better, especially. You can only take 3 hits before dying, and especially since re-crossing a checkpoint doesn’t ‘save’ your progress, from when you first hit it, it’s decidedly a flawed system. 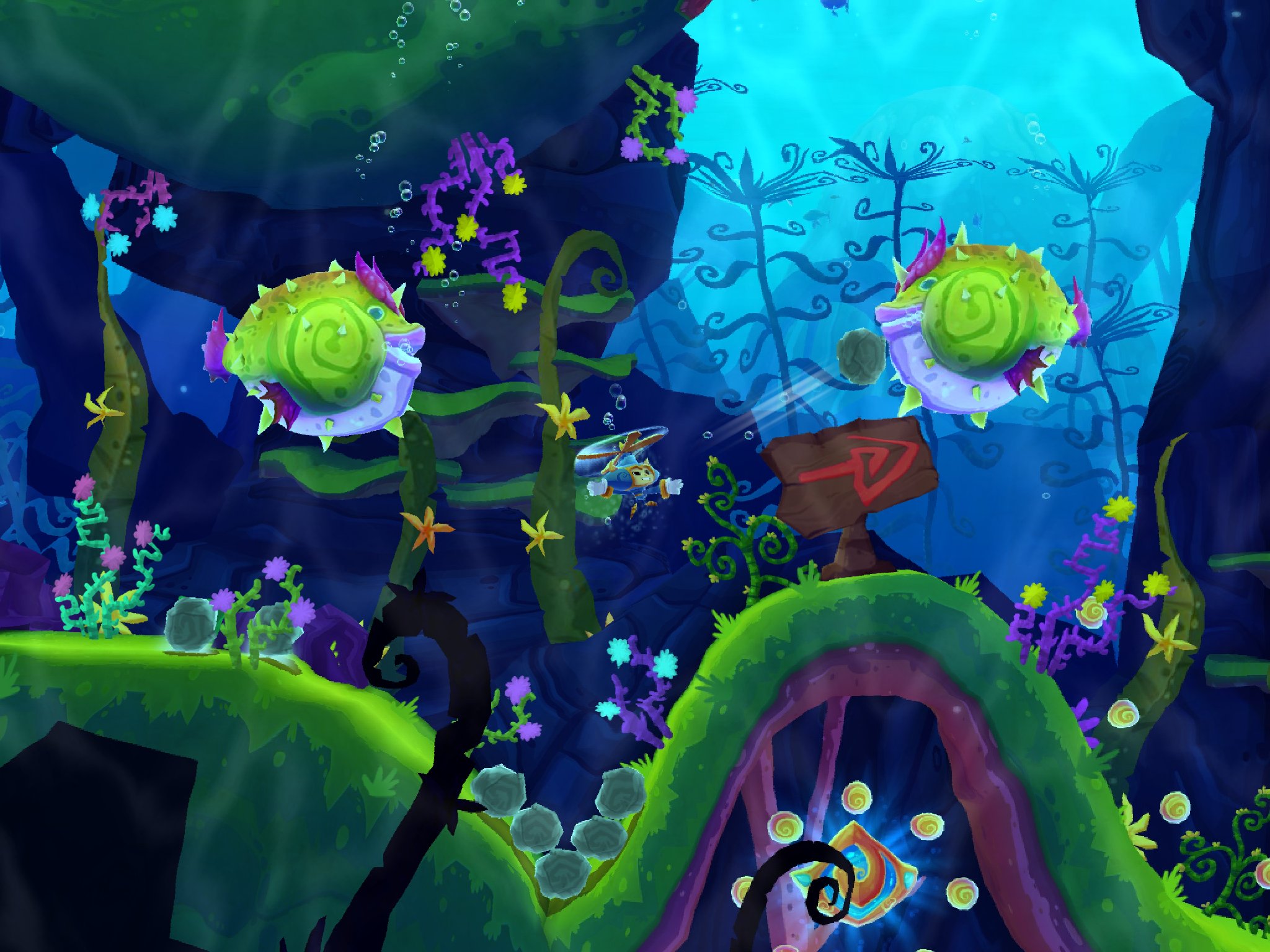 Heroki is way too repetitive. Its levels are, as I said, largely centered around activating switches to progress. There’s slight variations from level to level, but really, it winds up being an experience that’s difficult to stick with because it never really feels all that different. Rarely does the game throw a new wrinkle your way, and generally it’s not that great. When the game does throw a wrinkle in the way, like having to dodge rocks falling from the sky, it doesn’t feel that much fun. The parts where you have to go into free-fall aren’t that great. This game just feels so oddly restricted in what it can do, and considering you have gorgeous visuals and the ability to fly around everywhere, it feels like there’s so much more this game could be.

Instead, I got an experience that I felt like I could quit and never touch again. I never felt all that compelled to play it once all the tricks were revealed. I soldiered on, but nothing that this game kept throwing at me ever really left me pleasantly surprised. It felt like a repetitive slog, and even the introduction of new abilities didn’t do much to keep me excited, or to vary the game in any interesting way. Perhaps if the game’s ‘puzzles’ click with you, you’ll love Heroki, but me? This feels like a real letdown since everything around it is so well-made. Seriously, this game looks gorgeous.

I imagine this sort of review and score might stir up some anger from when I gave Gunbrick ($5.99) a similar three-and-a-half stars rating. Both games come from a similar place: five-star concepts and production values, they just don’t stick the landing of being a great game, and leave me wanting more from the experience. There’s so much that could have been amazing about Heroki. It just falls so short, and it genuinely makes me sad. It pains me for so many reasons to say bad things about Heroki because of what the game could potentially stand for. But as a game? It’s just not great.