The majority of games I’ve been playing the past few months have been somewhat shallow affairs. Quick reaction games, simple puzzlers, goat simulators. That’s not to say some of them haven’t been excellent and extremely rewarding experiences, but it’s no shock that iOS games, for the most part, tend to not be terribly deep. Now, before you exclaim “But Nate! What about X or Y?”, just know that I’m not saying there aren’t ANY substantial games on the App Store. I’m just saying that if you pull up the list of recently released games on Appshopper any given hour, you’re gonna be flipping through quite a few pages before you find anything more than random clickers, Ketchapp-style microgames, and some gross casino sims. (Also, don’t call me Nate. Only my friends call me that, and I don’t know any of you weirdos.)

So it was quite a shock to the system when I found myself knee-deep in Adventures of Pip ($5.99) by Tic Toc Games. It’s a retro-inspired platformer with a bit of meat on its bones. It’s like most of the iOS games I play are wonderful little desserts and I’m finally getting a full meal here. And just to re-iterate: I know it’s not THAT rare for a game like this to come along on iPhones, but usually Shaun or Carter snatches them up and I’m left playing flippin’ Angry Birds Fight! (Free). 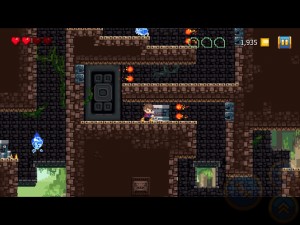 In Adventures of Pip you play as the titular Pip (it’s his Adventures, after all). He’s a simple pixel living in a 32-bit kingdom, when suddenly an evil queen comes along and does a little princess-napping. I know what you’re thinking: How can I possibly know Pip is a “he” if it’s just a pixel? Is our society so old fashioned that we feel the need to oppressively shove mere shapes into gender categories now?! I’m glad you asked, weirdo, because that leads me to game’s main gimmick: Aside from the normal running, jumping, and attacking, you also have a special ability that allows you to evolve from that single red pixel into an 8-bit character, and then a 16-bit one.

It may sound like a small thing, but this “gimmick” is actually a major aspect of the game. Kind of like switching characters in a Donkey Kong Country game, each version of Pip has slightly different advantages and disadvantages that influence pretty much everything you do. As a lowly pixel you’re slow and can’t attack, but you can fit into small areas, jump extra high off of bouncy mushrooms, and float to the ground, Leo’s Fortune ($4.99) style. As a blocky 8-bit dude you’re faster and can wall-jump, but your only attack is a weak little punch. And as the gorgeous, high definition 16-bit guy you have a powerful sword and can move heavy blocks, but you can’t wall-jump or bounce on mushrooms. It’s actually kind of surprising how many subtle little differences there are between Pip’s evolutions (particularly when water and wind enter into the mix), and it gives most levels a light puzzle-y feel as you switch between them to figure out what version is best for each situation. 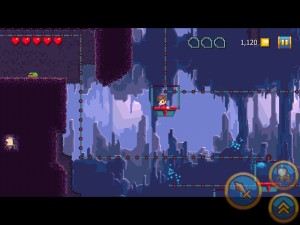 Of course, none of this fancy platformin’ and evolvin’ and whatnot would be fun if it didn’t control well. And… it sort of does. For the most part. Let’s just say that if you are playing with an MFi controller, or on an iPad and don’t mind fixed on-screen buttons, you’ll probably be good to go. If you’re on an iPhone, however, prepare for a bit of frustration. The buttons are incredibly tiny on a phone, making it tricky to hit the ability buttons on the right with much accuracy or consistency. And as I mentioned, the on-screen controls are fixed in place so you can’t shift them around to your liking or change their sizes. It’s disappointing, especially since those features are pretty standard for iOS platformers these days. While it’s not a huge issue, it’s definitely a smudge on a game that’s pretty outstanding in just about every single other area. (One final thing I should note is that I did experience a bit of lag when using an MFi controller and found the on-screen controls more responsive, but there’s a fair chance that’s just my Stratus being dumb.) 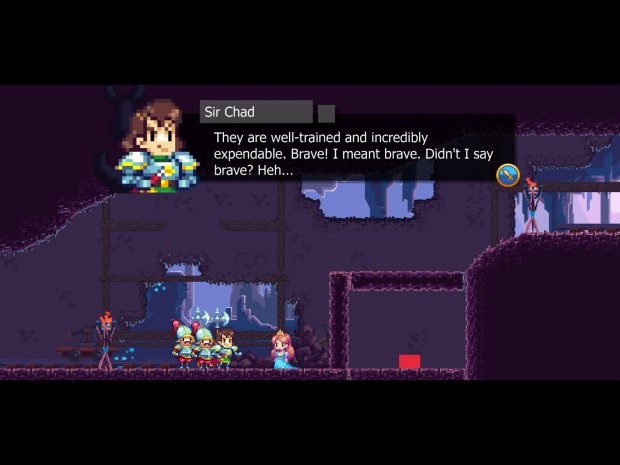 I have a confession to make: I don’t care much about story in platformers. I’m the type of guy who’s usually like “Wut? Cutscene? Skiiiiip.” That being said, Adventures of Pip actually has a surprisingly clever and engaging narrative. The pixels that you collect in the story represent wealth, and the more pixels a character has the higher their class. Pip (at the beginning of the story) is a modest little square with no definition, and the King, Queen, and Princess sit comfortably at the top with 32 glorious bits. The other villagers you encounter (and have to find throughout each level as a secondary goal) can be any class along the pixel spectrum. The Princess, it turns out, was born with the ability to change resolutions, and the Evil Queen DeRezzia kidnaps her and harnesses that power to strip the good King and Queen of their royal status by turning them into lowly single pixels. It’s a lot of fun, and there’s a fair amount of humor as well (as there has to be with a plot like that).

I feel like I could go on and on about this game, but you probably have things to do, so here are some final stray observations: the art is fantastic in this game, with its own unique style while still paying homage to the pixel-y classics of the past. The character animations are incredibly fluid and give the movement a really good feel. The levels are a bit longer than most iOS platformers (it’s a port, after all), but never so long that they become frustrating. The game can be pretty tricky at times, and the iffy controls don’t really help, but there are enough checkpoints in each stage that it’s not too big of a deal. The game is well worth its $15 asking price (after an initial sale that was 66% off), but if you’d rather not pay that much for game I guess you can go back to Fallout Shelter (Free) or the latest Ketchapp thing. Now if you’ll excuse me, I’m gonna dive back into my metaphorical steak and potatoes and save a few more villagers.