Eons ago, a roguelike was created, and lo, all was good. The game was highly praised, and many flocked to bask in it’s simple but difficult glory. This congregation became a community, discussing the game’s many elements and even creating a wiki, raising the lowly game to great new heights. The roguelike grew over time, incorporating new mechanics and levels, but still something was amiss. This game was not to be found in lands of iOS. Thus a prophecy was born, that this game would come to iOS, heralding a great new age of…. Something, something. That’s getting tiresome. Long story short, Pixel Dungeon ($2.99) is here, fools! 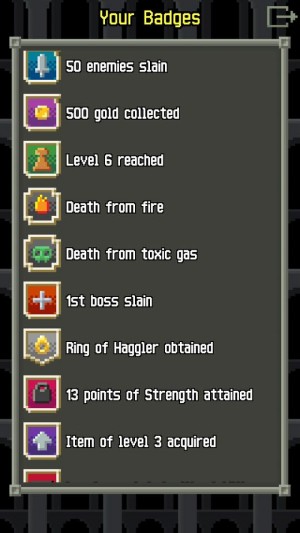 Created by Oleg Dolya, or Watabou, Pixel Dungeon is a super simplistic modern roguelike that had just that right blend of interesting mechanics to catch lightning in a bottle and addict a great many to its pixely goodness. It’s been on Android and other platforms for ages, and we finally have it on iOS. Inspired by old school style roguelike Brogue, Pixel Dungeon adds enough modernity to be approachable, but is still brutal as can be, as it should be. Remember that time Brock Lesnar german suplexed John Cena like 16 times in one match, to prove a point? That’s what this game does to you, only you aren’t John Cena, and it’s actually fun in the process.

Like I said, this game is classic in many ways. You choose between three classes (Warrior, Mage, and Rogue), later unlocking a fourth (Huntress), and set to find the Amulet of Yendor within the secret, labyrinthine structures under the city, starting with a sewer fighting rats, gnolls, and wraiths, before entering a secret, abandoned prison, an ancient dwarven metropolis, and so on. Everything is tile/grid based, and you move in turns. Every movement, every item usage, takes one or more turn phase, and the same goes for enemies. Sometimes multiple phases pass when you don’t realize it. I once ate food in the same room as an alert enemy, and they were able to land multiple strikes on me in a row before I could retaliate. 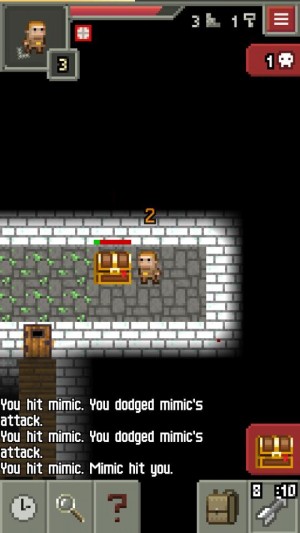 You tap on tiles, items and enemies to move and interact. You have a wait button, which for those of you who don’t play these often, is mainly so you can let enemies approach you, letting you strike first, as every advantage you can possibly get is necessary in these games. You can also search a three by three grid around you to find traps and hidden doors, and you can use the examine function to see a detailed description of every single tile type, without exception. You can hotkey things like potions and wands. Wands can be equipped as a physical weapon by mages, but anyone can use their spells, which are targeted. You can also drop or throw any item. Most of this game is about assessing risk vs. reward. You can be super OCD and meticulous, searching every time you take a step to avoid traps and such, or you can play more casually. Most mechanics and choices reflect this dichotomy.

If you’re having trouble finding the stairs to the next level, or if you don’t feel like waiting or think there might be some secret rewards in store, you can sometimes find and jump down chasms. Some of them are almost begging you to do it through the tile layout. You’ll always take damage when you land, but sometimes you’ll land in a room with a chest and a key! And saving time is also an important factor. There is a hunger mechanic. You will need to eat every so often, or you’ll hemorrhage hit points, and sometimes you just won’t be finding new food items very quickly. 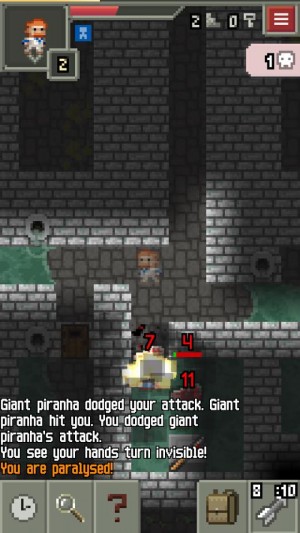 There is so much to find in these cold, dank halls. Chests, and locked doors, and yes, some chests are actually mimics (monsters that look like chests. Basically the high fantasy equivalent of a Venus flytrap for adventurers). You’ll find tall grass that blocks your view, but can hide seeds, health restoring dew drops, or even sometimes items. Seeds can be used to grow trap-like plants or brew potions, which you’ll also find many of. You can also loot piles of dead bones, which will either explode into coins, or into a wraith, which is extremely hard to hit with physical attacks. Just so you know, all the grave stones will also unleash wraiths, except there will be four of them and they’ll surround you. Unless your back is against a wall or two, hint, hint. Using a basic offensive wand spell zaps these guys with no problem.

Every new run, each item needs to be re-identified. Potions, weapons, armor, and scrolls simply come in various colors, or with random gibberish in the case of the scrolls. The types of potions and scrolls available in each game are always the same, but they’re not always the same color/description. You can identify them by experimentation, or with scrolls of identify. Experimentation is generally the way to go, though these often have negative effects as well, such as an inconvenient case of bursting into flame. This will kill you if you aren’t near a puddle of water, so take some precautions before you test new items. The sooner you identify everything, the better you’ll be able to manage the higher difficulty floors. Try not to equip unidentified weapons, armor, or trinkets though. They can be cursed, and you might be unable to swap it out until you find a scroll that cleanses the curse. As a side note, you need a certain level of strength to use each weapon effectively, and upgrading a weapon both makes it stronger and lowers its strength requirement. 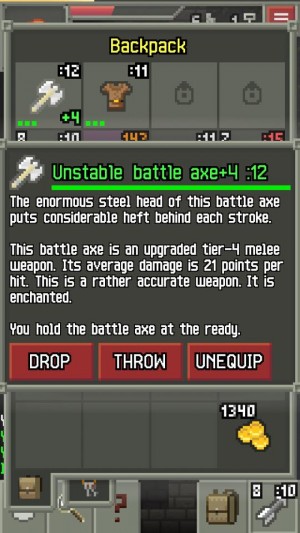 If you manage to get your hands on a good high level weapon and marginally better armor, you’ll be much more suited to success, no pun intended. That’s where the random chance of the game comes in. What potions, scrolls, weapons, etc. that you encounter is also random, and sometimes you just won’t have the same luck. But there are so many interesting factors at play, with the hunger, and with the mystery potions/scrolls, that it always feels so interesting. I never got bored playing this game. And there are always interesting scenarios around the corner. I once had a mystery wand as a warrior, and encountered a wraith. I was low health, and none of my hits were landing, so I tried zapping it with the wand. It was a wand of teleport. The wraith ended up in another part of the same floor. I just kept zapping it over and over again, until I found the exit. There are 25 levels in total, with a boss every 5 levels before you enter a new zone. Each floor also has a signpost with a helpful tip, so the farther you get, the more you learn.

There is also strategy to what class you play, but mainly in the early game. Once you’ve gotten some decent items, things become a bit more straightforward. The warrior, for example, regains some health whenever he eats, is better with missile weapons like darts and javelins, and has potions of strength identified from the start. Meanwhile, mages have scrolls of identity identified from the start and regain wand charges whenever they eat. Oh, and on top of this, each class has a choice between two sub-classes after you beat the second boss. And you can craft potions. And there are enchantments. There is SO MUCH to do in this game.

It is rather frustrating how so many specifics of the game remain unclear. For example, various enchantments on armor and weapons often don’t tell you what they do. Likewise, unless you’re using the wiki, things like potion brewing seems like a total crap-shoot, unless you took notes for every permutation of seeds. This is part of the design in a very real way, but it is still annoying. There are many convenient mechanics that try to make up for it. If you find the exit but aren’t done exploring a floor, you’ll see an arrow in your character portrait always pointing at the exit. If you don’t care for what little atmosphere there is, you can enable a higher brightness mode. Your progress is also auto-saved at all times. The soundtrack by Cube_Code is fantastic, and there’s even a smattering of funny references/memes to find. This is right up there with Cardinal Quest 2 (Free) as one of my favorite mobile roguelikes. Though it’s much less forgiving and expansive than CQ2, it’s basically the other side of the same classic vs. modern coin, and you should definitely try it out on whatever platform most suits you. More info on their site.