As we reported earlier, Super Evil Megacorp’s latest update to its mobile MOBA brought a host of changes to the game. Probably one of the biggest additions to Vainglory (Free) was the launch of the newest hero, Rona. As is the case with all new hero debuts in Vainglory, there are some pretty cool new intricacies in how to use her. We’ve been playing many a game with her since the update and have a few beginner tips to help succeed.

Classified as a berserker, Rona is best described as a high damage dealing melee hero that sacrifices longevity for pure damage. I’d almost call her a warrior version of a glass cannon except that she obviously has a little bit more health than a pure mage hero due to the necessity of having to get close to cause damage. Still, as you’ll see her abilities tailor her as someone that’s best used as a someone that joins a fight rather than initiates one. 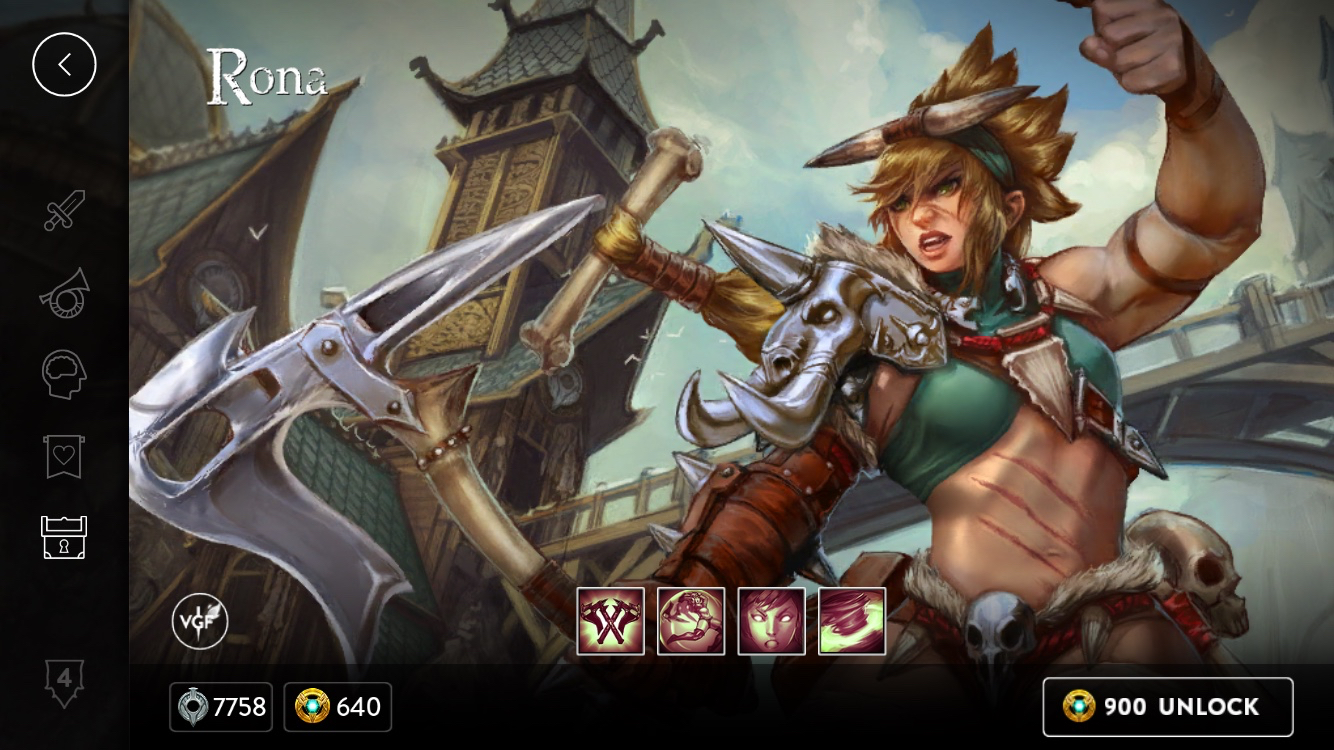 Rona’s Heroic Perk, Berserkers’ Fury, is an interesting one as it replaces the energy mechanic with Bloodlust, which is a resource that is gained by attacking, taking damage and using abilities. Fury also provides Rona with a permanent trait that has her attacking 50% faster than most heroes, with the downside being that her damage is always capped at 80% of the max. It’s a fair tradeoff in my book as Rona can cause some serious damage when left to her own devices.

As you might imagine, the three abilities that Rona uses all utilize Bloodlust in some form or fashion. ‘Into the Fray’ has Rona leaping to the selected area, gaining Bloodlust as she lands on enemies. Rona also earns some temporary damage reduction depending on how many heroes she lands on. Finally, after a few seconds, the ground that she lands on erupts, causes some minor damage and slows down enemies that walk upon it. This is the best and fastest way for Rona to jump into a fight (literally) and get into a position to deal some damage.

Her second ability, Foesplitter, should be your bread and butter in terms of dealing some quick damage. When you activate it, Rona goes into a two-phase attack. First, she lunges towards her target to launch a basic attack. At the same time she also gains bloodrage. At this point, there’s a small window to reactivate the ability to attack again. The reactivation requires you to be pretty much in melee range in order for it to work. However, if you can activate it, Rona consumes all the bloodrage she’s built up and launches a pretty nasty attack. In fact, it causes a mortal wound that adds more damage depending on how much bloodrage was built up. In addition to all of the above, the ability cooldown decreases by a second with each basic attack. Hence, my earlier statement of using it as much as you can (assuming you’ve built up some bloodrage for it to be effective). 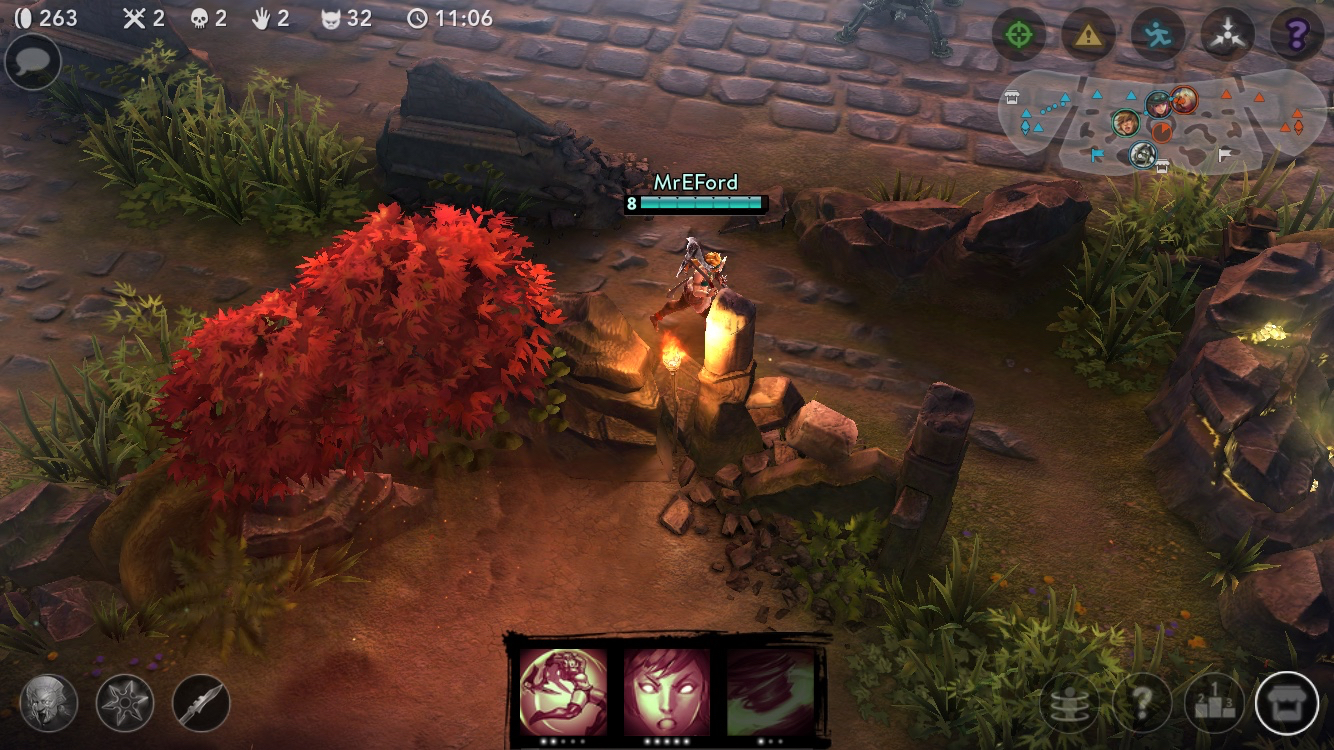 Rona’s ultimate is known as ‘Red Mist,’ and this has the ability to make or break whole battles. Activate it and Rona starts a whirlwind attack that deals constant weapon damage to enemies that are near her. She can also move while the whirlwind is activated but at a much slower pace than normal (obviously). The length of the attack depends on the amount of bloodrage accumulated prior to use as well as the level of the ultimate itself. It’s very much a melee based ultimate but if you can position Rona near a hero or two and launch it, you can do some very heavy damage.

Being a melee character, an obvious build strategy would be to focus on attack items. This is actually the recommended strategy per the game, as it takes you through picking up a lot of attack items (such as Sorrowblade) mixed with a dose of vampiric (Serpent Mask) and boots before moving on to piercing (Piercing Spear to Bonesaw) and ability cooldown abilities (Clock Work). This is probably the most basic build to utilize Rona’s basic melee advantage however there are a few different alternative routes you can go.

For example, you might want to shore up your defense to last a little longer in the fray by picking up Metal Jacket or Fountain of Renewal or even an Aegis if you’re against a crystal heavy group. A lot of guides also like incorporating an Aftershock as end-game for ability cooldown, as well as a significant vampiric attack after each ability use (which can be quit a few with Foesplitter. Players can also go the Tornado Trigger or Tyrant’s Monacle route to basically go all in on basic attacks. While the developer notes claim that Rona is useful with a crystal route, I’d recommend going attack at least while learning her and then experimenting with crystal once you’ve learned the ins and outs. 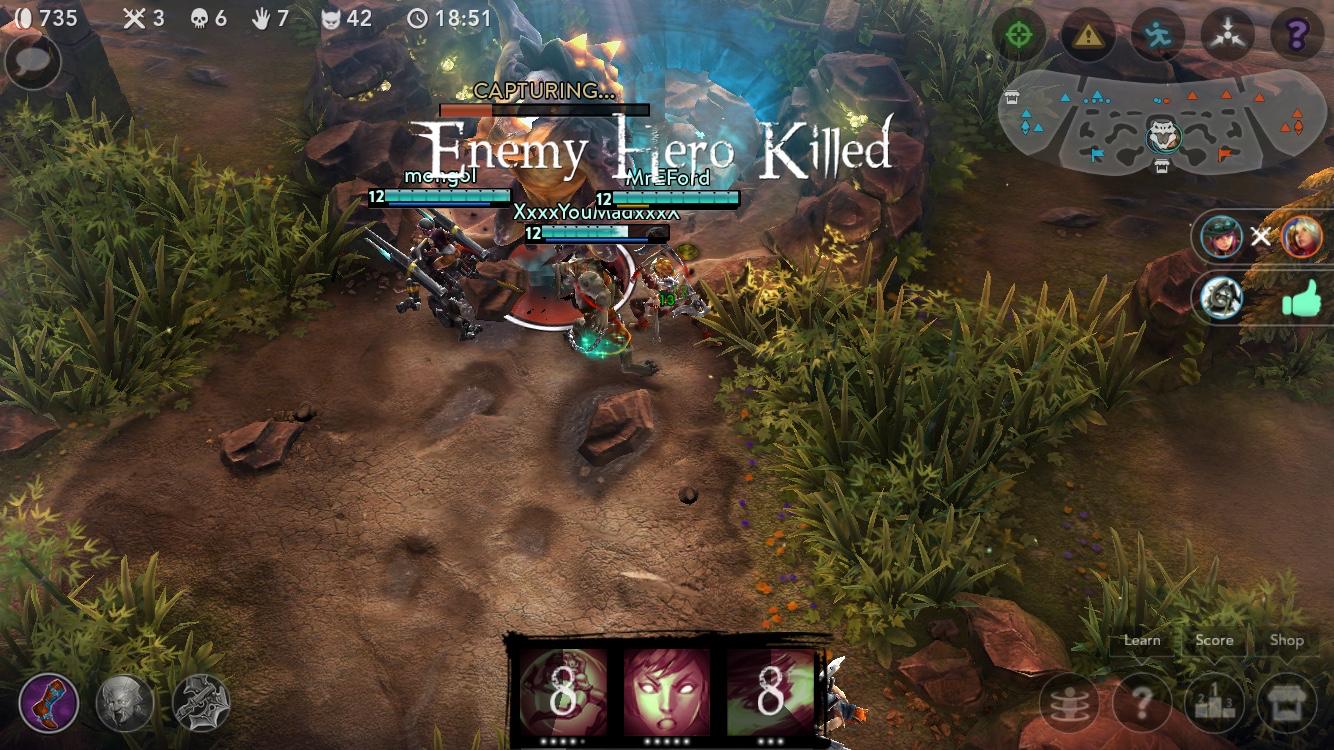 So now that we’ve gotten the abilities and potential builds out of the way, how should one use Rona in battle? Well, I’d start her out in the jungle, preferably with a defender like Catherine. once you’ve earned a few levels and gotten some items, you can potentially start roaming or continue in the jungle. Once it looks like a team battle is about to break out, I’d refrain from initiating the fight and instead going in shortly after it starts with Into The Fray. At that point you can launch the first phase of Foesplitter and then decide whether to reactivate for the mortal wound or launch into Red Mist (which will all depend on positioning). Rona is pretty slow so she’s not the best to chase down stragglers. You’d probably also want to refrain from doing solo chases purely because of her health.

So, if you jump in after a battle, manage to do some heavy damage and not put yourself in a position to get ganked, you should be in good shape. I found Rona to be particularly tough when first learning her because her melee trait and abilities make it seem like she would be really good in a one-on-one setting. That’s really not the case, as she truly shines in team battles where she can potentially jump in and do some quick damage before she’s attacked.

Rona is currently in her ICE grace period but she’ll be available for purchase with glory in a few days Meanwhile, if all goes well, expect her to be in a free rotation within a month or two. Otherwise, stick with us as we keep tabs on future content additions to Vainglory.