I spend a lot of time playing Hearthstone(Free) on my iPhone. Between the frequent updates and competitive deck building, its a little bit of an obsession for me. It’s becoming more and more prevalent that full featured desktop games are making their way into our nook of the gaming world. Its really an awesome and fantastic thing. One thing that is getting on my nerves, however, is that we are seeing a neglect for the rules.

You see, while I love Hearthstone, my fingers don’t. In fact, they get pissed off and yell at my brain when things don’t go their way. It’s a help when I play a musical instrument or if I get my hand caught in a door because my brain can kind of go on auto pilot and not worry about those things as much. It is not a help when I play Hearthstone though. There are a lot of really tiny buttons in Hearthstone that at face value still actually do follow Apple’s (suggested and not really enforced) rules, but wow are they so annoying to target. 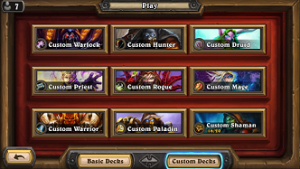 So whats the problem? Back when the iOS Human Interface Guidelines doc was created, determining a proper touch target size wasn’t very difficult. The original iPhone’s screen density of 163 pixels per inch(PPI) was well understood by most app developers. Back then, 44 pixels would have been .27 inches or .7 cm. Thats a little over 1/3 the size of an average adult finger(1.8 cm). Personally, I don’t think that is nearly big enough for a user interface touch target, but at least we had a minimum we could all agree on, at least in the iOS world.

The problem is that pixel count has stayed the same. Why is that a problem? Every new generation of iPhone we get has a higher pixel density. The PPI goes up which mean the minimum goes down in terms of actual size. At a PPI of 401, my iPhone 6+ could have technically legal targets as small as .11 inches(.28 cm). My target just shrank to less than half it’s starting size. With the iPhone 6+, my tap targets should be over 108 pixels just to get back to the unreasonable .27 inch target originally set by the guidelines.

I’m a pretty tall guy, so I can accept that my hands are a little bigger than some and maybe I am more sensitive to this issue than many. Be that as it may, we should be expecting tap targets to at least be as big as half a finger’s width. In 6+ terms, that would be in the neighborhood of 200 pixels. But really, beyond just expecting a single hard number, we should expect that Apple maintains a list of targets. They should have one for each device they support, or at least a physical size expectation. At this point, a document that is multiple years old is doing no one any good, and what is worse, it gives a defense for a poorly designed interface. 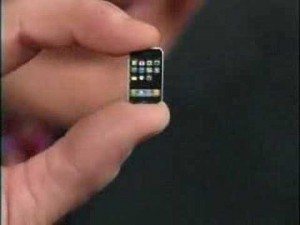 Going back to Hearthstone, it seems obvious to me that an updated design is pretty necessary. Even with the copious screen real estate my 6+ provides, some of the buttons are miniscule. The back buttons and deck choice buttons all clock in at just under 100 pixels and pulling up your friends list? 78 pixels tall (.2 inches). There are a lot of ways that a talented UI designer could squeeze more space out, and I am not really going to advocate for one over the other, I just want my taps to land where I want them to land.

I’m not really confident I can say who is to blame. I have big hands, the developer made small buttons, and the platform set a poor and easily misconstrued standard. We might all share a little in the blame but assigning blame isn’t really the point of this article. We have an outdated system, and there are more than just one game with unrealistic expectations of finger size. We should all agree that we can make a difference by challenging what society says a finger should look like and how small a button can be. We can do it together and all raise our fingers in unison and mash the keypad for a dialing wand! 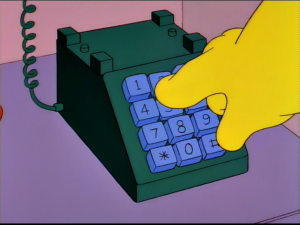