I still get surprised at the volume of Hearthstone(Free) news on the web every week. When I started this column, I was (very slightly) worried about having a week where nothing interesting happened and having to think of silly news to include just to make the column worth reading that week. Fortunately, I have the opposite problem as there’s so much out there that I have to pick and choose so I don’t overwhelm you. This week we have some interesting tip-related stories about playing Patron Warrior well and hitting Legend Rank, we have more proof of Hearthstone‘s increasing popularity, Tavern Brawl continues to entertain, and more. I even have a new section, Question of the Week. Well, shall we?

Since this is THE deck to play now, I thought I’d include an article by Avery (@avery) that talks about things you need to keep in mind when playing this dominating deck. Avery talks about the difficulty of piloting this deck because of its unforgiving nature; it’s very easy to miss lethals because sometimes the combos available can be tricky to spot. Here are Avery’s points in brief:

We often talk about how popular Hearthstone is, but it’s occasionally hard to quantify its popularity in any way. When you find a Guardian article on Hearthstone, well, that’s a good sign of the game’s popularity. The writer describes how Hearthstone‘s geekiness led to many industry insiders getting caught off guard by the game’s sudden and phenomenal success, and that includes Blizzard, too. The writer talked to some people from Blizzard and Hearthstone‘s development team to sketch out what turned out to be an interesting (albeit not completely unfamiliar) origin story for the game we all love to play. At the core of the origin story is Blizzard’s realization that the company lacked the competency to be experimental, so they pulled together a small group of experienced designers to create something outside Blizzard’s normal repertoire, and, thus, Hearthstone was born.

The designers describe how they were influenced by Starcraft‘s asymmetric nature of its races, where you have classes that feel and play differently but are still balanced, but it was tricky to do all that and still keep the game accessible and full of charm, which are Hearthstone‘s two designing principles. For the designers, this game needed to be one that “the first time you see this, you know how to play it, you know how to use it." According to Guardian‘s writer, the beauty of the game lies in its mix of charm, intuitive design, and reasonable depth. Of course, all these are augmented by its attractive aesthetics and the way the game mimics the physical space. Blizzard’s team talked about its decision to stick to simple emotes rather than chat because one of their primary concerns was offering a “very safe environment" for players while still helping the player feel that there’s an opponent sitting across the table. Also, Eric Dodds said that the clickable board idea was inspired by the movie Jumanji while Jason Chayes insists it was simply about offering a digital equivalent of the various habits we all have when playing games, such as shuffling our decks or sliding them around when it’s not our turn.

Overall, Blizzard feels happy with the game’s balance, and it’s happy they’ve only had to do small, incremental changes to the cards. The interview then goes into Hearthstone as an e-sport phenomenon and talks about how Hearthstone can be very engaging as a viewer sport – unlike Starcraft with its thousand clicks a minute. As for the game’s future, the team says it has no plans to add new classes as there’s a lot of design space to explore as is.

PVP Live has a great article up on the site with tips on achieving Legend Rank in Ranked play. Legend can be very hard to get as that rank is usually comprised of the top 0.5% of players in a region in any given season. So, here are some tips on how to ascend to the top:

I’m pretty sure you’ve heard every banana pun in the world this week after Blizzard decided to have this week’s Tavern Brawl be a Banana one. Unlike previous week’s Brawl with its pre-constructed decks, this week’s Brawl had players bringing their own decks to battle. The only change from a normal match was the various Banana cards players would receive every time a minion was killed. The Bananas gave a minion +1/+1, +2/+2, swapped a minion’s Attack and Health, or dealt 1 damage. While most people were initially disappointed at what appeared to be a boring Brawl, soon enough people started experimenting with various decks in an attempt to make the most of the Bananas. Yes, this Brawl had plenty of Mages and Aggro decks, but it also produced some fun matches with huge, buffed minions. GosuGamers even started a tournament, the Tavern Brawl Open, that created an organized way for people to battle each other in the Tavern Brawl mode. Even though no award was given, the Open provided plenty of fun moments for its participants and showed how Hearthstone‘s new mode can help expand the game’s possibilities even more.

Bretty Farrow gathered some great data regarding streamer stats for May, and he found some interesting surprises. No new content was released in May, so May’s viewership numbers were expected to be lower than April’s; instead, we had a 6.5% increase that broke the record set last month. Kripp continues his reign as the streamer with the most viewers with Amaz and Trump second and third. From the data, it looks like Hearthstone‘s viewing numbers are going up, and as long as the game stays fresh with more content and modes coming our way, I don’t see this trend changing any time soon.

Hearthstone continues its commercials, this time with Madder Bomber being called in to seal the deal, only for RNG to knock his whole team out. Second commercial in a row that “celebrates" Hearthstone‘s RNG. Interesting, isn’t it?

And the Champion is…Kolento! (of course). The Ukranian beat Noxious 4-1 in the finals and added another trophy to his already-huge collection. If you don’t know Challengestone‘s format, this tournament is organized by Kripp, Tempo Storm, and underflow, and it sets a deck-building challenge for the participants. This week’s challenge was a True Highlander: Each player had to bring three decks, all of them of the same class, and across all three decks, every card was allowed to only be used once. The contestants had 35 minutes to build their decks and then went on to battle each other. The matches were fun (although not as fun as Challengestone #1) with both semifinals ending 3-2. Kolento won the whole tournament with three Shaman decks (Mech, Murloc, and a Control/Deathrattle Hybrid) while his opponent in the final brought three Priest decks (Aggro, Mech, and a Control Variant). Noxious’ Aggro Priest took out Kolento’s Control deck, but then Kolento beat the Priest deck with all three of his decks. The Murloc vs Mech match was especially fun to watch as Kolento was all but done until a Lava Shock came to his rescue. Shaman, apparently, seems to rule the one-deck formats.

Hearthstone is returning to Finland’s premier e-sports festival, Assembly, at the end of July. Hearthstone and Starcraft 2 players will compete for a cumulative prize pool of $40,000. Now, what’s interesting is that $25.000 of those will go to Hearthstone competitors, which means that in only its second appearance at the tournament, Hearthstone will offer more money than Starcract 2 (which has been at the tournament since 2011). Not bad for such a young game. The tournament will also offer Blizzcon points on the same level as Viagame House Cup and ESL Legendary series.

Archon Team League Is Coming Up, and It Looks Great 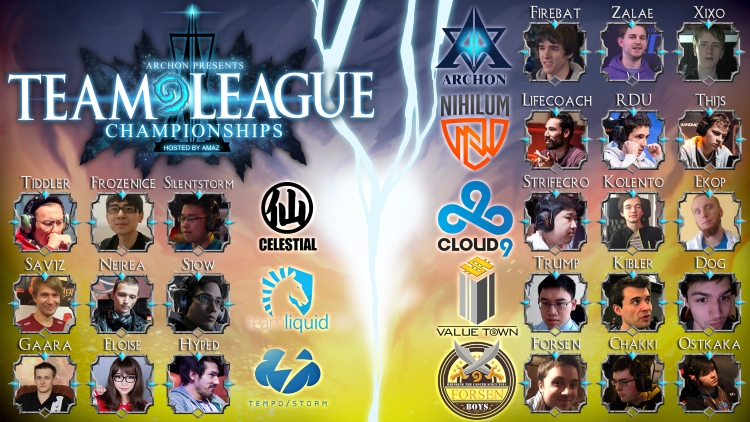 On July 1st, the Archon Team League Championship will start, and after seeing the line-ups, I am very excited. Eight three-member teams will go through a Round Robin Qualifying Phase with the top two ranked teams going straight to the live finale. The two remaining spots will be contested in a Satellite Round where the 3rd, 4th, and 5th ranked teams, along with the winnder of the Redemption Round (6th vs 7th), will fight for a chance to reach the finale. This tournament is bound to have some great matches, so make some room in your schedule if you want to see the best play the best. The teams are: Team Celestial, Team Liquid, Tempostorm, Team Archon, Nihilum, Cloud 9, Value Town, and Forsenboys. The image above shows all the team members, and you can see that this tournament includes the cream of the crop of competitive Hearthstone. The price will be $250.000, so not bad at all…

Tempo Storm continues to provide excellent information on the current meta. According to the team’s Snapshot, Patron Warrior continues to dominate, with Malylock firmly holding second place after a strong DreamHack Summer performance recently. Imp Gang Boss and Acidic Ooze are the recent additions to Malylock, which have raised the deck from strong to very strong. Imp Gang Boss’ resistance to AOE clears makes him a very important mid-game card for this deck. However, it does risk helping Grim Patron’s multiply, but that’s negated through the use of many removal cards that take care of the spawning Patrons.

Acidic Ooze is teched in to prevent Death’s Bite combo turns and reduce the damage potential of Hunters and Paladins. The other three decks in Tier 1 remain the same for predictable reasons (Control and Mid-Range decks are all the rage currently). As Tier 2 lists shows, you should still be afraid of Face Hunter, Handlock, and Zoolock because even though they might not be Tier 1 at the moment, they are still quite common and very dangerous. Poor Dragon Paladin continues its life all the way down in Tier 4, but who knows, maybe the next expansion will help the deck a bit (I hope). 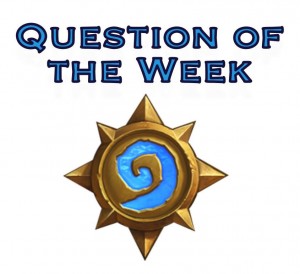 I’ve decided to try out a new section of Touchstone Tavern, a “Question of the Week" so you guys can get involved more, if you so desire, of course. Let me know if you like this idea. I’ll start with a pretty basic one, and we’ll go from there.

What Kind of Deck do you Enjoy Playing (Aggro, Control, Combo, etc), and Why?

People Enjoy Train Wrecks, So Let’s Watch Some Arena Ones.

Kripp On Playing Hearthstone on the Phone

Hearthstone Science! Or, An Analysis of When Minions Die

I hope you’ve enjoyed reading today’s Touchstone Tavern. I will continue on my mission to make you the best informed players in the history of the WORLD (ok, maybe in the history of Hearthstone). I will see you all here next week with more news, videos, and commentary on the world of Hearthstone. Till then, why not give Malylock a try?