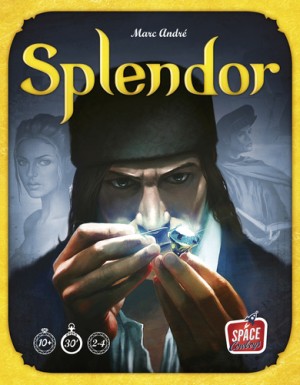 We haven’t had a good board game port on iOS for a few months now, and I’ve been itching to get my hands on one. Apparently, the board game gods have decided to heed my request and will drop Splendor on the App Store very soon. Splendor, developed by Days of Wonder, first released in 2014 and has become quite popular in board game circles. It has received the 2014 Golden Geek “Board Game and Family Game of the Year" from Board Game Geek, the Best Board Game 2014 from the UK Game Expo, and nominations for the German Spiel des Jahres and the French As d’OR. The game is a chip-collecting and card development game where players take the roles of Renaissance merchants trying to buy gem mines, means of transportations, and shops with the goal of acquiring the most prestige points. The game promotes player interactions as you can “reserve" a card to stop an opponent from getting it.

Asmodee, the game’s publisher, in a recent interview over at Board Game Geek provided more details about the upcoming port. The iOS app will be universal and highly customizable in terms of fonts and UI. While Asmodee won’t include an online multiplayer mode at launch (it might appear in a future update), Splendor will offer a Pass-and-Play mode for up to four players. Normally, I would see the lack of online multiplayer as disappointing, but, to be honest, the faceless online multiplayer modes of most iOS board game ports don’t excite me all that much.

The game will include two solo modes, the classic “Against the AI" mode and the new “Challenges" mode, which will play as a puzzle mode of sorts. Asmodee seems very excited about the port’s art design as it will use exactly the same graphic materials as the board game and will strive for a feeling of tactility. Going from what I see in the trailer, the game looks quite nice. Splendor will release on July 9th, so keep an eye out if you enjoy good board games.