This week’s Final Fantasy: Record Keeper (Free) event takes us back to the world of Final Fantasy VIII and the epic battle against the Sorceress Edea. Balamb Garden: The SeeDs of Conflict not only offers the opportunity to unlock two more heroes of the game but also their memory crystals (assuming you pass the Elite Dungeon tests). Before you go forth and recall the record of one of the world’s most emo heroes (…whatever), let’s take a closer look at the event, its bosses, and the heroes themselves.

Balamb Garden: The SeeDs of Conflict 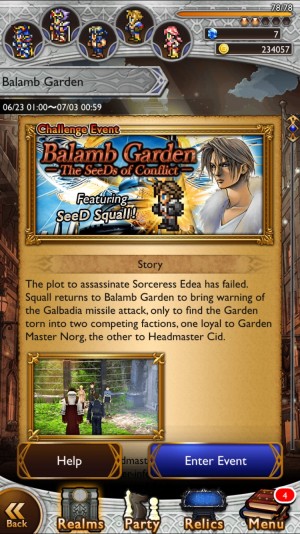 Another Challenge Event, Balamb Garden has you jumping through about a dozen separate battles with progressively more difficult enemies and bosses. Irvine and Squall are obviously the big rewards in this event, but there are a few other rewards worth taking notice. From the Classic Dungeons, you won’t see much more than low level FF8 equipment, 2-3 star Orbs and Eggs and the occasional Mythril. A few levels do throw some abilities at you, such as Aero Strike and Magic Break.

As you get to the Elite Dungeons, the rewards get a bit more interesting. Orbs of 3 and 4 star rarities are met with a Barrier Ring and White Cape (the only cool accessories that can be earned). Of course, as you get towards the end of the battles, you can earn a few 5 star orbs and upgrade materials, but otherwise, there isn’t much here that you’ve already seen.

The good news about this Challenge Event is that the vast majority of bosses don’t really have any secondary objectives other than to win without KOs (sometimes easier said than done on Elite). Still, each boss has its own vulnerabilities and we’ll run through those for each boss below.

Training Facility Entrance – Granaldo is vulnerable to Wind and Resistant to Poison. He also doesn’t have any attacks other than physical so just pile on the hurt and you’ll eventually take him down. 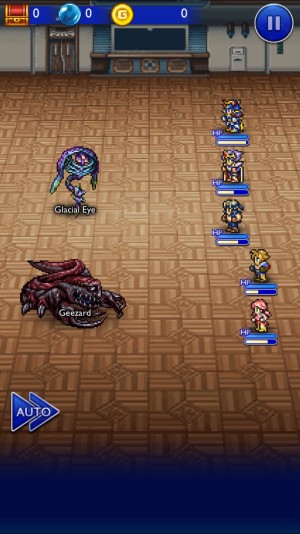 Secret Area – Archaeosaur’s attacks are physical damage to one, or physical damage to all. Otherwise, he’s vulnerable to ice and is strong against poison. On Elite he’s a bit tougher, so try and get intimidate or dark buster on him at the start to minimize his tough attacks.

MD Level – Level 3 – Oilboyle has one additional secondary objective to exploit his weakness to fire (he’s also resistant to Water). If you can land poison, sleep and silence then you’ll be in good shape to take him out (silence in particular as it neutralizes his counter).

Master Room – Norg is one tough boss, and it’s fitting since he’s the last one for the challenge. He’s made up of four parts: Norg himself (vulnerable to wind, resistant to poison), the Norg Pod (Resistant to Poison and Lightning), the Right Orb (Resistant to everything but Dark) and the Left Orb (Resistant to everything but dark as well). The way he works is the Left and Right orbs constantly change color. If one gets to red it’ll unleash a powerful magic attack. However, you can reset the colors by hitting it. So you’ll want to keep a few folks on color duty making sure they never get red. Meanwhile, you have to take out the Nord Pod before Nord himself shows up. Afterwards, it’s just a matter of doing damage while keeping the color pods in check. He has an insane amount of HP in Elite so just be patient and stick to a set plan.

Irvine and Squall at a Glance

Before we get started on abilities and equipment, let’s talk stats for a little bit. Squall is primarily a physical damage dealer as evidence by him being in the top of three of currently released characters in terms of Attack. He’s also pretty high up there in terms of HP. Meanwhile, his defense is pretty low while his Magic, Speed, Mind and Resistance are pretty middle of the road. 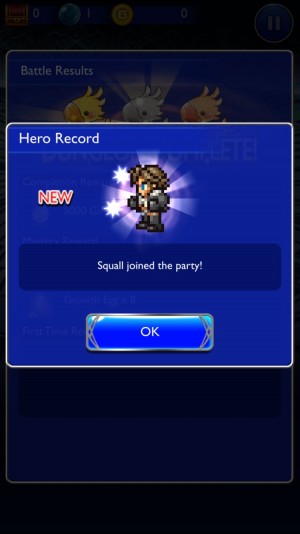 Irvine meanwhile isn’t so great in anything other than Mind (where he’s at least in the top ten). However his ability to wield guns is pretty unique, along with four total ability categories (Black Magic Level 1, White Magic Level 2, Combat Level 3 and Support Level 5). Otherwise, Irvine can wield a Dagger, Hat, Light Armor and Bracers. On the Soul Break front, Irvine’s is pretty cool, which fires successive shot attacks while his special Soul Break (which requires the Valiant) can fire ten shots in a row.

In terms of use, I’d obviously keep Irvine in the back with a Gun and focus on support abilities while I’d take advantage of Squall’s high attack and Spellblade abilities. Of course, Squall’s Combat abilities will eventually be the end game if you’re at the point that you can create those. Regardless, Irvine is a decent Wakka replacement (although I’d still rather have him or Tidus on the back line) while Squall feels like a more powerful Celes (although she still has the advantage with Rarity 5 Spellblade abilities).

Balamb Garden is available for players through July 2nd so there’s plenty of time to get both Irvine and Squall (and their Record Crystals). If you’re looking for more tips on how to get through the later levels of Elite, check out our awesome forum thread. Meanwhile, we’ll be reporting soon on the major content update that accompanied this limited time event.