After an event that lasted a big longer than most normal limited time events (most likely due to the debut of Memory Crystals as well as the Festival of Gold which replaced the normal content), Record Keeper (Free) is back to its normal schedule of weekly limited events. For this event, entitled Princess of Alexandria, Record Keeper debuts content from Final Fantasy IX for the first time and offers some pretty cool high end rewards for players with the skills (and equipment) to pass them. As is the custom, we’ve run through the content and have some tips for players looking to unlock as much of the content as available. 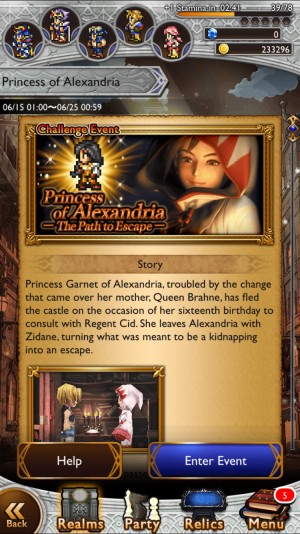 Princess of Alexandria is a Challenge Event, meaning that it consists of a set number of pre-established challenges with rewards at the end of each challenge. It’s very straightforward and once you’ve beaten all the Classic Dungeons players have the option to up the ante in the Elite Dungeons. As is this the case,

The Princess of Alexandria event is pretty cool because it offers four major things to unlock. The first two are character records, namely Vivi Ornitier and Garnet Til Alexandros XVII while the other two significant unlocks are their Memory Crystals. This event also marks the first time that Final Fantasy IX characters are available to use, which is another watershed moment for the English release of the game.

From a loot standpoint, Princess of Alexandria offers its fair share of cool items, but nothing that I particularly thought was absolutely essential. Obviously you’ll want to play through the entirety of the Classic Dungeon (like previous events, it’s pretty easy to get through) to pick up the heroes and Memory Crystals, as well as the decent amount of Mythril thrown at you. Otherwise the coolest stuff you’ll see is a few three star pieces of equipment and various orbs.

The Elite Dungeons is where all the cool stuff is at (along with all the difficulty). Greater Growth Eggs and 4 star weapon/armor upgrade materials consist of the majority of the rewards while a Major Summon Orb and Greater Earth/Holy Orbs await those that get through most of the elite battles while a Magic Armlet (4 star accessory) is the final reward of Elite. If you do in fact finish that last battle, you can unlock one Bonus Battle which awards a Major Earth Orb, Growth Egg and the summon Carbuncle. 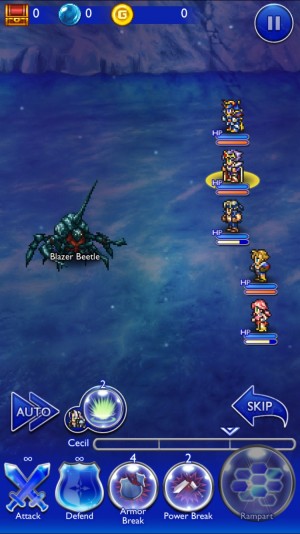 There are a fair amount of bosses in this event, and as always we’ll highlight some of the key vulnerabilities as well as any extra objectives you’ll need to do to get a perfect clear. These general tips will work on Elite as well, with the understanding that you’ll going to need to have some excellent, synergistic weapons and armor as well as

Ice Cavern – Icy Path 1 – Wyerd is vulnerable to fire and immune to ice. Interestingly, he’s also only immune to confuse in terms of debuffs. This means that if you the ability to cast death or petrify, it’s pretty much game over. Hitting him with Fire satisfies the secondary objective.

Ice Cavern – Ice Pillars – Ghost is the sole boss on this mission. He’s vulnerable to Wind and Holy attacks (which each satisfying a separate objective) which immune to Dark. Keep in mind Cure spells don’t count as Holy attacks so use Dia or Holy instead. Also, similar to Wyerd, Ghost isn’t immune to most debuts so try Death or Break for the potential of a quick finish. Otherwise, he uses Fira and Thunder as well as normal attacks to dish damage.

Ice Cavern – Icy Path 3 – Mimic is weak to Holy attacks so again, use Dia or Holy to satisfy that secondary criteria while avoiding Dark damage as he’s resistant to that element. Abilities include a poison attack as well as a move that deals decent amount of damage to a target while restoring HP.

Ice Cavern – Icy Blossoms – Nymph is weak to both Dark and Fire attacks which are separate secondary objectives in this battle. This is also the first battle that felt particularly tough for me on Elite. Keep in mind that Dark objective is for actual Dark elemental damage and NOT the Physical Attack that causes blindness. From a move standpoint, Nymph doesn’t have a lot of variety and limits herself to Fire damage, and damage dealing moves (one can silence, as well).

Icy Cavern – Waterfall – Black Waltz I & Sealion are pretty tough. Objectives include defeating the bosses without being KO’sd and winning without Garnet and Vivi being KO’d (both are separate and obviously require them to be in your party). Black Waltz I is vulnerable to Fire and Ice while Sealion is vulnerable to Fire, absorbs ice and is resistant to Earth and Water. Both primarily deal Ice and Fire damage as well. If Sealion is defeated first, Black Waltz will summon another during its next turn. These two are immune to most debuffs so the easy spells usable on previous bosses won’t fly here.

Ice Cavern + – This is a boss rush so most of the tips above should apply.

Vivi and Garnet at a Glance 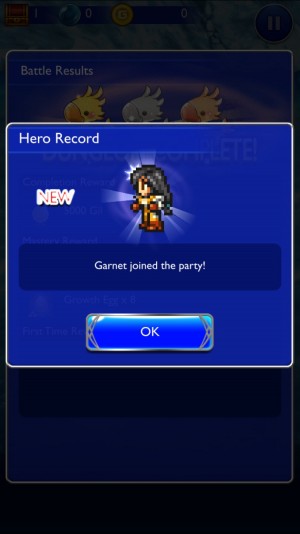 As you might expect if you’re a veteran of Final Fantasy IX, both Vivi and Garnet are magical powerhouses. In fact, Vivi is by far the most powerful magic dealer at max level, while Garnet is at a respectable fifth place. Both newcomers also have excellent resistance as well. In return, these two have little in terms of Attack or Defense. Garnet also has a pretty high Mind, making her a good hybrid mage similar to Vanille.

In terms of abilities and equipment, Vivi is a pretty barebones magic user that can only use the standard mage equipment (Dagger, Rod and Staff for weapons, Hat, Robe and Bracer for armor). He’s also restricted to Black Magic (up to rarity 5 at least). Vivi’s default Soul Break is Focus Magic, which raises his Magic state temporarily while his special Soul Break is Doublecast Venom, which does what it sounds.

Garnet shares Vivi’s equipment possibilities but differs greatly in terms of abilities. Instead of Black Magic, Garnet dabbles in White Magic (Rarity 4), Support (Rarity 2) and the all-important Summoning (Rarity 5). Her default Soul Break is also pretty awesome and raises the entire party’s attack for a little while. If you’re lucky enough to find her Soul Break Equipment, it can change to Judgment Bolt which summons Ramuh to deal lightning damage.

So how should you use these two? Well, if you’re looking for straight magic damage, you can’t do any better than Vivii as he’s at this point he’s the best magic damage dealer in the game. Meanwhile, Garnet is a much better version of Rydia and I’d suggest making her your primary summoner if you’re looking to have one in your team.

Princess of Alexandria is only available until June 24th so players are highly encouraged to get cracking. Also, feel free to check out the awesome Record Keeper thread in our forums for more specific tips and tricks on battles. Meanwhile, be on the lookout for our next bit of Record Keeper news as we cover the new permanent content additions.