The more I think about it, the more I see similarities between the Apple Watch and 4×4 Jam HD ($1.99) by Invictus Games. Hear me out: They’re both extremely beautiful, if a little clunky. They’re both undeniably fun to play around with, though a bit frustrating at times. But most importantly, in both cases the developers of these two very different products clearly have some cool ideas, and it’s easy to see them transforming them into something truly special with a little more love and a few more updates. Yes, I just compared a state-of-the-art piece of wearable consumer tech to a mobile game that costs a dollar. Deal with it bro.

Now, for the most part, 4×4 Jam HD is a pretty traditional racing game. You’ve got a quick play mode and a career mode, with events ranging from standard lap-based races to elimination matches (or “Knock Out”, according to this particular game). However, this being an off-roading affair, there are also modes like “Gate Hunt” and “Collector”, which both see you flying over rough terrain to reach specific points in the map before your opponents do. Unfortunately, that’s where some of the frustration starts. 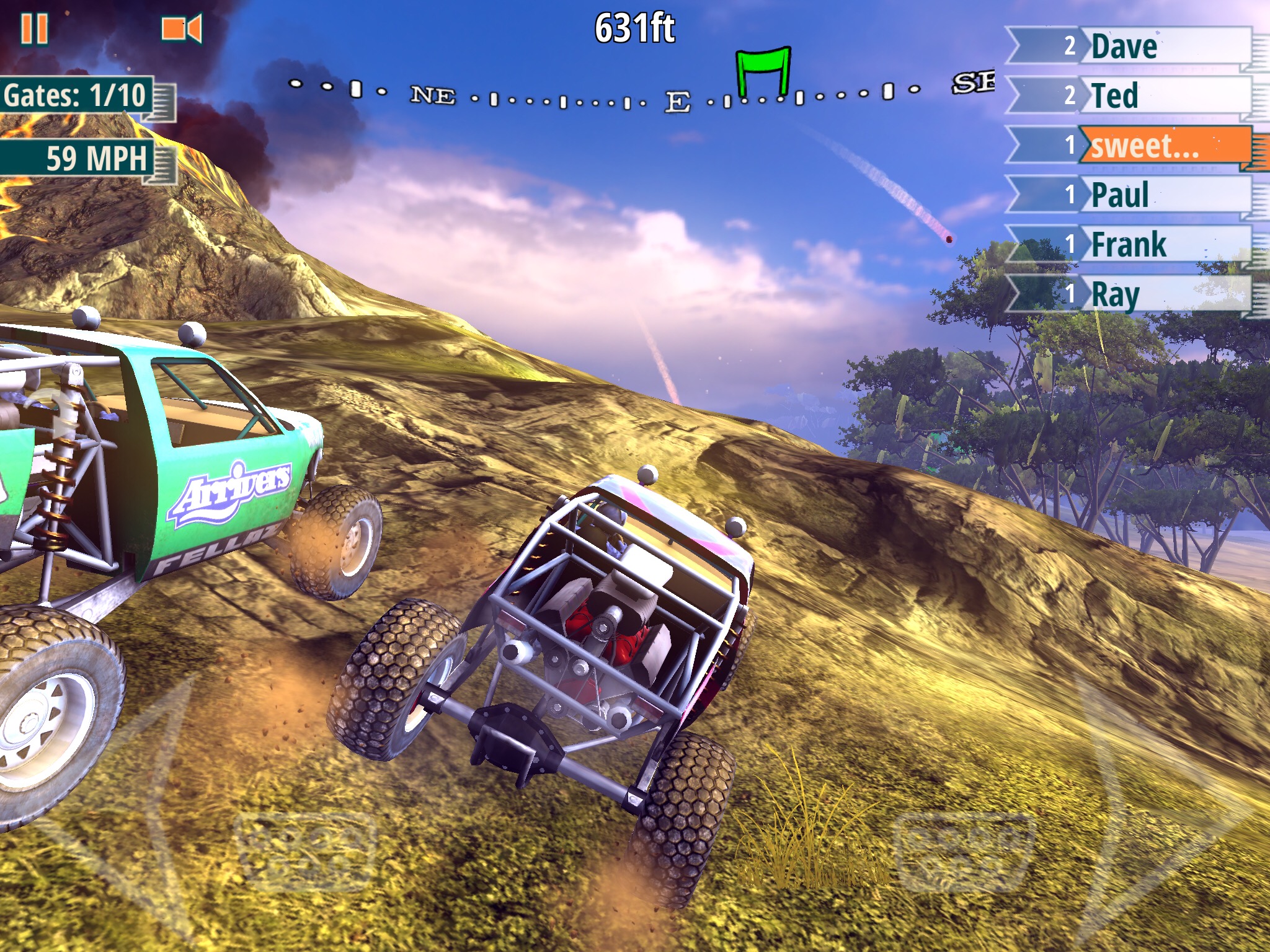 Whereas the regular races are mostly fun, challenging, and exciting, the more off-roady aspects of the game are sometimes pretty rage inducing (which is especially disappointing considering that’s the primary focus). Take the “Gate Hunt” mode, for example. You and your adversaries are tasked with racing through a series of gates as quickly as possible, with one point awarded to the vehicle that goes through each one first.

The problem is, it doesn’t really seem to matter how fast you go or how much control you have over your truck. The gates are spread out so randomly (and pop up one at a time so you can’t anticipate them) that even if you go through one first, there’s a good chance someone else is a lot closer to the next one. It ends up being kind of a crapshoot, and the only way to pass these events reliably is to just keep doing them over and over until you happen to be close enough to more gates than your opponents. 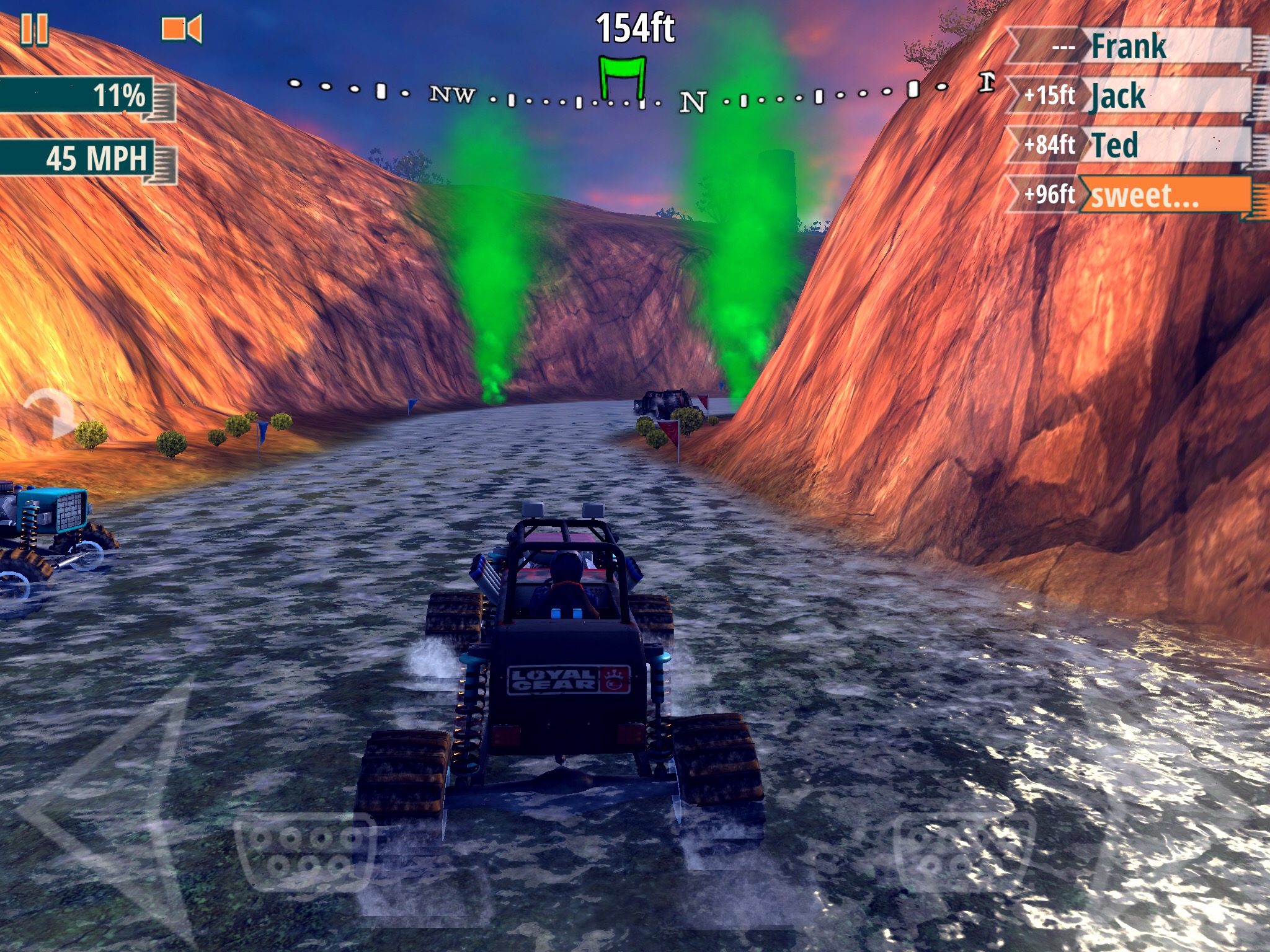 Making things even more frustrating is how the vehicles handle on the lumpy terrain. I mean, I get it, it’s supposed to be off-road and all. But when your wheels hit the tiniest little bump and it sends your truck into a perfect 180 right before the finish line, there’s just no way that feels good on any level. Despite this, the game controls pretty well, with a pretty generous suite of options straight out of the Real Racing series. You’ve got your auto-gas options, your braking assists, your tilt-or-touch. It really comes down to your own preference, and they all work as advertised (though personally, tilt was a complete nightmare when coupled with the unreliability of driving over the bumpy terrain).

It must be noted that the “problems” with the more off-road focused events are only frustrating if you’re, ya know, trying to win. I can’t deny how magical it feels–particularly later in the game–when you’re literally flying over hills and volcanoes (and opponents) at break-neck speeds, gates be damned. And that thrilling feeling of being just barely in control works incredibly well in the more traditional racing modes that rely slightly more on skill and less on just happening to be at a random part of the map at a certain time.

Speaking of volcanoes, can we just stop and talk about how amazing this thing looks? It’s easily one of the most gorgeous racers on the App Store. I’m not just talking about pure graphical power, either; the landscapes are breathtaking, the vehicles all look incredible, and even the menus have a wonderful sense of style. There were several moments during my time with the game that I stopped to take screenshots–not just for this review, but simply because I wanted to have them. Unfortunately, with all this visual intensity comes a pretty significant hit to the framerate. It’s not game-ruining, but it was definitely noticeable on my iPad Air.

Despite my issues with Invictus’ game, though, I have to admit it still winds up feeling pretty special. Maybe that’s because there aren’t a lot of off-road racers like this on the App Store, and I’m inclined to forgive some of the game’s more frustrating elements just because the thing exists at all. Whatever the reason, 4×4 Jam HD certainly earns every word and abbreviation in its name, and for that alone it’s easily worth the price of admission.