I know Pixelbite’s focus has been making racing games all this time, but man, was the world of dual-stick shooters missing out. Xenowerk (Free) is a more traditional dual-stick shooter affair than Space Marshals ($3.99), a more tactical shooter with stealth elements. Regardless, this is a ton of over-the-top fun. If you want a game that lets you blast a bunch of bugs into gooey puddles, rewards you for playing well, supports MFi controllers, and will push your device to a degree that will make it an effective hand-warmer in the wintertime, you’ll love Xenowerk. 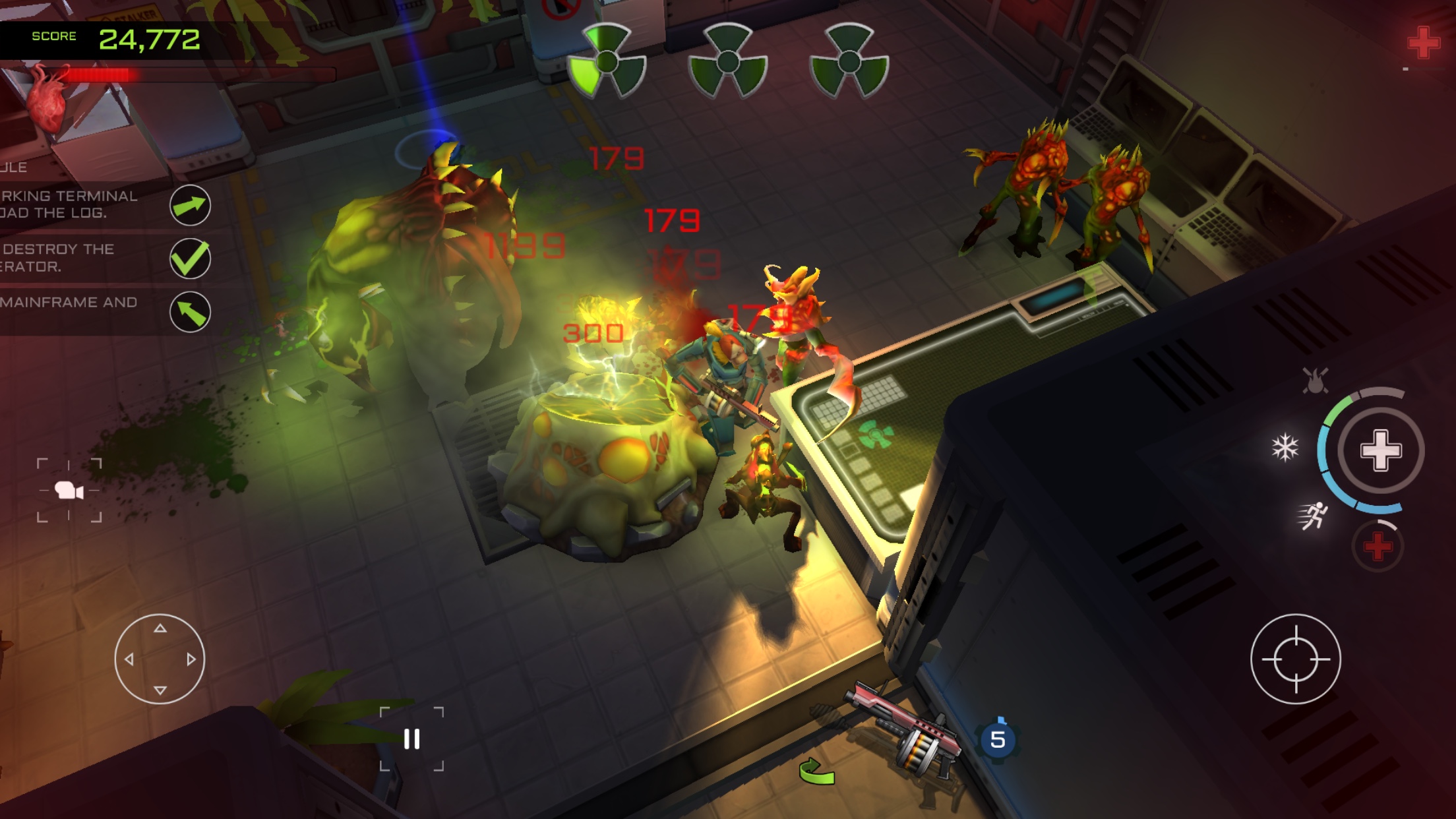 Each level has a bunch of objectives, but they’re not exactly mentally tasking: they usually involve going to a spot and activating a switch, blowing up an item, or defeating a large enemy. They’re just excuses to blast mutants. You’re pretty much just trying to get to the end of the level without dying too much, as you have a 3-star system to keep track of, and a 1-star penalty for dying. The game rewards killing enemies in quick succession, as you get combo bonuses for consecutive kills within a short amount of time. Every 5 of these chain kills rewards you with a bigger bonus, so getting a lot of points requires racking up a big chain and the massive bonuses you get from it. And this is a game where getting three stars isn’t an automatic reward for doing well. No, three stars is something you have to earn. You need to go for those large chains when possible, and knowing where the next closest enemies are on the map will help you out a lot in this goal. Wiping everyone out will get you 2 stars, but 3 stars is an accomplishment. You lose a maximum star for respawning, so this makes dying once on a level you’re just trying to complete not such a big deal.

You earn coins while playing to spend on new weapons. There are in-app purchases for more money, but these are definitely not a problem. You earn more and more money as you advance, and weapons are definitely powerful enough that you’re probably doing yourself a disservice if you buy IAP. Well, unless you want to buy every weapon and don’t care for grinding in any form, I suppose. The progression lets you enough money to get powerful enough weapons for where you’re at in the game. Plus, the weapons level up and get better stats at a speedy rate. I never felt like I was fighting the game to get better. 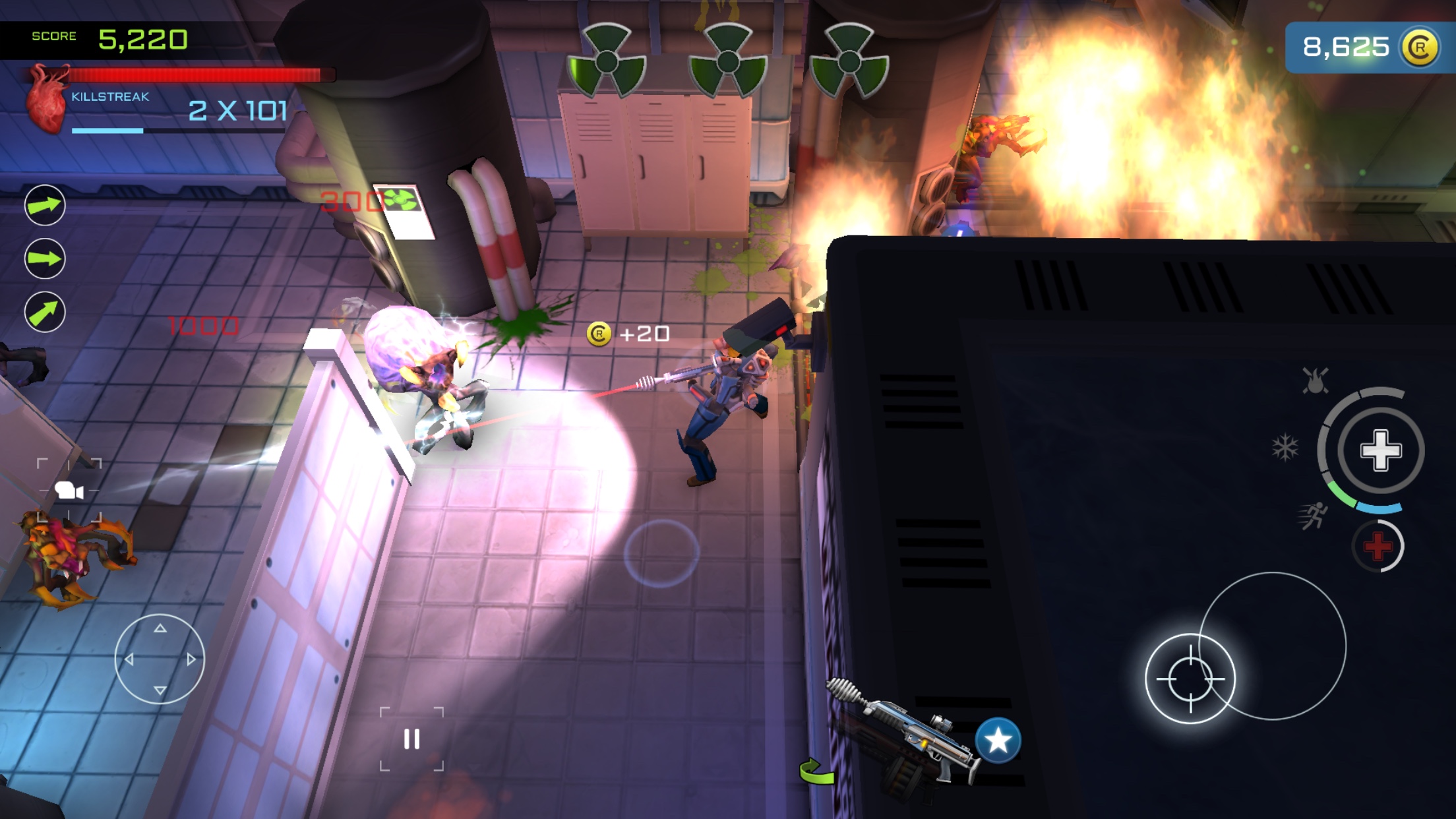 While this is a frantic shoot ’em up, you will need to keep an eye on your weapons. You have unlimited ammo, but your guns will overheat in battle. It’s not a nuisance, just more of a “oh, I need to switch to the other weapon now, huh" situation. You could use two guns of the same type, a “secondary weapon" is literally just the other weapon you want to use. I prefer to go with a rapid-fire gun as my primary, and an explosive one as my second, when I need to deal damage to multiple enemies at once. Play your way! And don’t worry about running out of ammo. You also have five abilities to use, with more unlocking with later armors. These can heal you, speed you up, freeze enemies, eliminate weapon cooldowns, and increase damage. They can be used an unlimited number of times, just with recharge timers between uses.

Xenowerk comes with MFi controller support, which is quite welcome. The touch controls work well enough, they’re standard dual-stick fare. You can tap the right stick in battle to switch weapons, which comes in handy when one weapon is overheated. The camera does swing around with the protagonist, so you’ll be tapping the camera-centering button at times to get a better view. If you liked Space Marshals‘ controls, you’ll like the ones here. The game feels a lot better with a controller, but that’s just true of many games, I suppose. I do wish the center camera button was on the unused L2 trigger instead of on the Y button, but it’s not a huge deal. This is definitely a showcase game if you have an MFi controller. 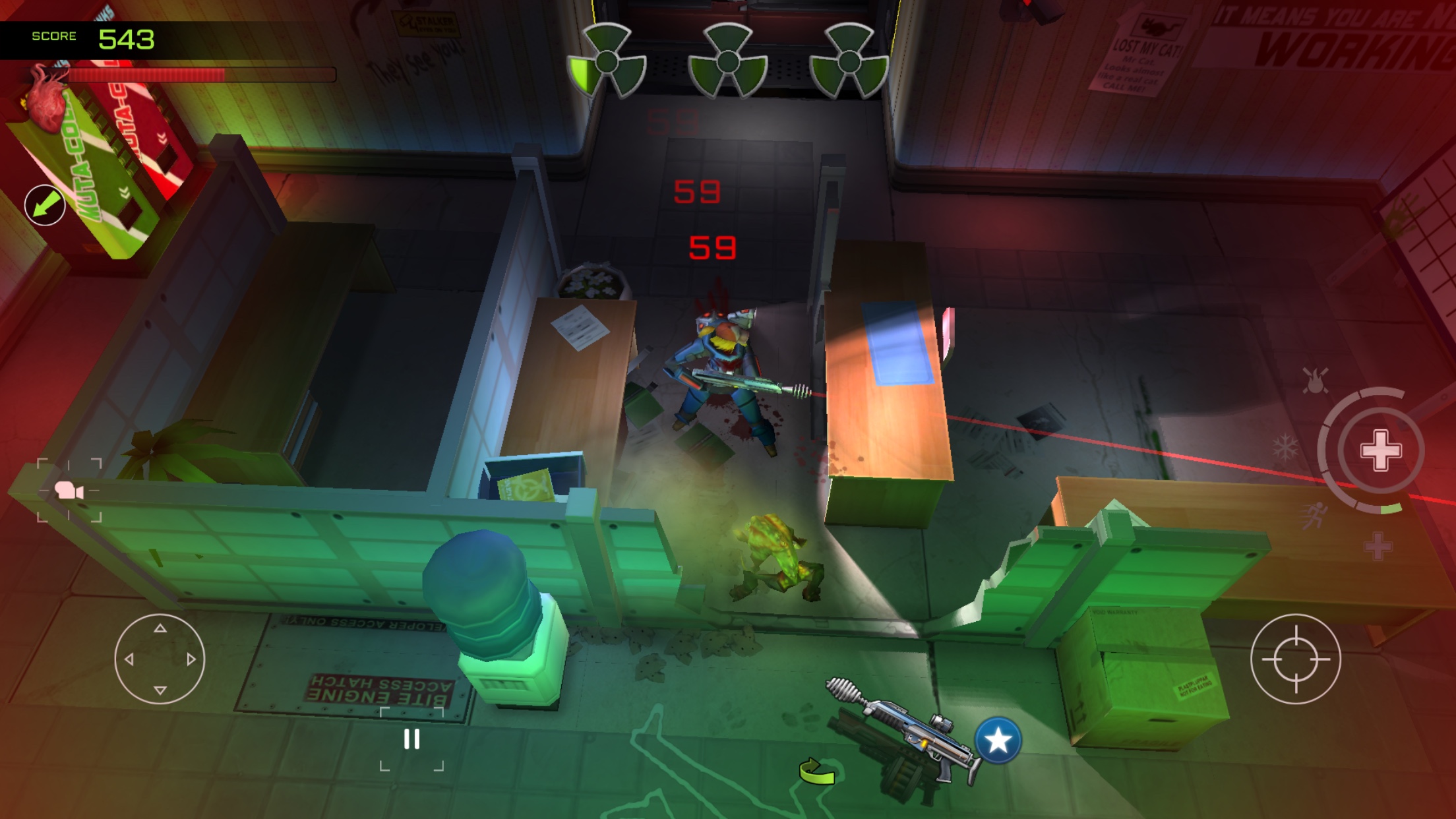 Xenowerk boasts 50 levels, spread across three worlds. These levels are pretty much the same, just differing in size and difficulty across the worlds. It’s not a game with a lot of variety, but does it need it? It’s a game that’s all about running around, making a bloody mess, and being rewarded for doing so. I got a 52x chain on one level, blowing up enemies with a flaming grenade launcher, using abilities to fire rounds as fast as I could, and to run from one group to another. I felt amazing. It also netted me an instant three stars, which felt satisfying because it is such a difficult feat. Then I had to worry about not losing that third star by dying!

Buying new weapons and upgrading them is fun. It’s just a game that’s meant to make you feel cool while playing it, and it does the job. You can play this game one mission at a time, or for hours at a time. Well, “hours" if you are plugged in to your charger. My iPhone 6 Plus while plugged into the standard wall charger stayed at its same battery level while playing. An iOS game hasn’t made my hands this warm since Radiation Island ($2.99). Thankfully, there’s functional iCloud support.

If you want a game where you can just run around and shoot a bunch of gooey mutants, and enjoy doing so, check out Xenowerk. You won’t be disappointed.