Poor old Nubs. He had defied the odds of the modern economy and purchased a nice house with a great view and plenty of land to build on. Sure, the land taxes were a bit tough to manage each year when tax season came around, but he had things sorted out nicely for the most part. Then one day, a couple of guys swing around, kick him out of his house and off the nearby cliff, then burn the whole thing down. I mean, are debt collectors getting rough these days or what? Luckily, a fairy offers to help you rebuild a home in a new, even better location. You’re just going to have to grease the wheels a bit with some fairy dust, which can be extracted from crystals that are just laying around the world, protected by deadly monsters, cunning traps, and treacherous terrain. All things considered, it’s probably still safer than a bank loan. 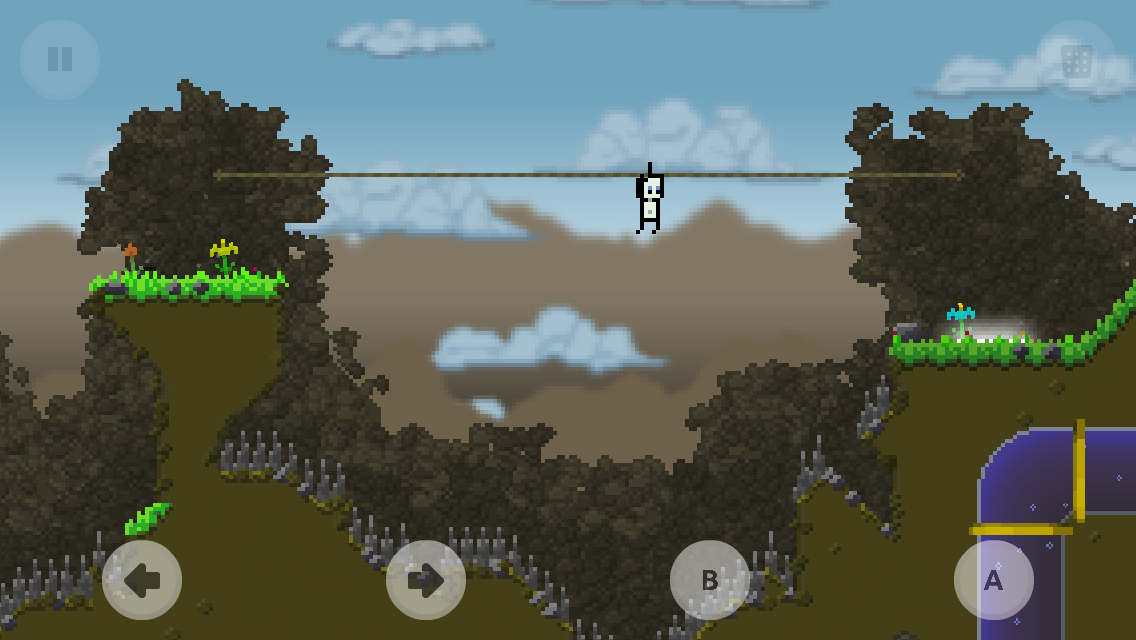 Nubs’ Adventure (Free) is an exploratory platformer that has you searching around a large world for crystals to rebuild your house. Although the game’s world is non-linear, you’ll come across plenty of locked doors and impassable obstacles that you’ll need to come back for after finding the appropriate keys. Nubs himself starts off with nearly every ability he’ll ever have, save a weapon you’ll find early on. He can jump around nimbly, operate all kind of machines, and communicate with a couple of helper friends who show up in certain locations. He’s a bit fragile, so you need to be careful about taking hits, falling too far, or staying underwater too long, but controlling him is a lot of fun and he’s more than capable of besting the challenges ahead of him.

This is a rare example of a game where I have something nice to say about almost every part of it. The visual presentation is great, with each of the four main areas giving a different vibe through a lush color palette and a few pleasant little touches. Sure, the art is pretty simple, but I think the game manages to jump off of that rather than being dragged down by it. There’s an odd bit of warm surreality to the art style that works well in combination with the music. The soundtrack is really mellow, but it does a wonderful job of pulling you into the world a little bit more. I really appreciate the way the level design challenges you without asking you to do anything too wild. It’s also really good about leaving some kind of reward whenever it suggests secrets. One of the things I always do in games like this one is to try to get to places where I’m not supposed to go. I got myself stuck a couple time in Nubs’ Adventure, but an overwhelming majority of the time, there was a crystal or new path waiting for me as a prize for my curiosity. 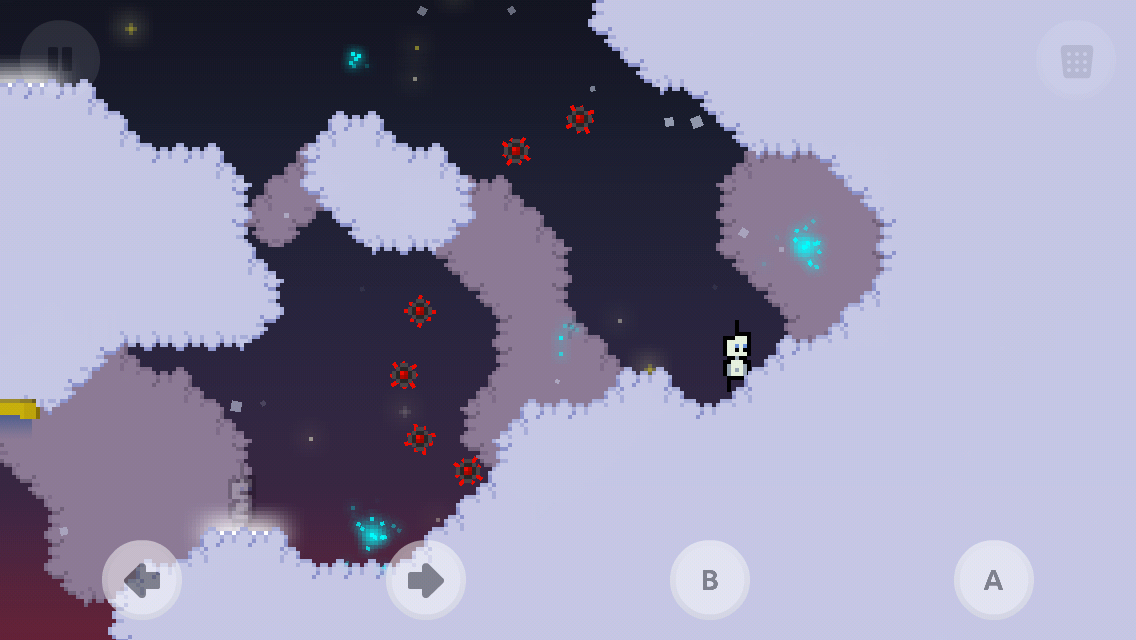 It’s a surprisingly lengthy game for the genre, too. I lost track of the time while playing, but it couldn’t have been any less than three hours by the time I made it to the end, and it may have been longer than that. Thanks to the wise implementation of teleporters to move you quickly around the world, each mini-goal ended up easily bleeding into the next. I’d find some new key to try out, zip back to an earlier part to find a few crystals, stumble across a new path that sometimes led to a new key, and so on. You can stop playing at almost any time thanks to an abundance of checkpoints, but it’s very easy to keep pushing yourself for one more crystal or one more screen. It’s impressive that it manages this without giving the player many new abilities. Most Metroidvania-style games depend on this drip-feed of new actions to keep monotony from setting in, but Nubs’ Adventure goes the difficult route of varying the level challenges instead.

One of the ways it mixes things up is with Nubs’ friends. In certain areas, you can communicate with a giant worm or a tiny wisp. When you do, you’ll take control of them temporarily. The worm can basically crash around wherever there’s dirt to dig through, and will explode out of the ground with powerful force, enabling it to reach places Nubs can’t. It’s a little tricky to get the hang of controlling at first, but that kind of makes sense. The wisp, on the other hand, is a tiny little speck that can float around freely. It can pick up Nubs or other objects to move them to a location that might otherwise be inaccessible. The sections with these characters are a lot of fun and spaced out just right to make them feel like a treat whenever you stumble across them. 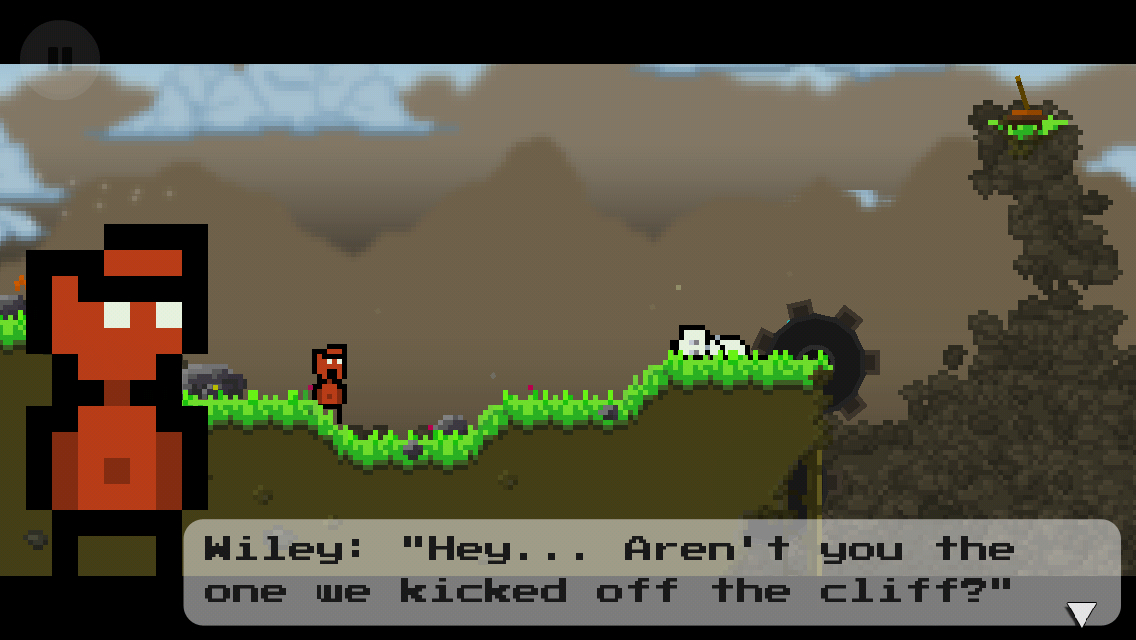 That’s not to sell short the sections where you control Nubs, mind you. There are plenty of interesting gimmicks in his areas, even though many of them, like portals or disappearing blocks, have been seen before. The game uses a combination of these gimmicks and increasingly dangerous enemies to keep things fresh the whole way through. There are also a few boss battles to break things up, and they can actually get pretty tough. The last boss was a bit of a pain before I figured out exactly what I needed to do, but hey, it’s a last boss. They’re not meant to be easy, I suppose. The only real offense Nubs has is his trusty boomerang, which homes in on enemies to a point but obviously requires you to wait for it to make its way back to you before you can toss it again. It’s enough to make you feel like you have some sort of way to strike back at enemies without allowing you to feel truly powerful.

Nubs’ Adventure allows you to play a portion of the game for free, but you’ll run into red gates that block your progress sooner or later. The rest of the game can be unlocked via the game’s sole IAP for $4.99. The controls use six virtual buttons, two of them to move left and right, and two others for jumping and interacting with the environment. There are a couple of other buttons that allow you to pause the game and open up a very helpful mini-map. The buttons are spaced out nicely and you can adjust the size of them in the options if they’re not where you need them to be. If you have an MFi controller, the game supports those, as well. There’s unfortunately no Game Center support yet, but the game does give you a running percentage of how much of it you’ve cleared when you load up your save file.

Like many games from smaller developers, Nubs’ Adventure feels like a real work of heart. That’s often code for a game that has some serious flaws to it, but I feel like Nubs’ offers an impressively complete package that is sure to appeal to anyone who enjoys open-ended platformers. I’m not certain if it was totally by design or if there was a little serendipity involved, but almost every element of the game is sitting right in the sweet spot. It’s just as long, challenging, and involved as it needs to be, with elements mixed up just right to keep its admittedly simple lock-and-key structure from wearing on you. The controls are spot-on, and the presentation manages to spin its simplicity into something soft, surreal, and dreamy. I had a fantastic time with Nubs’ Adventure, and I’d strongly suggest you at least give the free portion of the game a try.