Even though the start of this week was relatively thin on Hearthstone (Free) news, Blizzard came out mid-week and ensured we had some very interesting news to talk about today. This was a week of strong tournaments, interesting ideas for the game’s future, TV commercials, and, as always, controversy. So, let’s see what the world of Hearthstone had to offer.

The biggest news of the week was, of course, Blizzard finally giving Hearthstone players more Heroes to play with, a move I predicted a while ago when Hearthstone‘s developers said that they won’t be adding cards for ever. However, in a move that surprised me and almost everyone else, the new heroes will be purely cosmetic and won’t add any cards, Hero powers, or any other gameplay elements (although making opponents realize you aren’t F2P can force them to alter their strategy). The first Hero revealed is the King of Ironforge, Magni Bronzebeard, a bearded brute who replaces the Warrior Hero, Garrosh. Magni comes with a new Hero portrait, unique Hero power animations, new emotes, a custom visual theme for the Hero’s play area, new “entering the game" animations, and new cardbacks. All these features cost $9.99 and cannot be bought with in-game gold.

Now, first thing’s first; the new Hero looks fantastic and his animations and theme will make the already-pretty game even prettier. However, most players weren’t very happy with Blizzard’s move, some because of what they considered as a high price for the hero and others with the move all-together. When you consider that the whole Blackrock Mountain Adventure, which offered a few hours of gameplay and plenty of new cards – including Legendaries – cost $24.99, it’s not surprising that some find Magni’s price a bit over the top.

Still, it’s cosmetic and optional, so many of you will wonder why people are complaining about Blizzard’s move. Well, the problem according to many is that Hearthstone has much more urgent issues that need addressing and Blizzard should be directing its energy that way rather than spending time producing all the art and animation for a cosmetic item. Many players have been asking for more deck slots (Blizzard has been claiming that more slots will confuse new players), new Heroes who will actually have their own classes and new cards/powers, in-game tournaments, fixing the Ladder drudgery (which we talked about in last week’s column), and more. For these players, the time and money spent on the new Heroes should’ve been directed at improving the experience of playing Hearthstone. Where do you lean? Cosmetic items are an essential source of income for any developer, but should Blizzard be expanding and enhancing the game instead?

This is a video of Kripp giving his opinion about Magni.

Brian Kibler Has Some Interesting Suggestions For Hearthstone

Brian Kibler had some very interesting ideas about a number of new mechanics Hearthstone desperately needs if it’s to avoid becoming a frustrating affair. For those who don’t know who Kibler is, he’s a two-time Magic: The Gathering Pro Tour Champion and a Hall of Famer, but in addition to his CCG credentials, he’s also been working as a game designer on World of Warcraft TCG and Solforge. So, when he talks, people often listen. After writing a great article discussing the problems that Dragon decks have in Hearthstone at the moment (missing some much-needed cards like Taunts or minions that give Health), he wrote another one talking about five Hearthstone cards he’d like to see, which is another way to say various mechanics that Kibler would like to see introduced in Hearthstone.

The first card he wants to see is, unsurprising, Ruby Protector, a 6-Drop Dragon with Taunt. This card’s purpose would be to make the tribe more viable and also to keep the player alive in later turns without needing as many common cards in the deck as he does now. The next card is Flash of Light, a 3-Drop Paladin spell that restores 6 Health to your Hero and gives you a card. For Kibler, a card like this would solve Paladin’s need to play Lay of Hands to stay alive in later turns (which restricts the number of high end options for the class). So, Flash of Light would open more options for midrange and control Paladin Decks.

Encroaching Ooze is probably the card most needed in the current meta. This is a 4-drop which won’t allow minions with Charge to attack the turn they enter play. Players have to face so many minions with charge currently (Unleash the Hounds, Wolfrider, and more) without the ability to stop them, that sometimes players can only spectate their unavoidable end. Yes, you can have some Taunt minions up as defense, but they can only do so much against a Charge barrage. The next card, Landro Longshot, is a 3-drop that blocks Hero powers while it’s on the battlefield. His role is, in a way, similar to Encroaching Ooze’s because it offers a way for players to interact with a specific mechanic that they can’t do so at the moment. I’m all for this card because I’m tired of building a strong board state only to get picked apart by Steady Shot time after time. I like games that reward skill, and there’s no skill at tapping that Hero Power turn after turn. 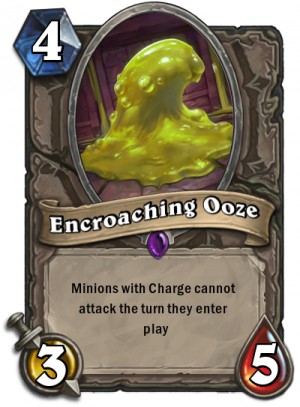 Mind Flay is a 2-Drop Spell that allows players to look into their opponent’s hand and discard a spell. Although Kibler says he knows such a mechanic won’t be finding its way into Hearthstone any time soon, he feels that the game needs a way to avoid too much predictability because as it stands now, players can sit back and string all their spells combos together without anything stopping them. I like most of these ideas, especially as a player who’s dabbled into many other CCGs. I don’t enjoy those moments where I have to sit there and watch my health deplete, unable to do anything to prevent it. We’ll see where Blizzard decides to take Hearthstone‘s mechanics in the future.

New Hearthstone Resource for the Statistically-Inclined

If you like to understand a game through the study of its statistics, I have just the website for you. PVPLIVE offers a ton of information about the top players and the game in general that will give you a better understanding of the current state of the classes, the players, and much more. So, go read plenty of numbers.

Blizzard has decided to join the TV game commercial world, like Supercell and others before it, and has broadcasted a commercial during the NBA and NHL Finals. As I wrote in a article mid-week, it’s mind-blowing to realize just how big mobile has become the last few years, and this commercial is evidence of just that explosion in popularity. It’s also interesting to note that the commercial emphasizes the mobile version of Hearthstone rather than the PC one, which, again, shows that Blizzard believes in the potential for even greater growth of the mobile version of the game. Strange worlds we live in, don’t we?

As I talked about in last week’s Touchstone Tavern, Lifecoach was crowned the Viagame House Cup #3 Champion. Now, we have some more numbers on the Tournament, most of them predictable. Gosugamers broke the tournament down in numbers for us. According to their numbers, the decks that players brought to the tournament were pretty much the ones everyone expected, as the graph below shows. You got your Oil Rogues, your Patron Warriors, your Combo Druids, Your Freeze Mages, your Zoolocks and Handlocks, and so on. 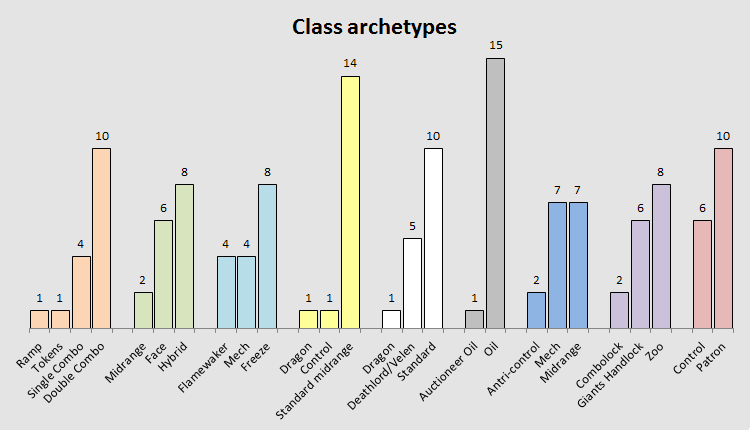 The most banned class during the draft stage was, of course, the Warrior because everyone tried to avoid playing against a Patron Warrior. If it wasn’t banned in the first phase, it was banned in the second. The Mage was also often banned because the Freeze Mage can destroy many strategies. In case you don’t remember how the Cup’s ban phases go, each player brings 9 decks, one of each class, then they ban 1 keep 2, ban 2 pick 2, ban 1 pick 1. As the Warrior went out early, players went to their other two stronger classes, Warlock and Druid.

When it comes to results, the Druid, Hunter, and Warlock performed predictable well, but keep in mind that the results in the graph below are skewed by the ban/pick system. The Shaman did well – since the class often counters control decks well. Overall, not everybody brought Patron Warrior to the tournament, Hybrid Hunter rules the Hunter builds at the moment, Druid, Warlock, and Hunter continue to do well, and, finally, Dragon decks weren’t meant to fly, yet.

This great series happened this Weekend. The winner was … Lifetap! The tournament had some great games, but also some incredible RNG. I’ll have more about the tournament in next week’s Touchstone Tavern.

The tournament we talked about last time is starting today, with 16 pros competing for a lot of money. This tournament aims to be a premiere professional Hearthstone League with no bans, deck locks, or restrictions. You can start watching the tournament every Monday to Thursday at 17:00 CST on Twitch.

Tempostorm’s excellent Meta analysis is in danger of becoming predictable as we’ve been getting pretty much the same analysis for the last few weeks. Of course, this isn’t Tempostorm’s fault but, rather, it’s an indication of how the meta is stabilizing (calcifying?) for good now that the dust of BRM has settled. I could pretty much copy-paste last week’s Meta Review and save myself the trouble of writing it again, but here it goes.

Grim Patron Warrior still rocks the top of the mountain, with Hybrid Hunter, Oil Rogue, and Zoolock following suit. From there one, you have Mid-Range Hunter and Mid-Range Druid, Tempo and Freeze Mage, and even lower you have Mech Mage, Demonlock, and Face Warrior. At the end of the May Ranked season, two hunter players took Rank 1 and Rank 2 (both Mid-Range Hunters), which demonstrates the deck’s current viability. However, Tempostorm went with Hybrid Hunter, Oil Rogue, and Patron Warrior because they have favorable matchups with most other decks. For a more extensive analysis, visit Tempostorm’s page.

Sometimes you call for a Topdeck, and the Gods of Hearthstone respond. Look at this crazy Holy Nova Topdeck

The rest of Hearthstone‘s Commercial

The moment that doomed Lifecoach in yesterdays ESL Finals when Reynad’s Unstable Portal turned the match around.

Epic plays of the week

How it feels to play against Patron Warrior…

Why some people hate Druid decks

We have some good resources on the site for you, so if you are new in the game or want to get better at playing, check them out.

That’s all for today, thanks for reading, as always. We have officially entered Summer season, but Hearthstone news won’t be slowing down, especially with all the tournaments coming our way and (maybe?) a new expansion on the way. Till next week, enjoy losing to Patron Warrior.