This week’s Final Fantasy: Record Keeper (Free) event lets players earn the world’s best thie…ahem Treasure Hunter from Final Fantasy VI fame. There are a lot of memorable characters in FFVI, but Locke always had a soft spot in my book, especially once you got to play his side story in the World of Ruin. This week’s event, appropriately titled Legendary Plunder is a Challenge Event takes you on a highly summarized jaunt through the first 3/4th of FF VI and eventually concludes with that faithful scene. For folks looking for a little help along the way, read on.

The one thing I noticed about the Legendary Plunder event is just how long it really is. There are fifteen separate areas, each with approximately 3-4 battles (with each battle having 3-4 rounds). I wasn’t joking that the event takes you through a lot of FF VI as the first event starts out in the ‘Abandoned Mineshaft’ which starts Final Fantasy VI and ends with the Phoenix Cave which is an area in the World of Ruin. Between then, there are all the major World of Balance events complete with bosses. I have 78 total stamina and it took me about 3 full charges in order to play through the whole thing. On top of it, there’s an Elite equivalent for each one that take even more stamina. 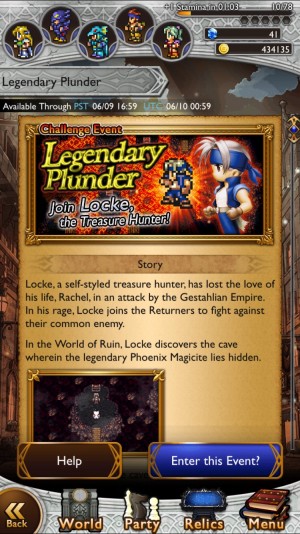 Legendary Plunder may be long, but as the name entails there is a lot of good loot to earn throughout the event. Obviously Locke is the main reward at the end of the Classic Dungeons, but you’ll also earn plenty of Growth Eggs, Mythril and Orbs (including Summon Orbs). Of course, the real loot comes in the Elite equivalent, where all the orbs are a minimum 3 stars and get better as you progress. Towards the end of the Elite Dungeon you’ll earn a few Major Orbs, which are important to add to your collection, as well as a few cool accessories that we’ve seen in other places (Hyper Wrist, Hero’s Ring, Fire Ring). The best reward is reserved for the last area, which offers a First Time Reward of the Phoenix summon, which revives an ally while causing fire damage.

In terms of difficulty, Legendary Plunder is incredibly easy on Classic. In fact, I’m pretty sure you could complete the whole thing with a party of 25-30 leveled characters, assuming you have some 4 and 5 star weapons and armor (synergy bonuses wouldn’t hurt as well). Elite is a different sotry, where I’d recommend 45-50s, complete 4/5 star weapons (preferably 5 star), and any synergy bonuses you can muster both in terms of weapons/armor/accessory and characters. If you’ve been following our guides, you should have three FF6 characters available to use: Celes, Terra, and Cyan. If they’re appropriately leveled, I’d suggest bringing them along.

There are way too many boss battles to go into detail here, but I’d like to at least give you a glimpse of the spells and abilities you should be bringing at to satisfy the criteria necessary to earn gold on each. Obviously, having the right spells will also help in beating the bosses themselves, so I’d suggesting heeding my suggestions at a minimum in creating the perfect teams for each boss. In order to achieve some brevity, I won’t bother to mention the bosses that have simple objectives, such as killing them without KOs or prior to them using their signature abilities.

Figaro Castle – Magitek Armor – Make sure you have some lightning spells equipped.

Mt. Kolts – Vargas – When Ipooh comes out, make use Fire on him to satisfy the objective.

South Figaro Cave – Tunnel Armor – He’s weak to both Thunder and Water attacks, so use both in the battle for the objectives.

Zozo – Dadaluma – Poison attacks are his weakness and the satisfy the objective.

Magitek Factory – Ifrit & Shiva – If you recall from the game. Each one will do one attack and then shift to the other. Ifrit is weak to Ice and Shiva is weak to Fire. The key is to time it so your attack hits the right target. Both weaknesses are objectives so try and hit both in one battle. 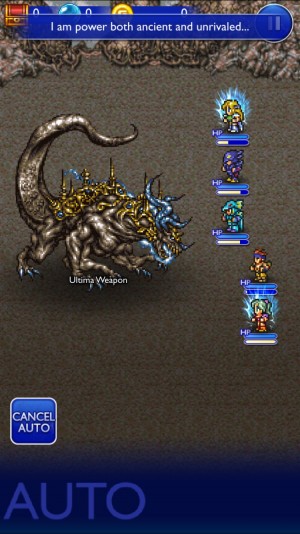 Vector – Crane – There are two cranes. Crane (Left) is weak to Water and Crane (Right) is weak to Lightning. Both weaknesses are also objectives so hit them both in one battle.

Thamasa – Flame Eater – As you might imagine, Flame Eater is weak to Ice attacks, so those are the key to this extra objective.

Esper Caves – Orthros – This time he has two weaknesses: Fire and Lightning. Both are on the objective list as well so make sure you hit him with both.

Airship – Orthros & Tyhpon – There are two objectives: hit Orthros with Fire and Typhon with Ice to achieve both.

Phoenix Cave – Red Dragon – There are three objectives. The first is to exploit his Ice weakness. The second is to win without being KO’d while the third is to win with Locke while making sure he isn’t KO’d. Obviously that last one requires you to earn him first, level him up, then return and play this mission with him. However, satisfying that criteria isn’t required for gold assuming you’ve perfected the other rounds.

Obviously, playing this on Elite will require a bit more strategy, but if you use the above reference as a starter, you should be well on your way to succeeding and earning the Phoenix summon.

Locke At a Glance

So now that you’ve unlocked the World’s Famous Treasure Hunter, what exactly is he useful for? His weapon choices are limited to Daggers, Swords and Thrown weapons, which is an okay variety in terms of weapon selection. Meanwhile, he’s limited to Light Armor, Robes, Bracers, Helms and Hats from the armor side. From an ability standpoint he can use Combat Skills (Rarity 4), Support (Rarity 3), Celerity (Rarity 5, which is great), and Thief (Rarity 5 but discussed further below). The high Celerity ability is great as it allows him to eventually learn Quick Hit, which can be a useful ability depending on the circumstances.

Unfortunately, at this point there a lot of Locke’s potential is still yet to be tapped. True, he has the highest speed rating out of every character currently available, but the rest of his physical attributes are are low to mid tier at best. His usefulness derives from his secondary Soul Break (which requires you to win the Rising Star) which slows and damages all enemies as well as his thief skills. Unfortunately, no such skills are currently available in the English version so we have to watch and wait on those. I have high hopes, however, that those skills will make him worth having on your team in some form or fashion.

Legendary Plunder is only available for a week (it ends on June 9th), so I highly suggest players save up their stamina and get to completing the normal run through at the very least to earn Locke. Meanwhile, stick with us as we report on future events in Final Fantasy: Record Keeper.