Hyperburner was the kind of game that I was immediately taken by thanks to its promise of gorgeous worlds and quick-reaction gameplay. Developer Badpotion was gracious enough to send me a pre-release build to try out of Hyperburner, and while I think there’s still some work that needs to go into this one, there’s definitely a lot of promise for this game as it gets closer to completion. Check out some hands-on footage, including a first glimpse at some of the game’s later worlds as they’re being developed, below:

Hyperburner promises to be extremely challenging as its levels get faster and longer. You’re flying through small gaps, that often get smaller. Early levels have geometric shapes and clear spots to fly through, but later ones have you making quick moves through pipe spaces, or flying between rocks. It really nails the feeling of being in control of an escaping spaceship in a sci-fi movie.

After getting to play it for myself, I must say: Hyperburner looks absolutely gorgeous. Its color scheme helps give the game its distinct look, with limited colors, the occasional vibrant bursts of bloom lighting, and its techno-mechanical themes. You have levels that take place in artificial digital environments, and ones that incorporate machinery into natural formations. The six worlds’ themes are still being worked on, and I’m curious to see what they all look like when the game is done. If you watched the video, you saw just how fantastic this game looks like in motion. 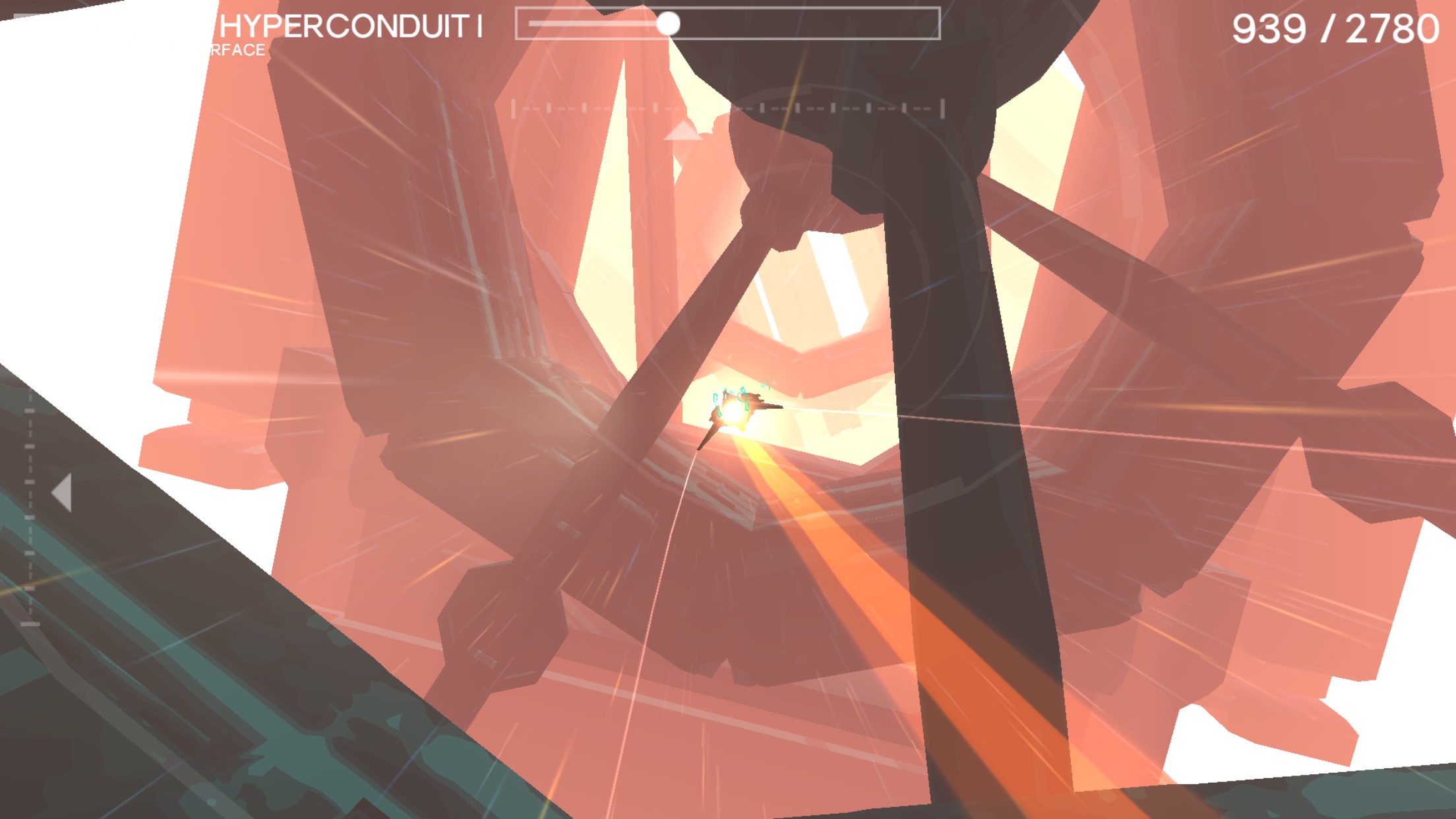 Structurally, Hyperburner will try to balance out both level-based gameplay with endless play. You play a level to its distance completion point, which then unlocks the net level. in the current build of the game, this also unlocks the next world, but this is also subject to change. But once you complete a level, you can play it in its endless ariant at three different speeds, allowing you to go for high scores on each level. It’s actally a pretty neat trick to extend the life of the game while still providing solid progression.

Controls-wise, the game doesn’t use a virtual stick, but a touch-and-drag system that moves the on-screen indicator as to where you’re flying. I’ve played a couple builds of this game, and the system feels better than ever in this latest one. It does kind of wind up feeling like you’re just aiming the indicator to empty spaces in some levels, but later ones show that you do have to account for your ship’s physical presence. Yanking around the ship’s mass takes some practice getting used to, as you may have the indicator clear, but the ship won’t be. This is something that can likely be addressed before the game’s final release. 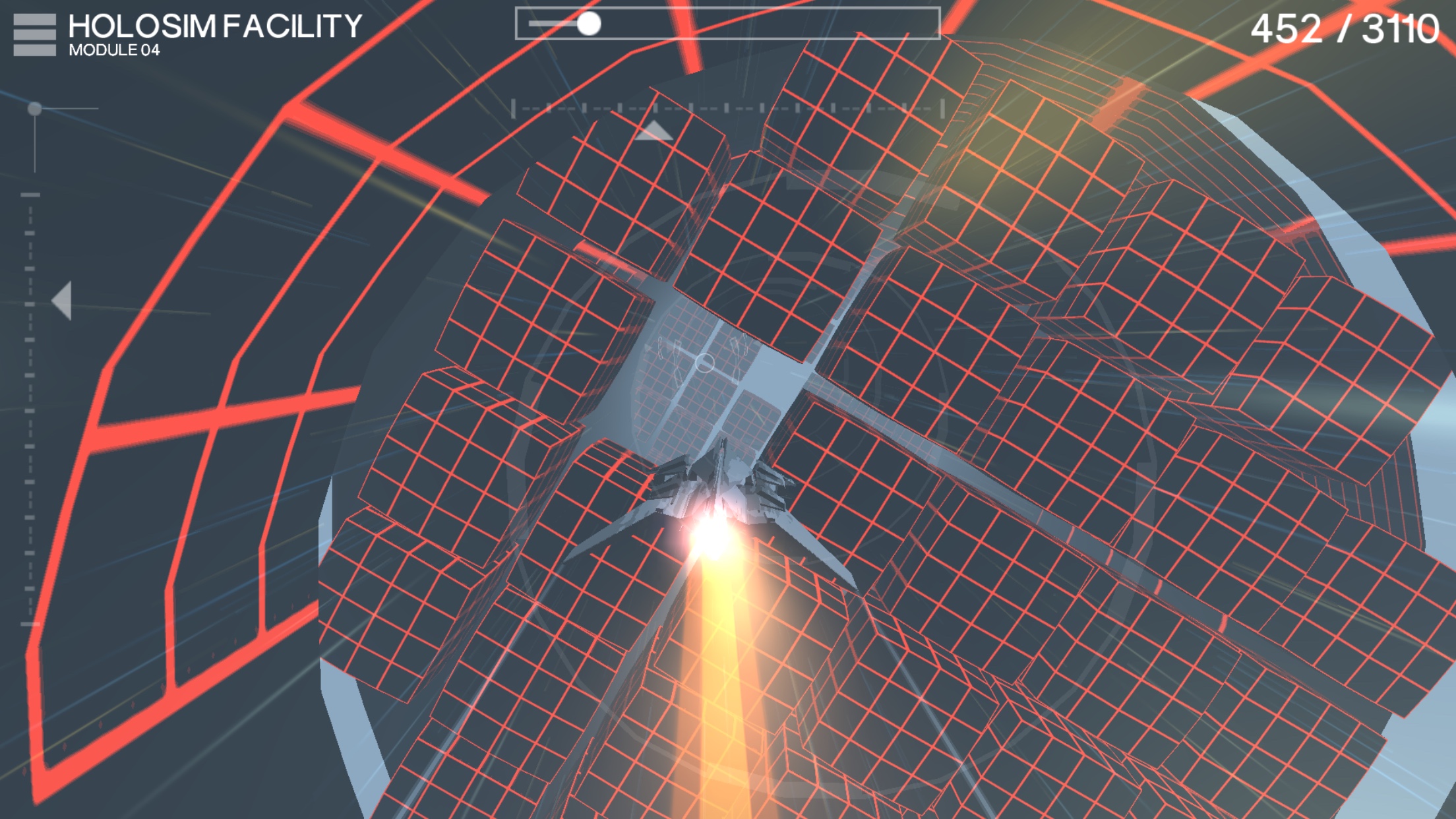 I appreciate that the game supports both portrait and landscape modes, particularly since it’s a game that is played one-handed. It’s something that developers need to do more often when possible. There’s a lot of games that I just want to play quickly on my phone between checking Twitter, or while on the bus, and it’s a bit cramped to play in landscape. They don’t have to be perfect – Crossy Road (Free) is orientation-independent, but you get a wider view in landscape. As long as it’s playable in portrait, it’ll do. And Hyperburner works perfectly well in both portrait and landscape.

Hyperburner is still in the midst of its development, but I’m looking forward to what the final version is going to be like, with all the touches that will hopefully make this game live up to its ultimate potential.