Vainglory (Free), the superb mobile MOBA, has just been updated, and it has introduced a new hero and made the App Universal. The Fortress Update, as the developers are calling it, added a new hero called, surprisingly, Fortress. Fortress will be unlockable only with ICE for the first 7 days, and then you’ll be able to unlock him with ICE or Glory. This hero has some fun abilities, like Packmates, his passive perk that enables him to move faster when he’s near an ally and promotes a pack mentality. His first active ability, Truth of the Tooth, allows Fortress to mark an enemy as prey, which makes his next attack a short-range lunge and also gives him and allied heroes increased move speed when moving toward anything marked as prey. His second ability, Law of the Claw, deals crystal damage on his enemies and forces them to bleed (take damage) for a few seconds after that. Attacks against bleeding targets have lifesteal and increase the bleeding. Finally, Fortress’ Ultimate, Attack of the Pack, gives him increased health and attack speed and calls to him a pack of wolves, each of whom seek out a different enemy hero and make him or her bleed. So, as it’s obvious, Fortress promotes a strength-in-numbers tactic that demands closer cooperation among teammates for full effect. 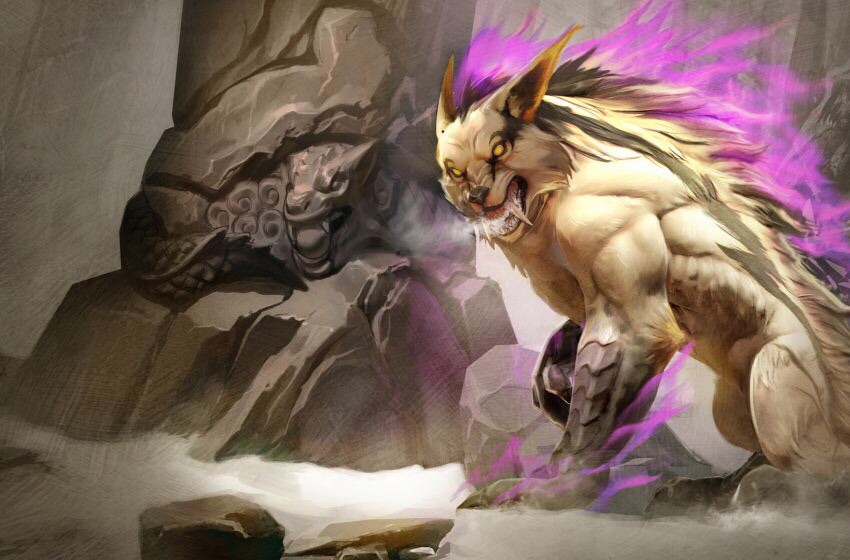 The update also added new skins and cards, a new game mode that allows players to fight against stupid bots (they are the first step to much better bots but will still allow players to test various builds), and added XP leveling to your account (which will be better utilized in future updates). In what are more important changes in terms of gameplay, the developers have tried to tone down jungle dominance because it was really making the game all about the jungle. So, they’ve shifted the gold from the easy-to-steal camps near the jungle shop to the inner camps near each base. This way, if players want to get the good stuff, they need to risk and push further into enemy territory. The update also brings Minion Mine changes, which were pretty much ignored until late game. The developers have increased minion damage versus turrets, allowing minions to destroy turrets by themselves in late game. 1.5 also toned down Vox, Skaarf, whose early game was pretty much a game-breaker for many recently, and also tampered with Saw, Koshka, Celeste, and Joule.

All in all, 1.5 is a pretty big update that will shake up the current meta and change many players’ tactics because of the changes in the jungle. I like that the developers are really trying to give players different ways to play the game by introducing heroes like Fortress, and that they aren’t afraid to nerf, adjust, and fix anything that’s pushing the game away from their vision. If you want to read the update notes in detail, go here.