I’m a big fan of this week’s Final Fantasy: Record Keeper (Free) limited time event. For one, the major reward is unlocking the record for Vanille, a character that I enjoyed when I played through Final Fantasy XIII. More importantly, the event takes place in FFXIII which means I get to listen to the game’s awesome battle theme some more. For fans of DeNA’s RPG looking for some tips to get through this week’s The Fal’Cie of Pulse event, we got you covered below.

Survival of the Fittest

Similar to Celes event that took place earlier this month, The Fal’Cie of Pulse is a Survival Event. If you’re looking for a more detailed summary as to what that entails, I’d suggest checking out that guide. Otherwise, just know that there are a few differences in this event worth mentioning. 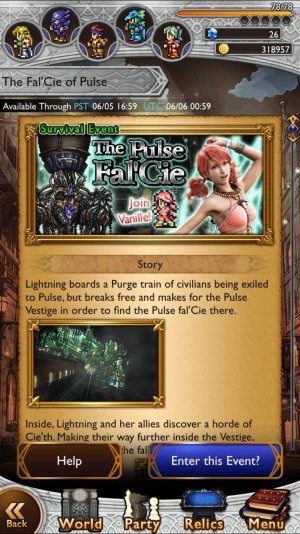 First, this Survival event actually has four difficulties (unlike the last event which only had three). Easy and Normal are pretty easy to get through if you have a decently equipped team that is at least Level 30. Hard is obviously a bit tougher but is manageable with a team in the high 30s low 40s and a few 5 star weapons (as well as a decent selection of abilities). Heroic requires a lot of upgraded abilities as well as a high 40s team and a decent amount of 5 star weapons and armor. As always, I’d suggest playing through Easy and Normal if only to get the Mastery and First time rewards and focus on Hard if you can manage it. Only the high end parties should attempt heroic.

The second interesting thing I noticed is The Fal’Cie of Pulse survival rewards actually include some high end abilities that can eventually be unlocked. Players can earn Thundaga, which is great 3 star black magic spell. The ultimate reward, however, is Thundaja, which is the four star version of Thundaga. Thundaja makes its debut with this event and requires a decent amount of Greater Black Orbs and Greater Lightning Orbs to craft. Thus, being able to earn it in the event without needing those orbs is a big deal, even if you’ll have to play for a long time to unlock it.

Other awesome rewards include a Durable Power Wristband (which also makes its debut) as well as the usual selection of Greater Orbs of various types. Meanwhile, Vanille’s unlock only requires a 1000 Memory Prisms, which should be easily obtainable with a few runs on normal difficulty. While I obviously suggest playing enough to unlock her, I’d suggest going further to get as many rewards as possible.

As is the case with Survival Events, there isn’t much of a variety in terms of actual enemies. However, there are a few bosses here that can prove to be tough on the later difficulties. Let’s take a look at each one:

PSICOM Marauder is the easiest boss that is typically found earlier on in a run. He has no vulnerabilities but no resistances as well. His damage is focused on either physical attacks are thunder-based magic attacks that can do damage to one or all parties. Pelt him as fast as you can with your damage abilities and you’ll have no problem at all with him. 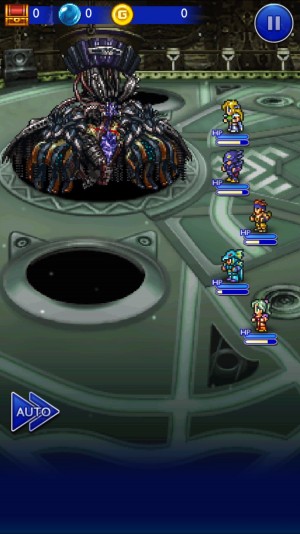 Manasvin Warmech and Beta Behemoth are the standard bosses. Both aren’t too tough, but they a lot of HP in Hard and Heroic. Just keep in mind that both are vulnerable to Lightning and Water. In addition, make sure you have healing spells on hand in case Warmech gets out of control with his Wave Cannon (proportional heavy damage to one ally). The same goes for Beta Behemoth and his Rake (party-wide damage) and Heave (heavy damage to one ally) abilities.

The final boss is Anima, which can be a very tough boss in certain situations. He’s comprised of three parts, Anima itself and its Left/Right manipulators. All of them do physical damage and Anima counters every attack directed at it. The counter is random as well, so you never know where that damage is going to go. The manipulators can be destroyed, but Anima will eventually revive both of them. Also, once Anima gets below a certain HP, both manipulators start casting Resonant Magic, which does party-wide damage and can do some significant harm very quickly. The best way to deal with Anima is take out one manipulator (Anima won’t revive it unless both are taken out) and then Magic Break the second one. Then, just start pounding on Anima itself while healing as needed. Follow that strategy and you shouldn’t have too much trouble with it.

Vanille at a Glance

Out of all the characters currently released in the US version of Record Keeper, Vanille is probably the closest players have to a high end Red Mage in terms of skills. Both her Magic and Mind stats cap out relatively high at level 50 although neither reach the heights of, say, a Rydia or Aerith. She also has access to 4 star Black Mage and 5 star White Magic, meaning she can be used in the eventual end-game once those abilities are able to be acquired. She also has some minor support ability (up to 2 stars), but I wouldn’t waste ability spots on those. Both her default Soul Break as well as the one that can be earned with her Binding Rod weapon are also excellent tools. Deshell does magic damage to all enemies while lowering their magic resistance while Deprotega does magic damage to all enemies while lowering their physical defense (very useful).

Her downsides come from the fact that she’s a bit squishy. Since the highest armor she can equip is light armor she won’t be doing any end-game tanking and the lack of any good physical weapons means she wont be doing much in the damage department either. However, in terms of a solid magic user that can use either type of magic, you can’t do much better at this point.

Record Keeper’s The Fal’Cie of Pulse event is available through June 5th so players interested should certainly get to checking it out. Meanwhile, we’ll be here as always to report on the next character event that comes up.