Like every genre, turn-based strategy RPGs have a certain common grammar to them. Most decent ones will bring their own ideas to the table, but the core gameplay rarely ventures outside of the well-established rules of the genre. Likely owing to its roots in chess and similar strategy board games, there’s a certain rigidness inherent to this particular sub-genre that you might not see in others. While many games try to push against that by trying to offer the player a more free-form experience, balance is generally considered paramount. The more freedom a game gives the player, the harder it’s going to be to maintain that balance. The end result is that once you’ve learned a good set of strategies for one game, that training will often serve you well in many others. It’s not necessarily a bad thing, since most of these games are trying to simulate wars. It’s not exactly reasonable to expect a commander to eschew time-honored strategies in favor of sending a pegasus-mounted zombie to chuck home-made bombs at a castle.

The Last Warlock ($3.99) is not interested in your idea of reasonable. It gives the player an absurd amount of freedom as to how they want to reach their goals. You can carefully approach the front door and draw out the enemy one at a time, using choke points to gang up on them and diminish your opponent’s resources so that you can overwhelm them, sure. Or you use the stuff you find lying around to make a grenade, hop on your elephant, swim around to the side, and blow open your own entrance while another unit runs distraction on the front door. The game offers you the tools to come up with your own strategy, and the odds are pretty good your ideas are going to be at least a little different from anyone else’s. Is it balanced? Well, probably not, but it doesn’t matter too much because it’s terribly fun. 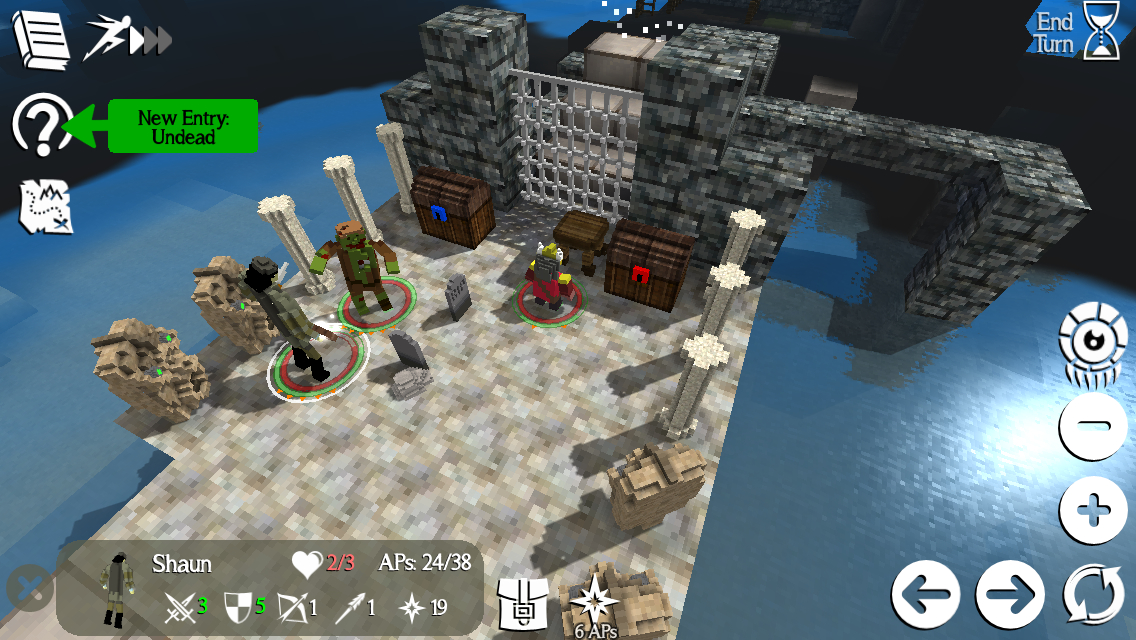 There are a few components that factor into this freedom. The most immediate element is the size of the maps, which feature lots of side areas and often require you to do a bit of traversal between fights. You can make a straight line to your goal, but the game isn’t going to force that on you, and it gives you plenty of space to do otherwise. You’ll even be rewarded for going off the beaten path, with extra treasures and materials waiting to be discovered. Those materials can be crafted into all manner of useful items, including equipment, bombs, or other goodies. More valuable are the gems, which you can use to buy new spells or improve your warlock’s stats after each mission. There are a fixed number of gems to be found in each mission, with replays only offering you the ability to hunt down any you missed the last time through. You’ll want to fill out the massive list of spells in the game, because doing so gives you a ton of options for how you want to go about winning each mission.

The last piece of the puzzle is how alive the environments are. You can destroy walls, smash things to find materials, set fires to create largely uncontrollable natural barriers, create trenches to give yourself the high ground, and more. Wild animals wander around minding their own business, but you can give them a solid thwack upside the head to earn some health-replenishing food and materials for crafting. Every scenario is a bit different, of course. The second main mission starts you in a jail and tasks you with escaping, so you’ll need to change your tactics some, but there are always a ton of ways to use the environment to your advantage. Naturally, the enemies will do the same, up to and including crafting their own goodies from the precious materials the level offers up. Part of the strategy as you go along is in claiming ground as quickly as possible so that the enemy doesn’t have the time to bulk up. You’ll have to decide if that’s worth rushing past any secrets that might be found along the way. 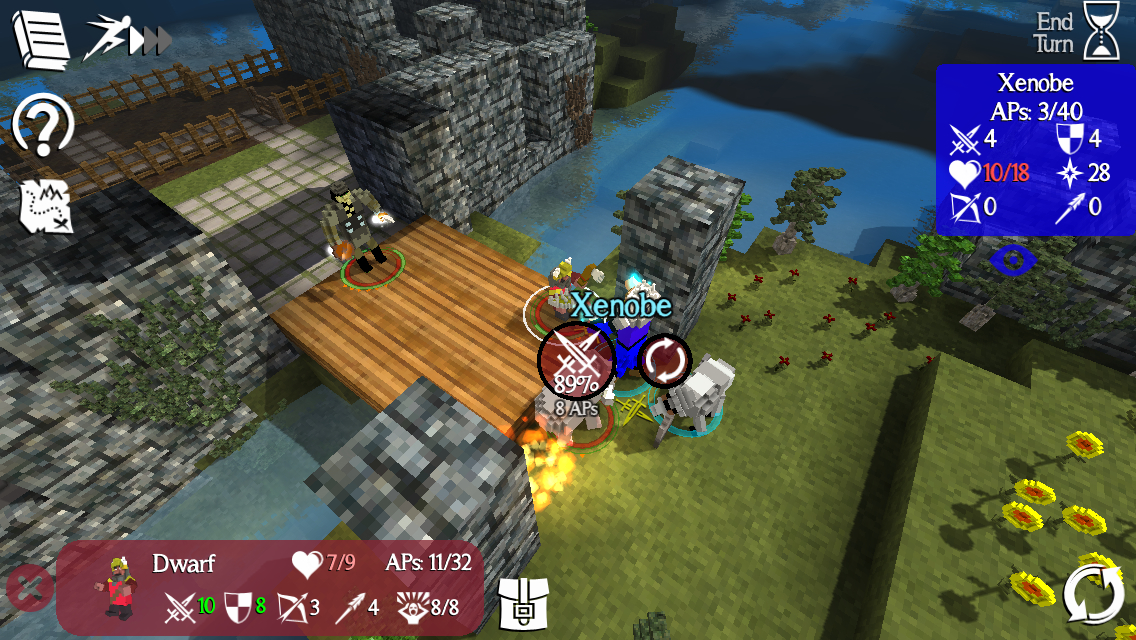 Your goal in each level is to find the portal out and take it before it disappears. Usually that portal will appear as a result of you killing the big bad of the level. To help you with that job, you’re able to summon a variety of warriors and creatures, so long as your mana holds out. You can also cast some direct spells like fireballs or healing magic, and even pull off some fun things like taking control of an enemy and making them dance for your squad, so to speak. Each summoned or controlled creature acts as another unit under your control, with their own inventories, stats, and skills. How much each unit can do on a turn is governed by their AP, consumed by just about any action you perform from moving to crafting. Once all of your units have exhausted their AP, you end your turn and the opponent gets to move their pieces. In this respect, The Last Warlock is fairly orthodox.

While the number of single player maps is fairly small, numbering less than ten, each one takes at least a half hour to finish and often a fair bit longer than that. You’ll probably need to replay them to get all of the gems, and if you’re keen on challenging your scores, that’s another good reason to go back, too. The game also offers a couple of multiplayer solutions. You can play a hot-seat game locally, or play the game’s asynchronous battle mode online through Game Center. Up to four players can join, and the battles are carried out in one of three special arenas. To keep things fair, you won’t be using your warlock that you’ve built up in the single-player mode here. Instead, each warlock is assigned a random assortment of spells that hopefully balance out to something useful. You can also play the hotseat mode against CPU warlocks if you don’t have anyone around that wants to play with you, serving as a little bit of extra fun for those who have cleared the main maps. 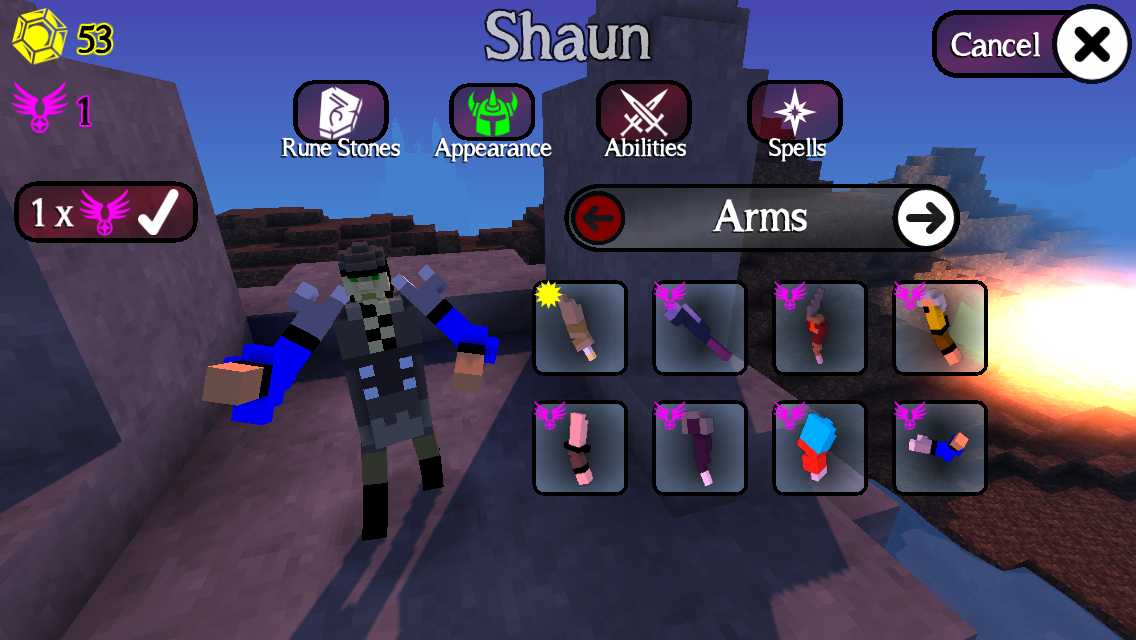 The game’s visuals go for a blocky look not unlike Minecraft, but with smaller blocks. While it’s not the most original style, it serves the gameplay well, offering 3D destructible environments without putting an unbearable burden on the developer. You have full control over the camera, but if you don’t want to fool around with it, you can usually leave it fixed without running into too many problems. Just make sure to keep your eye open for multi-leveled structures if you do that. I had trouble locating a target I had to hit to open a door in the first mission, and after running around in circles a bit, I realized I just had to pull the map back. Well, even the best of us can look silly at times, and I’m hardly the best. Everything else is as simple as you would expect from a strategy game. The ability to zoom the camera means you never find yourself fumbling to hit a tiny spot on the map, and the rest is just point and tap. The interface is easy to understand, and even the crafting allows you to simply cycle through your possible choices given your materials on hand.

Again, I’m not sure how balanced The Last Warlock is, and that might be a point of concern for some strategy veterans. I will say that the game is a blast to play thanks to its willingness to allow the player to be creative, and while its campaign is somewhat short, it puts up a solid challenge that offers plenty of opportunities to play levels again in new ways. It has lots of fun stuff to unlock, but no amount of grinding will allow you to unlock it all, so you have to really learn the game if you want to get everything. The multiplayer is definitely fun, though its asynchronous nature means you’re going to have to be patient and the smaller levels cut down a bit on potential shenanigans. The Last Warlock is a fantastic bit of medicine for anyone who has grown a little weary of the norm in this genre, and a breath of fresh air even if you haven’t. My gut tells me this game is slipping under the radar, but if you’ve got any love for strategy RPGs, you shouldn’t let this one pass you by.