I, Nathan Reinauer, have a problem. Buried somewhere deep in my soul, I think I may have known it all along. I’ve tried to blame others, but I’m starting to believe it is, in fact, my fault. Yes, it’s time I face the music and finally admit it to the world: I’m bad at tower defense games.

Whew! It feels good to get that out in the open. I’ve played ‘em all: your Sentinels ($0.99), your Kingdom Rush’s (Free), your Anomaly’s ($1.99). In fact, Fieldrunners ($2.99) was one of the first iPhone games I ever bought. (And don’t even get me started on the sequel. I booted it up and it promptly spat in my face.) I’d enjoy them for a time, and then throw my phone down in frustration. Why is this game so damn hard? 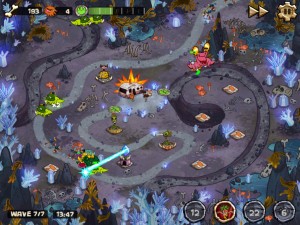 That’s not to say I don’t like playing them, though. Au contraire–tower defense is one of my favorite genres, despite my immense suckitude. Which is why I jumped at the chance to review Bad Dinos ($2.99), the latest game from Insomniac (an incredibly fitting studio name, by the way. Didn’t they just release a game last week as well?). And, surprise, surprise: I’m terrible at it. Like the other games I mentioned, though, it’s pretty good in its own little way. Thankfully, it has one or two clever tricks up its sleeve, too.

As you could probably gather from the title, the game takes place in prehistoric times. Somewhere between 10,000 years ago and 200 million years ago, judging by the apparent coexistence of dinosaurs and cavemen. Visually the game is kinda like Ren & Stimpy meets The Flintstones, complete with fun little cartoon cutscenes between levels. 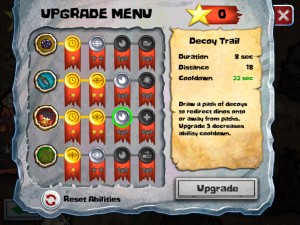 Gameplay-wise, it’s very similar to Kingdom Rush. Each map has specific points where you can place towers, which come in the usual variety of fast/splash damage/slowing/etc. You can then upgrade those towers as you play, with each one having it’s own unique upgrade tree. The titular bad dinos file in from various points on the edges of the map, and you have to destroy them before they descend on the modern stoneage family you’re trying to protect. Pretty standard stuff.

Of course, you can’t just slap a new theme on Kingdom Rush and expect to rake in millions. You need a gimmick, and Bad Dinos has a pretty great one. Under each enemy dinosaur is a green health bar, and when you get a dino’s health down to the red you can capture it with a net. Then, when things start to get overwhelming, you can release all your prehistoric prisoners, who then dutifully march upstream and eat their former brothers and sisters without a shred of remorse. Just as you’d expect, it feels really cool commanding your own little dino army. Kinda like Chris Pratt and his sweet raptor posse in Jurassic World. 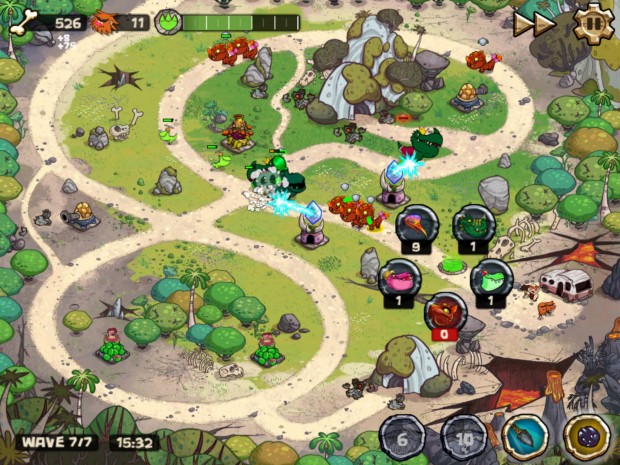 As helpful as the capture-and-release mechanic is, though, the game is still pretty difficult (though I admit it doesn’t mean much coming from me, as we’ve already established). Often the levels seem to require a very specific strategy to win, and it’s pretty satisfying when you’ve finally figured it out. If you’ve done well enough to earn three stars on a level, you can spend them to upgrade your special abilities (like shortening the cool-down timer on your capture net) which adds a nice layer of incentive for playing smart.

Faithful readers, some of you may raise an eyebrow that I chose to review a game I knew I’d be kind of awful at. But I look at it like someone reviewing a new fitness center in town: you don’t need to be Mr. Universe to know if it’s a nice gym or not. You just need to enjoy working out. And I definitely enjoy working out my brain with games like this, planning my defenses and trying different combinations over and over until I get it right. I feel I can safely say that Bad Dinos isn’t re-inventing any (stone) wheels, but the One New Thing it does is pretty great. If you’re a fan of the genre, this should provide a nice challenge. For the average joe, however, there are just too many other similar games on the App Store to say for sure whether you’ll click with this particular brand of tower-based defending over any other.