Imagine you’re in a room by yourself. Every so often someone comes by and slips a piece of paper under the door with Chinese characters on it. You don’t know Chinese yourself, but you do have a book that can help. You simply look up the characters in the book and it’ll tell you what should be said back based on the rules of Chinese language and conversation. You don’t actually understand any of what you’re writing, but the person on the other side of the door is convinced they’re conversing with someone who is fluent. This is John Searle’s “Chinese Room" thought experiment, and I was reminded of that while playing Sleep Furiously ($2.99) by Playmation Studios. 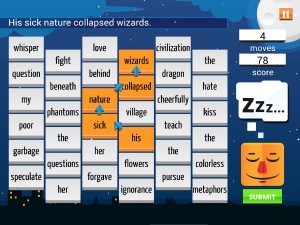 It’s really more of a Chinese Room Gone Wrong, however, and that’s part of the appeal of the game. You’re given a bunch of random words on a board and your job is to connect them into sentences. The thing is, they don’t need to make sense at all. They just need to be grammatically correct. Essentially, the app knows the “rules” of the English language, but has no idea what any of it means (much like the lonely man in the room with his book of Chinese symbols). This leads to sentences that are completely absurd, despite being technically correct as far as the game is aware. For example, “The fuzzy detectives abduct my dead ghost.”

Another thing I was reminded of while playing the game was Prose With Bros. Anyone remember that game? Unfortunately it’s no longer on the App Store, but it was one of my absolute favorites. You and an opponent were given the same set of words and had to each construct sentences, which were then judged by other people to decide who had the most creative (or dirtiest) one. Sleep Furiously is a lot like that, but you’re not being judged against anyone else. It’s a really clever idea (like Prose was) and I find myself constantly saving screenshots of my favorite nonsensical sentences. 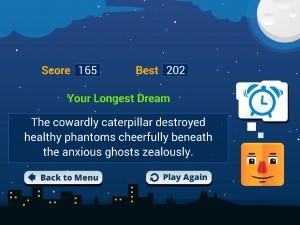 As great as the concept is, however, the game itself isn’t perfect. The way you create sentences is by tapping or sliding your finger over adjacent words, but it’s kind of hit-and-miss. Words seem to deselect themselves randomly, and forming sentences can be kind of a chore at times. Beyond that, everything is extremely bare-bones. There’s no indication of how the scoring works, no options beyond an audio toggle, and–worst of all–no leaderboards of any kind. I would have also liked an easier way to view and save (or even share) your favorite sentences. As it is now, you get to see the longest one at the end of a game and that’s it.

There are two main modes: Moves, which lets you create five of the longest sentences you can, and Timed, which asks you to get the highest score possible in one minute. There’s also an Endless Mode included, which is amusingly literal: you just keep making sentences forever. There’s no way to start over, and your score just keeps going up and up indefinitely. 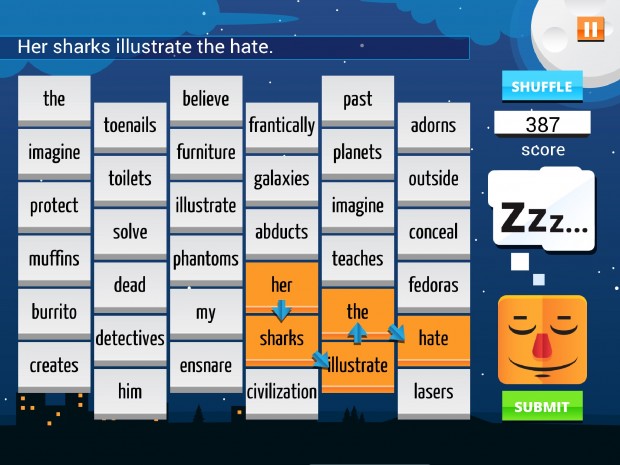 So yeah, there are some problems with Sleep Furiously. But the concept is so good it’s easy to recommend anyway. After a few more updates I could easily see it being a must-have, especially for people who miss the absurd hilarity of Prose With Bros. I’m hopeful that the controls will be smoothed out and that leaderboards will be added at the very least. Even if that never happens, though, three bucks is not that much. And when it comes down to it, you really can’t put a price tag on something like “Her ugly fedora fights the darkness".