I wish I could love Oddwings Escape (Free) by Small Giant Games. Don’t get me wrong–I definitely like it. But in order to love something, I need to feel a drive deep in my soul to go back to it over and over, because That Thing is super enjoyable and puts a warm glow in my otherwise darkened husk of a heart. Like pizza and cats. Oddwings is more like… fireworks. I like fireworks. They’re pretty and fine and I’ve been known to enjoy a firework or two when the time is right. But I’m not the sort of person who seeks them out. Maybe you are, though, and that’s fine. And this game is fine. Let’s talk about it.

In Oddwings Escape you play as a bird flying through a variety of rather beautiful environments, each time seeing how far you can go. Of course, at first you won’t go very far, but there’s good news: upgrades! Yes, this is one of those games where you go from left to right until you can’t, at which point you upgrade all your junk and (hopefully) go a little farther. 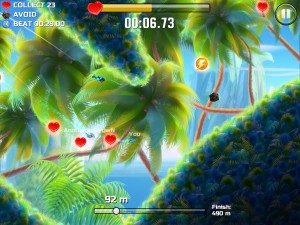 At first the system works great. You’re able to double your earnings watching a video ad after each run (er, fly) and almost always seem to have enough to fill one of your attribute bars just a hair more. Using the default bird and watching video ads I was able to get pretty far in the first environment, which unlocked all 17 challenges for that island (you unlock new challenges based on how far you fly). By the time I got my second bird and started swoopin’ around the next island, my progress started slowing pretty dramatically. The upgrade prices were higher, but the main issue was that they don’t seem to make as big a difference the further you get into the game. Whether I upgrade the speed, energy, or turning, the bird seems to function almost exactly the same next time. I get that it’s incremental, but it starts to seem reeeeal incremental.

None of that would be a huge problem if you could play over and over to your heart’s content. But you can’t, of course. You can play five games before you’re locked out by the energy timer, at which point you must wait 30 minutes for another go or pay up. It’s actually not too bad at first, since the energy gets refilled each time you level up (which happens pretty quickly when you first start playing). Pretty soon you’ll be doing a heck of a lot more waiting than flying, though. To their credit, the developers have been really active in our forums and promised an IAP to permanently increase the amount of runs you can do before your energy depletes, which is always a good thing. 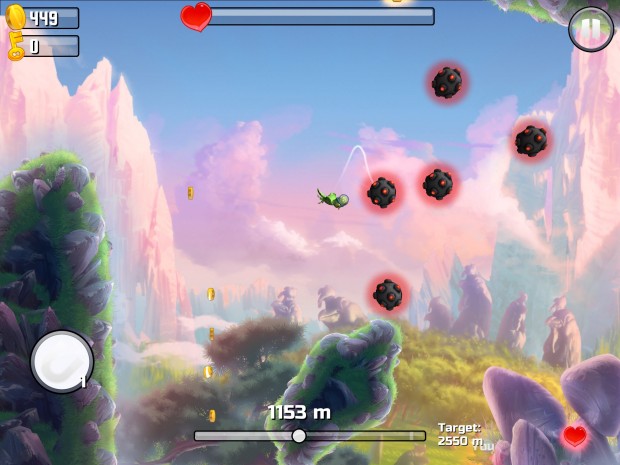 Visually the game is top-notch. The scenery looks a lot like the iOS Rayman Run ($2.99) games, though not quite as weird. What are weird, however, are the characters. Each bird looks like something out of Frankenstein’s laboratory, which provides an interesting contrast to the relatively bright and cheery environments. It really shouldn’t work, but it does, and it’s easily one of the highlights of the game. 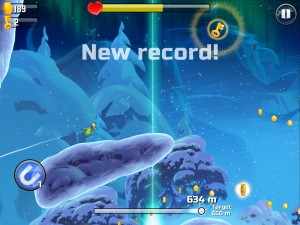 As for the controls, they work really well until they don’t. You simply place a thumb on your most favorite side of the screen and drag in the direction you want your weird little avian freak to go, with a helpful arrow pointing the way. It feels pretty great, and is one of the main things that kept me playing in the early going. Unfortunately, the deeper into the challenges you get the more frustration starts to set in. The birds generally don’t handle sharp turns or loops very well, and the later stages require a lot of that. This is alleviated slightly by the game allowing you to retry failed challenges a few times for free, but it still kinda hurts the experience.

One thing Oddwings really does nail is the social stuff. Every time you play you’ll see the ghosts of your Game Center friends, which is actually pretty helpful in finding the best path through the levels. There’s also a race mode that pits you against 9 strangers to win trophies. It’s really cool how it all comes together, to the point where I kinda wish the racing was the main game and everything else was secondary instead of vice versa. 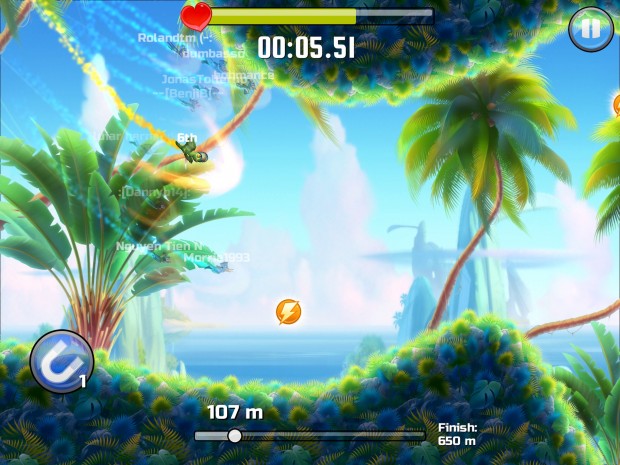 As another group of oddballs recently said, “Something good? Something bad? A bit of both?" That’s more or less how I feel about Oddwings Escape. It does several things incredibly well, but unfortunately it chokes a bit on some of the free-to-play stuff. The energy system runs out a little too quickly and takes a little too long to recharge, and the upgrades–despite being priced reasonably well if you’re willing to watch some ads here and there–take a bit too long to make a difference. But for the most part the game looks and feels awesome while you’re playing it, and I suppose that’s the main thing that should matter. And you know what? That’s just fine.