Heroes and Castles 2 ($1.99) runs into the problem that trying to bring big-scope, console-style games to mobile often have: these games are often well-made and can be fun to play. But sometimes, they’re terrible fits for the actual platform. And that’s where my issues with Heroes and Castles 2 lie: the game’s good, I just came to dread playing it because it isn’t a good fit for the mobile platform. 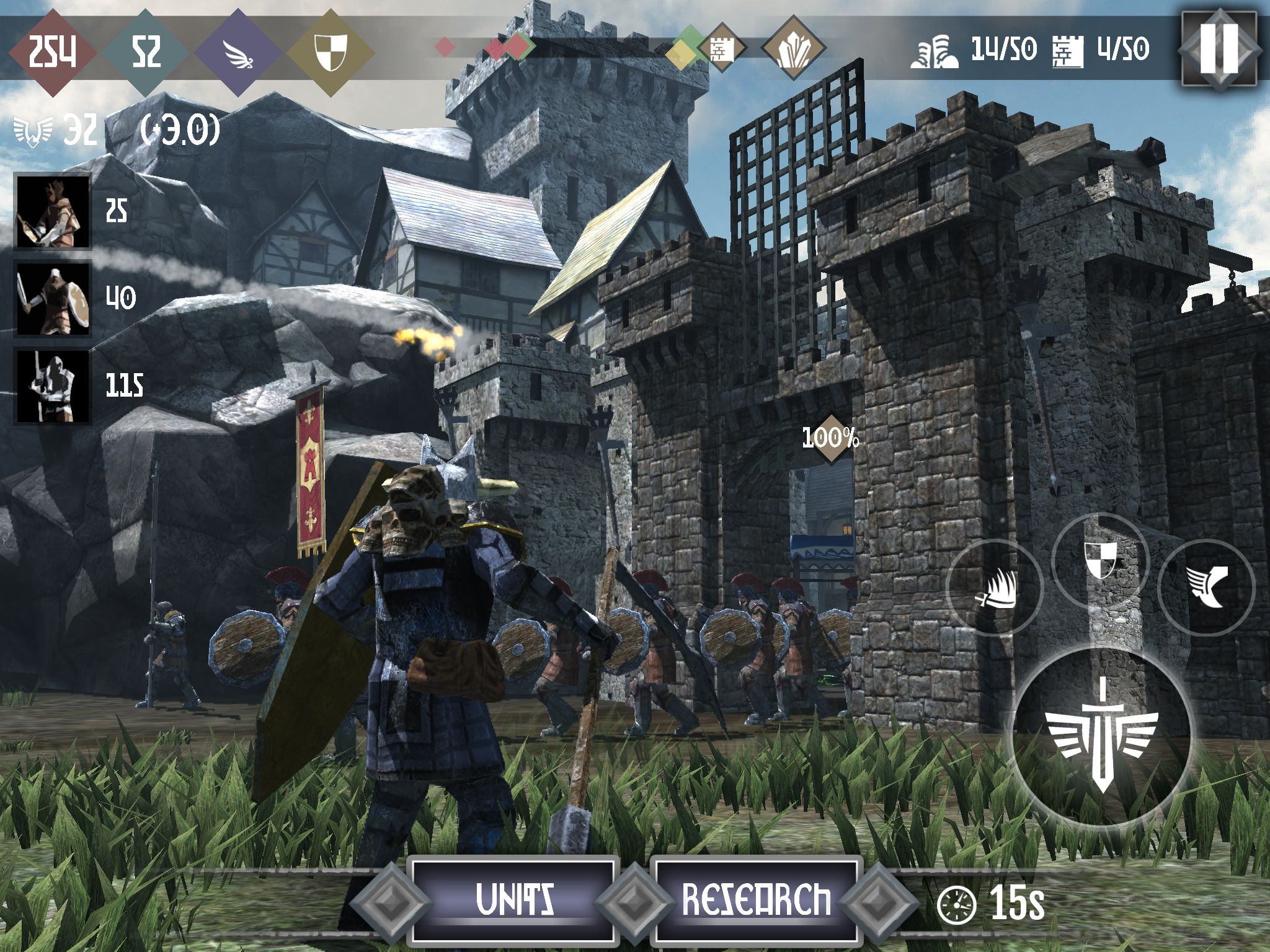 Heroes and Castles 2 thankfully delivers on its title. There are heroes, which you control; castles, which you try to defend; there’s both heroes and castles; there’s also at least 2 of each. In general, missions boil down to “there are bad guys, take them out." But you’ll have missions where you’re defending your castle from invaders, missions where you are involved in skirmishes with random batches of enemies, and ones where you have to raid your enemy’s castle before they destroy yours. Those latter missions are the most fun, just because so many games offer “kill everyone" levels. Fewer games offer you the opportunity to summon up an army of blunderbuss-wielding dwarves to go blow up the castle housing a skeleton army. That might have just sold you on the game, and hey – it’s $2 and it lets you destroy the skeleton army’s castle. It ain’t so bad.

The structure surrounding the game has you trying to protect your castle from invasions, while freeing other lands from the skeleton armies that have invaded. The new lands you conquer will net you bonuses and new units to use in battle, but they must be periodically defended to keep them. If you fail to protect your castle, which is the main progression, with 50 total waves, there’s no penalty. But if you die or your base is destroyed, then you lose that property. 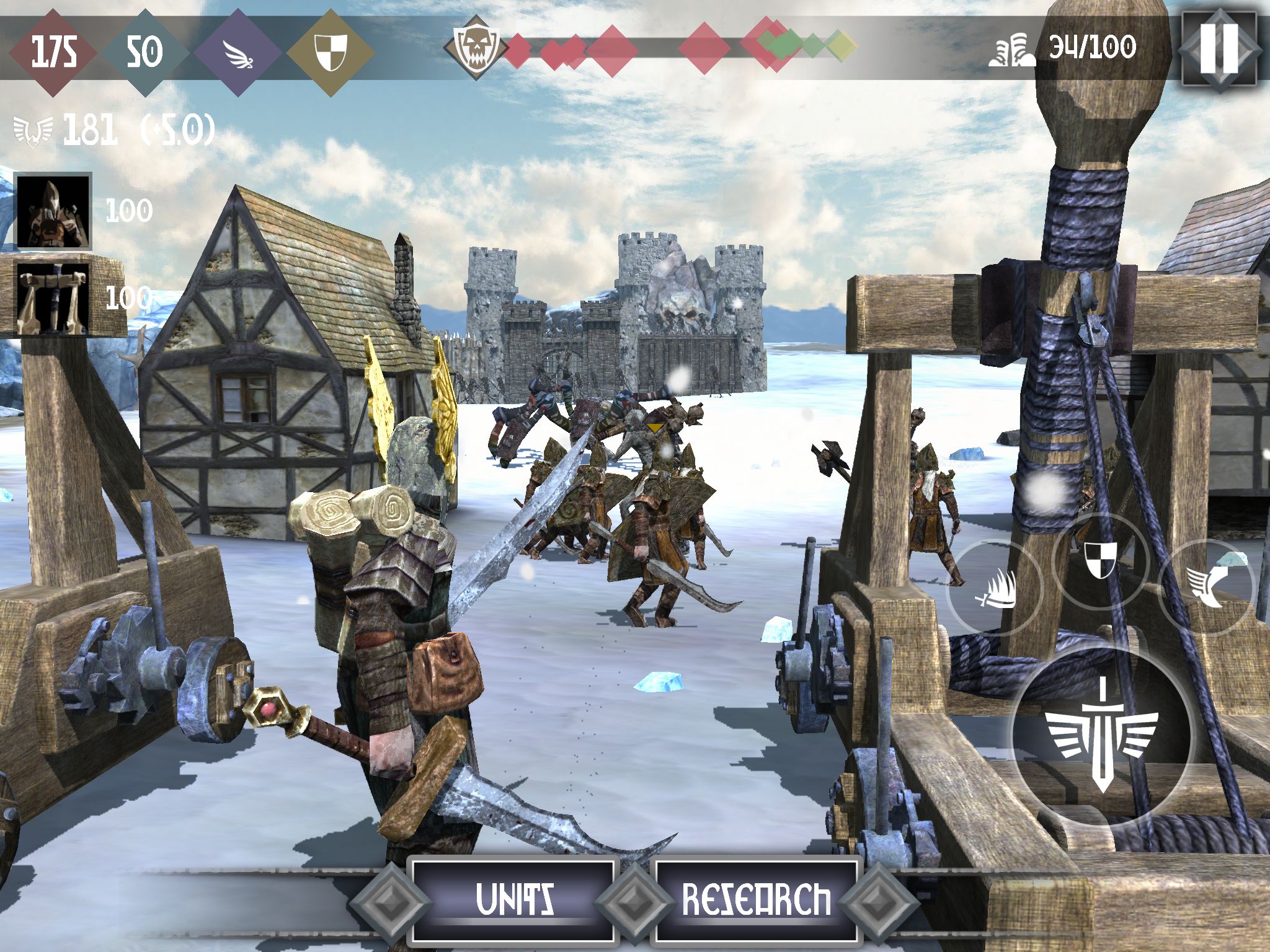 You will need to both summon up different units, using your recharging currency of command points to bring forth a variety of offensive and defensive units. Some have advantages against certain enemy types, so you need to be smart. Generally, getting to and staying near your maximum unit count is ideal for trying to win. You also will be running around the battlefield and attacking enemies, though if you die, you lose. Your character gains experience, can use a variety of weapons, and unlock different abilities along a skill tree.

Heroes and Castles 2 does a great job at keeping its disparate elements all tied together and working in perfect harmony. Managing both combat and unit-summoning is never too difficult, though I do wish you were notified more often of when you lost units. You know when your castle and bannermen are under attack, but you can easily get overwhelmed by the loss of units that you didn’t even know you lost in the chaos of war. Still, summoning up new ones isn’t so difficult, and the most important alerts do come in. The game constantly keeps you on your toes with invading armies, to where progression can be slow, but if you’re smart, you can get plenty of shots at expanding your territory. And if the singleplayer bores you, you can play online in both co-op and versus modes. Real-time online play on mobile games isn’t really my forte, but it’s there if it’s yours. 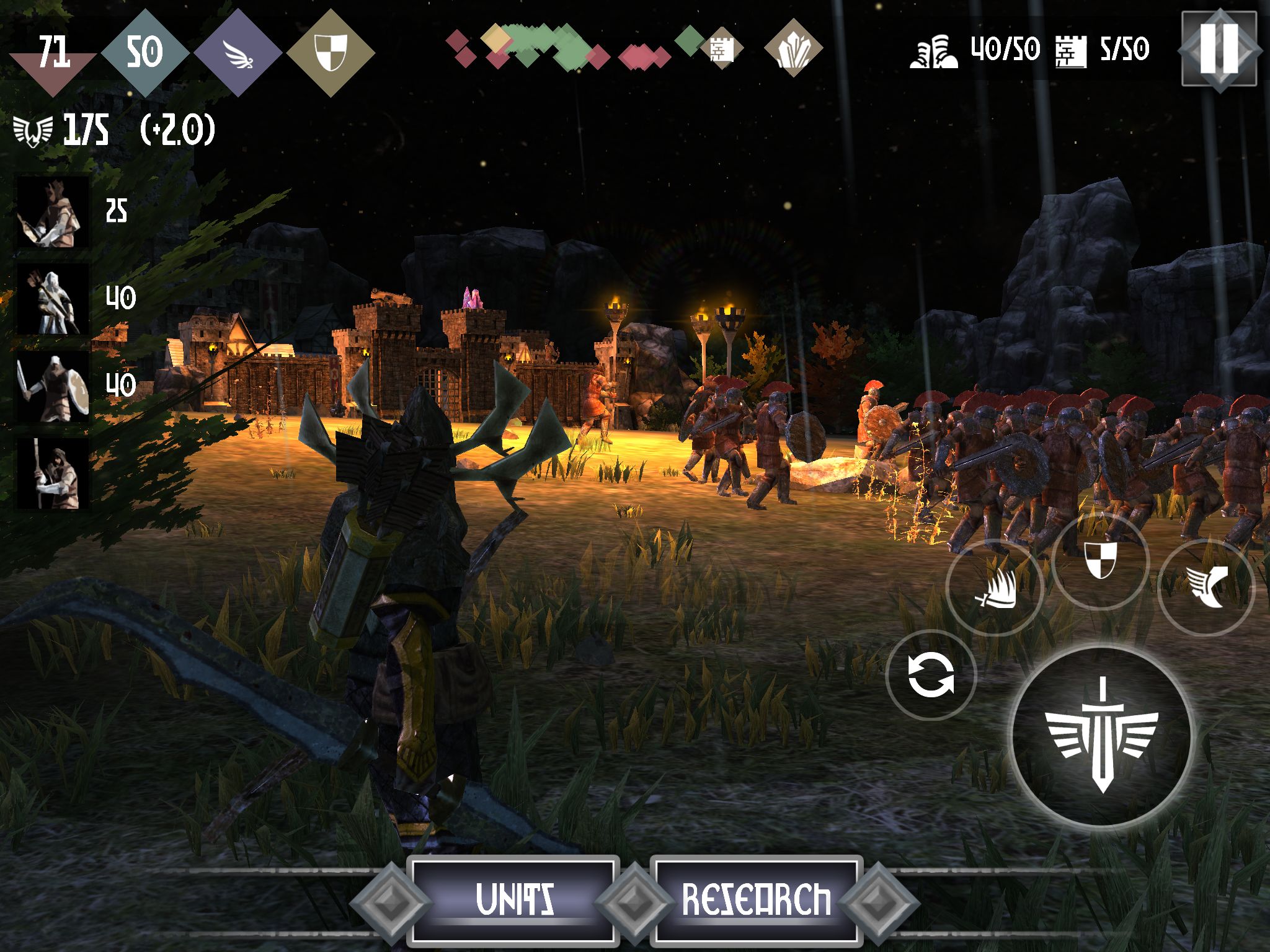 The prdouction values of Heroes and Castles 2 are great as you would expect from Foursaken Media. There’s gorgeous lighting effects. The heroes and enemies are all fantasy archetypes, nothing that stands out as particularly special or unique, but they all are detailed and look good. It’s a good-looking mobile game, and it runs super-smooth on the latest devices. If you find performance stuttering at all, you can configure specific graphic details.

Controls-wise, there’s a virtual joystick and buttons to use, but they generally work well. You regularly have to enter menus in order to use abilities and buy units, and the action thankfully pauses when you’re in these menus, so you can choose just what you want to buy. The game supports MFi gamepads, and while I thought all the touchy stuff you had to do would mean the game might actually work better with the touchscreen, it actually works amazingly with a gamepad. I highly recommend it. It’s perfectly fine without one, but it feels great with a gamepad. 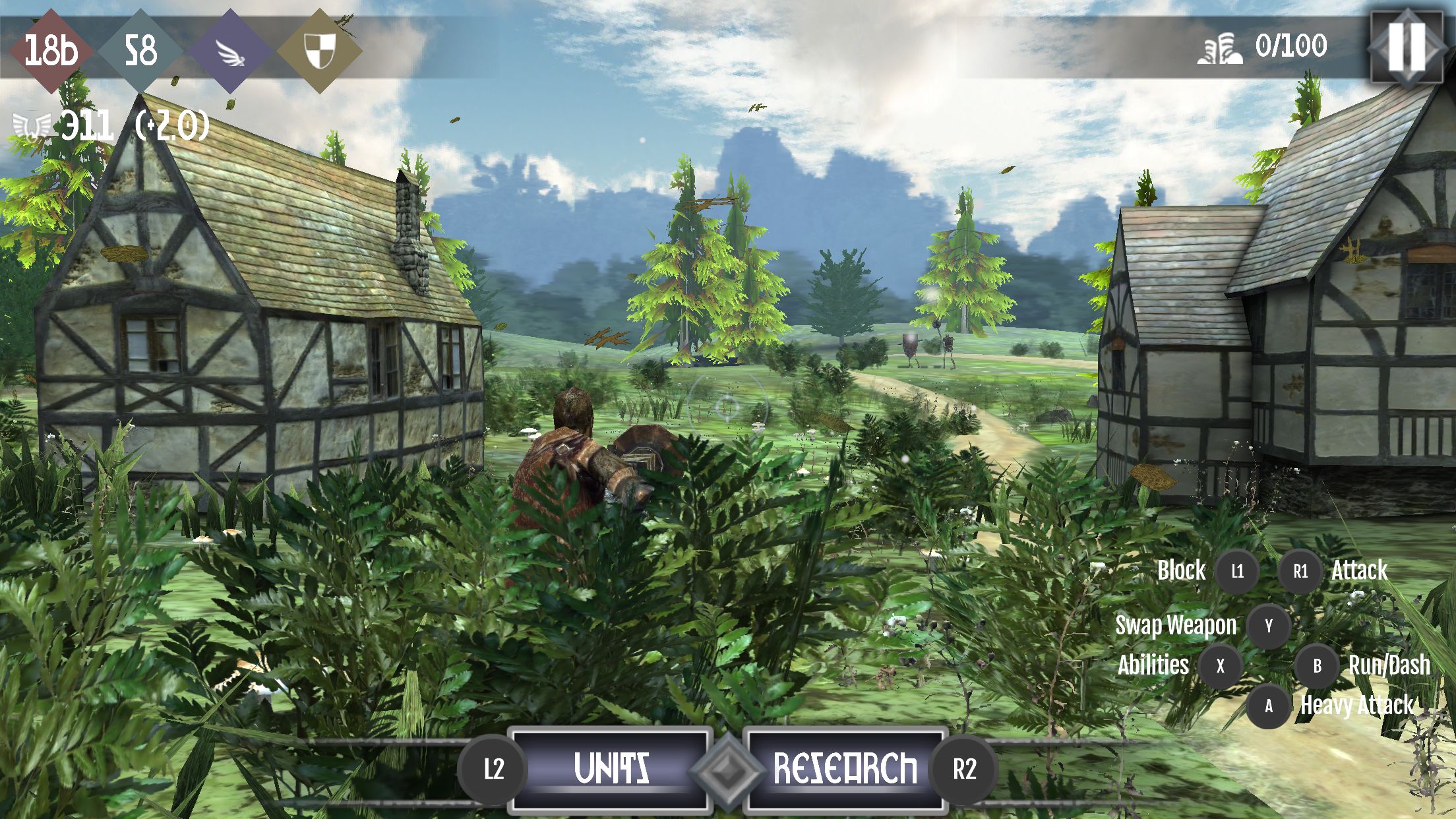 Heroes and Castles 2 is $1.99, but uses a currency system with consumable IAP. You can buy random new items, and buy upgrades for units as well. I’m left a bit uneasy by the idea that there’s a lot of stuff where you have to either hope that the luck of the draw goes your way in terms of a weapon you want, or to save up to buy powerful upgrades, particularly when even a $0.99 purchase would go a long way. It’s a $1.99 game, but I’d rather that Foursaken either go all the way free-to-play or to go with a premium price point and not worry so much about IAP in paid games. It’s far from the worst scenario in practice, as even common weapons will do well enough for you early on as long as you use them. And character upgrades can be had by replaying earlier levels. But still, it’s the kind of system that just leaves me feeling unhappy about it. It’s not awful, just not ideal.

I like Heroes and Castles 2…to a certain degree. I have a huge problem with it: I think it’s because it’s a terrible game to play on mobile. This isn’t so much about the quality of the product, just that it’s on the wrong platform.

The battles in the game aren’t really timed, and can go on for an unknown amount of time. Skirmish battles will eventually end, but raids could go on for seemingly forever, as far as I can tell. This is a problem if you get an email you need to check right now, as if you switch to another app, Heroes and Castles 2 closes pretty much instantly. Sure, that’s not a problem in theory, because this is clearly a very resource-intensive game. But the game doesn’t save in the middle of battles, so if you forget that leaving the app will eliminate your progress in any one battle, then whoops, too bad! 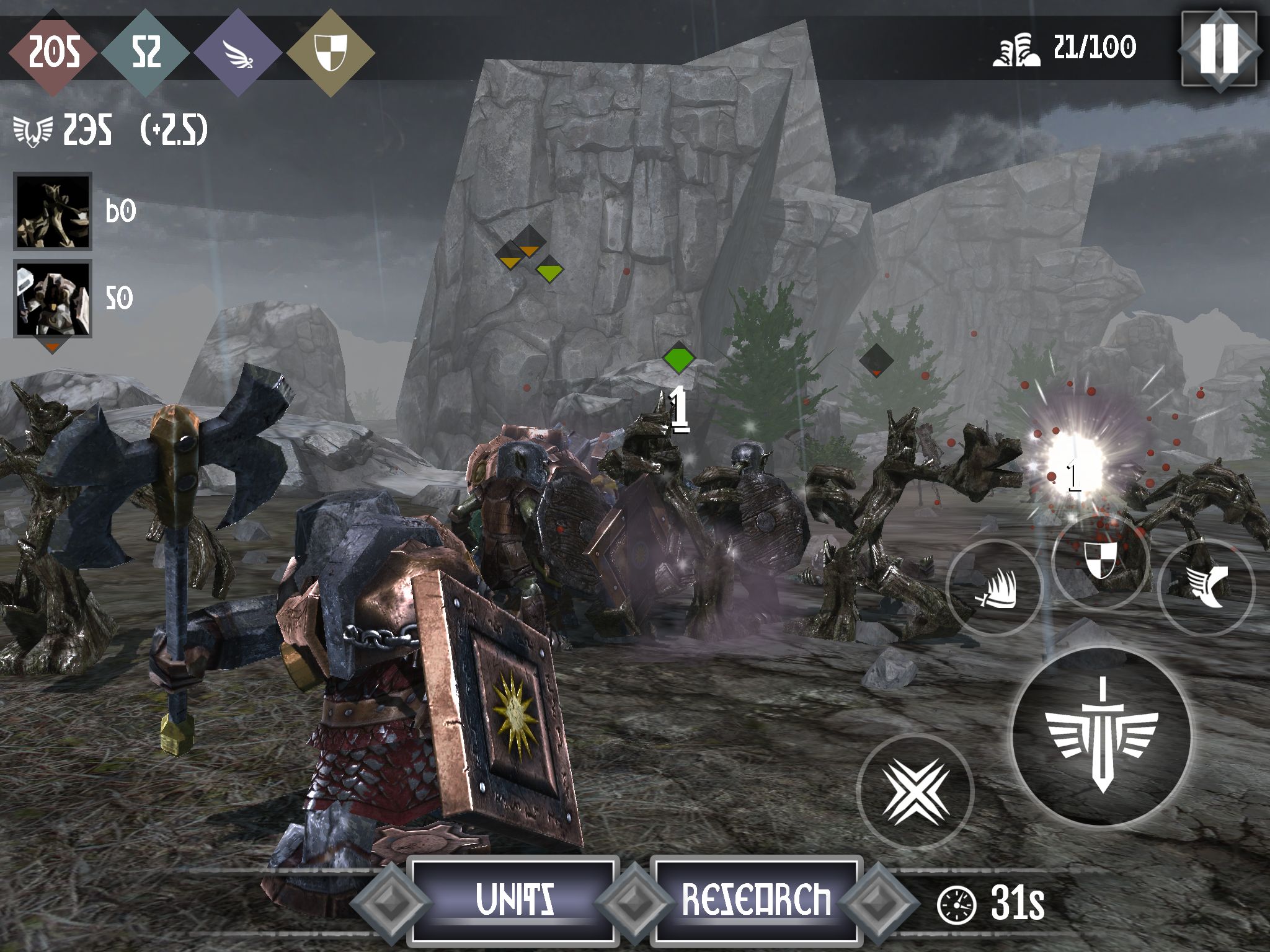 I really came to dread playing the game. Ironically, I was more mobile than ever recently because of some stuff going on in my personal life where I had to do a lot of traveling on public transit. But because there was always that fear that I might lose ten minutes of progress because I had to respond to a text message or to an important email, led me to stick with games with less commitment or less resource usage. Again, this is a problem that could be sovled if and when the game supports saving in the middle of battles. But right now? This is a terrible mobile game.

So definitely play this on an iPad if possible. I started on my iPhone and then couldn’t get iCloud sync to the iPad working, and iOS 8.3 blocks manual save transfers, so be careful if you want to play on your iPhone. I certainly lament that tablet gaming has been turned into something that’s just a companion to iPhone gaming, literally the same games on a bigger screen 99% of the time. I’d love to see more games that are tablet-exclusive, taking advantage of the different expectations of the form factor, the ability to charge more, and to create more in-depth experiences.

Heroes and Castles 2 really should be a console/desktop game. But people want these kinds of experiences on mobile. Still, if Foursaken didn’t have to aim for phones at all with the game, I think the experience could be better. Mobile games, and especially phone-friendly games, require certain design and technical considerations to be ideal for the platform they’re on, and Heroes and Castles 2 is subpar on mobile. It could be fixed, though, even with just in-game saving for when something needs your attention. Of course, plenty of people are going to think I’m insane for not liking this as an iPhone game, and hey: that’s what the comments section below is for. I’m a big boy, I can take it.

If you’re the kind of person who is willing to make sacrifices for console-style gaming on mobile, and doesn’t care if a game is a particularly good fit for mobile, then you’ll enjoy Heroes and Castles 2. If you need something that can be enjoyed in short bursts or can be dropped at a moment’s notice, if a lack of commitment is a feature not a bug for you, then I’d probably stay away from this. But please, whatever you do: play this on your iPad or whatever you’d consider your secondary device compared to the phone you use. You’ll enjoy the proceedings a lot more.