Legend of Grimrock($4.99) just landed on the app store. Almost Human decided it was time, and I couldn’t agree more. For those of you who are familiar, this port doesn’t disappoint. I never got the chance to play the PC version, but I am convinced I have lost nothing in the translation. If you only play one dungeon delving game this summer, I feel bad for you, but it had better be Grimrock.

The plot and general motivation for Grimrock is that you are a group of four prisoners cast into the top of a prison situated on top of a mountain. There are no guards preventing your exit, only a myriad of monsters and traps waiting to destroy you as you attempt to vacate through the bottom of the tower. If you make it, you are absolved of your crimes. The game is primarily a dungeon delving RPG with some puzzles and traps along the way. 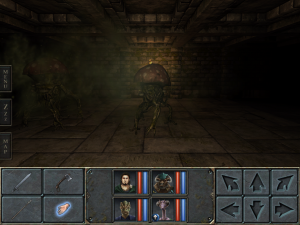 Character creation is very light compared to similar games. You pick a race, choose the distribution of stats and allocate a handful of skill points and then you are off. No character sheet is needed, just assign a few skill points each level and you are all set for the rest of the game. While I love in depth character customization, Grimrock manages to make your characters feel like they fit their roles without drowning hours of time into character creation.

LoG is a game that will hit all those nostalgic notes if you are old enough to remember any of the early D&D games or, my personal favorite old school RPG, The Bard’s Tale games. Your party has a single view panel and you move as a single entity filling up a single square on a large square grid. Sounds familiar, right? LoG has improved on the time worn formula by adding an action element to combat and puzzle solving. Now you can side-step enemies and back away from them and even maneuver around them to strike from behind. Puzzles involve real-time reactions and movements in order to solve as well. This means that eventually you will need to use little tricks and moves to keep up with the ever increasing challenge the game pits against you. At some points closing doors to limit the number of enemies you fight at once also plays a huge role in how well you can outmaneuver your opponents. 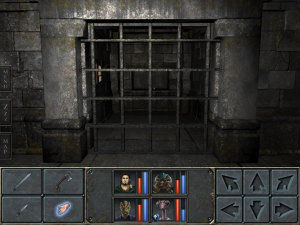 Grimrock is a crowd favorite. Our forums posters have been falling over themselves, alternately crying out in excitement, and, for those that don’t have an iPad, in despair. I have to admit I wish dearly that I could play on my phone as well as my iPad, but the quality of the port is really top notch and I can understand that a slightly smaller interface might mean more extensive UI changes. As it is, the game is beautiful. Lush spell graphics and atmospheric music and audio will have you frantically keeping an eye out for the monsters you can hear as they approach. The UI is smooth and responsive and with enough practice, the game gives you the freedom to run circles around your enemies.

I had to fight the urge to google my way through some of the tougher puzzles, but if you cannot contain yourself, rest assured there is a gargantuan amount of info about this game out there. At any point you feel you might be stuck(which might happen with any challenging puzzle game) there are tons of floor by floor guides that you can utilize to get past even the most perplexing labrynths.

Legend of Grimrock was a breakout hit on desktop and it should come as no surprise that it is just as good, if not better, on a mobile device. It is the new answer I have to the question “How do I show someone what old school D&D was like, without boring them with outdated game mechanics?" While the story line could have used a little more development, this is a very minor issue and should not keep you from picking this one up. This game is the perfect blend of modern action and classic dungeoneering.