Kindo ($1.99) is the kind of game I feel somewhat conflicted about. It’s a game that I like and respect. I appreciate it for what it is and everything that it does. I think the concept of the game is strong, easy enough to pick up on, while allowing for high level play. It does almost everything it needs to in terms of features. But it’s the kind of game that I personally won’t be playing long-term because it doesn’t give me the kind of satisfaction I like from games. 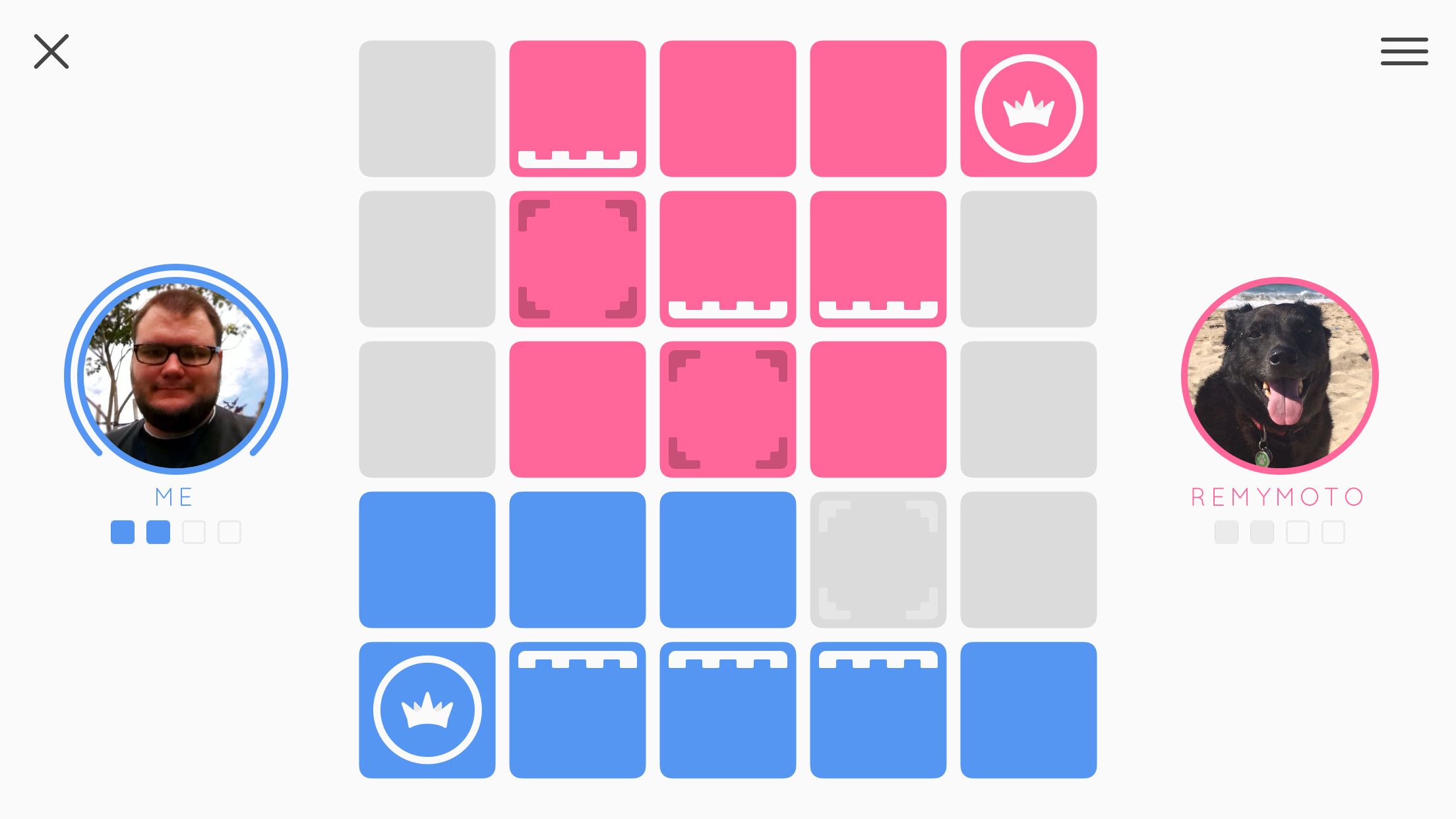 The goal of Kindo is to conquer your opponent’s kingdom square, in the opposite corner of a 5×5 grid. You get to make 2 moves per turn, and can either lay down a new square, or fortify an existing square. Fortification makes it impossible to capture that square from the foritifed direction. You can get up to 2 extra moves per turn by either cutting off opponent squares from any other connecting squares, or by having an opponent capture a square that you have just played. So, if you’re smart and can force your opponent into the plays you want, you can take advantage of them. And since the game board is so small, getting a 4-move turn is often a back-breaker.

Kindo is definitely a game where you have to be careful and deliberate. Against novice players, your mistakes may go unpunished. But against high-level players, I found that if I left one key opening, I’d often get punished right away. I started to detect these mistakes shortly after I sent the moves, which caused many profanities to be uttered to myself over how stupid I was. Thankfully, most of my high-level matches (from veterans of the betas) were friendly matches via Game Center. If you play a random opponent, there’s an Elo ranking system that will track how well or how poor you’re doing and try to match you up against similar opponents. 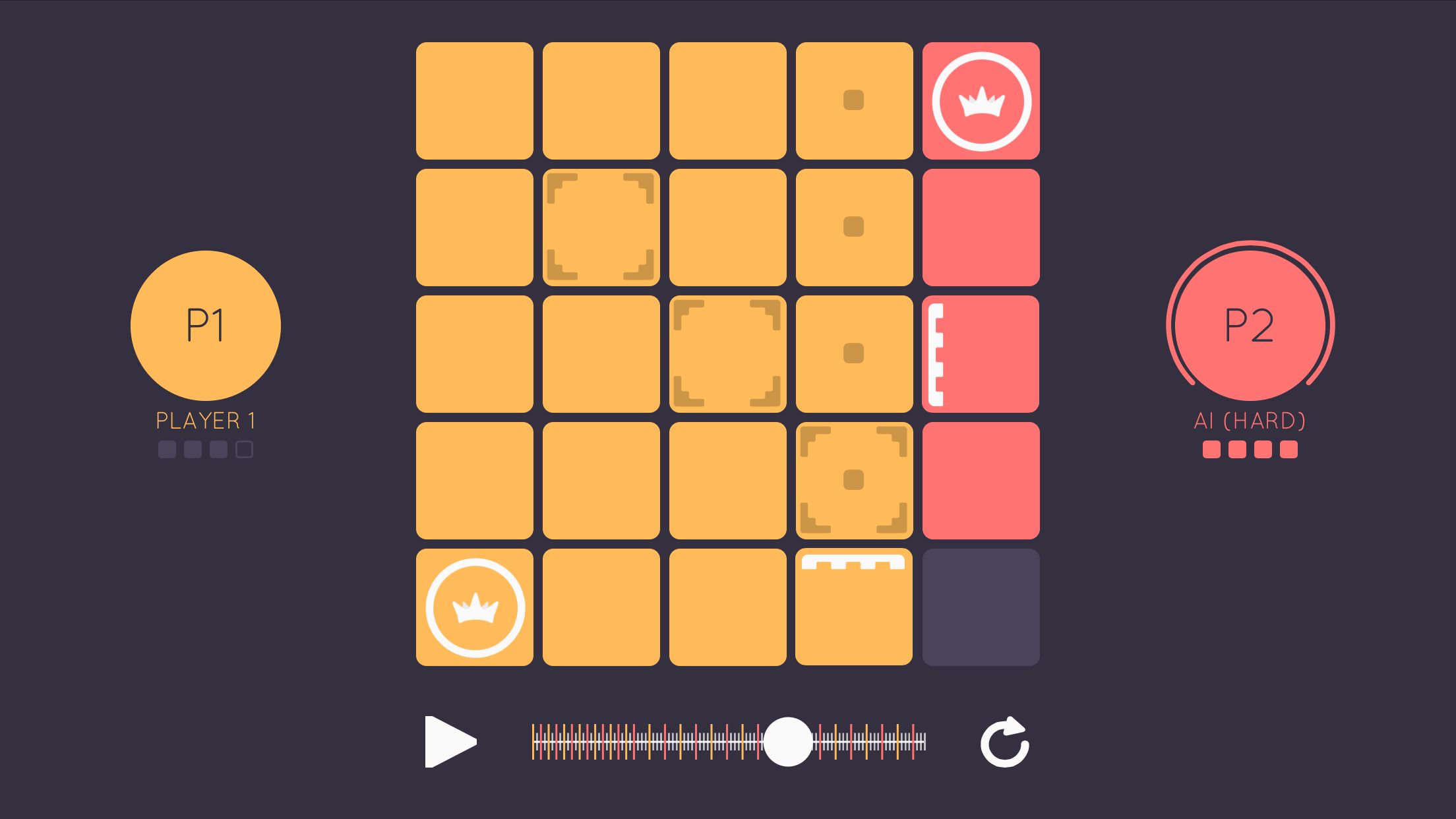 Kindo is definitely the kind of game that’s easy to learn but difficult to master. The rules are simple enough, with a brief tutorial to play. Once you understand the mechanics of the cut-offs and not taking fresh squares to not give opponents extra moves (unless it benefits you long-term!) then it all clicks. It just becomes about learning your preferred strategy, and how to counter opponent moves. You can share match replays, and these can allow you to analyze your matches on a turn-by-turn basis. You’ll often see where you or your opponent could improve. It’s the kind of game that’s rewarding, and meant to give back satisfaction if you put in the tough effort to do well.

Kindo comes loaded for bear with features. It has a limited target to hit since it is a minimalist strategy game, but hey, it still does everything it needs to. There’s multiple stylish visual themes to keep the game looking fresh if you grow bored of one look or don’t like the default colors. There are AI opponents to play. The Easy AI lives up to its name, Medium is going to whoop you for a while, and Hard might be easier than Medium, at least at launch. This is because there are so many calculations for the Hard AI to make that it sometimes misses the ideal choice, according to the developers. It is being fixed, so get your licks in on it right now while you can. But hey, at least you have some instant-gratification opponents to take on. 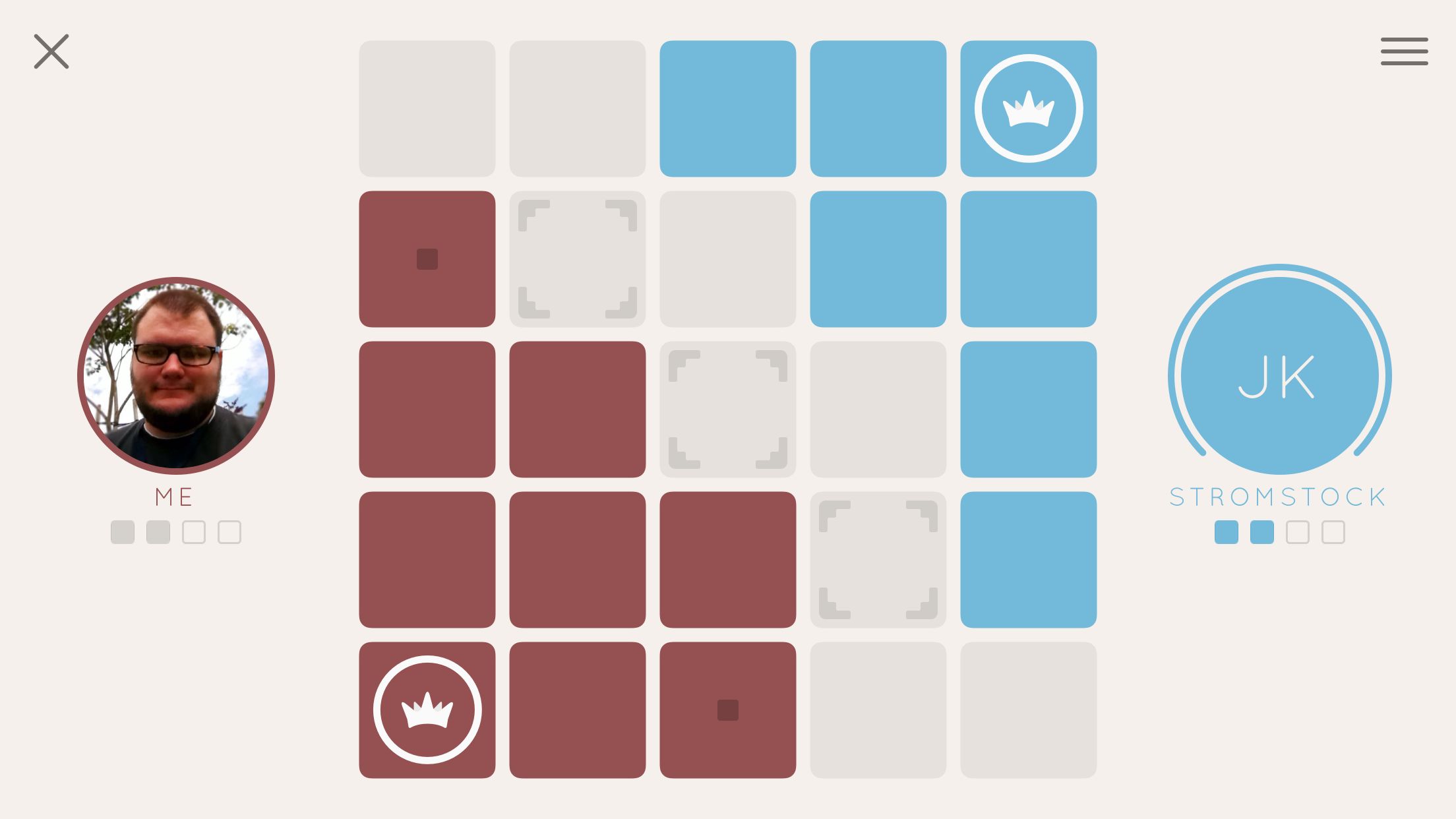 Kindo‘s Game Center online multiplayer works, though it could work better. I don’t like the annoying, over-the-top default Game Center notification sound, I wish it used something classier, and less ridiculous than the default fanfare. That’s better than the old pre-iOS 7 horns that could wake the dead, but still, I prefer something more subdued. You can play matches and stay in them to get updated when your opponent plays their moves and so you can go right away. This is somewhat imperfect, however: I’ve had opponents make one move, then wait to finish out their other ones, and had to close the app and reopen it to see their turn. This is the other Kindo issue: there’s no pull-to-refresh or other similar mechanism to see if you have new turns other than to hit the home button and reopen the game. We demand refreshment!

Kindo supports both landscape and portrait modes, and this tiny feature matters a lot more than you think it would. Portrait is great on the iPhone for just playing whenever, this isn’t a game that I would ‘need’ landscape from. But if I’m switching from a landscape app to play a turn in a Kindo game, I like that I don’t have to turn the phone. And of course, for local play on an iPad, this allows you to keep it propped up with the Smart Cover for easy play. It’s just a feature that makes perfect sense to have implemented, and I wish more games were orientation-independent if at all possible. 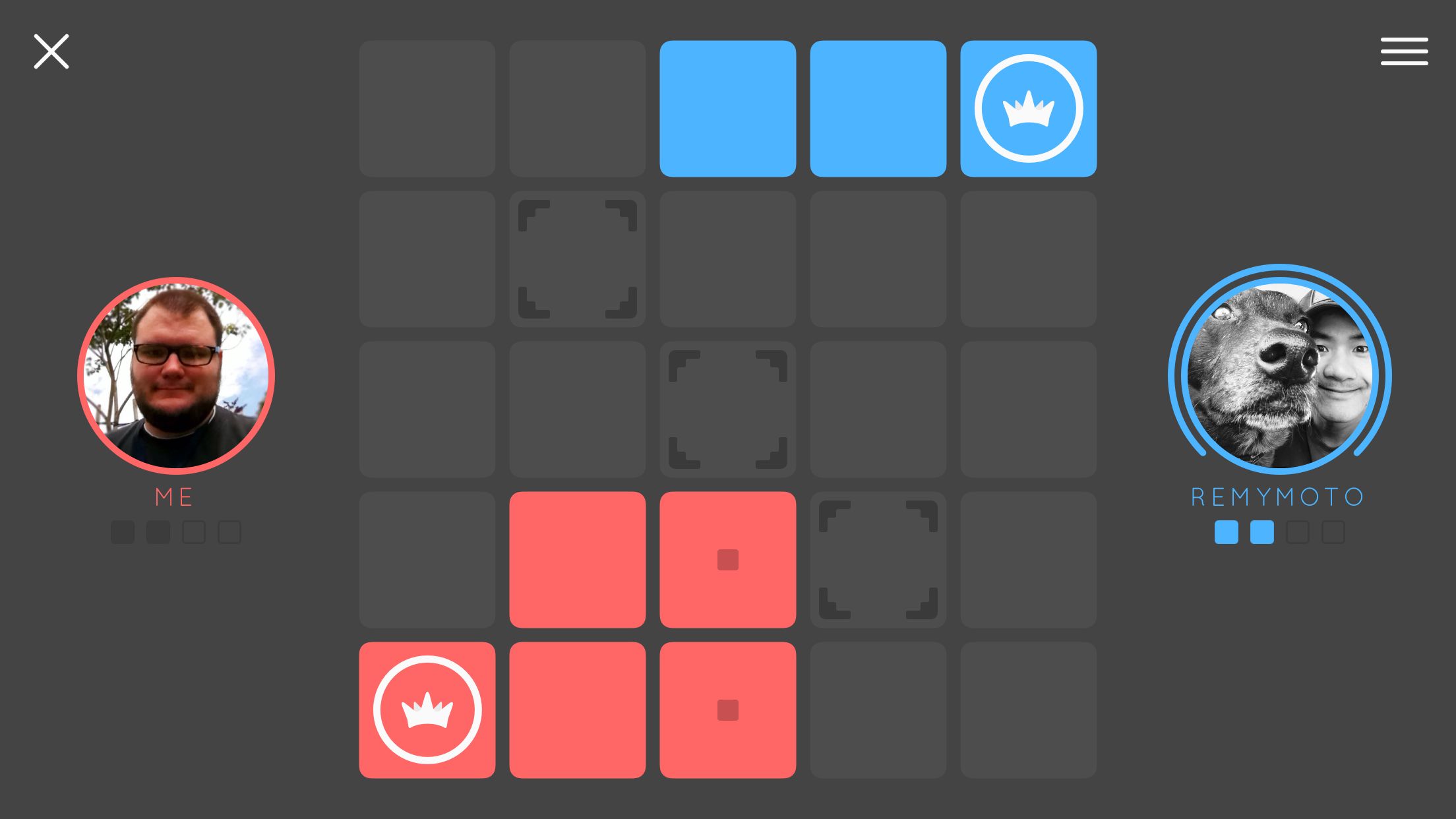 So, I’ve said a lot about Kindo, and I’m a huge fan of the game. But once this review is done, I might not play it again. Why is that? Well, Kindo is a game where one mistake dooms you. Every match is a long-drawn staring contest, where one slip-up, one ill-considered move, means that it’s game over. This isn’t the kind of satisfaction that I’m looking for from the games I play. Especially in an online turn-based multiplayer game like this where a match can take a while to play, it becomes dispiriting when one screw-up costs you so heavily. And it can be difficult to remember what a strategy is when you’re managing several games at a time. These aren’t the fault of Kindo as much as they are a problem with any game with turn-based multiplayer. And there are going to be people who enjoy the kind of tension that comes from being super-careful, from trying to make sure that you never screw up when the chance arrives. That’s not so much my style. I like my screw-ups to either have immediate repercussions, or I prefer a more forgiving game. I’m not the careful type!

But don’t take these as criticisms again Kindo, they’re my personal tastes. If your tastes are similar, then you may want to avoid it as well. But this otherwise is such a well-crafted game for $1.99 that I recommend it anyway. I like the game! I’m just glad I don’t have to play it and get beaten down by better opponents any more!