Kixeye’sVEGA Conflict (Free) has been out for some time on Android and desktop. If you aren’t familiar with this Facebook integrated game, think Clash of Clans with space ships and a much more interesting combat system. The IAP is real, The in-game timers are real, but this is still a hot game. What I have been wondering though is how much gameplay is lost in translation to iOS. VEGA is not your typical Facebook game. Sure you have to sit around and wait on timers and micro manage your space town. The town, to me, isn’t really where the game takes place. It’s kind of more like an extended UI for the best part of the game, the combat. You get to outfit and pilot a fleet of ships with a very simple interface that has some surprising depth and a high level of skill needed to master.

When you aren’t dog fighting, you will be improving your stuff. New ships, base components and upgrades are all researchable but the upgrading process is pretty restrictive. Any building you choose to upgrade must finish before you can upgrade another, so you might be stuck for a few hours if you end up choosing the wrong building upgrade. The ultimate goal for this game is to level up your base and your star ships, take down bigger and badder enemies, develop better weapons and armor, and basically just be the baddest dude or dudette in the universe. 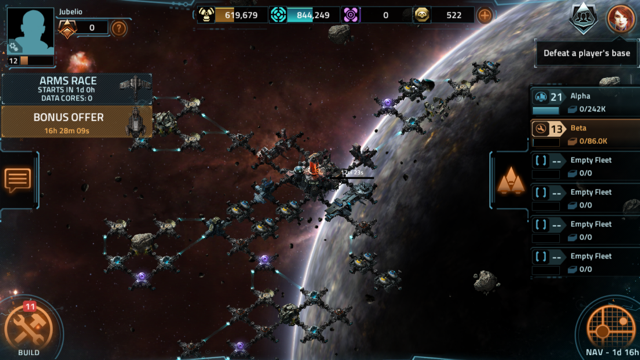 A large part of this game is building and maintaining Alliances with other players. This is primarily a multiplayer game and, just like Clash of Clans, you can assault enemy bases to steal resources and try to ruin someone’s day. The really nice part of this is that your building times can be reduced a bit with a simple tap to request aid and your Alliance buddies can tap on your request to join in. There are no restrictions on how much help you can offer. It serves primarily as an incentive to be a part of an active Alliance.

I mentioned my curiousity on how well the port would be handled. On the surface, the game looks and sounds really cool. The touch interface in combat functions admirably. After some research, however, I am not sure the touch controls can really hold up to the precision the desktop version provides. This would be less of an issue except that everyone plays together – Android, iOS and desktop versions all intermingle. I fear that when it comes to dog fighting, the mobile users are going to end up getting the short end of the stick. Take the following video as an example of what an agile combat looks like on the desktop format:

I just am not sure this can even be done on a phone or tablet, and definitely not as easily. In my opinion it is a small concession that must be paid in order to play away from a desktop, but bear in mind that this means that if you go full bore into this game, expect to eventually switch to a mouse and keyboard for some of the tougher stuff. One big side effect from this is that if you are just joining in, there are going to be a lot of people further ahead than you. I haven’t had too much of a problem due to this, but someone starting out is not going to be anywhere near the front of the power or leveling curve.

This is the first review I have completed with my brand spankin’ new iPhone 6+, and performance is solid on both it and the old trusty iPad 3rd gen. At 288 mb, it’s a typical mid-range app. There is only the occasional jitter when network connectivity is being established in combat, but it doesn’t seem to have too much of a negative impact. 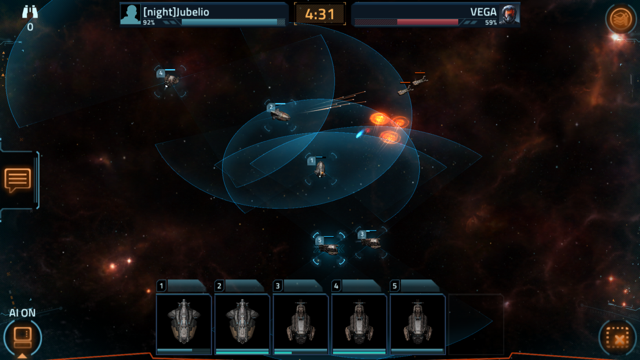 Ultimately I think VEGA Conflict is a mixed bag that some gamers could take umbrage over certain design decisions. My personal opinion is that it’s a free to play game that doesn’t keep you from doing the fun stuff, and it’s an improvement on an established formula. If you’ve made it this far through the review and haven’t been triggered by the normal free to play stuff, VEGA Conflict is probably for you, go grab it and I’ll see you out there.