Like everyone, I have my own set of personal biases and preferences that I have to work around. I love RPGs, but after years of social games and broken hearts I’ve come to flinch when I hear anything about a card battle system. I like card games well enough, but when they’re used as an RPG concept, they tend to overtake the whole game. That’s not to say I’ve never enjoyed an RPG with a card-based battle system. The Baten Kaitos games on the Gamecube were pretty good, and I certainly enjoyed the somewhat recent Card City Nights ($0.99) from Ludosity. But I’m not going to lie, it dampens my enthusiasm for a game just a little bit when I hear that cards are a major component. Because of that, even though Trulon ($4.99) was coming from a developer whose work I’ve greatly enjoyed in the past, I was still a bit hesitant as I loaded it up.

Trulon comes from Dicework Games, the developer behind the wonderful Rimelands: Hammer Of Thor ($4.99). In some ways, it’s quite the conventional RPG. There’s an overworld map where random encounters can occur, dungeons and towns to explore, and side-quests to solve. Battles are turn-based and you’ll eventually have a full party of characters at your disposal. Winning fights earns you experience points towards gaining levels that will power up each character. In other ways, it’s quite different. Hit points are restored at the end of each battle, but magic points aren’t. Each character draws their attacks from a selection of cards which are only refreshed when the battle is finished. Rather than equipping gear to each of them, you’ll instead equip passive abilities, some of which are on all the time, others only activating when you play cards marked with a special symbol. There’s a fair bit of luck mixed in with the strategy here, and though it sometimes feels like too much, it helps to make each battle more tense than the usual fare. 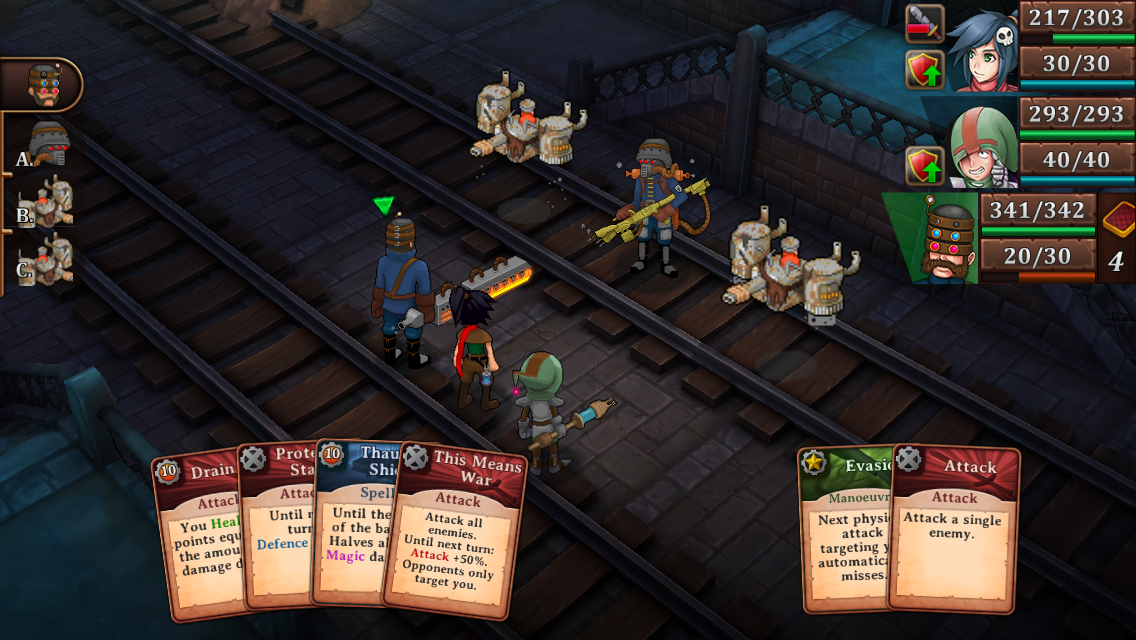 The story is interesting enough, following a young monster hunter named Gladia whose work ends up dragging her into a political conflict between neighboring nations. You’ll likely see most of the twists coming, but it’s a fun backdrop for the gameplay and it keeps our heroine on the road, moving from place to place. Trulon isn’t a terribly long game, running around seven or so hours, which ends up being just right for the gameplay but perhaps a little less satisfying when it comes to the overall plot. This is a fairly interesting world, but it seems like the pace is a bit too hurried at times to really stop and appreciate it. I would have liked to have had more of the characters fleshed out a bit, because even setting the usual NPC townspeople aside, nobody really has a chance to stretch their legs in the script. As it is, most named characters exist only to hand you your next quest. It’s hard to get all that invested in them.

Luckily, the gameplay is much more engaging. Though it starts a bit slowly, the difficulty soon ramps up. There are two ends to the strategy in Trulon, and both of them are very enjoyable. Like any card-based game, you’ll want to construct your deck carefully. Having lots of cards ensures that you’ll rarely be reduced to relying on the random wildcard draws, but it also reduces your odds of pulling the cards you might want for a given situation. Setting up combos between your party members requires each of them to be holding the right card at the right time in their hands, a situation you might want to encourage by leaving filler cards out. Making combos is just one part of why I enjoy the battles themselves. There are lots of interesting factors to consider in a fight. Stat buffs and debuffs, status ailments, one-use shields, and more make for an excellent range of options. You can set up your deck to come out swinging, turtle up in the early turns to buff defense before striking back, or focus on indirect ailments to set up deadly follow-up attacks.

The card system that I was worried about ends up being little more than a way to keep you from spamming your best moves every round. When a battle starts, each character will have a selection of cards dealt to them. You can use any of those cards to perform an action, but once used, you won’t see that particular card again for the rest of the fight. Some of your equipment will give you special effects that fire off when you use an assault card. These are cards marked with a lightning bolt, and they’re randomly selected at the start of a fight. In addition to those cards, you’ll always have one basic fight command card and one other wildcard that you can make use of. The wildcard is drawn randomly from all of your cards, and any character can use it as opposed to just the one it’s equipped to. Once you’ve made use of the card, it’s replaced with another one. These cards are sometimes just what you need and at other times quite useless, but you won’t get another one until you use the one that’s out somehow. Unlike with your main hand, there’s no real way to game the wildcard. Between that and which of your main cards the game chooses to mark with a lightning bolt, the same battle can have a very different flavor to its difficulty. 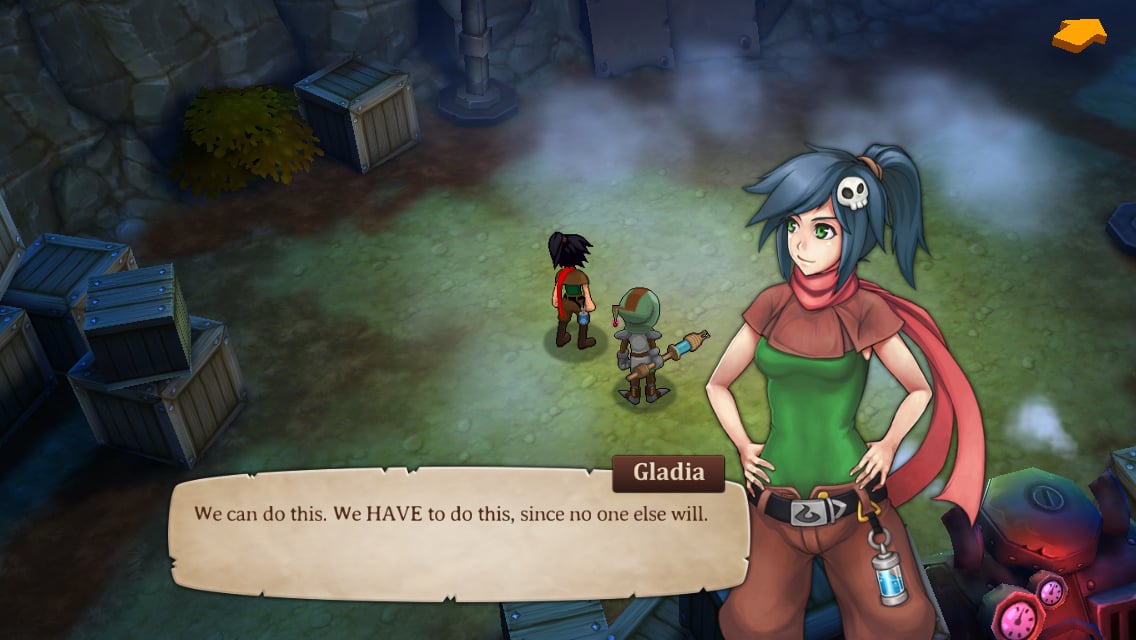 The luck never overwhelms the strategy, though. Yes, you might have to try a fight a few times to get a more favorable set-up, but it’s ultimately going to come down to how well you manage your general strategy. Every battle is fun, a minor miracle for an RPG with random battles. It helps that the battles are only random on the overworld map. Once inside a dungeon or other location, the game more takes after Chrono Trigger ($9.99), with preset groups of monsters in particular places on the map. Unlike that game, once these enemies are cleared, they’re gone for good. As the overworld map provides opportunities for those who want to grind, there’s really no downside to this approach. It allows you to clear out areas as you explore them, allowing you to backtrack without worrying you’re going to get penalized with another enemy encounter. The dungeons aren’t overly big, but you’re usually required to scour every corner to satisfy one quest or another. It would be nice if the game had some kind of mapping system. It’s a bit too easy to get turned around or lost in some areas, and keeping paper maps isn’t exactly practical for a mobile game.

The biggest problem with the exploration, however, is your character’s plodding walking speed. Barely an hour into the game, I would have done just about anything for a sprint button, but no such deliverance was to come. That’s my biggest gripe with the game, to be honest. Yes, I might have liked it to be a little bit longer, but I felt like it gave me plenty of time to enjoy the mechanics without making me sick of them. Otherwise, it’s hard to find much to dislike. The visuals are gorgeous, with a variety of locations that range from forests bursting with color to cold, dark laboratories. Sometimes you travel during the bright daylight, while in other places, you’re having to dodge spotlights piercing through the darkness the night. Enemies cover a wide spectrum including humans, monsters, wild animals, and even robots. They all have their own sets of abilities that you’ll want to learn so that you know how to effectively counter them. The music isn’t quite as varied, but what’s here is excellent. I especially enjoyed the battle music, which sounded like it wandered out of a modern Falcom game. There’s even a nice list of Game Center achievements to work for, if that’s your thing.

While the battles are easily the most compelling part of Trulon, the game presents quite a strong package overall. The pace of the exploration could do with a serious speed boost, and I would love if there were some sort of auto-map. I suspect some people might find the game to be a bit too unforgiving at certain points, and while I’m personally fine with its somewhat brief length, it’s probably not going to satisfy someone looking for a 40-hour story epic. As for me, while I can’t say I would mind having more of this kind of quality experience, its battles were intense enough that I’m glad it didn’t even come close to overstaying its welcome. It’s also really nice to have an original single-player offline RPG without even a hint of IAP in it. They’re getting harder to come by these days. Trulon is another strong effort from a developer that clearly knows what they’re doing in this genre.