Over the course of my entire iOS lifetime (which started in 2009), I’ve probably played a couple hundred runner games. Although I haven’t given them an equal time of day, for some reason the genre just doesn’t get old, and I can spend at least an afternoon with them as long as they’re semi-competent experiences. Kayos (Free) is another cool little endless runner based on flight that won’t garner your interest long, but enough to make an impact.

With a clean, simple interface, you’ll start off with a Star-Fox-esque glider, simply capable of boosting and movement — that’s it. To boost you’ll tap anywhere on the screen, and left and right pitching is taken care of by way of moving your device.  You can invert the steering and calibrate your device, but there is no option for a “left side, right side, middle boost tap" control method. It only takes a few sessions to get used to the motion controls, but I wish there were other options available. 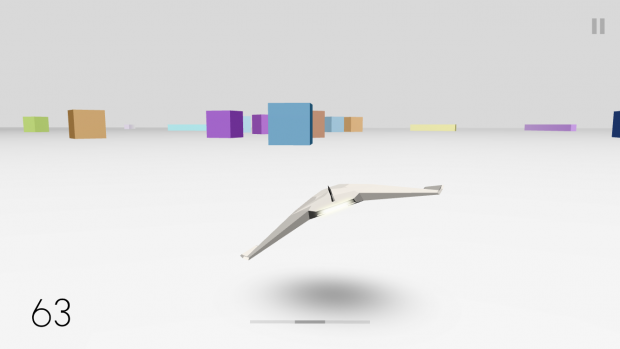 Instead of a fully randomized adventure from the get-go, Kayos generally sticks to a theme, almost like a traditional platformer, at first. While objects in your view may not appear in the exact same spot, you’ll traverse through similar looking scenery before moving on to other sections that will change things up a bit. I like the dynamic feel of it all, as objects could come tumbling down at any moment.

The boost mechanic is really the core draw of the game, mostly because of how brilliantly muted it is. Boosting gives you no obvious advantage other than an easier means to smash into hazards, but the more you boost, the more your shield meter grows — if it reaches its maximum level, you can stave off insta-death for another hit.

I really like having that shield buffer, but I like the fact that you don’t even have to use boosting even more. Boosting is about an inherent risk-reward factor, and adds depth to an otherwise cool looking, but simplistic runner.  That simple style works though, as the pulsing soundtrack gets you sufficiently pumped to wreck shop, and the visuals are clean, bright, and bold. Don’t worry about IAP — what you see is what you get.

Like a lot of endless games out there, Kayos doesn’t break the mold or check any boxes than you’d typically see checked by the genre. It does, however, offer up an escape for a short while into a beautiful opaque world of sights and sounds.