One of my favorite aspect of strategy games is the clash of wits and the constant attempt to outmaneuver your opponent. Yet, AI opponents never really give me those glorious moments that a strategy board game can, the knowledge that you’ve just outmaneuvered someone who sees and understands the game in the same way you do but still couldn’t figure out the trap you’d been setting the last few turns. So, when I first heard about Subterfuge, a one-week long multiplayer game of strategy and diplomacy currently in alpha developed by a team consisting of Ron Carmel (of World of Goo), Noel Llopis (of Amazing Alex), and artist Shane Nakamura (of Zombie Gunship), my strategy sense started tingling. According to the developers, the game was greatly influenced by Neptune’s Pride and Diplomacy, which is music to my ears. After spending about a week with the game, I have to say that I’m really looking forward to the game coming out because Subterfuge really brings diplomacy to the fore and will be a great game to play with friends (as long as you don’t mind losing a few of them after you double-cross them for the tenth time).

At its core, Subterfuge has just a few basic mechanics – you play with up to nine other players in a beautifully-designed minimalist map populated with numerous outposts (the outposts are either be factories, which can be transformed into mines, or generators). Your goal is to collect a predetermined amount of Neptunium either by mining it or, well, stealing it. Each player starts with a Queen and a few factories and generators, and the rest of the map is filled with unclaimed outposts. And then the fun begins. Your factories produce drillers (machines that can both drill for Neptunium and fight), and your generators produce the power necessary for your factories to operate. 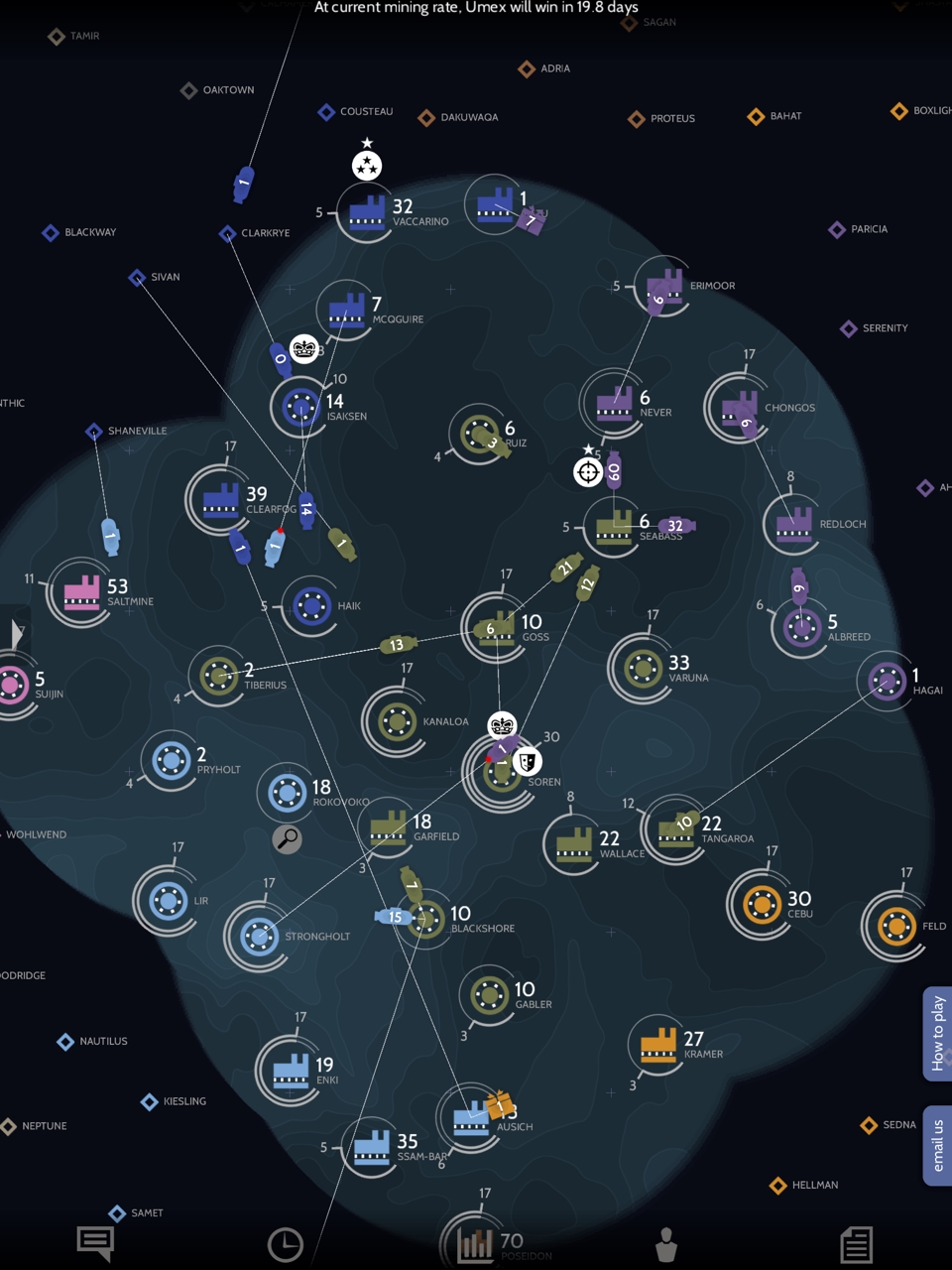 If you want to take over an outpost, you send a submarine filled with drillers, and in the ensuing fight superior numbers win unless there are Specialists involved, whose existence gives the game great strategic complexity. To be honest, I began my first Subterfuge game thinking that it would be all about timing my sub moves correctly, but the presence of the various specialists (you get to choose one out of a random group of three every 16 hours) forced me to develop some very complex strategies to win. The game’s UI is excellent (and would make Apple’s Jony Ive proud) in the way it provides the necessary information regarding the battle outcomes, and Subterfuge‘s “Time Machine" feature enables you to arrange future battle plans (which means you can attack your friend’s factory while you are actually sleeping and dreaming of attacking your friend’s factory).

While Subterfuge‘s mechanics are very sound and make for a fun strategy game, it’s the diplomacy feature that really makes the game stand out. Diplomacy in games often starts out as a great concept but then falters in execution, but I think that Subterfuge is getting it as right as a game can by giving you plenty of diplomatic options. In the game I’m currently playing, I have a tentative alliance with two of the eight players, and we are organizing attacks against two other players (one of the players we are attacking thinks I’m on his side and the other thinks I’m neutral). For the last two days we’ve been exchanging information regarding various outposts and planning attacks (the game has fog of war so you can’t see beyond your sonar range).

Subterfuge is still in closed-Alpha, (which you can apply to join here), but it runs very smoothly on both the iPad and the iPhone. You can follow the developer’s blog if you are interested in game design or simply want to see how the game has been changing throughout its development process. I’m really looking forward for the game releasing because it’s the perfect game to play with friends (the TouchArcade forums will make it easy to find people to play with). So, keep an eye out for this game if you enjoy well-made strategy games that put a premium on winning by diplomatic means while also allowing for entertaining military victories.