One of the main complaints I hear about traditional gamebooks is that they’re too difficult. It’s fair criticism. When we think of gamebooks, we generally think of things like the Fighting Fantasy series or Lone Wolf, and both of those make liberal use of some nasty tricks at times. If you’re playing an Ian Livingstone book, you’d best be rolling the best possible scores, and if you’re playing a Steve Jackson adventure, I hope you’re searching every nook and cranny and picking up everything that isn’t nailed down. The worst offenders are designed around a so-called golden path, the one correct sequence of actions that can take you to the ending, but even the best will sometimes kill you for flipping to the wrong page. It’s little wonder almost everyone cheat at the things to some extent.

Perhaps that’s part of why gamebooks have made such a strong resurgence on mobile devices. For older books, new difficulty settings and a few built-in cheats make it a lot easier to make your way through the story. Newer books can take advantage of more flexible limitations in the media to find different ways to present a challenge. Still, it feels exceptionally satisfying to actually finish a traditional-style gamebook without any assistance. For those who are new to the genre or just plain unlucky, there aren’t actually that many good options when picking from the ones that follow the orthodox style of flipping pages in a virtual book. That’s where the Spellcaster series of gamebooks from writer Louisa Dent Pierce and prolific gamebook publisher Tin Man Games comes in. 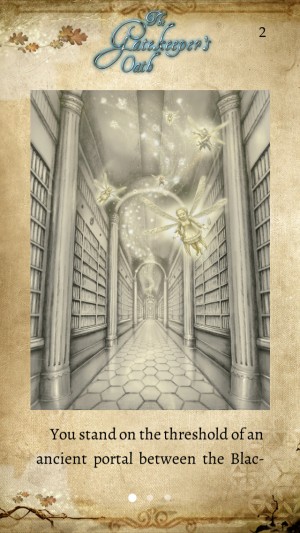 Spellcaster: The Gatekeeper’s Oath ($1.99) is the second of a planned trilogy, following up on 2013’s Spellcaster: The Forgotten Spell ($3.99). Interestingly, the first game is an adaptation of an existing physical gamebook that was published in 2006, while the remaining two books have yet to be set to paper. That makes this digital version the first chance for readers of the nearly decade-old Forgotten Spell to continue their adventure. Thematically, this series appears to be aimed at the Harry Potter crowd, with its heavy emphasis on spell-casting, the hero being a young boy wizard, and the text’s relatively restrained approach to violence and gore. The length and difficulty bear that out. Like the first in the series, this is a shorter and easier gamebook than most of the titles in Tin Man’s catalog. I actually managed to fumble my way through it on my very first try, which I assure you is a pretty rare case for me when it comes to gamebooks. In total, it took about an hour to make my way through the first time, but unlocking all of the achievements and art gave me a reason to go back a couple more times.

The basic outline of the game and its story has you going around to the various gates of the city to try to get the password you need to move on. There’s just one catch, however. The gatekeepers have sworn an oath that while the others live, none may tell their secret. Well, you can probably guess what needs to happen, but the order things happen in can actually change depending on what you choose to do and when. Not that it matters all that much, as the gatekeepers don’t have a whole ton of personality outside of the nasty piece of work at the east gate. During your travels, you’ll come afoul of some powerful elementals, and defeating them not only requires using the right spell but also having the correct item to cast that spell. Basically, you need to find a few items, find the gatekeepers, battle the elementals, and hope that everything turns out in the end. Not that we get much of an ending here, since there is a third book planned that we hopefully won’t have to wait another two years to play.

Rather than roll dice to fight enemies and pass tests, here it’s all about casting magic. You have a few spells you’ll be prompted to use when enemies come knocking, and a reasonable selection of other context-specific spells. Casting magic is elementary. No, I really mean that. Each spell has a number associated with it, and casting it involves adding or subtracting the number from the page number up in the corner. Apart from that, there are some puzzles where you have to input a certain word, name, or phrase, and others that require you to carefully examine an image for clues. All of this works just like it did in the last installment, of course, but for those who are yet to try out this series, you’ll likely find its puzzle focus to be quite refreshing, if not all that challenging. 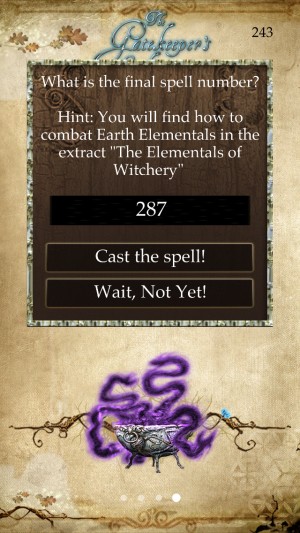 The writing has a nice stylistic tone to it, using a few bits of jargon to help establish that this is, in fact, a fantasy world, but otherwise sticking to detailed, evocative descriptions of the sights and sounds of the city and its residents. The overall plot feels a bit like filler, but it’s hard to judge a middle chapter without the conclusion in place, so I won’t hold it against the game too much at this point. Accompanying the flavorful text is an assortment of illustrations that appear at key points in the adventure. They match the tone of the writing quite well, with a somewhat dingy but never grotesque quality and plenty of fun details to pick up on.

For their part, Tin Man Games have done an excellent job adapting the book using their trusty gamebook engine. That said, it’s a bit cumbersome at times when you need to open up the spell book for reference. I actually had to jot some numbers down for the final puzzle because I couldn’t keep everything in my head for the length of time it took to close the book and get back to the prompt, but it’s nothing too bad. I did have an odd bug during one playthrough that threw me from one part of the story to another for no apparent reason, but it only happened once.

If you’re looking for lighter fare than the usual gamebook release, the Spellcaster series might be just the thing. I wouldn’t advise jumping in with this installment, since it very directly follows up on The Forgotten Spell, but if you enjoy that title, you’ll find this one to be just as satisfying. Gamebook veterans will probably find The Gatekeeper’s Oath to be a little too insubstantial and simple to really get into, however. It’s a pleasant enough read and the unusual puzzles are a nice change of pace, but it doesn’t quite offer the bang for the buck that you would get with many of Tin Man’s other efforts.