This week’s event in DeNA’s Final Fantasy: Record Keeper (Free) offers players the opportunity to recruit a character that’s probably near and dear to the hearts of most fans of the series. Yes, folks the beloved Aerith Gainsborough from Final Fantasy VII fame can be yours to do battle with if you partake in the ‘Sector 7 Countdown to Destruction’ event. The story backdrop has you assisting Aerith in making sure that Shinra doesn’t succeed in collapsing the Sector 7 plates, which would cause mass destruction to the folks living in the area. Of course, we all know that the story is just an excuse to partake in some battles, and as usual we have some tips to help you out in case you’re having some trouble with this event.

Unlike the first few events in FF: Record Keeper which had you advancing in a linear fashion through a plethora of battles in order to unlock items and new characters, Sector 7 Countdown is a Collector’s Event, which means you’ll be replaying the same battles in order to earn currency to cash in. In this situation, you’ll be battling for Magicite Shards which can be turned into Dr. Mog for a variety of items and, of course, the opportunity to unlock Aerith.

There are three difficulties of the ‘Plate Defense’ that you can participate in. As you might expect, the higher the difficulty, the more battles there are, the more stamina each battle costs, the harder each enemy is, and the more Magicite Shards available for reward. From a pure Magicite Shard per stamina standpoint, you do in fact earn the most stamina on the hardest difficulty, so if you have a team that can handle it, I highly suggest doing most of your grinding on that difficulty to make the most of your stamina. 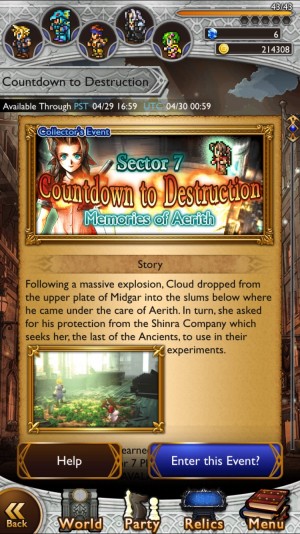 Aerith Is Easier To Collect Than You Think

After hearing how the Japanese version of this event went down, I wasn’t looking forward to having to grind endlessly just to earn Aerith. However, it appears that the event was significantly nerfed for its US debut. In fact, it’s incredibly easy to unlock Aerith. All you have to do is earn Mastery on both Easy and Normal difficulties (which can easily be done on a full stamina bar) and you should earn over 3000 Magicite Shards, which is the going price for Aerith. If you follow our general guideline of having a full team of 25+ characters, the above task should be incredibly easy for you to do.

If Possible, Play Through Each Difficulty At Least Once

Even if you have a powerhouse team and want to head straight to the Hard difficulty, I still recommend you play through each difficulty at least once. Why? Because you can earn two mythril (one for first time completion and one for mastery) for each of the first two difficulty levels. Considering how important mythril is in the game, it’s worth your team to run through the easier difficulties at least once so you can collect those.

You might be thinking about cutting lose once you pick up Aerith and using her to level up in Dailies or Story missions. Before you do that, I’d highly suggest spending a least a few more days grinding Magicite Shards because there’s a ton of cool things you can earn in this Collector’s Event beyond Aerith. You can easily trade for two Mythril, as well multiples of every single type and strength of orb, as well as some two-three star weapons, armor and accessories. I’d suggest picking up at least one of each accessory you don’t have and focus on the greater orbs of your choosing (it really depends on what sorts of spells you’re looking to create). I’d personally suggest going for the summoning orbs at the bare minimum as those are the hardest to earn in any other fashion currently. 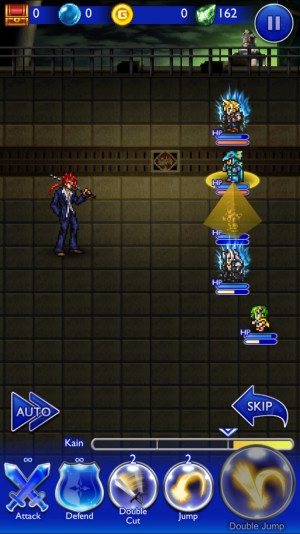 Enemy variety is very minimal within difficulties. In addition, there’s really not much in terms of strategy you can employ for Easy and Normal difficulty other than the fact that you should pack Lightning for the few enemies that are vulnerable to it. If you’re looking to strategize a bit for the Hard difficulty, the 1st Ray is vulnerable to Lightning, the Aero Combatant is vulnerable to Ice, while the Special Combatant absorbs poison and the Hedgehog Pie nullifies Lightning. Therefore, if you bring your strongest Ice and Lightning spells you should be in good shape.

In terms of boss battles, each difficulty ends with you fighting Reno. He doesn’t have any vulnerabilities and is strong against Lightning. He has a basic attack, a special move that can stop one target, a Pyramid attack that can imprison a character in a pyramid which pretty much acts as a stop. If one of your heroes gets stuck in a pyramid, you can direct one of your other characters to attack it. Do enough damage and it’ll eventually break, allowing you to use your character again. Otherwise, it’s just a matter of doing hard damage fast in order to stop him before he disables enough of your team. Obviously, one of the best ways to do this is to take in a team of highly leveled characters with a preference given to FF7 characters (for the synergy bonus).

Got any more tips? Feel free to leave them in the comments and stay tuned as we watch out for the next event and subsequent characters to unlock. Meanwhile, Aerith’s event will run through the rest of April so there’s plenty of time to get her.