Some of the earliest video game RPGs were roguelikes, but if you didn’t notice them around for a couple of decades, nobody would blame you. After being fairly popular in the early stages of home computing, they soon gave way to bigger, more persistent adventures. They still had a dedicated following during those years, with games like Nethack, Angband, and Japan’s Mystery Dungeon series carrying the torch for the genre. The boom of indie developers and the surging interest in more compact gaming experiences in the last ten years has seen the genre make a big comeback. The basic elements of the genre have been used in many popular games that might not be strictly considered roguelikes but owe a massive debt to the genre nonetheless. A genre once almost totally represented by so few games that you could count them off on your fingers now has a strong influence, especially in the PC and mobile gaming markets.

That has resulted in some very interesting and enjoyable variations on the theme. One that went over very well, and rightfully so, was 2012’s FTL ($9.99) from Subset Games, which rolled the basic spirit of a roguelike into a spaceship sim to create something entirely new. Among other games like Spelunky, Demon’s Souls, and The Binding Of Isaac, it showed that even if you weren’t making a strict roguelike game, there were still plenty of useful lessons to be learned from the genre’s structure. Crowntakers ($2.99), from Kasedo Games, presents another interesting twist on the formula, bringing in elements from strategy RPGs to give the game some extra texture. It proves to be a winning combination. 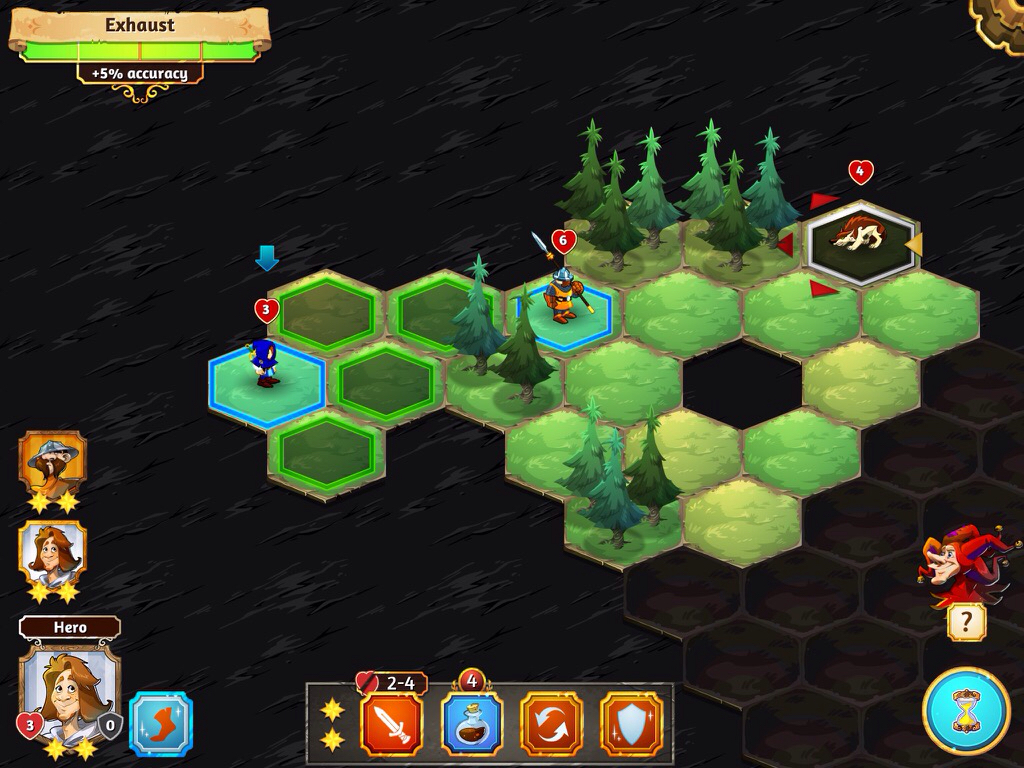 The king has been imprisoned by an evil duke, and his only hope is to reach out to one of his heirs in their dreams. Fortunately, he seems to have gotten around quite a bit in his time. You’ll play as one heir after another, trying to defeat the bad guys and set the king free before it’s too late. Every step you take on the map and action you perform will eat up a little time, and your enemies only get stronger the longer you wait around. You don’t have to go it alone, provided you have some coins in your purse. Each inn you find on your travels will offer up some mercenaries you can hire. You’ll also find plenty of items and equipment to aid you in your quest if you search around. Naturally, like any game drawing inspiration from the roguelike genre, death can come swiftly and randomly in Crowntakers. If your main character dies, your quest is over, so make use of all of your resources to make sure that doesn’t happen. You can’t take it with you, after all.

One interesting choice Crowntakers gives you relates to that point. The game offers two difficulty settings, and although death sends you back to the beginning of the game no matter what, the easy setting allows you a major leniency. Your main character and any of the mercenaries you’ve hired on will retain the levels they gained before, accumulating experience from game to game. This allows just about anyone to eventually grind their way through to the end, and while some purists might scoff at that, I think it’s a great option to include that greatly widens the game’s appeal. If you don’t care for that idea, you can still play on the harder difficulty setting. On that setting, death results in a truly clean slate, creating a very tough challenge that should satisfy veterans. 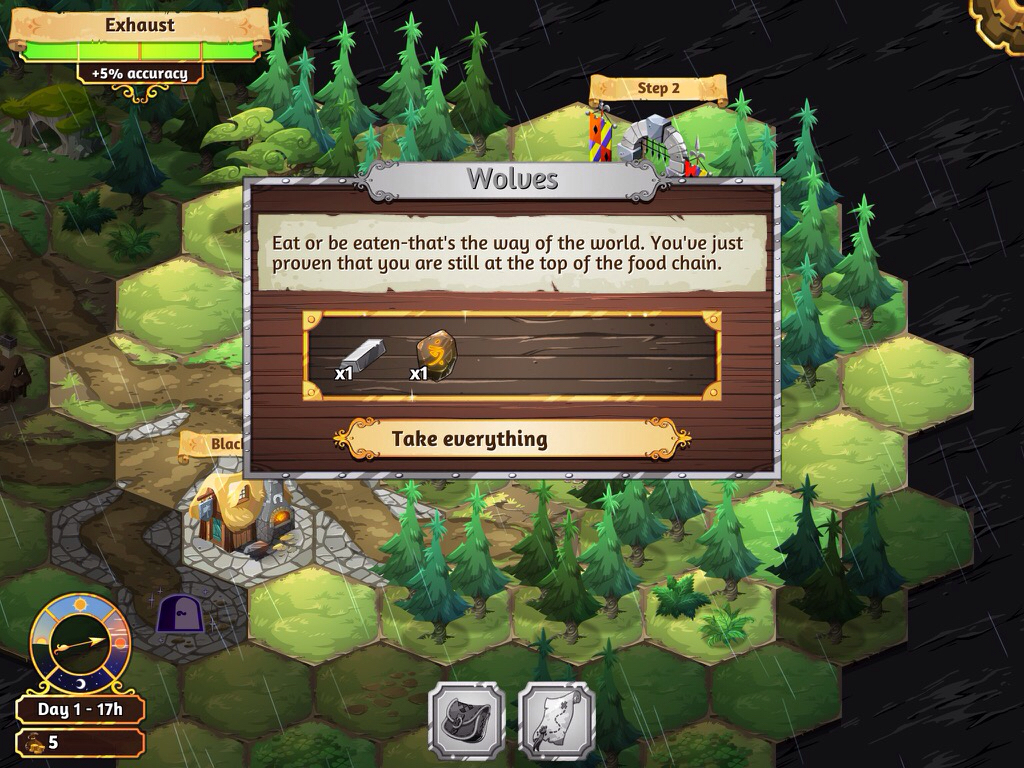 On either setting, the world is freshly generated each time you play, scattering locations, enemies, and events in random locations. The map works more like FTL than a classic roguelike if you scratch off the fantasy paint. You move from point to point, with each move costing time. Certain points will have places you can investigate, while others will result in a battle. Each map has an exit that moves you on to the next stage of your journey. You can count on certain places appearing on almost every map, including an inn of some sort and a blacksmith where you can improve your gear. You can choose to loiter around and build up your strength, but time makes your enemies stronger and risks the game giving you a bad ending, so you need to find a good balance.

None of that is unusual for a roguelike-inspired game, though. Where Crowntakers differentiates itself is in its battles. When you encounter an enemy on the map, you switch to a separate battle screen. There, your main character, any mercenaries you may have hired, and the enemies will be laid out on a small hex grid. The battles play out like a typical turn-based strategy game, with each character having different abilities at their disposal based on their job class. These mini-battles are actually fairly robust in their own right, including things like overwatch abilities and opportunity attacks based on positioning. Best of all, they’re scaled perfectly to fit the game. A game like Crowntakers would be a total drag if every single battle took as much time as those found in a typical strategy RPG, so I’m happy the game uses confined battlefields and small numbers to make sure things resolve quickly. 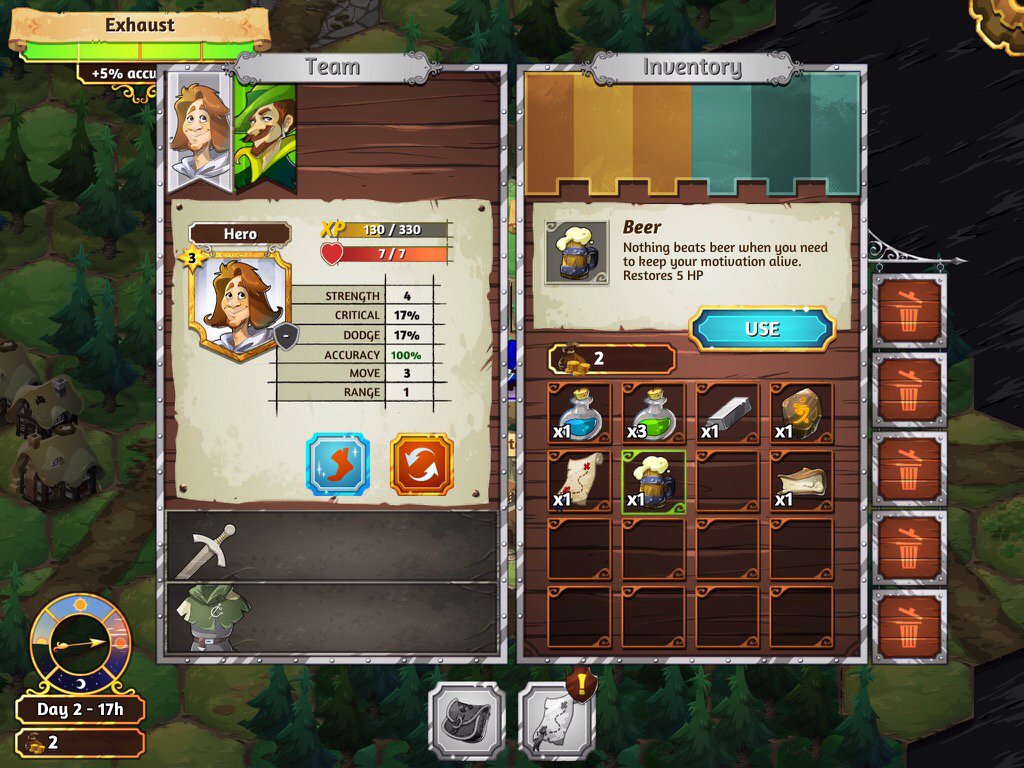 After each battle, your characters will earn experience points and if they level up, you can choose one of two perks. You’ll also get some items ranging from craft materials for upgrading your equipment to potions you can chug for a temporary boost in battle. Any lost HP remain lost unless you use an item to restore them, and mercenaries who fall in battle will also stay unconscious unless you revive them. Camping or staying at inns doesn’t restore lost health, but you will need to do it from time to time lest your team become exhausted. Well-rested characters get stat bonuses, while tired ones get penalties. These stat modifications can have a big effect on the outcome of battles, so you’ll want to make sure you’re reserving some time for a power nap here and there.

Crowntakers strikes a really good balance between simplicity and complexity. It has just as much pick up and play appeal as lighter roguelike fare while offering a bit more to chew on. The depth of the strategy isn’t nearly to the level of something like Hoplite ($2.99), but the game compensates for it by offering more breadth. I especially like how the way the difficulty settings work basically create two different kinds of games. The easy mode feels something like a Heroes Of Might & Magic kind of game, while the hard mode has a vibe closer to a typical roguelike. A few bugs find their way in now and then to spoil things, but the developer has been quite attentive so far, so I imagine the kinks will be worked out in time. I also feel like the game could work on the smaller screens of iPhones, so it’s a shame that its audience is limited to iPad owners.

Still, a strategy game being exclusive to iPad is hardly an unusual state of affairs. It’s a whole different world on that side of the App Store, but I think Crowntakers holds it own quite well with its unusual blend of elements from roguelikes, strategy games, and RPGs. Provided you enjoy any of those genres and don’t mind a little peanut butter from the others getting in your chocolate, you’ll probably have a good time with Crowntakers. It feels like this one is flying under the radar to the point where it almost passed me by. I’m very happy that I didn’t miss out on it, because it’s quite a charming little oddball.