The folks behind Vainglory (Free) have been on a roll lately with some a pretty consistent output in terms of new characters. This month saw the release of Vox, a fast-moving sniper with tons of maneuverability and damage dealing potential. He does have some intricacies that can be analyzed further so we thought we’d impart some general tips after a few days of checking him out.

Unlike Celeste’s general classification as a glass cannon, Vox isn’t quite as delicate. Sure, you’re not going to lead him into battle but he can take a few more hits before giving up the ghost. His increased durability is most likely related to the fact that his basic attacks and skills require him to be placed a little closer to the action than Celeste. Thankfully, Vox starts with some pretty decent speed, which increases substantially once you pick up some boots. Like Celeste, Vox gets a raw damage boost from crystal items for basic attacks so it’s recommended that most players focus on crystal items to boost both his basic attacks. However, crystal doesn’t really boost the damage of the abilities themselves (beyond Vox’s ultimate), so weapon-based items are potentially viable in certain builds. His attacks are also much faster than Celeste, which is an important consideration. 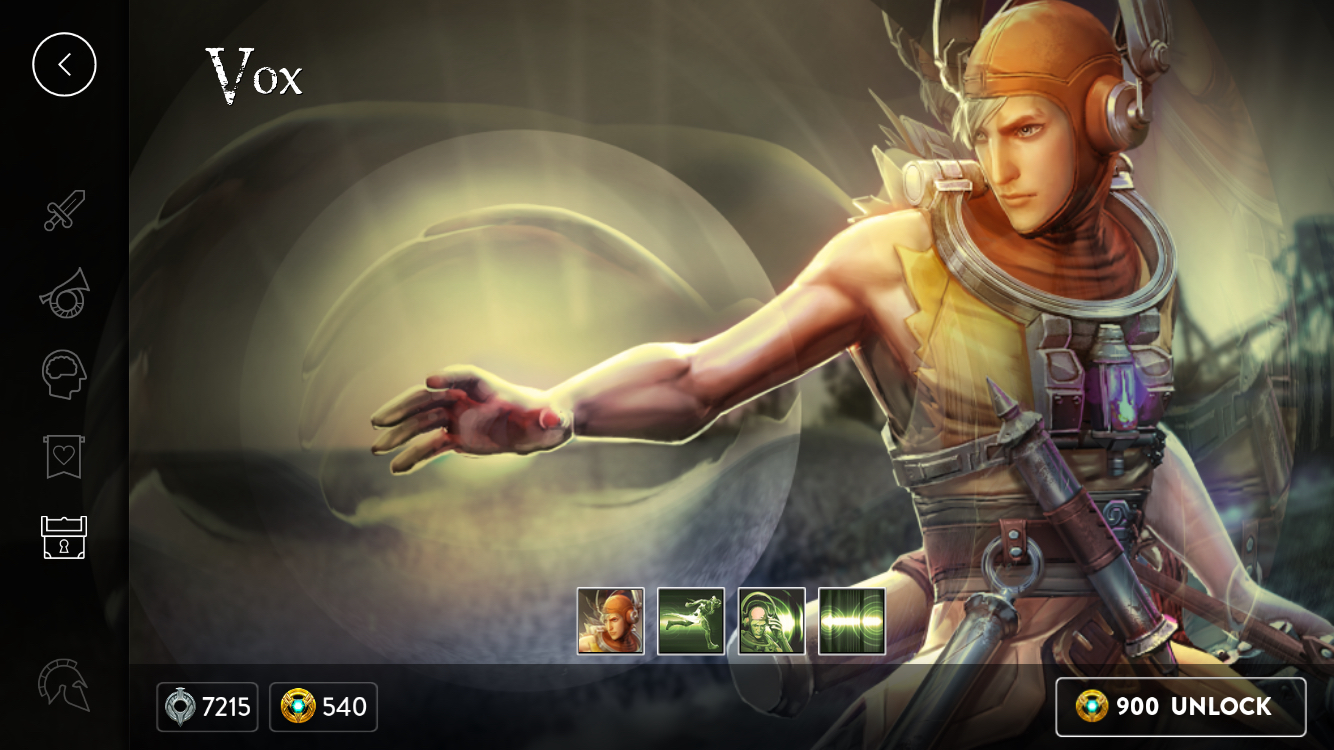 Before we get into the abilities themselves, let’s talk for a second about Vox’s Heroic Perk. Besides the aforementioned crystal damage boost, Julia’s Song also does two important things. First, basic attacks grant a small HP barrier which goes towards increasing his overall survivability. Second, when attacking enemies that have been hit with Resonance, basic attacks actually bounce to nearby enemies. These attacks also refresh Resonance and grant an additional HP barrier. Resonance is an affliction applied by using the rest of Vox’s abilities which allows basic attack damage to bounce to nearby enemies and also grant a further HP barrier.

In terms of abilities, Vox’s two are pretty different but very important in rounding out his repertoire. Sonic Zoom has Vox quickly dashing in the direction you tap, launching two projectiles that hone in on the closest target. Heroes get priority so if you use Sonic Zoom within range of an enemy it’ll do some decent damage against them. Sonic Zoom’s dash doesn’t cover too much distance but it’s useful in a pinch for trying to get out of trouble while doing a little bit of damage. It’s also useful to get into the fray, but I’d recommend not using it in that fashion as you’ll probably be out of range of any heroes when you use it (meaning that you’ll waste the projectiles). If used right, it’s also pretty awesome for chasing down enemies on the run, especially if you can time the Zoom for launching projectiles *and* getting you closer to use your basic attack.

Pulse is Vox’s second ability and has a few cool elements surround it. First, it’s a radial spell that originates from Vox which slows enemies for a couple of seconds. The severity of the slow is based on how close the enemy is to the radial zone. Thus, if an enemy is right next to Vox when Pulse goes off, they are affected more than someone at the edge of the radial effect. The second effect is the application of Resonance to all enemies that fall within the radial effect, which, as we stated earlier, allows Vox’s basic attack to bounce, causing additional damage to other nearby baddies. 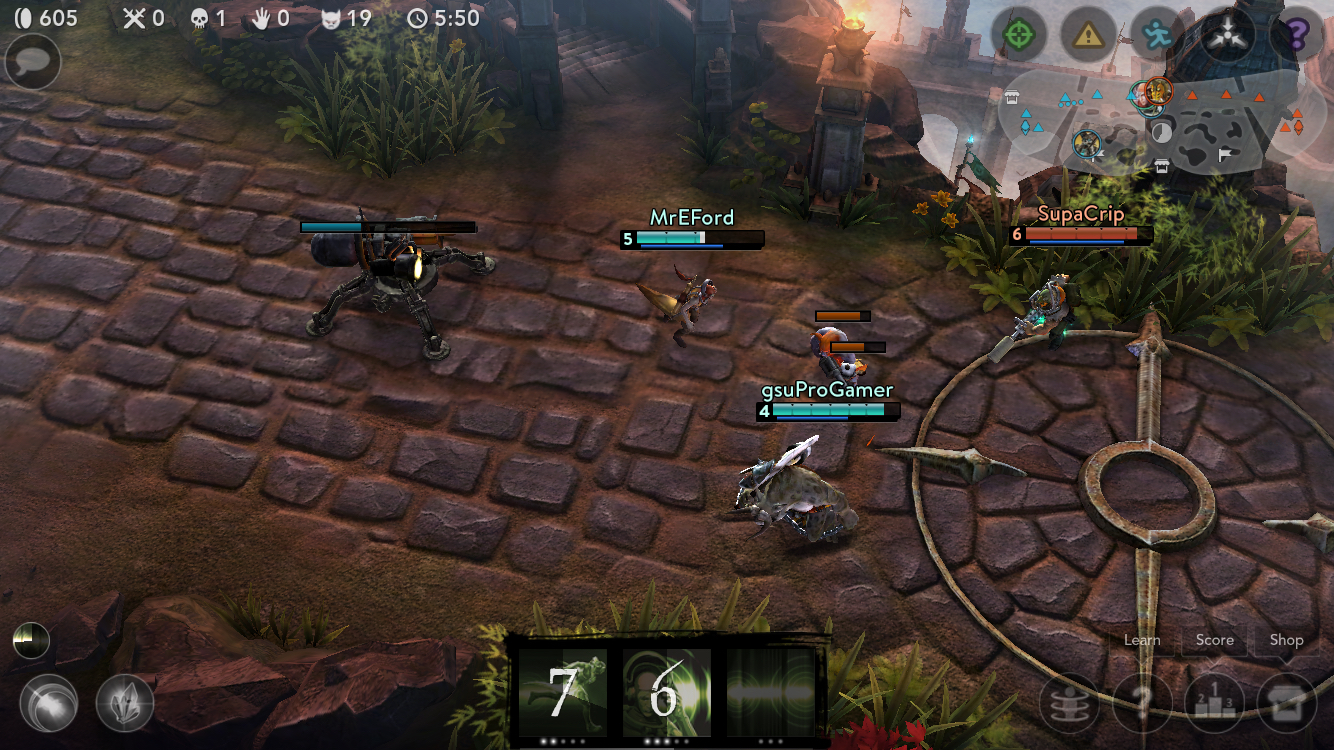 Vox’s ultimate ability, called Wait For It…, is also a two-phase attack. First, Vox fires an ultrasonic wave in the direction tapped that applies Resonance to all enemies in its path (or refreshes Resonance if they already had it). A second later, a wide shockwave explodes along the path and deals crystal damage that can be improved with crystal power. The shockwave also does a second and a half of silence, preventing enemies from using abilities. If you happen to strike enemy heroes with the shockwave, Resonance will also bounce to any other enemies nearby. Vox’s ultimate can be tough to aim, tougher to predict for the shockwave, but pays off marvelously if used correctly. Obviously if you land the shockwave you will do some excellent damage, but if you can get Resonance correctly applied, you can also deal even more damage afterwards with basic attacks. It’s also not a bad move to take down retreating enemies that are weak, but timing is essential in order to make it count.

So how should the average person play Vox? Well, first thing you should do is go for the crystal power items. Sure, only Wait For It has a Crystal Ratio % attached to it, but you aren’t going crystal for strengthening your ability powers – you’re doing it to increase Vox’s basic attack. In order to make the most out of his attack, you’re going to want to apply Resonance on as many enemies as possible and keep it up by taking advantage of Julia’s Song. Vox versus a group of Resonance mobs is a frightening prospect as Resonance not only increases damage but applies that damage across all the enemies nearby. Basically, start Vox in the lane and you’ll make a killing in gold.

Meanwhile, both Sonic Zoom and Pulse are on short cooldowns, so you’ll want to keep them applied as much as possible. I personally like to max out Pulse for the decreased cooldown and added Resonance Damage bonus, but if you’re comfortable with using Sonic Zoom it might be worth it to max that out for the Resonance application on the first hit. Regardless, a good tactic is to wait for your tank to engage, Sonic Zoom in, apply Pulse, and then use your basic attack as much as possible on Resonance-afflicted enemies. Keep applying Pulse when needed as well as Sonic Zoom and then dash out when you get low on health. Because of his speed, Vox also works well in chasing down weak heroes as long as you don’t get ganked. Finally, use Wait For It against clustered enemy heroes, you’ll do tons of damage, apply lots of Resonance and put you in a great position to cause lots of damage afterwards. 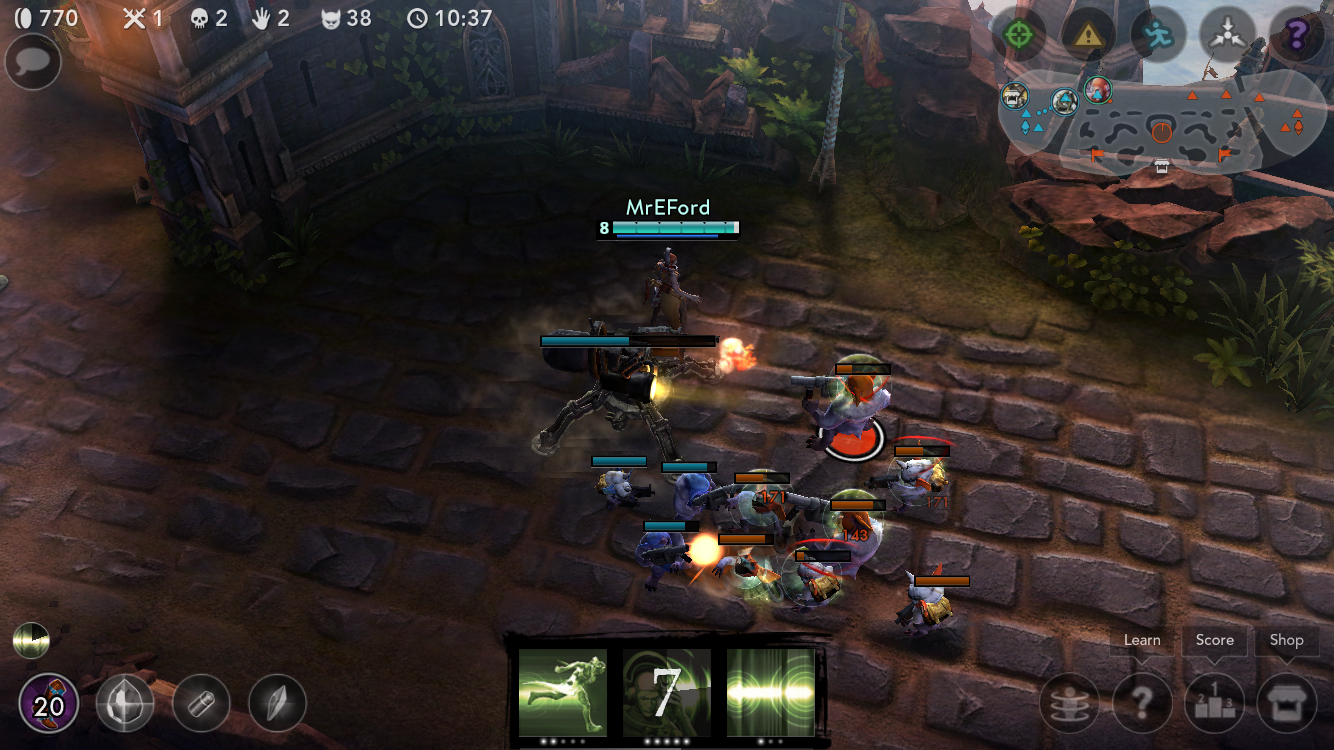 Super Evil Megacorp is doing an excellent job with launching new heroes with pretty unique elements and Vox is no exception. Resonance really changes the potential meta-game and Vox is balanced well in terms of damage potential versus longevity. If you’re interested in checking out Vox, he’s available for purchase with ICE or Glory and will most likely be in a free rotation in a month or so. Meanwhile, stick with us as we continue to report on the latest Vainglory news.