One of the coolest aspects of Final Fantasy: Record Keeper (Free) is the ability to eventually unlock and battle with a large variety of different characters. While the Japanese version has a myriad of heroes to choose from already, the recently released English version debuted with a limited amount of unlock able warriors. Well, with today’s new event, the folks at DeNA have started to slowly introduce new participants to the battle, starting with Tifa and a “secret” character that can be earned by completing the entirety of the event.

The event itself takes place in Final Fantasy VII and centers around the gang’s rescue of Aerith in the Shinra building. Every battle will simulate a floor or two of climbing the building and will contain anywhere between 3-4 rounds of enemies. Enemies are accurate (at least from a sprite standpoint) portrayal of the enemies found in the Shinra building in Final Fantasy VII, with corresponding strengths and weaknesses. In addition, every few sets of floors will contain a boss along with a corresponding difficulty spike. Getting halfway through the event unlocks Tifa Lockhart while completing the entire Shinra building unlocks a secret-but-oh-so-identifiable character for play. 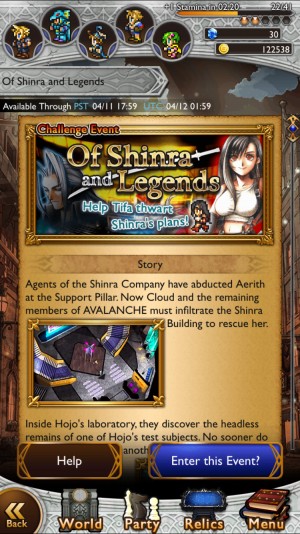 In addition to unlocking the two new characters, there’s a ton of potentially useful equipment and orbs (as well as mythril) that can also be earned while playing through all the battles. Of particular note are the summoning orb drops, which will allow Rydia to finally learn summoning skills, as well as a good amount of growth eggs that can be immediate applied to those new characters.

With the above in mind, here are a few tips for getting through the very lengthy Shinra tower:

Make Sure Your Heroes Are Around Level 30

As Shaun stated in his guide, try to have a party leveled up to 30 in order to fully complete the event. If you have a decent collection of fully leveled 3-5 star weapons and armor, you can probably get by with a party with an average level of 25 (I managed to get by at around 27-28 with some decked out equipment) but otherwise I’d echo Shaun’s sentiment and reiterate that a level 30 party is a safe bet. Also, keep in mind this recommendation is for you completing the entire event; early battles are going to be incredibly easy but the difficulty kicks up several notches as you get towards the end. Relatedly, I probably would hold off on putting Tifa on your party until you’ve completely beaten the event as she will be significantly under leveled (even with the growth eggs) for the second half of the event.

Plan Out Your Stamina Accordingly

If you want to earn both characters in a short amount of time without replenishing your stamina, you’re going to have to keep a close eye on the timers and take on battles as you have the stamina to do them. There are dozens of battles you’ll have to go through and the stamina requirements range from 3 stamina per battle at the beginning to 10 and 11 stamina per battle near the end. Considering most folks will only have 40-41 stamina at this point, later battles will easily deplete your stamina and make the waiting start faster (again, unless you use gems or methyl to replenish). Considering this is a timed event (which expires on the 11th), I’d recommend folks start playing sooner rather than later in order to make sure they have time to fully complete it. 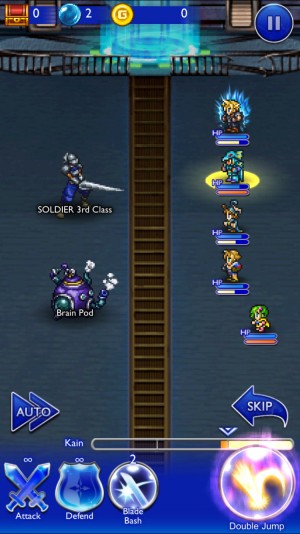 Towards the end of the event (specifically Shinra Building Floors 56-60), Final Fantasy: Record Keeper gets really nasty by throwing at you the Hundred Gunner, a boss that can’t be taken down with melee weapons. For the majority of folks, that means you’re basically out of luck if you don’t come prepared. For this specific round of battles, make sure you have a several bouts of Thunder and preferably Thundara ready to go (as well as equip as many ranged items as you can). Thankfully, at this point the event has been throwing at you plenty of Lesser Black Orbs and Lesser Lightning Orbs so you should be able to make and hone enough abilities for folks to equip.

If you still need more help, get the Light Rod by doing the second elite mission in the FF IV archive, upgrade it significantly and equip it on Rydia with honed up Thundara and it should be a cinch. The same tactics should be employed for the next boss as well (which can be found in Shinra Building Floors 61-65)l. These are by far the toughest battles in the event but with adequate preparation you should be able to succeed.

Heed the Advice In Our Overall Guide

We lay out a lot of good foundational tips that will serve you well in this event. Make sure you have a fully powered-up Cloud as his synergy bonus will be important. Similarly, if you have any FF7 weapons or armor you may want to equip them. Also make sure you have at least one healer and abilities that cover most of the elements for those bosses (Thundara and/or Thunder Strike will be very useful). Finally, if you get to a section of the event that feels overpowering, keep in mind that you can return to a set of floors at any time, meaning you can go out and play some Archives and daily dungeons in order to get stronger.

Hopefully Final Fantasy: Record Keeper keeps releasing content at a steady pace. In any case, I’m a fan of how it’s going to work out if this first event is any indication. Meanwhile, the event runs through April 11th so I highly suggest that folks interesting in completing the entire thing start soon. Also, stay tuned as we keep you posted on future events and character unlocks.