Fast & Furious: Legacy (Free) is a game that I only played because I wanted to review it. Now that may sound dumb, and perhaps a little unfair to the developers, but allow me to explain: I love the movies. I love cars, I love driving games, and this one is an action-packed racer with some of the most gorgeous graphics I’ve ever seen on mobile. If the developers would stick a price tag on it then they’d have themselves an instabuy. But it’s free-to-play, and that’s a big no-no for me.

I’m not interested in waiting for timers, paying for coins and gems, and inevitably having the game try to slip its grubby fingers in to my wallet. I don’t want a game that is intrinsically designed around being too hard to beat with skill alone. Here’s my message to developers: You make a good game and I’ll buy it. That’s the deal. 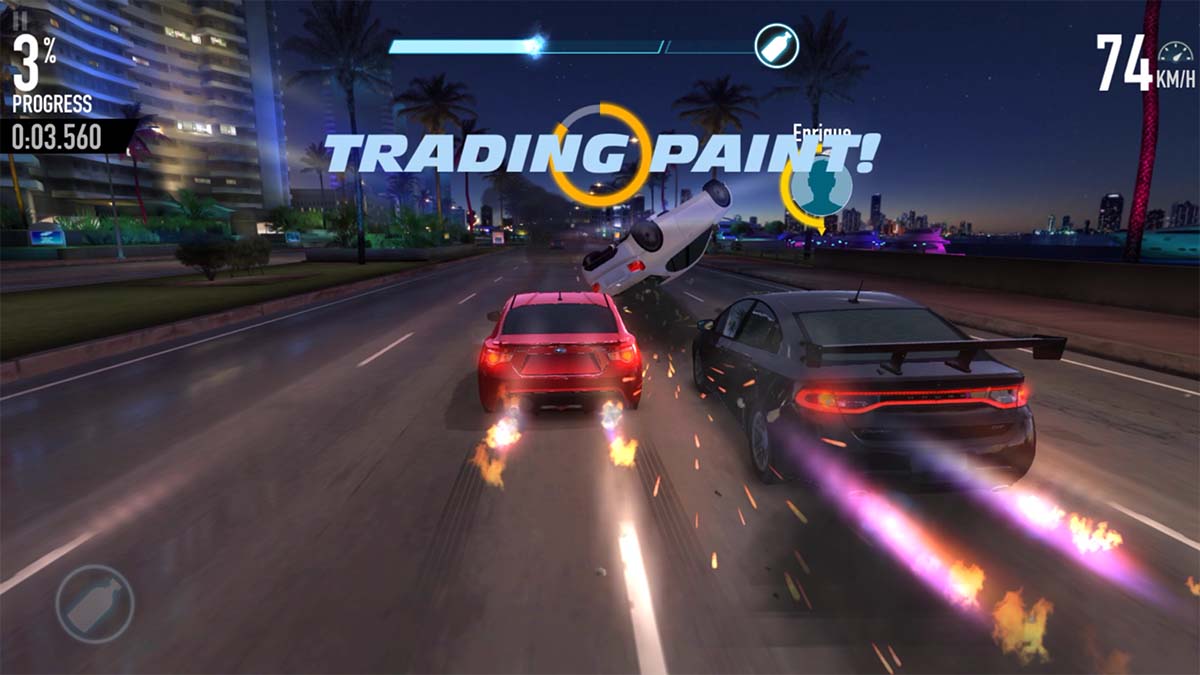 So why review a free-to-play game? Well, simply because there are lots of people who, like me, refuse to play them. So I thought I’d take one for the team, dip my toe in the IAP-infested water and see if it’s worth trying to swim.

Fast & Furious: Legacy has a loose storyline, structured around a series of races against characters from the films. You start with drag races in Miami, progress to drift races in Tokyo, then back to more drag races in Miami and on to Rio. I played to the 4th chapter and the races were all very short and repetitive, with every race in Miami going along the same couple of miles of shore road, every race in Tokyo going around the same multi-storey car park, with some variance of route. Give me long city-wide races any day.

There are no tilt controls or on-screen buttons for steering. Instead you’re locked in lane, and you tap the left or right of the screen to change lane. I couldn’t say if this control mechanic has been done before, but it’s the first time I’ve encountered it, and I’d like to see it become standard in mobile racers. Gaming time for me is often about multitasking, and I don’t want to be using my phone like a steering wheel when I’m out walking the dog. Drifting, too, is handled perfectly, with you sliding your finger across the screen to control the drift angle and keep the nose of your car on the guide arrows. 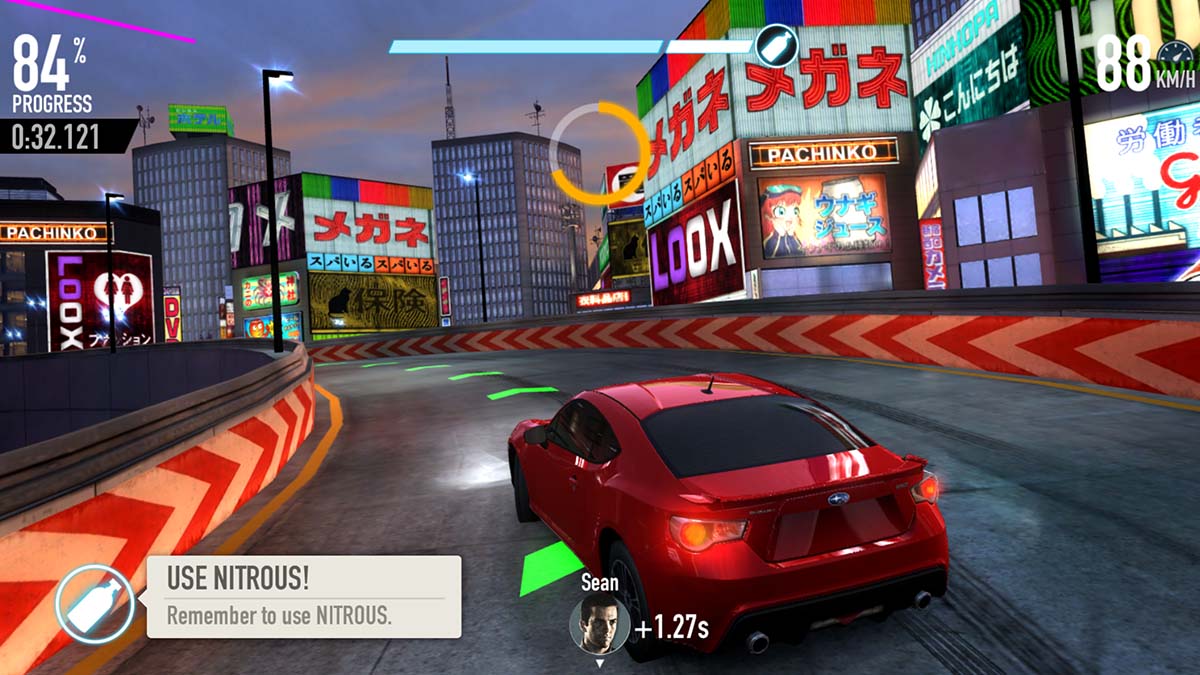 During some races you’ll attract police attention, but you don’t need to worry about outrunning them, just swerve to avoid the ones ahead of you as they try to block the road.

Winning drag races usually comes down to the first couple of seconds. If you can get a perfect start and then either nudge your opponent to the side or get cleanly in front of him, chances are you’re going to win. A lot of the fun comes from trading paint, forcing your opponent to crash in to other cars, pushing him off the road, etc.

There’s a great sense of speed, with civilian cars and the beautifully-rendered cities whizzing past at a terrific rate. There is even some originality in the jumps you can go over, which I won’t spoil by describing them, but they’re much better than the usual car transporters and construction ramps. 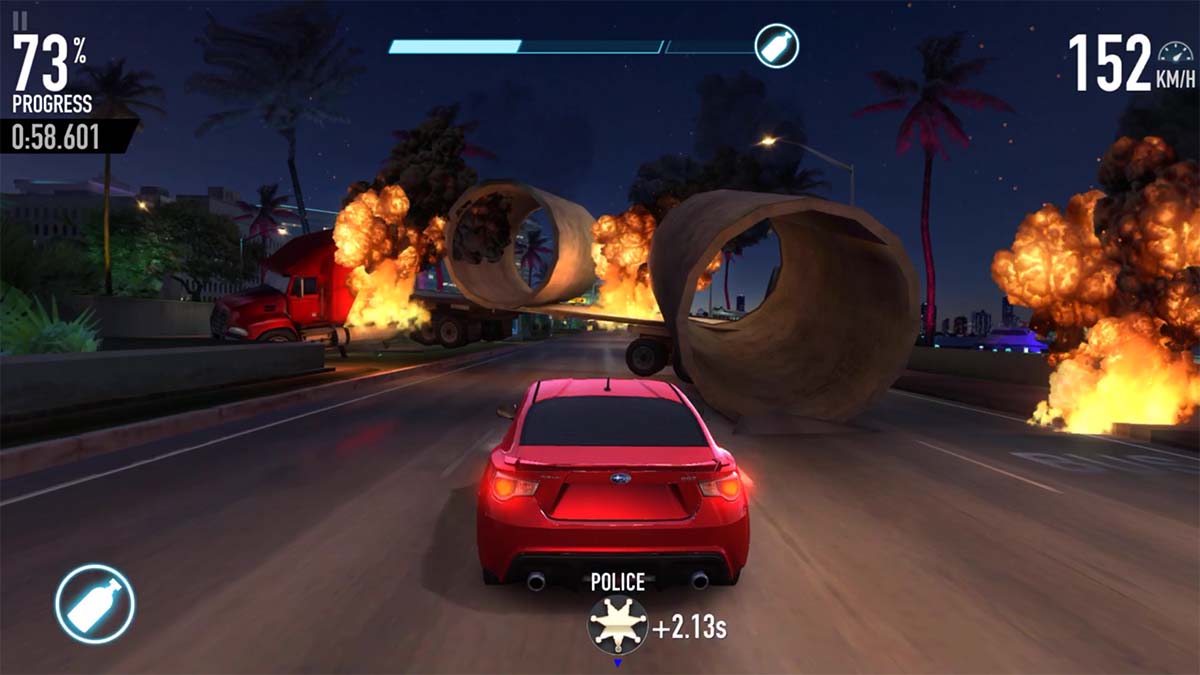 The music is suitably high-energy and pumping, albeit the same track over and over again, but at least it’s a good one. Sound effects are less spectacular, with high-pitched engine noises that quickly become grating, like trying to play in a dentist’s surgery. I know that high-performance cars can be quite pitchy in real life, but it’s not something I want to hear in a video game. There’s even a regular bug that causes your car’s engine noise to continue grinding away on the end-of-race screen, and it’s just plain obnoxious.

You can form crews with other players, but you don’t race together. Depending on how well you do in your own races, you can help your buddies by speeding up their car repairs, but that’s about it.

Overall, this is very close to being the perfect mobile racer, thanks largely to the simple controls. The only thing it’s really crying out for is longer courses and nicer engine sounds.

So how about those in-app purchases?

The short answer is that I’ve had a good few hours of entertainment from Fast & Furious: Legacy without any need to spend real world money, and it looks like my credit card is safe for a while longer. There was one point very early on — during the tutorial in fact — when the game was quite aggressive about trying to sell me a car, to the extent that it wouldn’t even let me continue playing unless I went in to the store to review the deal. But so far that has been a one-off.

Each race has a minimum entry requirement, and if your car’s performance index is too low then you have to upgrade before you can take part. This is one of the key choke points where the game will surely be asking for money at some point, but so far I’ve been able to upgrade using only currency earned from racing.

Either by bug or design, the minimum performance rule only applies to you, not your opponent. See the screenshot below, with the entry requirement shown as an inset. My opponent was clearly 5 points too low. 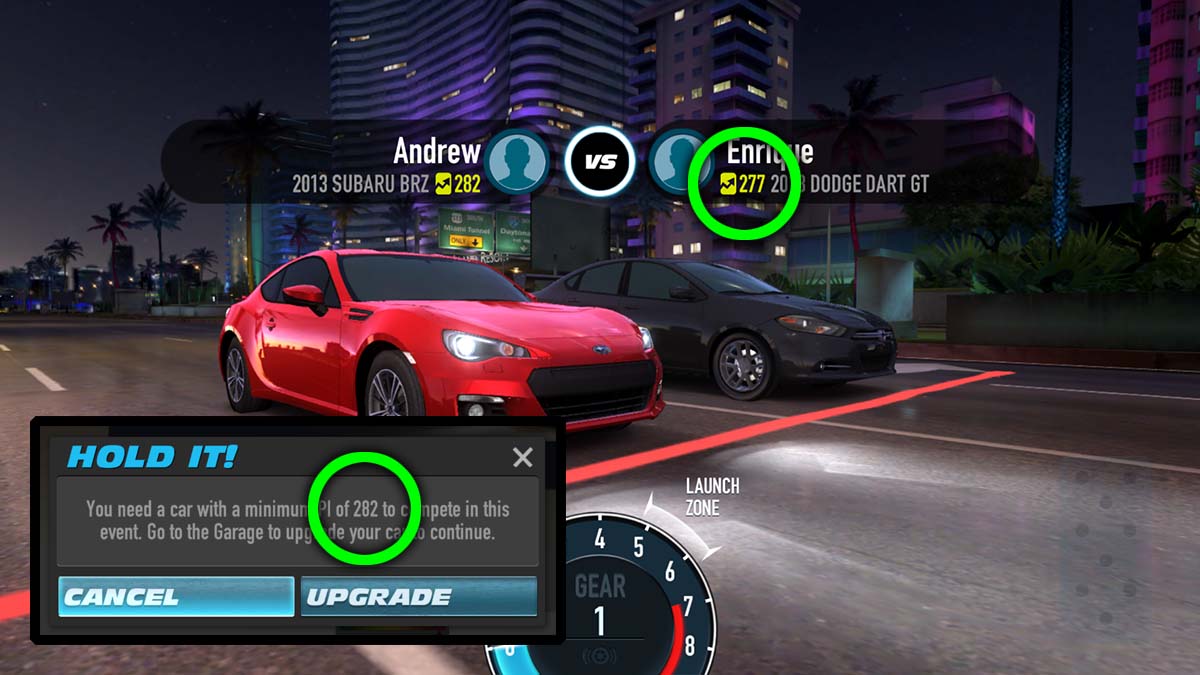 After a few races you need an oil change, which has a 2-hour timer. You can accelerate the timer with speed-up cards, with you receive as occasional bonuses, or you can buy them if you’ve run out. Crew members can also help speed up the timer.

I’ve had fun playing Fast & Furious: Legacy. But I’d still prefer to pay a premium price and know that the whole game is there for me to explore and enjoy, without the spectre of IAPs floating around on the indeterminate horizon. No doubt, it spoils the game, knowing that I’m only going to be able to play so far before the carefully-structured difficulty curve ramps up and I have no choice but to pay or stop playing.

And make no mistake, I won’t pay for in-game currency. I see it as a bottomless pit. Right now, I don’t know if I’ll get another 5 or 50 races before I run out of cash. Suppose my free ride runs out tomorrow and I decide to sink $4 in to the game for some currency. Maybe that will last a week, or maybe it will last a day, who knows? And what if I want to play through the game again some day? No, like many others who would happily pay a premium price, I’m fixed in my belief that paying for in-game currency is out of the question. Playing and enjoying this game has done nothing to change that.

What we’ve got here is a well-designed, beautiful game with great controls. I heartily recommend it. If you’re happy with the IAPs then go crazy, knock yourself out. If, like me, you’re not willing to pay then congratulations, you’ve got a really fun game for free, but your experience is going to be hampered by the pervasive threat of a paywall lurking somewhere around the next corner.