Now that the folks at Super Evil Megacorp recently unveiled their next hero to its mobile MOBA, Vainglory , we thought we’d take the time to give folks a closer look at the last hero to debut for the game, Celeste. We’ve been playing (and thankfully, mostly winning) matches with her for quite awhile now and thought we’d lay down some general tips on how to best utilize her.

Simply put, Celeste is a pretty impressive glass cannon in every sense of the term. She starts off slow, has little HP, and has a relatively slow attack speed. However, what she lacks in those qualities, she makes up for in raw damage potential. Every ability she has, including her basic attack is powered by crystal. That last part means that every item purchased provides double duty in increasing not only the power of her abilities but also her basic attack. This also means that, for all intents, items that bestow attack power are a waste on her. In addition to Celeste’s basic attack being powered by crystal, it also reveals enemy heroes for a second and a half regardless of their position (the reveal happens when the attack hits). Considering the slow trajectory of her regular attacks, the reveal perk can be pretty useful. 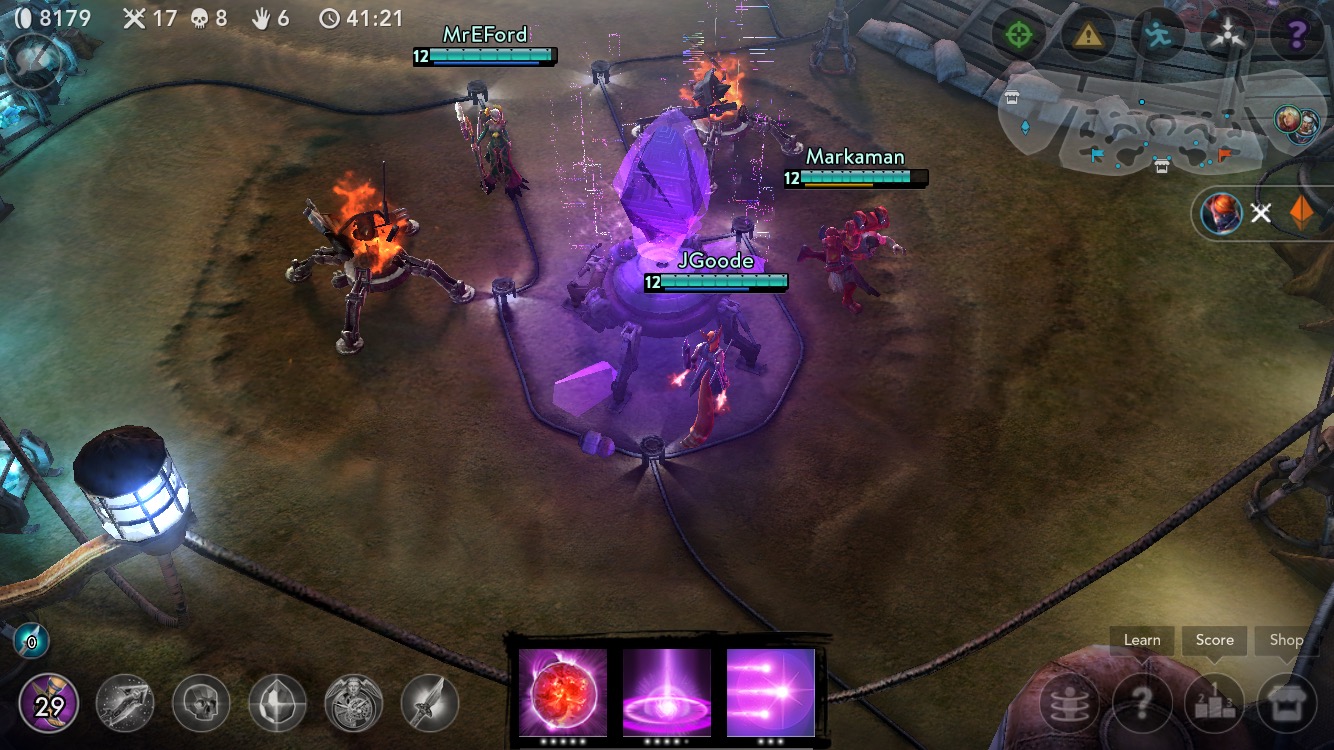 Of course, Vainglory isn’t going to simply hand over a glass cannon like Celeste without strings attached. That would make victory a little too certain. Instead, each of Celeste’s abilities require a certain amount of timing and prediction in order for would-be players to succeed.

Heliogenesis is a small AoE attack that deals damage approximately a half second after it’s placed. After it’s launched, a star is left on the battlefield for a few seconds. Use the ability again on that lingering star and it goes supernova, dealing even more damage in a larger area of effect. Each level put into the ability significantly reduces it’s cooldown, with its ultimate extending its range. I personally love maxing out Heliogensis and use it to take pot shots at enemies going towards my tanks and melee DPS allies. The range increase also increases the possibility of using the initial and supernovas to lead enemies with the potential for awesome damage.

Core Collapse is classic crowd control with a twist. Celeste launches an AoE attack at the point of selection that causes damage and a stun a second or two after it’s placed. The twist lies in the time delay as it creates a visual effect so it allows enemies a brief opportunity to get away. Of course, you can use this to your advantage to try and steer enemies to a different direction if you know that they will be on the lookout for Core Collapse. Conversely, you can also use it in the middle of a big fire fight and hope the opposition is too distracted to see the visual cues. It’s also very easy to time in conjunction with another stun, leading to some interesting results. 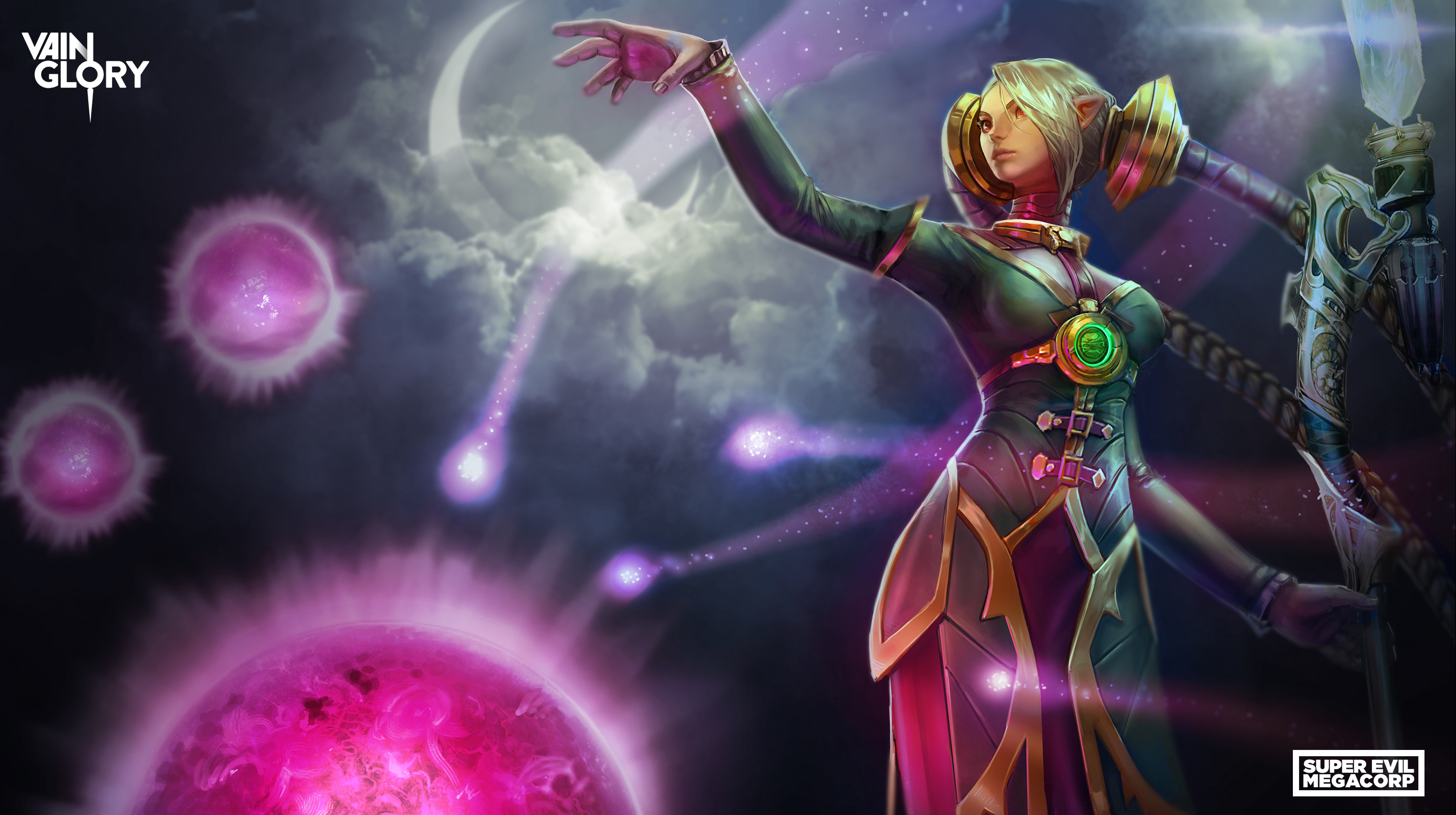 Celeste’s ultimate, Solar Storm, also requires a decent amount of timing. It’s launched by tapping on any direction of the screen. Celeste will then take a second to power-up and then launch a vertical storm of stars in the direction tapped. The lead star in the middle of the storm will pass through every enemy it hits and deals full damage. The trailing stars do area damage to the first enemy or hero it hits and then dissipates. It’s important to note that Solar Star does 50% damage to non-heroes and does no damage to towers or the core. Her ultimate should be saved and used against multiple heroes and works well in doing damage in the middle of a big battle as well as chasing escaping opponents. My main suggestion would be to try and do it away from jungle or lane mobs and try to time and aim it towards heroes only. Smart heroes will try and bait you to use it near towers, so please avoid that.

Item-wise, I rather enjoy the recommendations that Vainglory serve you within the shop, and I’d advocate that novice Celeste players follow them to begin with. The most important things you’re looking for are crystal damage in any shape as well as some early boots to increase your speed (which can offer some slight respite for your weak defense and HP). Obviously, I’d avoid any item that focuses on attack vice crystal and I don’t think it’s worth pursuing shield or HP only equipment as it’s not really going to help you out in regards to staying power if you’re ganked. 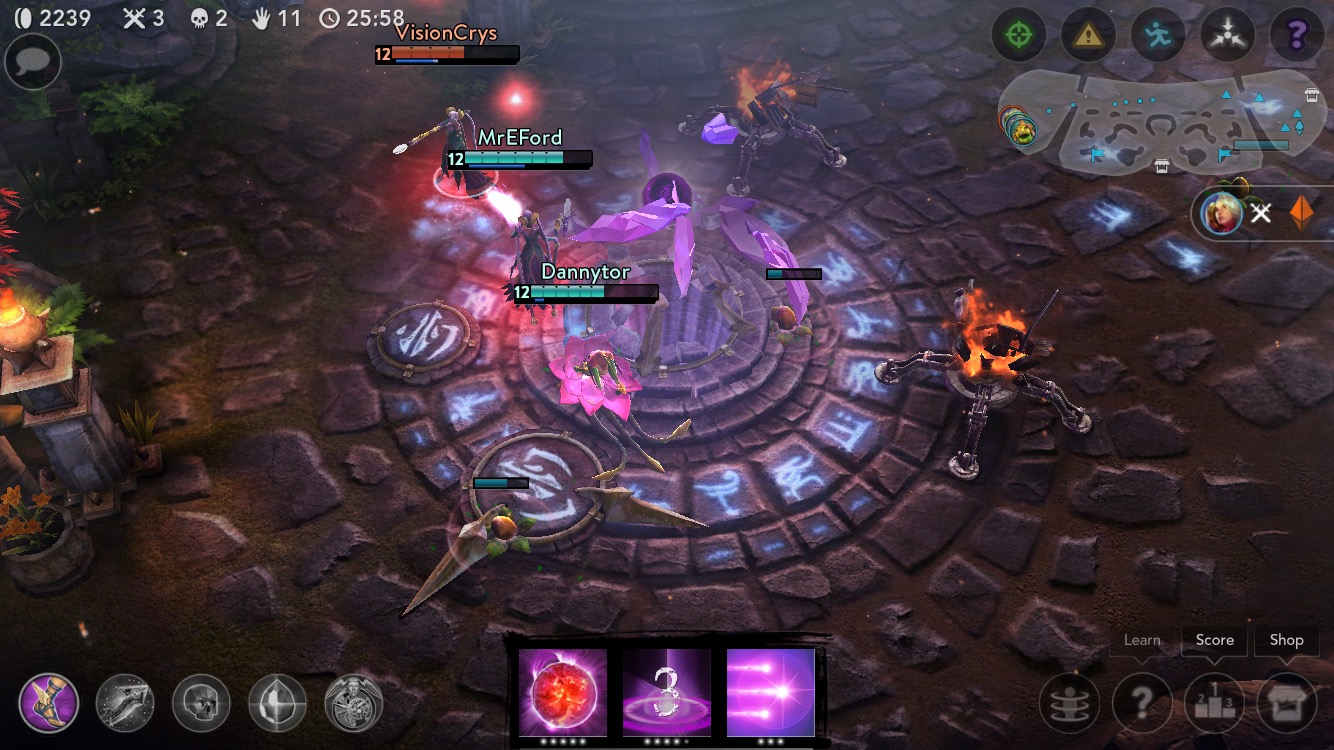 The main question that should be asked is what *kind* of crystal items you should be looking for. Frostburn is one of the first items recommended, and I’d advocate for it as well as the slowdown is pretty helpful to keep enemies in range of your abilities and basic attacks. I’d also recommend Clockwork to make Heliogenesis have an even faster cooldown and Shatterglass for some raw crystal damage upgrades. Late game, I’m a fan of Alternating Current considering how much crystal you should have by that point and you can try your hand at Broken Myth or Piercing Shard depending on your enemies.

So now that you have an idea of how Celeste plays and what items to get, how should you approach a battle? Start her in the lane, and play conservatively for the first few levels. Supernova heliogensis abilities should allow you to build some decent gold up front. Once you get your ultimate and have some boots, start playing a bit more aggressive in the lane while keeping an eye on your allies in the jungle. Never initiate a battle, but you should be there to finish one. I play Celeste similarly to SAW in that sense that I try to sneak into a battle while folks aren’t paying attention and try and shake things up. If you’re being chased, use Core Collapse to try and deter them while mixing in heliogenesis if you can to do some damage. Finally, save Solar Storm for the big battles if you can or if you know you can take out a hero with a good shot. Most importantly, practice aiming and leading all abilities as the difference between a good Celeste and a great Celeste is landing each ability most effectively.

Alas, Celeste isn’t available as a free-to-play hero currently, but if the past is any indication she should make it into a rotation relatively soon. Meanwhile, if you have the glory or ICE, I highly suggest picking her up as she’s a great ranged DPS character that should be mastered by those capable. Meanwhile, stick with us as we look towards the release of the next hero on Vainglory.