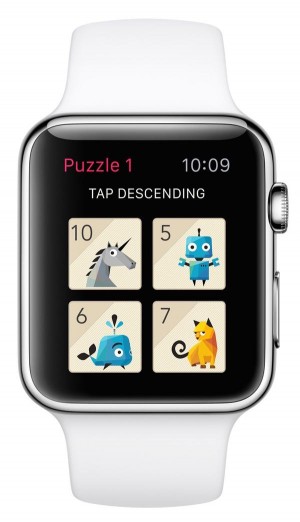 We’ve been watching AppShopper like a hawk as Apple Watch updates have been rolling out over the last day or so. MacRumors has a full list of all the interesting apps they’ve seen so far, but on the games front, there really hasn’t been that much. …Until this morning when Rules! ($2.99) had an update approved adding Apple Watch support.

I’m glad a game like Rules! snagged the title as first Apple Watch game, as per our review, it’s pretty great:

Rules! [$2.99] has a very simple premise that you could probably make a good stab at just by reading the title. You’re presented with a board with 16 cards on it. The cards are numbered from one to ten, and each number has a picture associated with it. The game starts easily enough, asking you to tap the cards in descending order to remove them within a certain time limit. This is easy, of course, and the time limit is quite generous. After finishing the job, you’re presented with the next rule, which is to remove cards with a green picture on them. After that, you’ll have to remove cards according to the first rule to finish off the stage. The game keeps stacking rules on top and won’t remind you during play what that rule actually was, so you have to keep them all sorted in your head. If you can clear ten boards without running out of time, you’ll start another set with fresh rules and new cards added into the mix. You simply play until you run out of time, seeing how far you can get. …Read More

Anyway, yeah, if you don’t already have Rules! and are looking for an all around fun game, it’s worth picking up anyway. If you’re hyped for your new Apple Watch, it’s pretty awesome that the first game that got approved also happens to be a good one.