New Hearthstone (Free) spoilers emerged from the depths of Blackrock Mountain yesterday as Blizzard pulled a Khaleesi and unleashed three dragon-themed card spoilers from the upcoming adventure (hard to believe Blizzard hasn’t planned its dragons release to coincide with the Game of Thrones’ Dragons coming to HBO a mere ten days after Blackrock’s release). 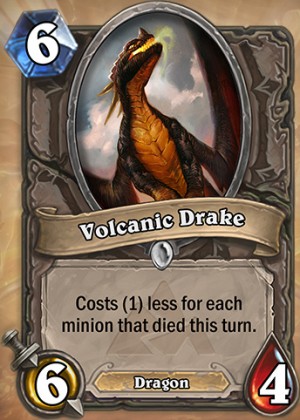 First up is Volcanic Drake, a 6 cost 6/4 common neutral minion with relatively good stats for his cost but more on the fragile side with 4 health.

This card could work great in decks with good AOE cards, but it will really depend on your draws. If you can trigger his ability and play him early, Volcanic Drake will be a pretty good card.

Following close by for protection is Drakonid Crusher, a 6 cost 6/6 common neutral minion. Crusher is an interesting card that’s seems to be lodged in limbo between Agro and Midrange decks.

If you’ve been bashing your opponent quite a bit, you can drop a 9/9 and make his demise speedier. 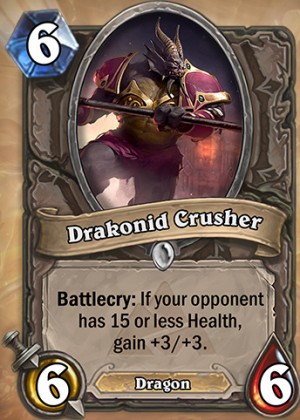 However, if you haven’t wrapped things up by turn 6 with an aggro deck, you might be in trouble and Drakonid Crusher might not be able to turn the game in your favor.

In a midrange deck he might fare better, but then if you turn him into a 9/9, you’ll be probably getting a visit from Big Game Hunter (BGH). So, in the right situation where no BGHs are around and you’ve kicked your opponent around a bit, Crusher could help you end the game quicker. But I’m not totally convinced by him, at least not yet.

Finally, rising high over the other two cards is the big guy of this reveal, Nefarian the Legendary Dragon, a 9 cost 8/8 card with a fun RNG Battlecry. And I say “fun" because this card might be more fun than useful. You might be stealing your opponent class’ spells, but they could be completely useless for you. Add to that how late in the game you’ll probably drop Nefarian and how vulnerable this little bird is to BGH, and I’m not sure how much play this legendary will see.

One fun thematic aspect of this card is that in WOW, Nefarian could steal a player’s skill and bash him on the head with it, making this legendary’s Battlecry a fun reference to Blizzard’s other juggernaut. 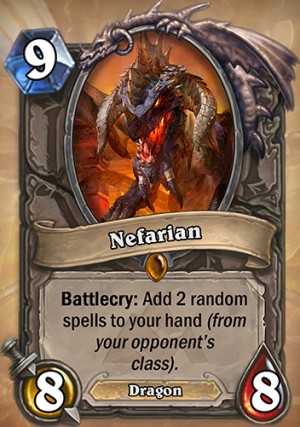 Of course, all of the above might end up being way off since we haven’t seen all the dragon cards yet, so there may be more synergies to come that might up the value of Dragon-themed cards.

…But I can’t wait to put together some fun Dragon-themed decks and see how they fare in the upcoming meta changes.

The first wing of Blackrock Mountain will unlock on April 2nd, if you’re the kind of person who is in to collecting the various card backs, you’ll want to preorder the new adventure for $24.99 right now to not miss out on that.

Everyone else? Well, you can just buy it with in-game gold when it’s released. If the previous leaks are true, it should unlock right around 5:00 PM Eastern time on Thursday.