A while back, I reviewed the original Five Nights At Freddy’s ($2.99), and while I could appreciate what it was doing from a clinical point of view, I didn’t really get the game properly. When Five Nights At Freddy’s 2 ($2.99) came out, I thought I’d step aside and let someone else take a crack at it, but with how busy the holiday season was, the game ended up falling into the dreaded TouchArcade sofa cushions instead. Before anyone could catch their breath, Five Nights At Freddy’s 3 ($2.99)’s release was imminent. I’ll own up to a couple of little quirks that I have. First of all, it really bugs me when I don’t get why something is popular. I don’t have to like everything, but I do like to understand points of view other than my own, and exploring them often leads to me finding new things to enjoy. I see it as a failing on my part when I’m not able to do this. Another odd habit of mine is that I don’t like gaps, so if I’m to come back to the series to review the third game, I really needed to do this one first. Hopefully, that explains why we’re running this review at an admittedly late stage of the game. You can expect a review of Five Nights At Freddy’s 3 pretty shortly after this one.

So it is with some hesitance that I am back on the job once again, tending the night security duties at a restaurant out of a child’s worst nightmare. To tell the truth, I still don’t like this game nearly as much as some of you do, but I think I get it a little better now. While the first was interesting from a design standpoint, essentially pitting you against your own paranoia, the game as a whole was totally reliant on that trick working. If it didn’t, you were just left with a very challenging game of red light-green light. That’s not without its charms, but there just wasn’t enough to do in the game if you weren’t pulled into its world. The second game could have easily phoned it in, tossing a few more story scraps while keeping the gameplay the same, but it hasn’t. There’s a genuine effort here towards advancing the gameplay while simultaneously filling out the lore of the world. 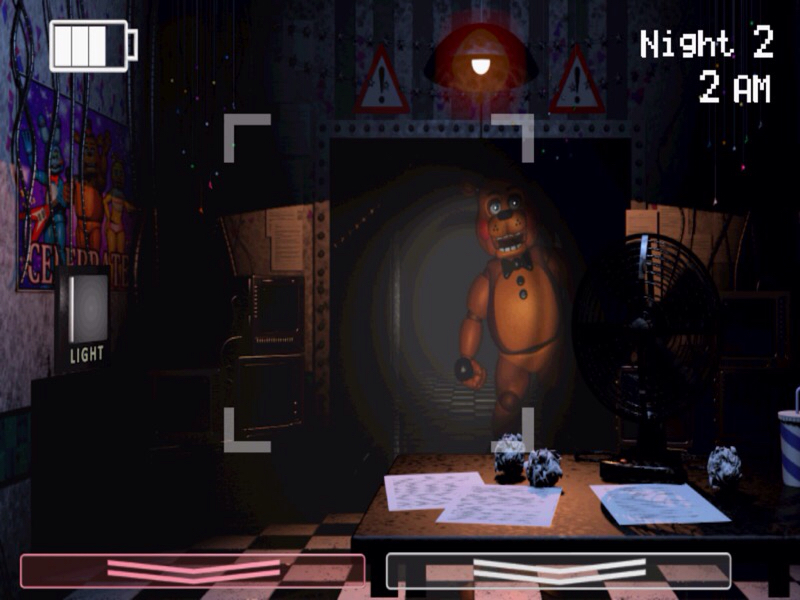 You once again play as a newly-hired night security guard for Freddy Fazbear’s Pizza, a Chuck E. Cheeze parody complete with a cast of creepy animatronic animal mascots. It’s those mascots who are the real stars of the show in this series, since they have this odd tendency to wander around at night and try to murder any human they see. Not out of malice, mind you, but because they mistake you for an endoskeleton without a suit. They’re simply trying to help you get back into a suit so as not to scare the children. That the suit is already occupied by circuity and machinery such that cramming you in there will kill you is hardly the fault of the adorable mascots. The first game featured five such mascots, while this sequel features eleven. Right out of the gate, things are a lot more complicated. You only need a working week on the job to beat the game, something that becomes more and more difficult with each night that passes. It’s all worth it in the end for that sweet paycheck, right?

As in the first game, you occupy the security office, a position you can’t leave even if you wanted to. You need to survive each night, which passes in a matter of minutes that feel like hours at times. Another employee will call you each night and deliver most of the game’s story along with the tips you’ll need to survive. Just try not to die, and if you can make it through, you’ll unlock a fun bonus mode There’s a lot more to juggle this time around. First of all, the restaurant isn’t on quite the shoestring budget the one in the first game was, so you don’t have to deal with limited electricity. Unfortunately, this particular restaurant doesn’t have the safety doors in the security room that the last one did, so anyone can just sort of walk in whenever they want. There are vents on either side of the room, and you can only keep an eye on one at a time. There’s also a big open hallway in front of you. The darkness of that hallway can only be penetrated by your flashlight, and that does have limited battery life. 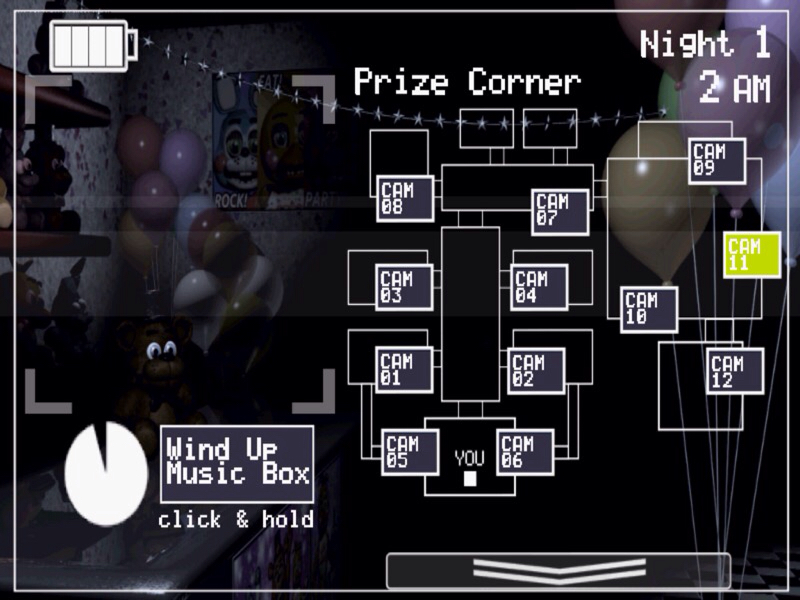 One thing you’ve got going for you is that you have an empty Freddy Fazbear head that you can put on, which will cause the animatronics to lose interest in you temporarily. Of course, there’s a catch. Two of the animatronics aren’t fooled by the head. One you have to stave off by flashing your flashlight down the hallway now and then, and the other requires you to keep a wind-up music box playing at all times. You can only wind the box by viewing the room it’s in on your security camera feed. Somehow, you can also shine your light from these feeds, and flicking it on and off at some of the characters will stop them for a short time. There’s a lot to juggle here. You have to take your eyes off of your immediate physical surroundings to wind that box, or you’re dead. You have to shine your light down the hallway from time to time, or you’re dead. But you’ll also need to frequently take cover inside the Freddy head, where you can’t do anything but silently watch and hope neither of those other two spinning plates come flying off in the interval.

With their increased numbers and more advanced AI, the animatronics are more dangerous than they were in the first game by leaps and bounds. Without the ability to seal off the room as in the first game, you are always vulnerable, as you’ll quickly learn after the first couple of nights. You have to make use of every trick in the book to make it through the game, and if you relax for even a moment, it’s often enough for the whole thing to come unglued. Mechanically, I’m much more satisfied with this game than I was with the first, though it does lose something by playing less at your anxiety in favor of a more direct threat. It’s a very tough game, perhaps too tough, but with how brief it really is, I think it’s quite acceptable to ask the player to make many attempts on the road to success. 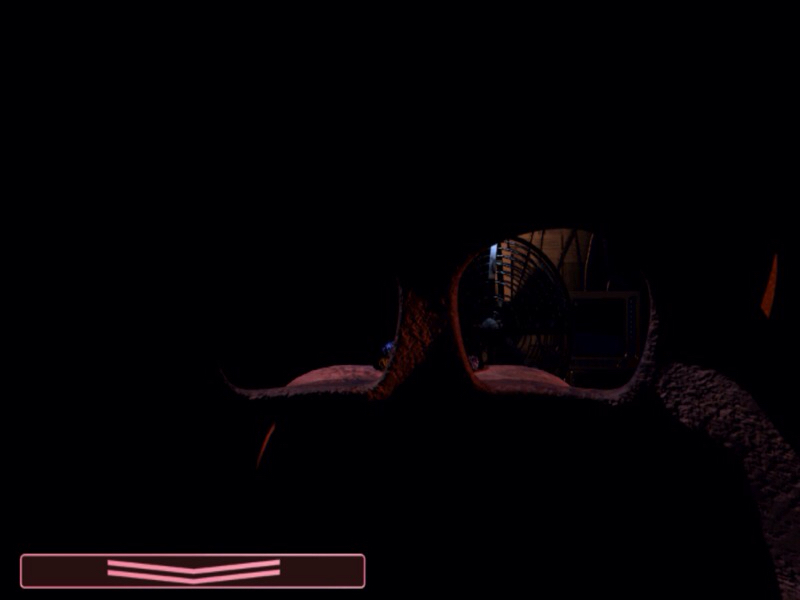 The story is a lot less subtle this time around, fleshing out one of the incidents that was only referred to in passing in the first game. It doesn’t really answer any questions, and it raises a few new ones, but there is a satisfying arc here that works as a standalone story and still ties in nicely with the original game. One new gameplay addition provides a lot of new information, though it doesn’t resolve much in this game. When you die, there’s a random chance you’ll be taken to a mini-game done up in graphics that look like they come from the Atari 2600 era. These mini-games aren’t really that fun from a gameplay point of view, but each one of them elaborates a little bit on the potential back story behind the malfunctioning animatronic mascots. Nobody expected the first game to explode the way it did, so it makes sense that the story was vague and largely undefined there. In the sequel, it feels like there’s just the right amount of mystery and illumination. It feels like one of the early Saw movies before the whole thing started going off the rails. It suggests plenty of interesting theories, and I want to know more.

Naturally, there are plenty of scares, too. It’s a bit more action-tense as opposed to paranoia-tense, but there are lots of jump scares, weird sounds, randomly moving objects that shouldn’t be moving, and so on. I approached this one properly and played in dark conditions by myself, and I will admit, it made me jump more than a few times. I even ended up turning my iPad over and dropping it at one point. They’re cheap scares, to be sure, but scares are scares. It’s dark and creepy, and the mascot head thing is actually kind of brilliant since you can often see the animatronics standing there through the eyeholes, uncertain whether you got the head on in time or are about to get a very unpleasant surprise. 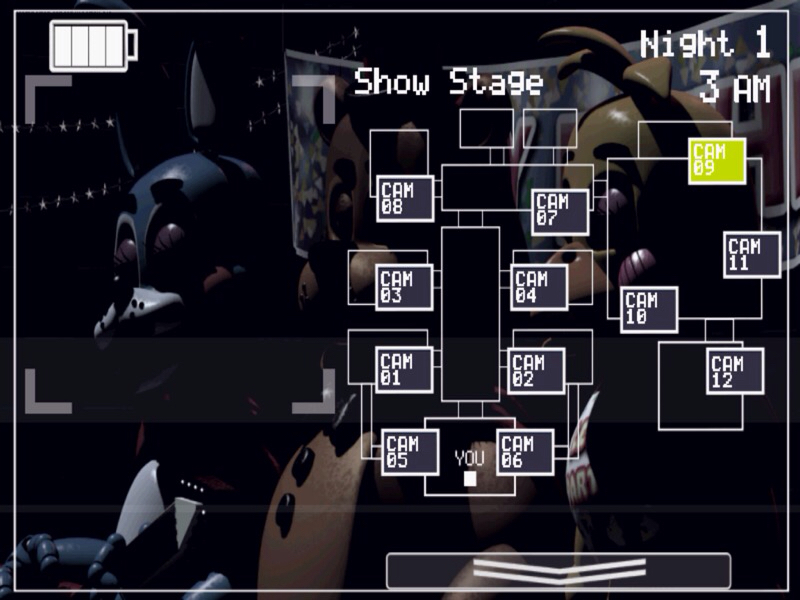 If you enjoyed the first game, Five Nights At Freddy’s 2 is a no-brainer purchase. It’s a better game in almost every respect, though its difficulty might turn some away. For all of its changes, it still feels an awful lot like the first game, though, so if you didn’t enjoy that one you probably won’t get much more out of the follow-up. I appreciate the more feverish pacing and the attempts to push out the concept a little better, but I can’t see myself ever going back to this again, and even the first experience with the game wasn’t exactly something I was in love with. Still, if you like a good jump scare and want a nice challenge, Five Nights At Freddy’s 2 has both in healthy supply.