Buzz Aldrin’s Space Program Manager (SPM) Road to the Moon ($9.99), developed by Polar Motion and published by Slitherine, was first released on PC and is now out on iOS. The iPad version had an eventful launch because of a bug that made the tutorial unplayable on iPad Air devices (in a demonstration of its efficiency, Slitherine quickly identified and fixed the issue). The game puts you in the role of the Director of NASA, the Soviet Space Agency (SSA), or the fictitious Global Space Agency (GSA) as you try to launch rockets, satellites, and humans into space — and, in the case of the US and Soviet campaigns, do so before the other side does.

In the spirit of the real space race, you get to risk millions of dollars, or rubles, worth of equipment and the lives of astronauts and cosmonauts in your attempt to be the first nation to take Earth photos from the Moon. Each turn takes one season, and every 16 seasons the government revisits your funding levels. For each mission that succeeds or fails, your “prestige" level increases or decreases, and that level directly influences the amount of money you receive each funding cycle. So, sometimes you’ll have to launch an ill-prepared mission hoping to get your prestige level high enough to get extra funding. This risk-reward system is a clever way by Polar Motion to force you to gamble and also to simulate the political demands actual Space Program Directors had to navigate. 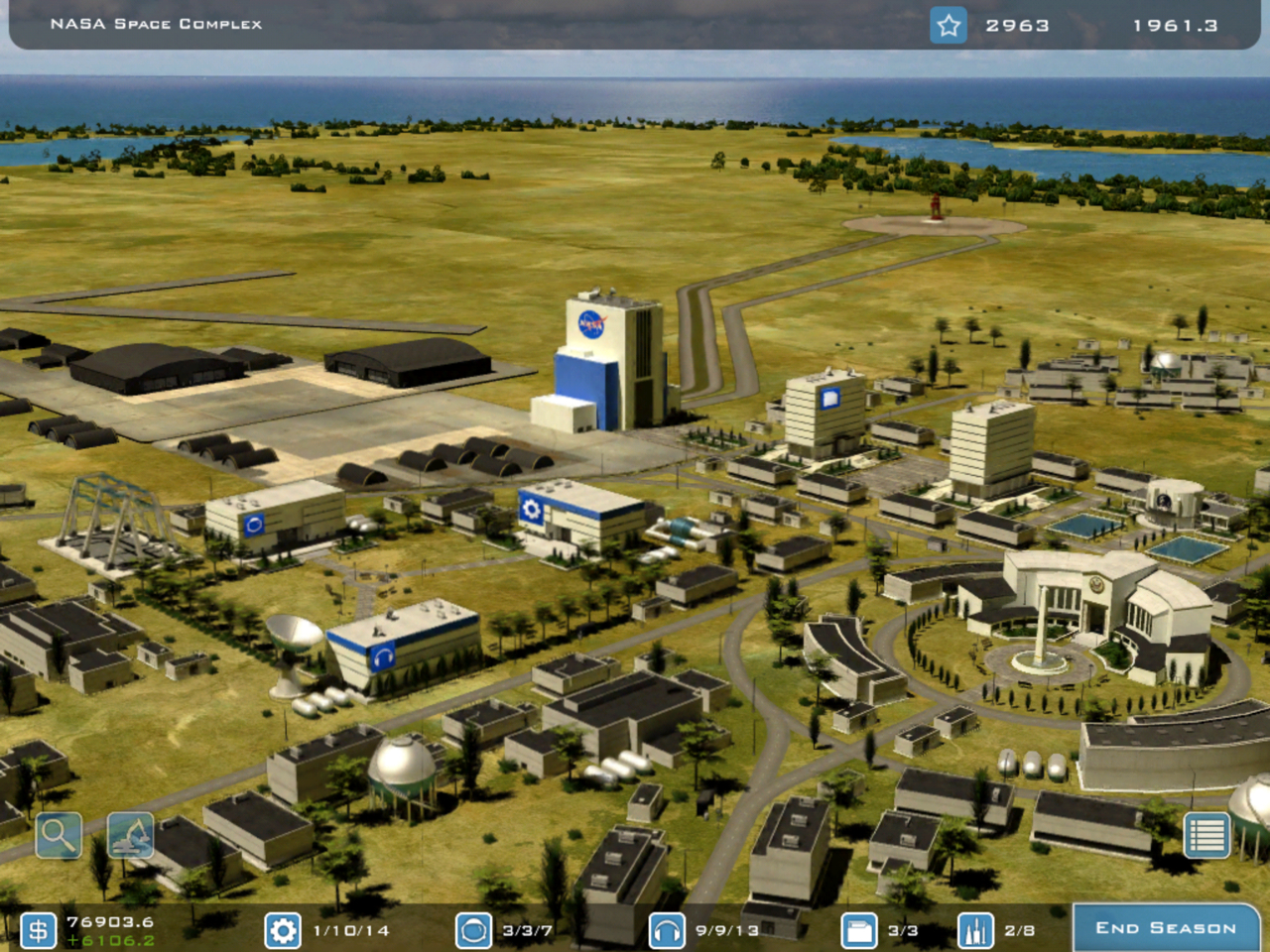 Visually, the game isn’t the prettiest, as some members of the forum have also pointed out, but I find the graphics adequate for a game of this genre. The UI consists mostly of a series of menus, submenus, and submenus of submenus. While the menus are well-organized, they all look a bit too similar. This would be fine if you didn’t have to go through most of those menus and submenus on every single turn, making their sameness painfully apparent. The text can also get tiring as it’s rather small and often hard to read.The music isn’t great either, with one theme for each agency playing on a loop. The good thing is that you can turn the music down in-game and, instead, enjoy your choice of period-appropriate tunes.

There’s quite a bit of content in SPM that more than justifies the game’s $9.99 price tag. You can play a campaign as NASA, the SSA, or GSA. If you pick either of the first two, then you are racing for the Moon. The GSA campaign is, instead, a race against bureaucrats as it’s all about meeting short-term goals set by the government. In addition to the campaigns, there’s a sandbox mode for each agency that offers a more open-ended experience. All these modes come in three difficulty settings. 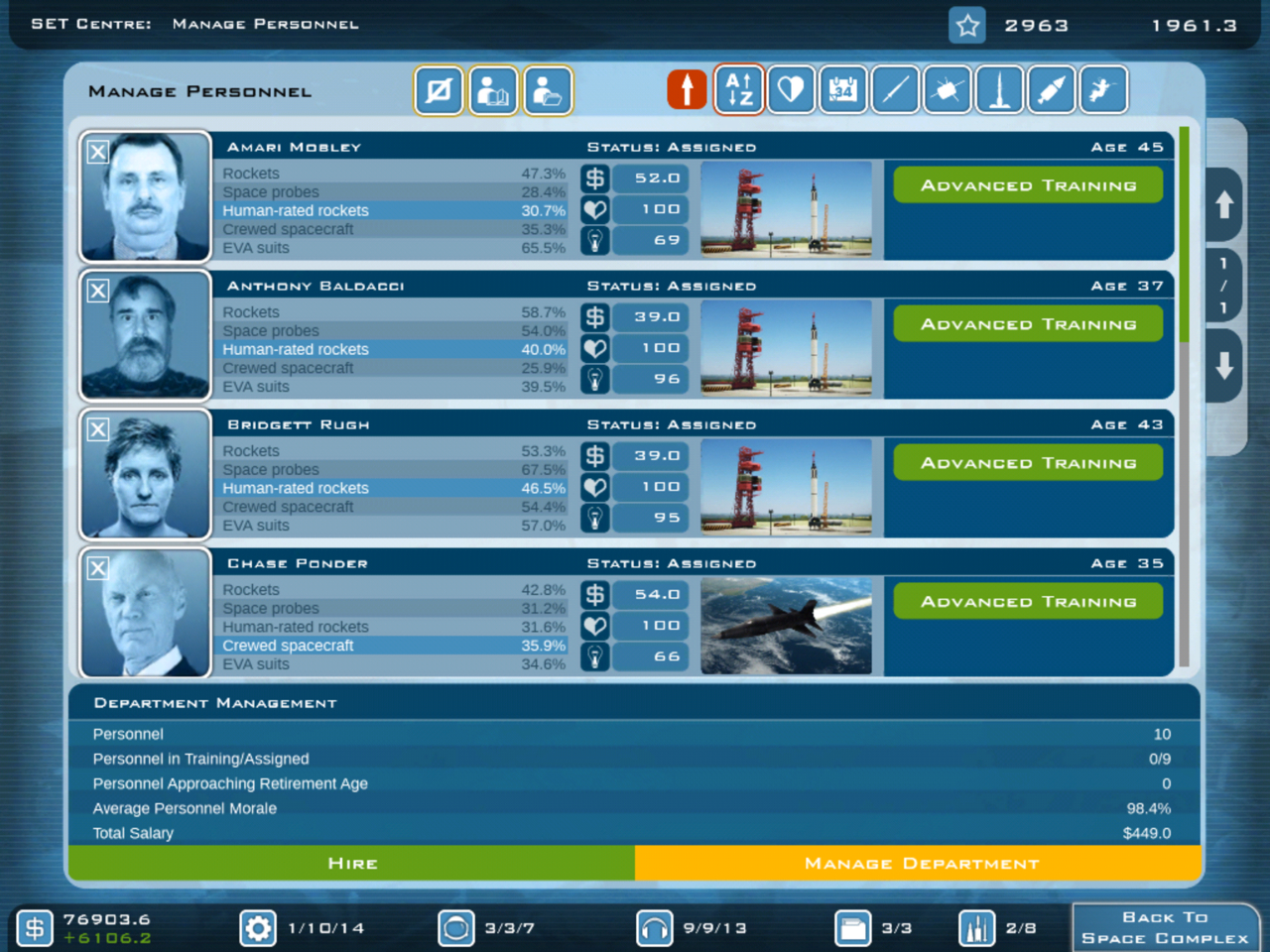 The game starts you off with a lengthy, but quite necessary, tutorial in which Buzz leads you from constructing the first Mission Control Center to launching the X-15, the world’s first operational spaceplane. By the time the X-15 has safely landed back to earth, you’ll have opened various space programs, hired technical personnel to work either in R&D or at your shiny new Mission Control Center, and hired astronauts and cosmonauts willing to risk their lives to see their house from space.

Now, this wouldn’t be a management game if you didn’t have to deal with planning the component development and staff training for maximum efficiency in minimum time. As the Director, you’ll constantly have to decide which programs to open and when to send your staff and astronauts for training. There are many choices to make as you are trying to coordinate numerous space programs each with a number of mission configurations (smaller development steps). 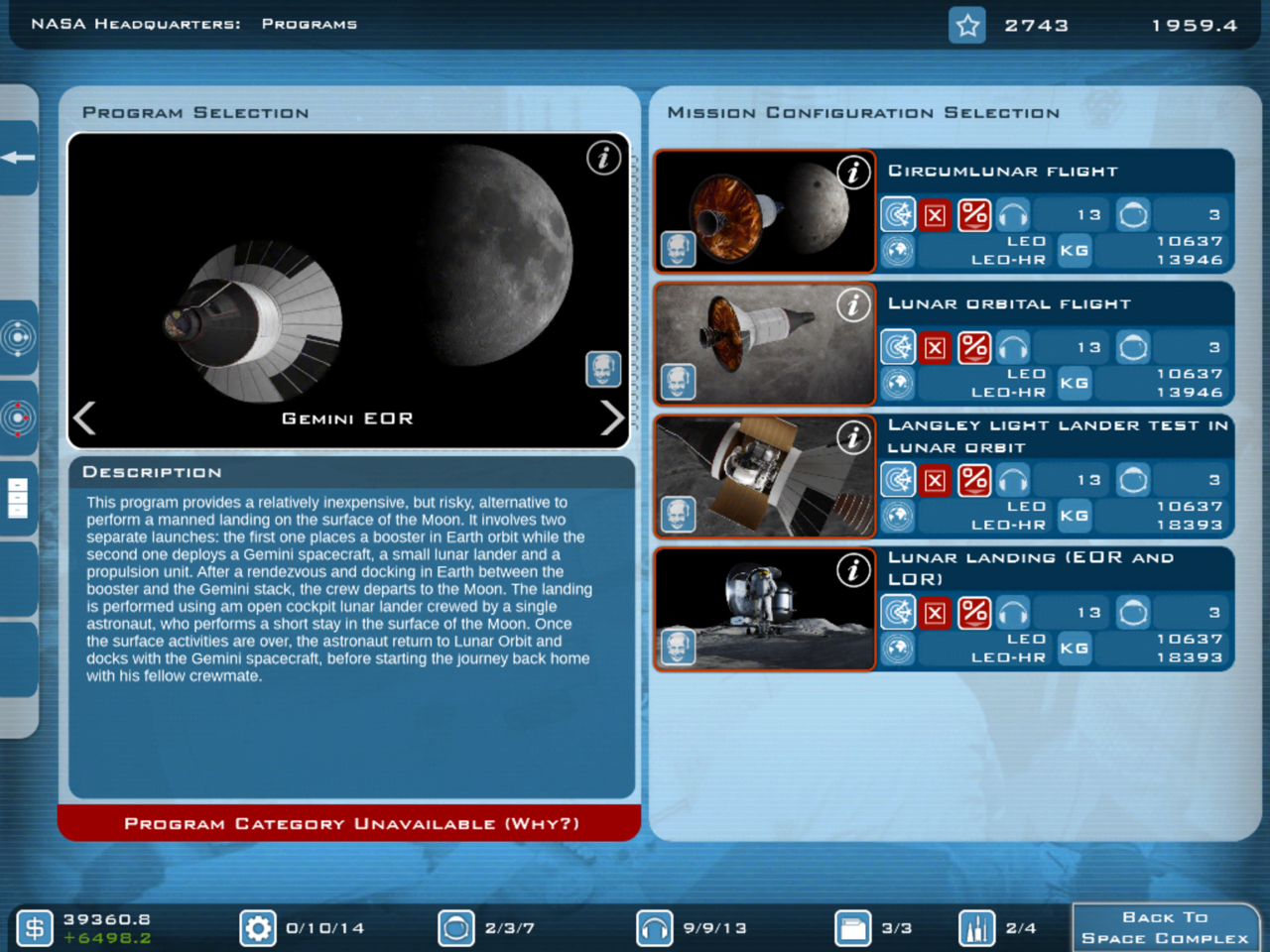 However, and here’s the fun part, you can skip most of the mission steps, but if you skip one to save time and money, you’ll increase the possibility of the next mission step failing. Combine this with how equipment reliability increases each season, and it’s decision time: do you push now and hope to get lucky and not kill anyone, or do you ensure mission success, which gets you prestige and money, but risk seeing you competitor’s rocket soar through the sky while you sit on Earth sipping drinks Mad Men style? Add the need to repeatedly upgrade your spaceport facilities to hire more staff, and the game gets pleasantly hectic.

When it’s time to see whether you can actually put anything into space without it exploding, the game shifts to Mission Control mode. Here you get to watch each mission step all the while hoping that rushing to launch at only 75% component reliability won’t end in a fiery failure. The missions are presented as animated sequences that show each mission step. What’s missing, though, is the tension inherent in early space exploration. The steps go by way too fast to create any real tension both when the mission succeeds and when it ends in a free firework show. 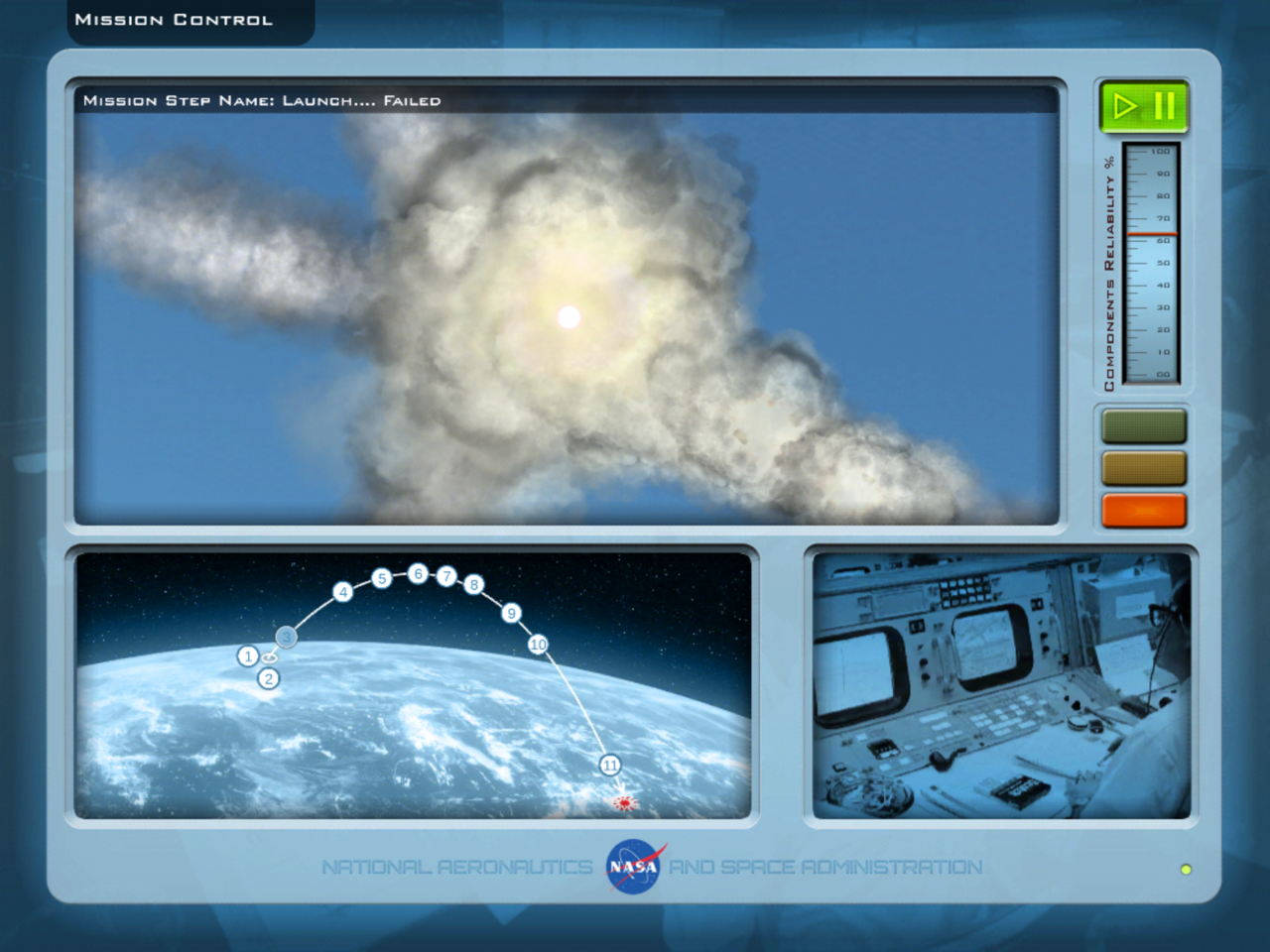 The way SPM handles the actual race between NASA and the SSA is my biggest issue with the game: it just doesn’t feel like that much of a race. Yes, the game gives you news bulletins that let you know when the other side has made a significant step in the race to the Moon, but they are too brief. The primary way to compare the two competitors is the Goals Comparison screen, but it only displays landmark achievements like putting a satellite into orbit. I would’ve liked to be able to peek through the Iron Curtain a bit more to see what my competitor was up to, even if historically such information wasn’t available because of the Soviet’s secrecy.

Even playing the campaign against a friend on multiplayer mode doesn’t make the race much fun. Slitherine uses its cross-platform PBEM system, which requires a Slitherine account, but in the age of iOS 8 and of games like Galaxy Trucker, with their abundance of multiplayer options, SPM feels really dated. Add to that the fact that the competition part of SPM is probably the single player mode’s weakest feature, and you are left with a relatively uninteresting multiplayer game. Maybe a hot-seat mode would’ve made the multiplayer more interesting, but even then I’m not so sure.

Even though the game doesn’t offer the excitement of the space race to the degree I was hoping for, SPM is quite an enjoyable management game, especially for those with even a passing interest in space exploration. In addition to its replay value because of the variety of game modes, SPM also offers an abundance of information about the period’s space programs and hardware in its aptly-named Buzz-opedia. If you enjoy relatively deep management games and have even a passing interest in science and space, then this is definitely a game you should check out.