Even today, it’s rare to see a developer’s name affixed to a video game title. There are a lot of reasons for that, depending on which period we look at, but one of the bigger exceptions to that is the name of Sid Meier. I’m not sure how or why his name ended up in the title of Sid Meier’s Pirates! ($2.99), but it might have simply been to help make the somewhat generic title more unique. The game was a massive hit, and while publishers generally don’t like to canonize developers, they’ll make an exception for just about any rule if the money looks right. So it is that after just a few more games, nearly every game Sid Meier had a hand in, and a few that he didn’t, carried his name. It’s an odd outcome for someone who seems to be a relatively low-key guy. The problem with his name becoming a brand, however, is that you can’t be too sure with any given release just how much of the game is Sid Meier the designer versus Sid Meier the marketing tag.

There’s no question of that this time. Sid Meier’s Starships ($2.99) has the veteran game designer’s fingerprints all over it. At its core, this is essentially a mash-up of Sid Meier’s Ace Patrol (Free) and Civilization Revolution ($2.99), games that are both quite familiar to iOS strategy fans. Its design leans more heavily on the former than the latter, but those who found Ace Patrol to be just a bit too slimmed down will probably find Starships more to their liking. Though this takes place in the same setting as Sid Meier’s Civilization: Beyond Earth, don’t expect complexity on that level. You commandeer a small fleet of ships, traveling through the stars to different planets. Every planet has some problems they need you to solve, and by doing so, you increase your affinity with them. Help them out enough and they’ll join your federation, increasing your available resources and inching you ever-closer to victory. Of course, your rivals are trying to do the same, and while you can make peace treaties with them, you’re not going to be able to win if you make friends with everyone. 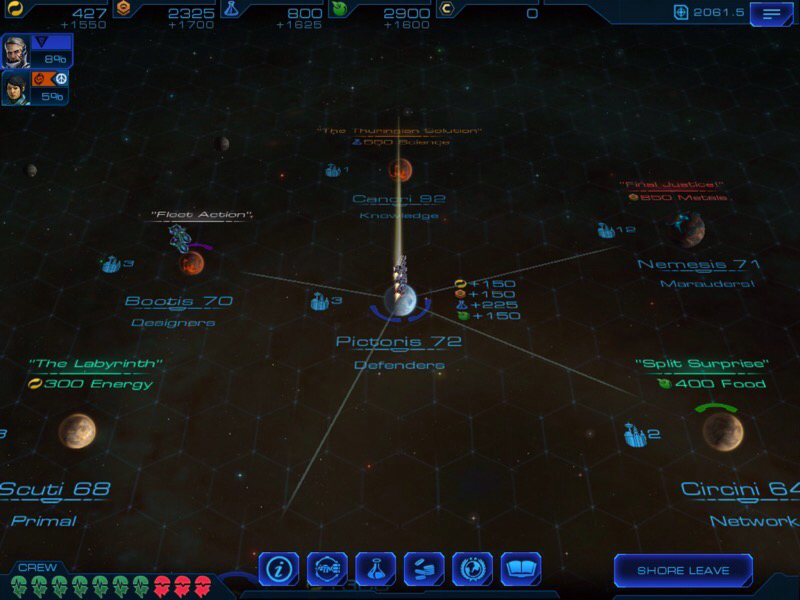 Along the way, you can spend your resources improving your fleet of ships. You can use energy to buy new ships and power-up their weapons, armor, and special moves. You can use science points to research new technologies that convey various benefits to your entire fleet. There are even wonders to build, in fine Civilization tradition, though they too tend to serve the sole purpose of powering up your fleet. You can also build cities on any planets you’ve occupied, but the main point of that is to increase resource production so that you can, you guessed it, make your fleet stronger. While the game certainly seems to be pushing you towards the route of destroying your opponents, you can win in other ways. Just like Civilization, you can win by advancing your technology far enough, building a certain number of wonders, ruling a majority of the population, or that whole destroying everyone else thing if you’ve really got your heart set on it. Whichever way you choose to win, there’s going to be a lot of fighting, though.

The battles are instantly familiar if you’ve played Ace Patrol. Sure, it’s in space, and you can’t pull off any fancy dogfighting moves, but your ships have some special tricks of their own. Plus, since space has a lot of stuff in it, you can actually take cover during battles here. There are different weapons for long- and close-range, a cloaking ability that completely blows the AI’s mind even on the highest difficulty, sensor scans for detecting cloaked enemies, and torpedoes that are also pretty good for breaking the game once you get the hang of them. While you typically play the battles from an overhead perspective, the camera pans and zooms whenever you take a shot so that you can get a more cinematic look at your sweet Kirk skills. If you haven’t played Ace Patrol, you can expect fairly typical turn-based strategy combat here. You move all of your ships, then the enemy gets to go, and so on. Different missions will have different goals, including escort missions, survival for a set number of turns, sending you after a particular target, and so on. The maps are fairly large, and there are interesting features like wormholes that send you around to another spot instantly.

A single-player strategy game is only as good as its AI, though. That’s one area where Starships could use a bit of help. While the AI is competent enough outside of combat, it’s a whole other matter in the battles themselves. As mentioned, the computer really has no idea what to do with stealth for most of each game. It almost never makes proper use of its sensors, so if you want an easy win, just pour everything into stealth. The computer also has issues with torpedoes, and a well-placed volley of them in your first turn can often get you more than halfway home in one fell swoop. These problems persist regardless of the difficulty level you choose, so unless you intentionally limit yourself, a lot of the fun of the game will be spoiled. It’s still engaging enough and cool to look at, but strategy veterans are going to chew this game up and spit it out fast. 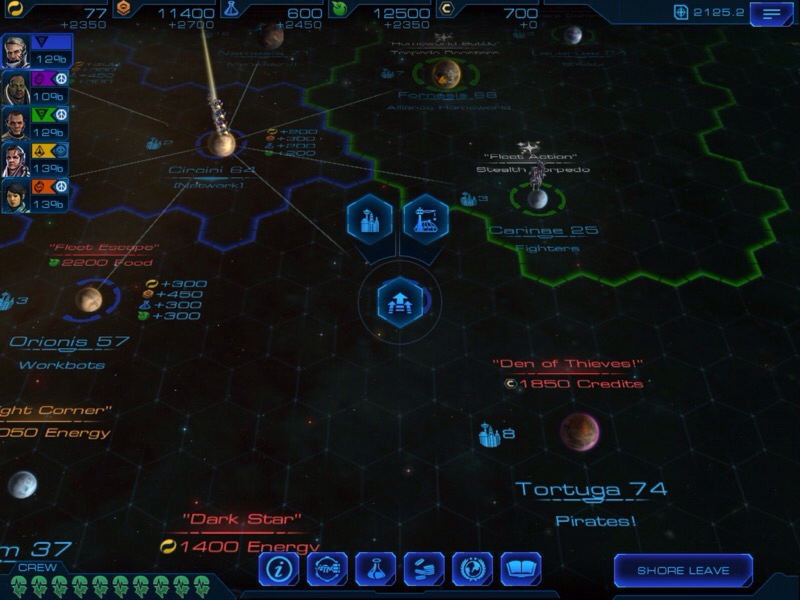 With that relatively major flaw in mind, I still like Sid Meier’s Starships an awful lot. In fact, I think it’s my favorite Sid Meier title available on the App Store. The theme really hits home for me, even though it’s essentially just Civ In Space, and while the AI has holes big enough to drive a starship through, there’s nevertheless a certain pleasure to be had in the rhythm of the gameplay. Building up your fleet both in quantity and power is a lot of fun. Each upgrade adds a little to how the ships look, so you get a very tangible feeling of becoming more powerful. The random nature of the maps means the game is a little different each time you play, and the presentation is simply excellent aside from little quirks like background objects showing through foreground objects during the cinematic cuts. It’s the kind of game you could easily curl up in your chair with and lose track of hours. Challenging AI or not, that’s a great thing to be able to say about a game.

If you enjoyed the battles in Ace Patrol but wish there was a bit more to chew on between fights, you’ll probably enjoy Sid Meier’s Starships an awful lot. It’s also an easy recommendation to anyone looking for an accessible strategy game with a sci-fi theme. For whatever reason, space sims tend to be among the most complex examples of the genre, and that can be intimidating for a lot of people. Starships is about as friendly as a strategy game can get. The game will practically play itself if you keep asking for hints. However, it also has just enough depth to it to keep you coming back for a while, trying out all of the different variables and going after all the different victory conditions. Veteran strategy fans with hardcore tastes will probably find the game a bit too light, though, and the lack of multiplayer and flawed AI keep it from being all that it might have been. Even with its failings, I still think it’s a good game that may not live up to the highest standards of Sid Meier’s name, but certainly doesn’t tarnish it.