One of my most-played Steam games over the past year-and-a-half has been Nuclear Throne, Vlambeer’s dual-stick shooter action-roguelike. It’s challenging, has fantastic art, is highly replayable, and has no shot whatsoever of coming to mobile. The controls are a huge hindrance because there’s aim-and-fire controls, and only a more deliberately-paced game like Space Marshals ($3.99) can pull that off. Plus, if control issues will keep Vlambeer from releasing Luftrausers on mobile, Nuclear Throne ain’t happening. So, I find myself mostly wanting for a similar experience on mobile. While it’s not quite on iOS yet, and it’s a bit of a different game, Future Factory could just fill that void later this year. 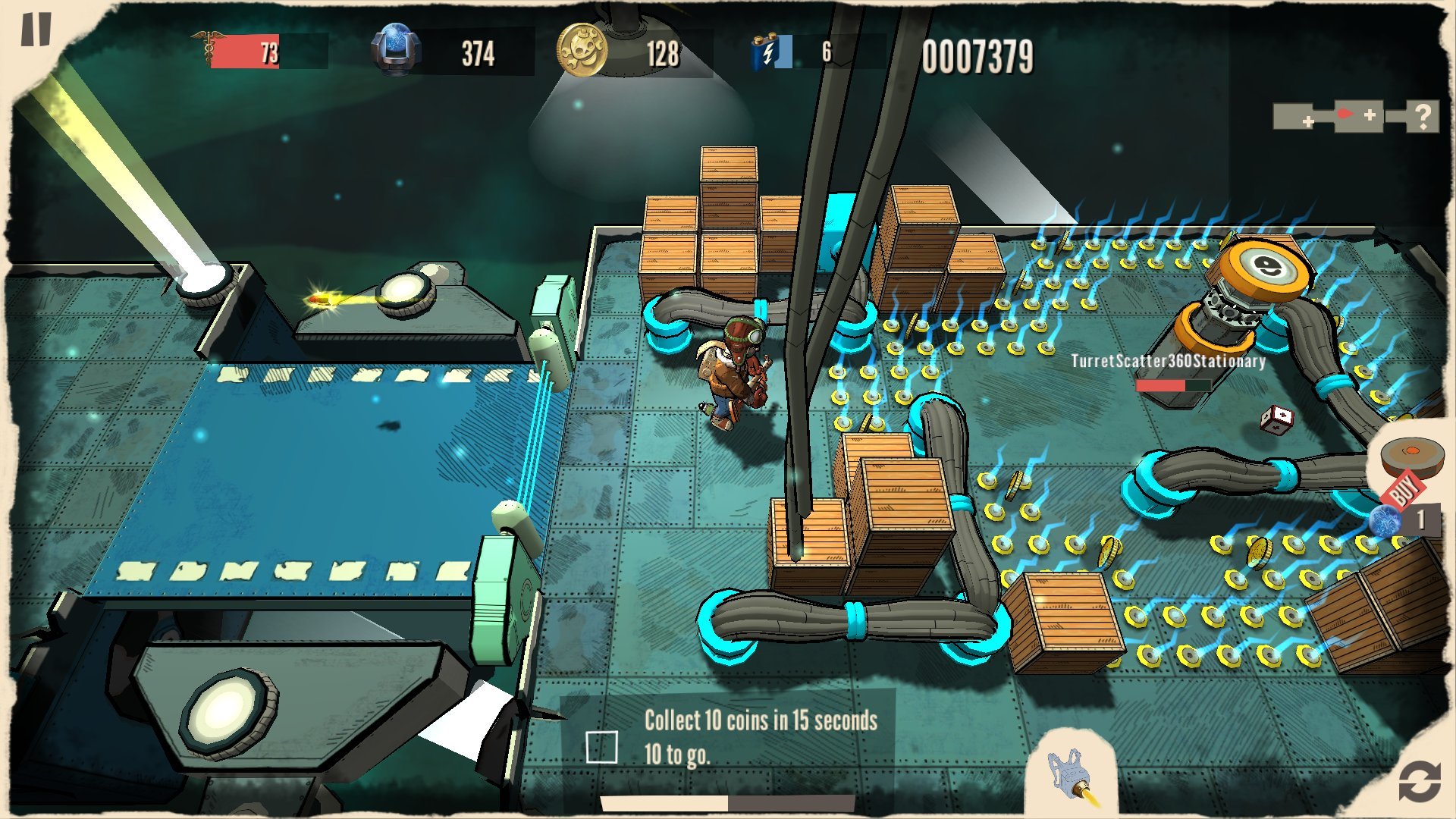 This is a dual-stick shooter where you’ll have to advance through multiple levels of a factory, with each level requiring you to beat more stages on your one life in order to proceed. The maps are randomly generated, and separated into different square rooms that you can go into, with enemies to take out before new paths open up. There are also challenges that can earn you additional money, like killing an enemy in one blast, or taking out everyone before a certain amount of time expires. There’s a boss fight at the end of each floor, involving robot bears and giant flying brains. Thankfully, I haven’t seen both go after me at the same time.

You do have weapons that you can use, from an automatic gun that you fire with the right stick, to tools like landmines and jet boots that you can buy, with mines requiring energy, a resource you can pick up throughout the levels, to deploy. Avoiding damage and staying alive is key, as dying costs hard currency in order to come back, and at ever-increasing costs. So, be smart, and upgrade your health and armor.

Future Factory is going to be free-to-play, and I imagine that along with some gameplay tweaks when it launches, costs and whatnot will be changed as well. Those looking for a pure roguelike experience may be let down by that, unless the game does go paid, but there’s plenty of motivation for people to spend money. But also, upgrades for most items are cheap in terms of soft currency, and tweaks in terms of costs and availability will obviously be made. 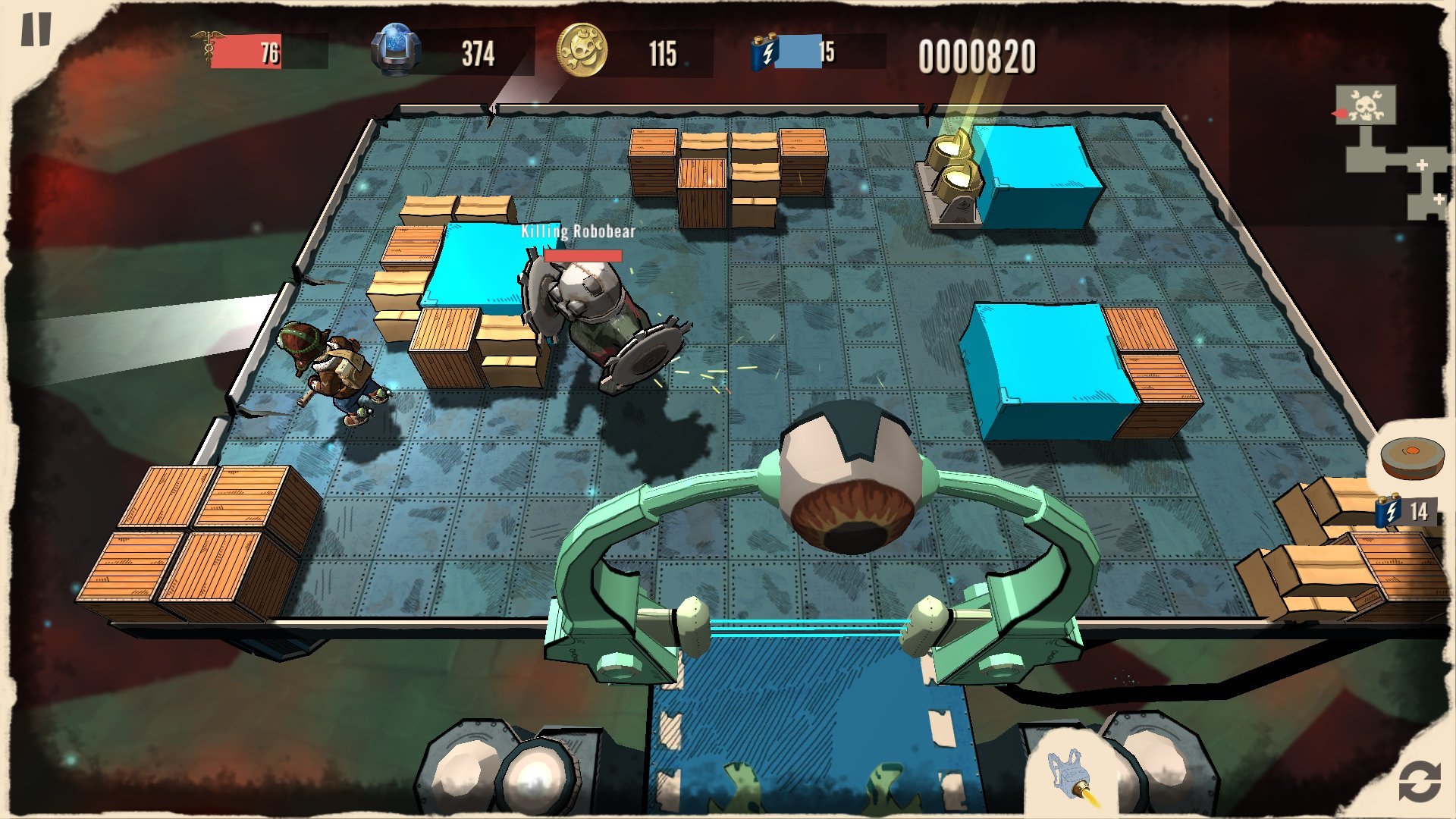 I’m excited for this to eventually release on iOS because it really does scratch an itch that games only on PC have done for me. There’s some interesting scenarios as you navigate the levels, not quite knowing what’s next, and the combat is smart, requiring you to dodge bullets and fire from smart positions. The mines are fun to use, and having them be tied to energy (or to hard currency) means they have to be used smartly. Plus, the game’s whole aesthetic feels like Borderlands meets Bioshock ($9.99) and steampunk, which is a pretty neat combo.

Keep an eye out for Future Factory, it could prove to be one of the cooler games this year if the developers keep working on it, tweaking and smoothing out the gameplay and monetization in advance of its worldwide multiplatform launch.