Who’s ready for chimichangas? To celebrate the arrival of Marvel’s biggest star to PlayNext’s X-Men: Battle Of The Atom (Free) card battle game, Deadpool has had his agent set up a one-of-a-kind deal for all his fans. For a limited time, you can get Marvel Pinball ($0.99) from Zen Studios for free. That stand-alone app comes with the table based on the Avengers movie, and it’s the only way to get the Spider-Man table for reasons. Spidey’s agent just isn’t as good as Deadpool’s, I guess. Maybe you’re a fan with discerning tastes, though, and you think that goofy webhead is just a zero-calorie version of everyone’s favorite merc with a mouth. Well, Papa Deadpool still has something nice for you. For an equally limited time, almost* all of the Marvel tables in both the Marvel Pinball app and Zen Pinball (Free) are on for half-price. That’s just a dollar per table! 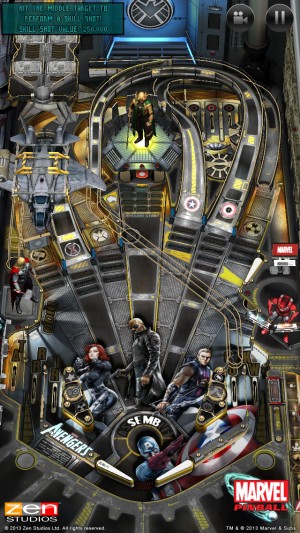 Marvel Pinball has been free before, but IAP sales are a bit more rare, so you might want to stock up while you can. There are 17 tables in all, featuring big characters like Wolverine and lesser-known ones like Ghost Rider. Opinions vary on them, but my favorites include Blade, Fear Itself, and Moon Knight. Oh, and Deadpool, of course. I would never forget that one. One heads-up: unlike some other versions of Zen Pinball, tables aren’t cross-buy between the Marvel app and the main one, so you’ll have to decide which one you want to make your purchases in. Or buy all of them for both, since it would only cost the same as usual right now. I think Deadpool gets a percentage if you do that!

If you’re interested in X-Men: Battle Of The Atom, they’re also holding an event for this promotion. You can collect special Deadpool Pinball cards until March 25th. They’re extra-rare, so if you keep them in mint condition, you might be able to sell them one day to pay your kid’s college fees! Well, okay, there’s absolutely no chance of doing that, but at the very least, they’ve got some great artwork on them, right?

* Venom is a primadonna, so arrangements to discount his table couldn’t be made. – Smilin’ Shaun